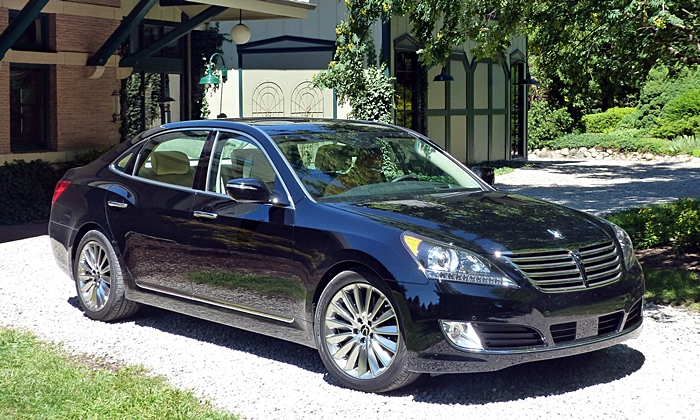 Why do people buy large luxury sedans? If it's for prestige, then one from a mainstream brand at a lower price doesn't compute. But if the nameplate's cachet (or lack of it) truly doesn't matter, is the revised-for-2014 Hyundai Equus the smart buy among large luxury sedans?

Hints of Buick in the swage line that undulates along the fenders. more Equus photos 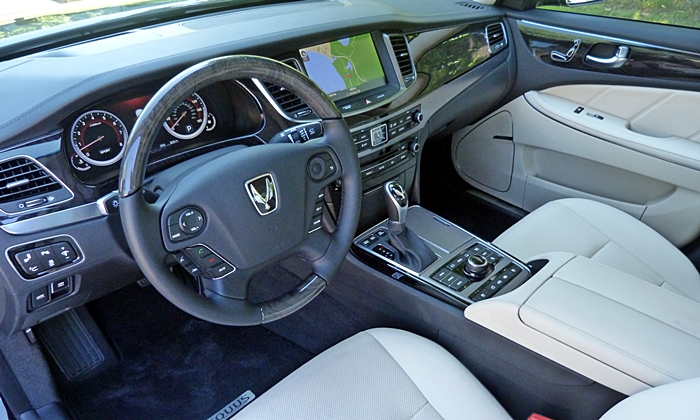 Far and away, the predominant reason to buy a Hyundai Equus is its price. Not that it doesn't do well in other areas, but the Korean auto industry's flagship undercuts its direct competitors by such a large amount that no other difference begins to compare.

Using TrueDelta's default values, these features are worth about $3,700, a little over half what Hyundai charges for them. But they might be worth $7,000 to you. BMW charges about the same amount for them, so the comparably equipped price difference isn't much affected. The Lexus when configured to match the base Equus already has most of the Ultimate's features, though. so in that case the price difference falls to $23,370. Adjust for remaining feature differences and the better-equipped Hyundai's advantage rebounds back over $25,000.

Notably, Cadillac and Lincoln no longer offer a large, V8-powered, rear-wheel-drive sedan. Which is more than a little ironic, since this used to be the only sort of car Detroit offered.

Hyundai touts that, because the Equus (like all large luxury sedans) sells in low volume, its dealers can provide better service to Equus owners than luxury brand dealers can for their much larger numbers of customers. The most noteworthy example: Hyundai dealers will pick your car up and return it when it needs to be serviced. Owners do not need to visit the dealership.

Of course, if they actually visit the dealer the Lexus store will look much nicer and will pamper them much more. 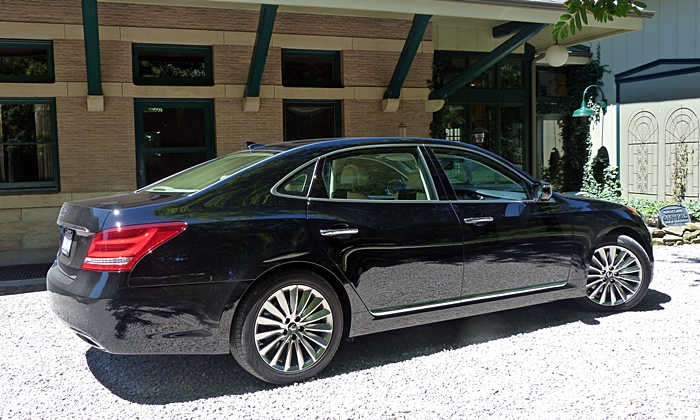 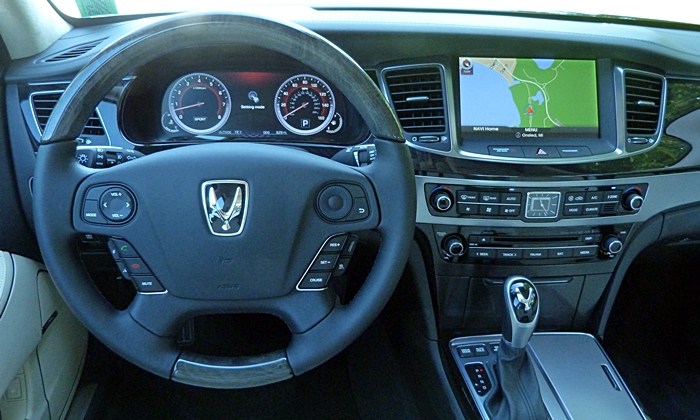 Ultimate gets full LCD instrumentation for 2014.

Luxury cars have longer warranties than regular cars, but Hyundai's basic warranty is a year longer still, 5/60 rather than 4/50. The original owner also enjoys a 10/100 powertrain warranty.

Likely to be of greater significance: Hyundai tends to be more strict when determining whether a repair is covered. Things considered to be wear items or adjustments are covered for only 1 year, 12,000 miles.

The Equus's standard 17-speaker Lexicon audio system ranks among the best I've ever experienced, with striking clarity and immersive sound at just about any volume. While the optional Mark Levinson system in the Lexus sounds nearly as good with the volume cranked, at lower volumes the front center speaker drowns out the others.

The #1 reason not to buy a Hyundai Equus is as obvious as the #1 reason to buy one. Hyundai doesn't have nearly the prestige of Lexus, much less the hallowed marques of Europe.

As noted when discussing pricing, the Equus has perhaps the most extensive standard features list of any car under $100,000. But you can't quite get everything.

Most notably, you can't get all-wheel-drive, which is ordered on nearly half of all large luxury sedans in the U.S., and the great majority of them in areas with snow. And, while the car's steering and suspension have a sport mode, there's nothing like the high-performance variants offered by most competitors, or even sport seats. The Equus just isn't that sort of car. 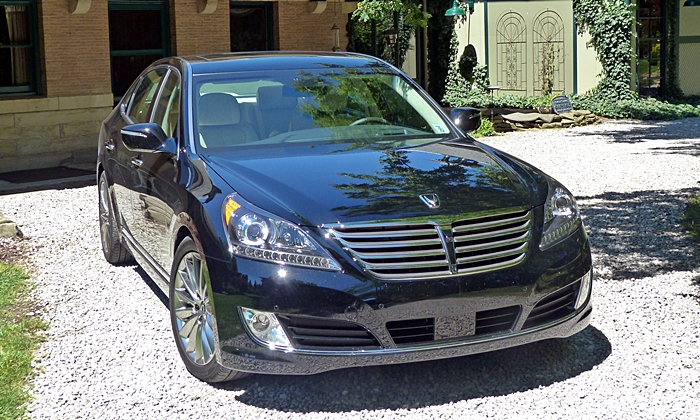 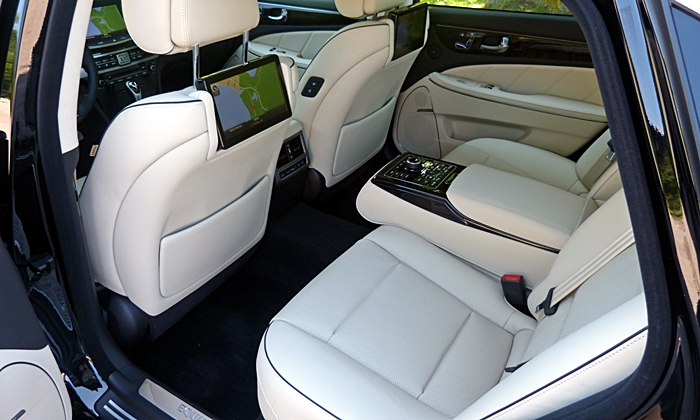 In the Ultimate, rear seat passengers can program and view the nav system.

Hyundai has improved the handling of the Equus for 2014. Most appreciated: the stability control doesn't cut in as early or as aggressively. An enhanced sport mode now makes a noticeable difference in how the car steers and handles, but no one will consider the resulting dynamics sporty. Just less pillowy. Much the same can be said of the LS 460 even in F Sport form. Either car behaves fairly well when hustled. With sophisticated multi-link suspensions and nearly balanced weight distributions, the fundamentals are present. But either also seems out of its element in the process. With less insulated steering systems and more athletic suspensions, European competitors can be much more fun to drive.

Hyundai upgraded the interior of the Equus as part of the 2014 revisions. The new instrument panel appears more upscale and up-to-date. But its styling remains understated (a good thing for some potential owners) and its improved materials, especially the switches, still aren't quite up to those in competitors. This said, not everyone will notice a meaningful difference, so check the car out for yourself.

The downside of the Equus's big, naturally aspirated V8 is that it uses more gas than the smaller engines in competing cars. In the EPA's tests, the Equus rates 15 mpg city, 23 highway. The Lexus does a bit better, 16/24, while the Audi A8 4.0T manages 16/26 despite the additional mass and drag of all-wheel-drive.

Audi and BMW now also offer their large luxury sedans with boosted V6 engines that are plenty quick yet much more economical (19/29 for the BMW 740Li, 18/28 for the all-wheel-drive Audi A8L). The best of them all: the 24/36 diesel-powered Audi A8 3.0 TDI. With the Equus, a big V8 is the only available engine.

For 2014, Hyundai has removed chrome trim strips from the bumpers and mildly de-blinged the grille. The 2011-2013's chrome-plated wheels are also gone, replaced by "premium finish" (i.e. brightly painted) alloys with a more sophisticated design. While these changes help the Equus appear a little less stodgy, its exterior styling remains less striking and less distinctive than others in the class.

Then again, few people are fans of the "spindle grille" that now distinguishes the Lexus LS. People seeking a convervatively styled (yet short of fusty) large luxury sedan might well find the Equus the most attractive of the bunch.

The Hyundai's driver seat is worthy of a large luxury sedan. But those in the Lexus and most other competitors are more cosseting, and most also provide more lateral support in turns.

I said "driver seat" and not "front seats" because the front passenger seat does without any lumbar adjustment, usually standard in this class of car. I suspect this is because the car was designed for the Korean market, where its owners usually ride in the back seat. If the seat fits your co-pilot's lower back perfectly anyway, then no harm, no foul.

The steering wheel of the Equus doesn't tilt down as far as I would like. To compensate, I raised the seat a little more than I would have otherwise. Otherwise, the driving position is excellent thanks to styling that doesn't try to be swoopy and futuristic (no steeply raked windshield to necessitate an ultra-deep instrument panel).

The rear seat of the 2011-2013 Equus Ultimate included a right side power legrest. But as roomy as the Equus is, there wasn't enough space in back for anyone much over 5'6" to use this legrest. Partly for this reason, few owners actually used it. For 2014 it's gone.

The rear seat itself is quite comfortable. But as in many large luxury sedans, there's not enough space beneath the front seats of the Equus for the rear passengers' feet, reducing usable rear legroom by a few inches. But also like in other large luxury sedans, the people in both rows must be quite tall for this to become a factor. Of greater consequence: my feet did not meet the rear floor at a comfortable angle, so I was only comfortable when sitting with my ankles crossed. Footrests would be much more welcome than the discontinued legrest ever was; Hyundai should consider adding some.

The combination of a smooth, lusty 429-horsepower 5.0-liter V8 engine and eight-speed automatic transmission can launch the Equus from a dead stop to 60 mph in under six seconds. Wheelspin can be provoked all too easily. This is about average for the class. The 386-horsepower 4.6-liter Lexus isn't quite as quick, but some others with turbocharged V8s are even quicker.

Of course, this sort of car rarely needs to accelerate so quickly, but it's there if and when you need it. And when you don't, the powertrain effortlessly accelerates the car.

The Equus is first and foremost a luxury car, designed to be ridden in more than driven. So it had better be smooth and quiet, and it is in the way that only a large rear-wheel-drive sedan can be. Some smaller sedans are about as quiet, but they don't feel as substantial or, partly for this reason, as luxurious. I wasn't able to drive the Equus and LS 460 back-to-back on the same roads. The Lexus might remain smoother and quieter, but if so the difference isn't large.

My apologies if you were hoping for some surprises. With the Hyundai Equus, what you see is pretty much what you get. It's not a sport sedan. It is a very good luxury sedan. A sub-$70,000 price makes it a relative bargain, nine-tenths the car for three-quarters the price. But the brand lacks prestige. With some things people tend to insist on an "authentic" label. Large luxury sedans are one of these things. But for people who truly don't care about the label, but who do care about luxury and features, the Equus seems a smart buy. 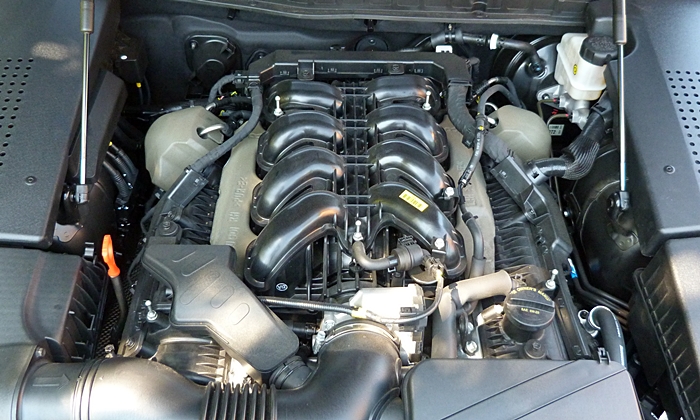 Clean this up a little, and there'd be no need for the cover. 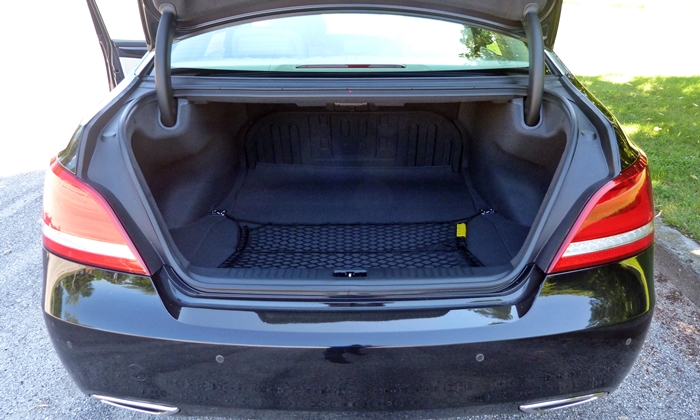 Not the largest, but plenty large.

Hyundai provided cars and lunch at an event for invited media. Lexus provided an insured LS 460 for a week with a tank of gas.

More About the Equus 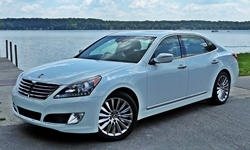 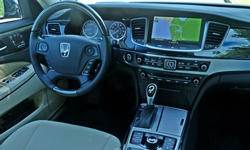