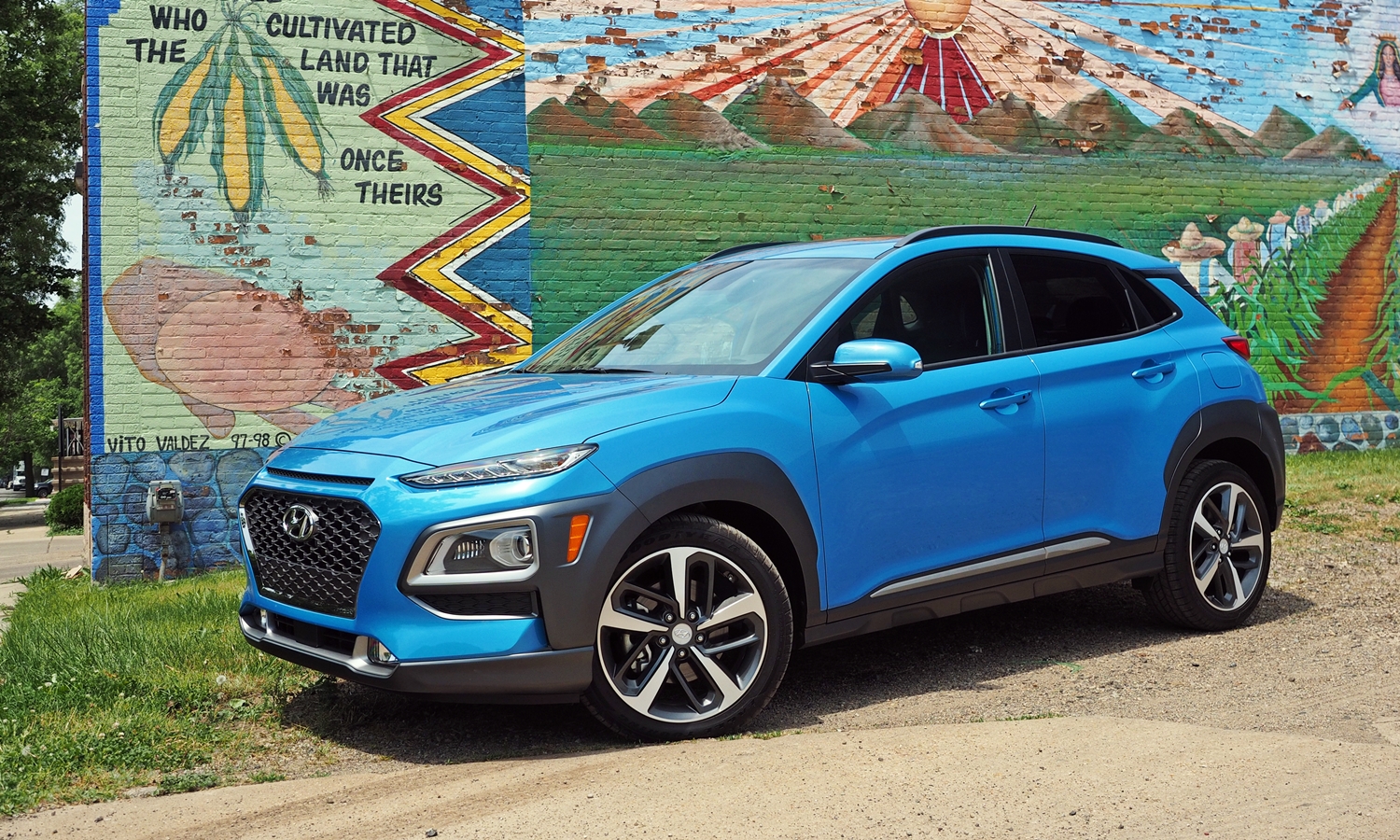 The new Hyundai Kona isn't such a car.

The latest of a growing number of subcompact crossovers, the Kona dramatically outperforms a Honda HR-V in some ways while falling well short in others. Could it be the right small crossover for you?

I usually don't care for cladding around the wheel openings, but feel it works here. more Kona photos 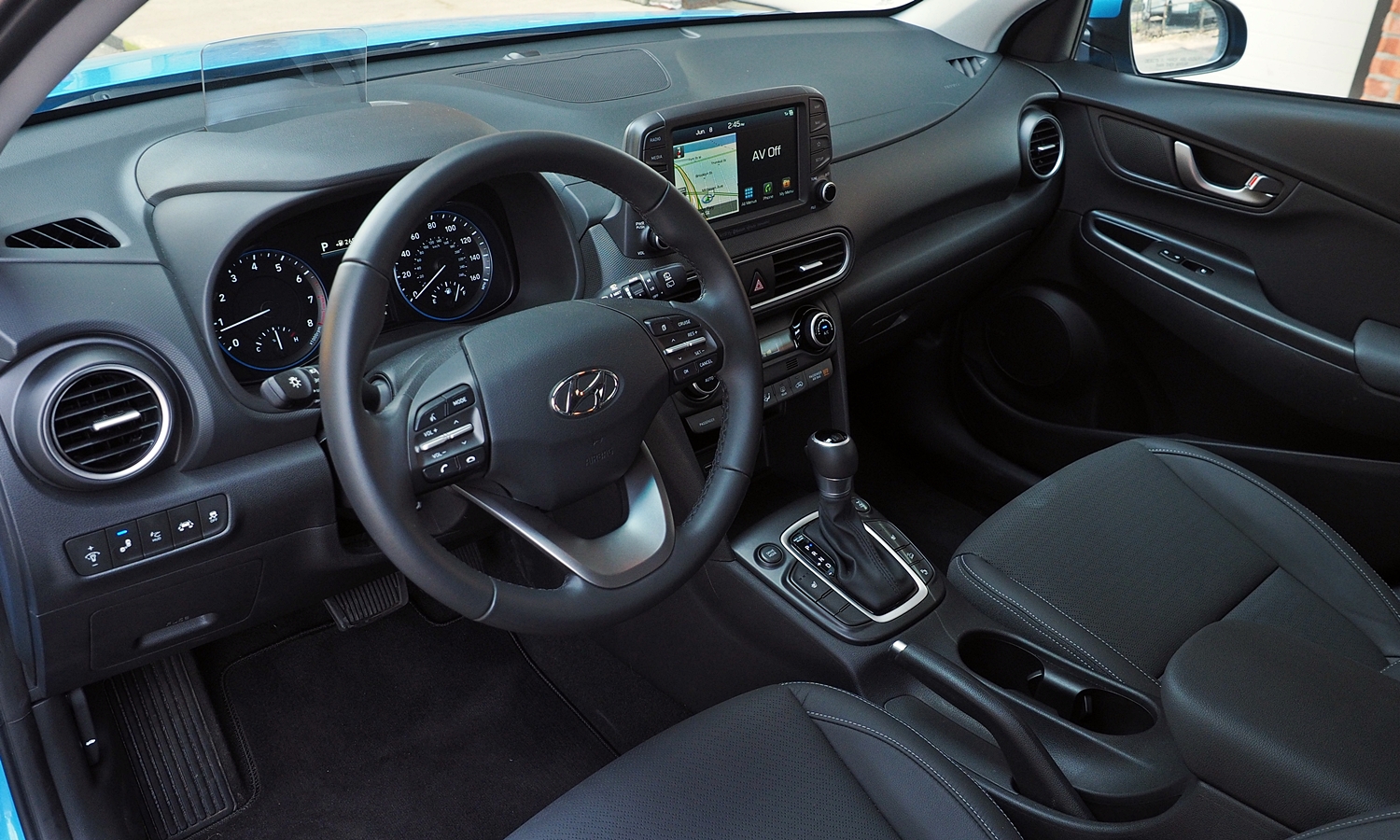 Hyundai's designers weren't nearly as adventurous inside the Kona. Not entirely a bad thing.

Visualize a Honda HR-V or Mazda CX-3. Can you? They're both sleek, pretty vehicles, but are nearly invisible on the road and easily forgotten.

In contrast, Hyundai successfully pursued a bolder, more distinctive "urban smart armor" theme with the Kona's exterior, while managing to stop short of making it controversial or even ugly. I often dislike gray plastic cladding around wheel openings, in part because it can make the openings appear to gape around the wheels, but the way Hyundai executed the cladding on the Kona works.

The Kona's proportions deserve much credit for the success of its exterior design. Hyundai pushed the wheels out to the corners, giving the Kona an athletic stance. A Honda HR-V rides on similar wheelbase but is five inches longer overall. Compared to the Hyundai, the Honda is also an inch narrower and two inches taller. At 61 inches in height, the Kona stands barely tall enough to even qualify as a crossover. Among direct competitors, only the Mazda CX-3 is lower, and just barely. The Chevrolet Trax and Jeep Renegade, with heights close to the average for compact crossovers (a size class up), are about five inches taller than the Kona. For sporty proportions, lower and wider are the way to go.

Available colors include a lime, a blue, and a red that all suit the Kona's styling well (plus, of course, white, silver, gray, and black).

Hyundai's interior designers were much more conservative. This makes some sense. While many people want to present an exciting image, once inside the car they just want to relax. This said, interesting details and more widely available touches of color (as in the related Hyundai Veloster) would be welcomed by this reviewer. Currently you can get the black interior with some lime highlights (stitching, trim rings) with the lime and gray exteriors. Otherwise the interior color choices are all-black or black with light gray upholstered surfaces.

Most of the interior panels are sturdy-feeling hard plastic. Opt for the Limited or Ultimate to get padded surfaces on the face of the instrument panel and on the door armrests.

Nearly all small crossovers from mass-market brands border on sluggish. Their engines can deliver adequate acceleration, but little more. The Kona's 147-horsepower 2.0-liter base engine matches these in objective performance, while being much easier on the ears than the Honda HR-V's buzzy 1.8-liter engine-CVT combo.

Step up to the Kona Limited or Kona Ultimate, and the 2.0 is replaced by a 175-horsepower turbocharged 1.6-liter engine. Notably, this engine kicks out 201 horsepower in some other Hyundais and Kias, including the Veloster, Elantra, and Elantra GT. What doesn't vary, and which is more important in typical driving: the peak torque output with either version of the 1.6T engine is 195 lb-ft at 1,500 rpm, a big bump over the non-turbocharged 2.0-liter's 132 lb-ft at 3,200 rpm. When fitted with the turbocharged engine, the Kona is far quicker than competitors from Honda, Mazda, Nissan, Chevrolet, and Ford. While the Fiat 500X has a 180-horsepower engine, it also cannot accelerate nearly as quickly as the Hyundai. Even in typical daily driving, with shifts occurring far below the red line, the 1.6T's much stronger low-end and midrange lend the Kona's acceleration an effortlessness lacking in competitors.

If you want this much (or downright thrilling) scoot in another small crossover, you'll have to spring for something European--and far more expensive. A similarly equipped Mini Countryman costs about $10,000 more.

While the 2.0 is hitched to a conventional six-speed automatic, the 1.6T is paired with a seven-speed dual-clutch automated manual transmission. While this DCT performs well in most driving, at parking lot speeds it can feel odd. Either transmission delivers much more pleasant acceleration than the CVTs in some competitors, most notably the Honda.

Unlike the Kia Soul, Nissan Kicks, and Toyota C-HR, the Kona can be ordered with all-wheel-drive--with either engine. 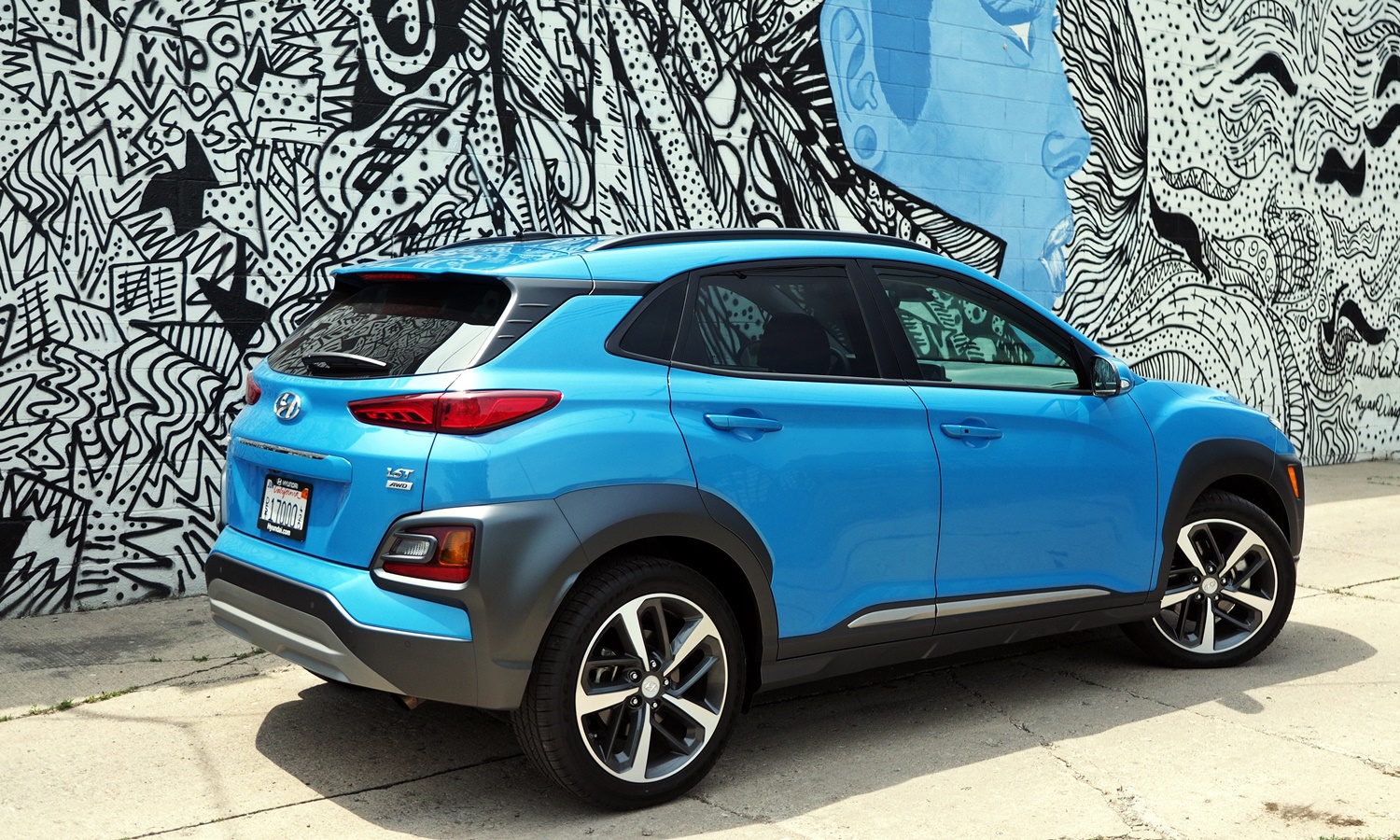 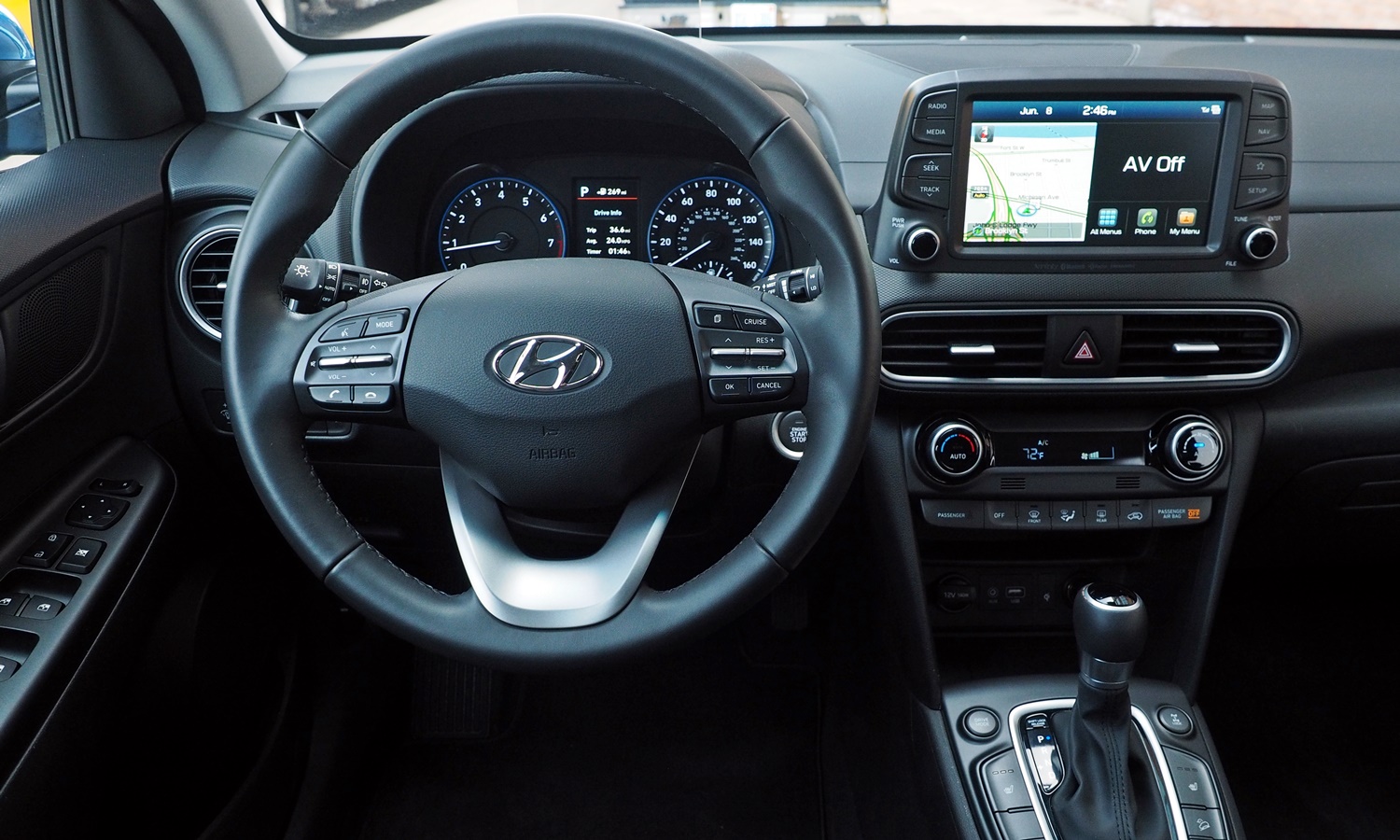 For 2019, Hyundai is making many previously optional collision-warning and -avoidance systems standard. Also for 2019, Honda will offer the HR-V with many of the features the model previously lacked, including the just-mentioned safety tech, support for Android Auto and Apple CarPlay, and a power driver seat. But, unlike with the Kona, the safety tech still won't be available on the lower trim levels.

Some features will remain unavailable on the Kona as well as on all or nearly all competitors. You cannot get adaptive cruise control, dual-zone climate control, ventilated front seats, or heated rear seats. You also cannot get a manual transmission, which some driving enthusiasts continue to care deeply about. If you don't need AWD and are willing to sit a little lower, Hyundai offers the similarly priced Elantra GT hatch with these features.

Hyundai continues to include a longer standard warranty than most competitors: 5 years / 60,000 miles on nearly all non-cosmetic parts of the car and (for the original owner) ten years / 100,000 miles on the powertrain.

Not terribly long ago Hyundais sold chiefly based on price. But as the cars have improved their sticker prices have risen. The tested 2018 Kona Ultimate--the top trim level--listed for $29,775, $2,495 more than the most expensive 2018 Honda HR-V.

However, the Hyundai did include about $5,000 in additional content, more than canceling out its higher price.

For 2019, Honda has added a Touring trim level to the HR-V that includes much of the formerly unavailable content, and it lists for $29,535, nearly as much as the Hyundai (which continues to include more features, just not as many more).

Switching to base trims, the 2018 Kona started at $20,575, the 2018 HR-V at $21,310. The base Kona included about $1,100 in additional content, for a feature-adjusted advantage around $1,900. For 2019 this advantage should grow, as the Kona will gain a bunch of safety tech as standard equipment, while its base price will go up by only about $400. Similar features will also be standard on the 2019 HR-V, but only on the mid-level EX and up. These features will remain unavailable on the HR-V LX and Sport.

Not reflected in these calculations: the HR-V still won't have a powertrain that can keep pace with the 1.6T + DCT standard on the Kona Limited and Ultimate.

Hyundai packaged the Kona fairly efficiently, but only so much was possible given the crossover's compact exterior dimensions. At 5-9 I can barely sit behind someone else my height, my knees nearly touching the front seat back. Put taller people in the front seats, and the rear seat would become viable only for small adults and children.

The Honda HR-V has a much roomier rear seat (but much less comfortable front seats, at least for me, as their headrests jut too far forward). Most other competitors fall between the two. One exception: the Mazda CX-3 has an even tighter rear seat than the Kona.

For those who fit, the Kona's rear seat is mounted comfortably high off the floor.

Due to the Hyundai's shorter rear overhang and some exceptionally creative packaging by Honda, the Kona can only hold about three-quarters as much cargo as the HR-V. To be fair, the Honda is the class outlier, and most other competitors can only hold about as much as the Hyundai. The Mazda CX-3 has an even tighter cargo area. 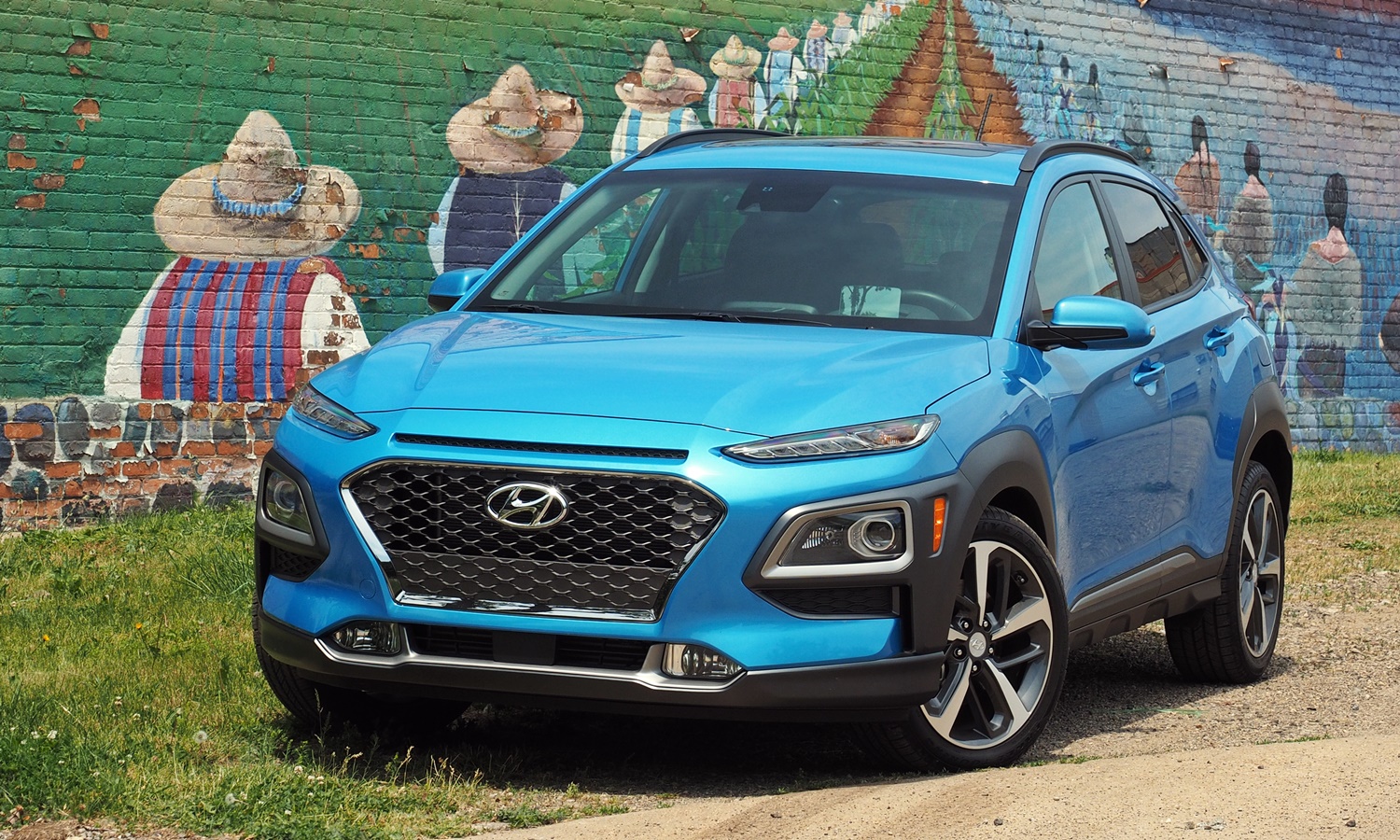 A lot going on with the front end, but Hyundai's designers managed to tie it all together. 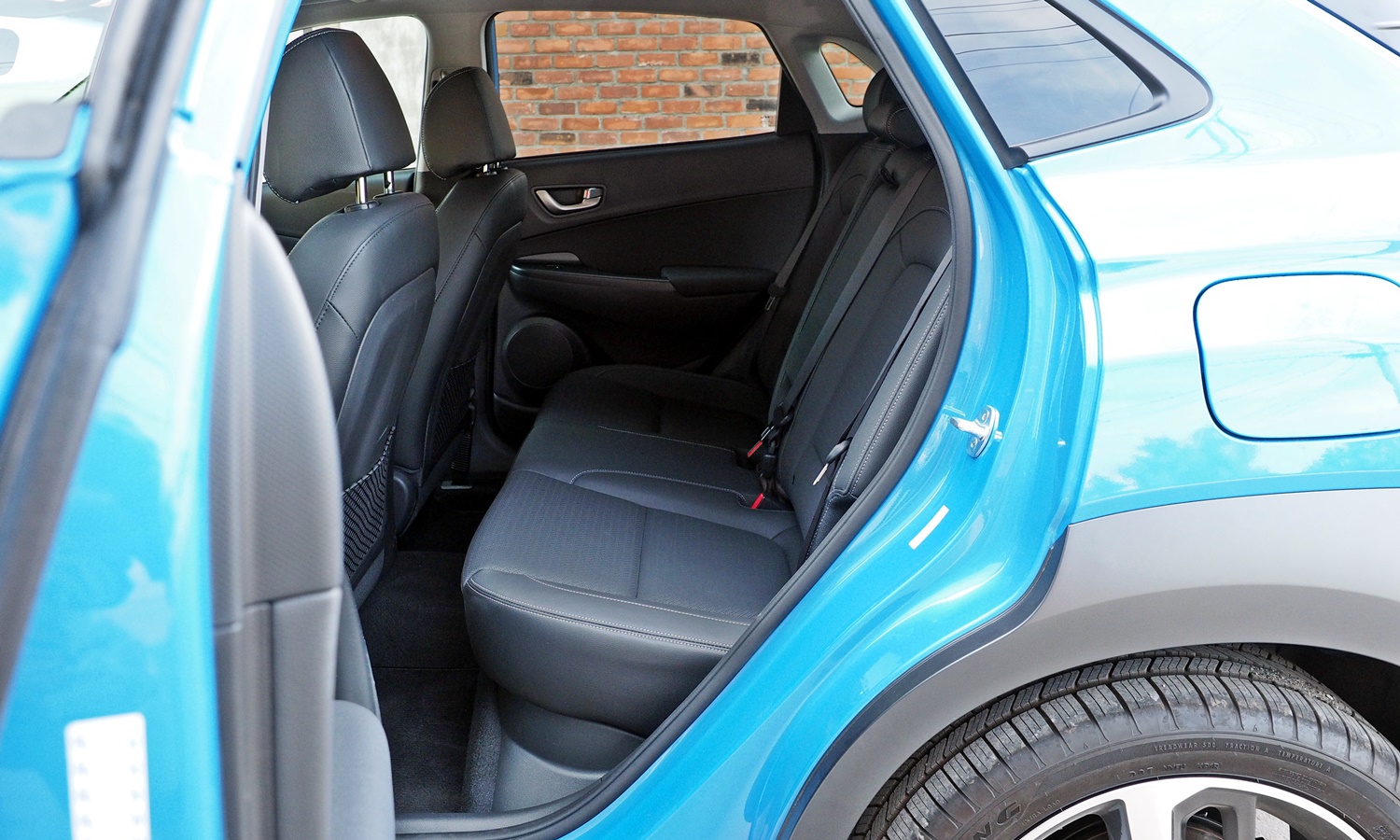 Nearly the tightest rear seat in the class. A comfortable height off the floor, though.

Typical of Hyundais, the Kona's controls are easy to understand, reach, and operate.

The HR-V's controls improve for 2019 with the addition of a volume knob, but remain more difficult to navigate and operate.

The Kona's handling isn't quite what I'd call sporty, so I can't quite list it among the "why to buys." But compared to direct competitors the Hyundai handles well, with moderate lean and (in sport mode) firm-ish steering that hints at providing feedback. The related 2019 Hyundai Veloster feels more firm and precise, yet it could also be more engaging. Both Hyundais use brake-based torque-vectoring to counteract understeer (plow) in turns, and this helps them feel more balanced than front-heavy cars tend to.

The Kona also rides fairly well, if with some occasional bounciness that suggests body motions could be more effectively damped. The body structure does feel rigid, with no quivering over bumps.

The Kona manages competitive but not outstanding fuel economy. With the base 2.0-liter engine, EPA ratings are 27/33 mpg with front-wheel-drive and 25/30 with all-wheel-drive. The Honda HR-V does a bit better: 28/34 with FWD and 27/31 with AWD.

The additional power of the 1.6T engine comes at no fuel economy penalty. Compared to the 2.0-liter engine, the 1.6T rates one mpg higher in city driving and one mpg lower on the highway.

None of these small crossovers approach the fuel economy ratings of the most efficient compact cars, especially not in highway driving. For example, a turbocharged Honda Civic achieves 32/42.

Unless...you wait for the 2019 Kona Electric. Nearly as quick as a Kona with the 1.6T gas engine, and able to travel over 250 miles on a charge, the Kona Electric could be the EV many people have been waiting for.

If you happen to find the regular Kona's face a bit busy, the Kona Electric will also fix this, as it's front-end styling is much cleaner.

The Hyundai Kona distinguishes itself within an increasingly crowded class with bold yet attractive exterior styling and a relatively powerful uplevel engine. Features and pricing are also competitive. But the Kona is a compact vehicle even by small crossover standards, so rear seat room and cargo space are near the bottom of the class.

Care more about styling, accleration, and uplevel features than about space for people and things, but don't have the budget to buy and maintain a Mini Countryman? Then the Kona is currently the best small crossover for you. 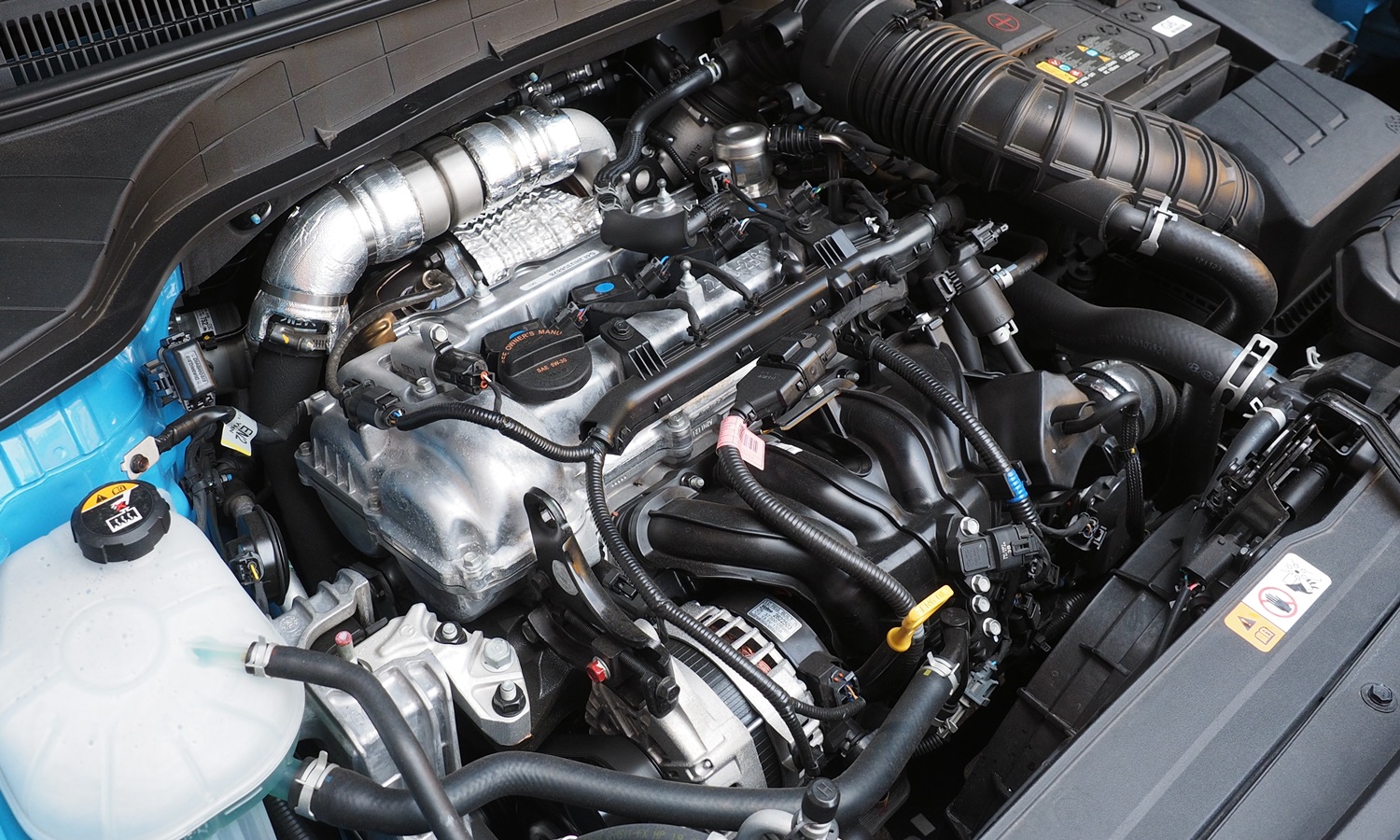 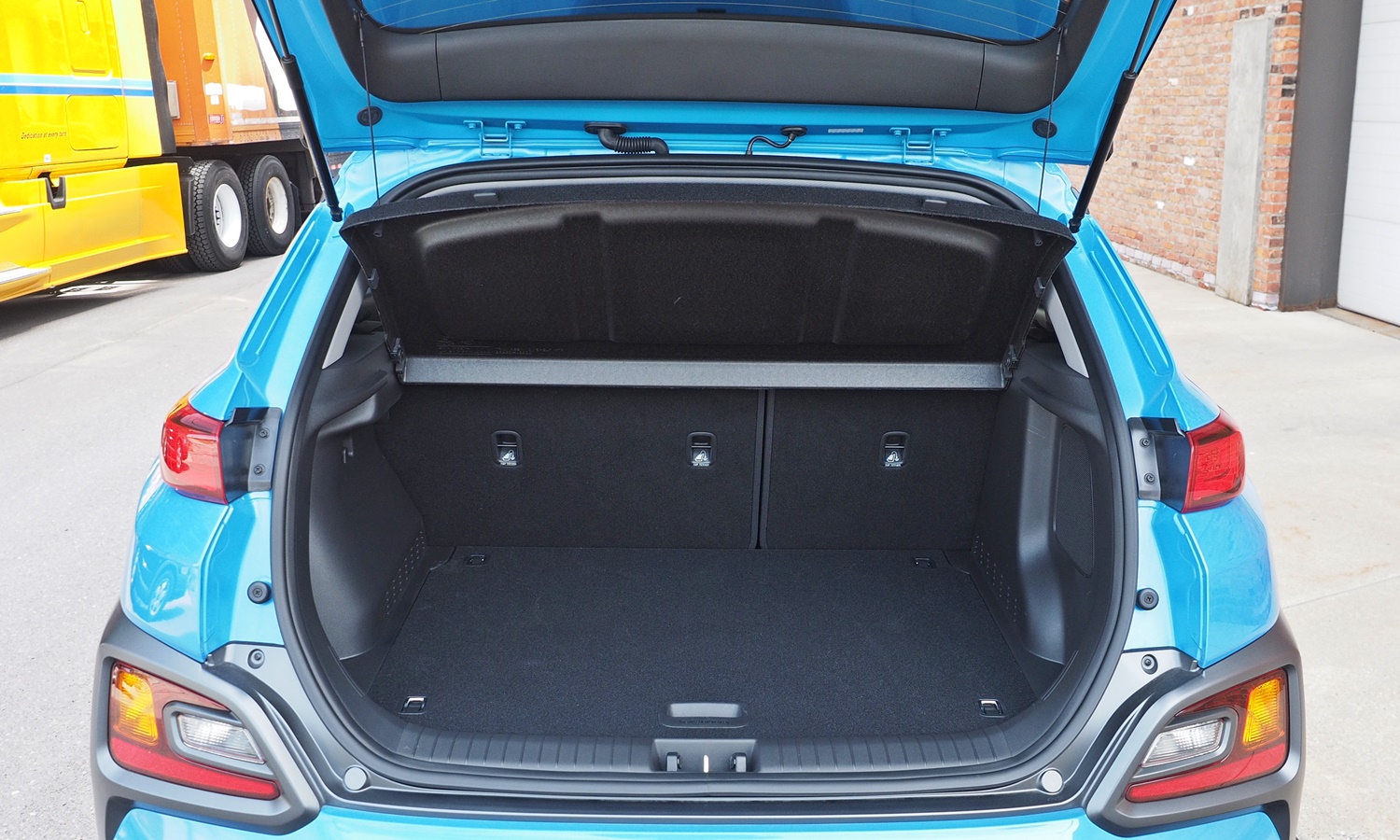 Not much cargo area for a crossover. But possibly enough for your needs.

Hyundai provided insured, fueled cars and meals at an event for invited media. Honda provided an insured car with a tank of fuel for a week.

More About the Kona 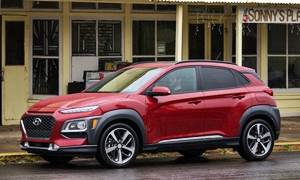 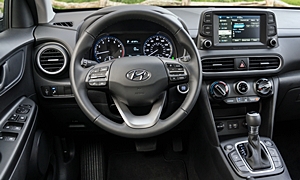