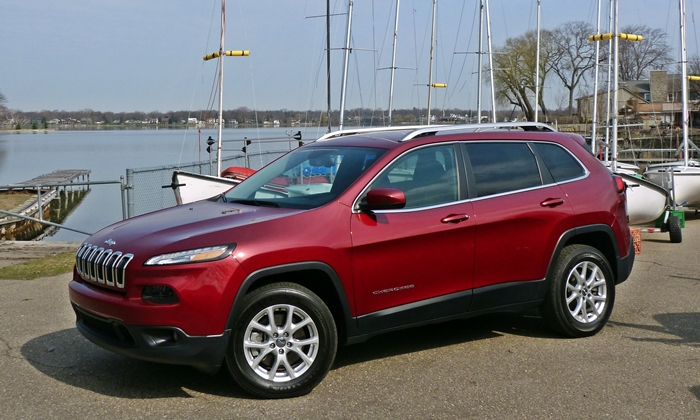 For years, Jeeps were purpose-built vehicles for hardcore off-roaders (or people attracted by the image of hardcore off-roading). When the brand introduced a couple of car-based compact SUVs for the 2007 model year, the Compass and the Patriot, the reaction from its fan base was...not welcoming. Yet for 2014 Jeep has replaced the truck-based Liberty, which never quite hit it off with these fans, with a vehicle based on a Fiat car platform. Not only this, but they've attached the hallowed Cherokee nameplate. This might seem a recipe for a massive brand equity-emasculating backlash. But the uproar I expected hasn't happened. What about the new Jeep Cherokee has been winning people over?

TrueDelta visitors most often compare the new Cherokee to the Ford Escape and Subaru Forester. This is like comparing an apple to an orange, and perhaps a pear. (From the glass half full dept.: credit Jeep for successfully designing the new Cherokee to appeal to a much broader market than off-roading enthusiasts.) In terms of aesthetics and size, the new Cherokee matches up most closely with the GMC Terrain, so I've selected it as the primary comparison vehicle. 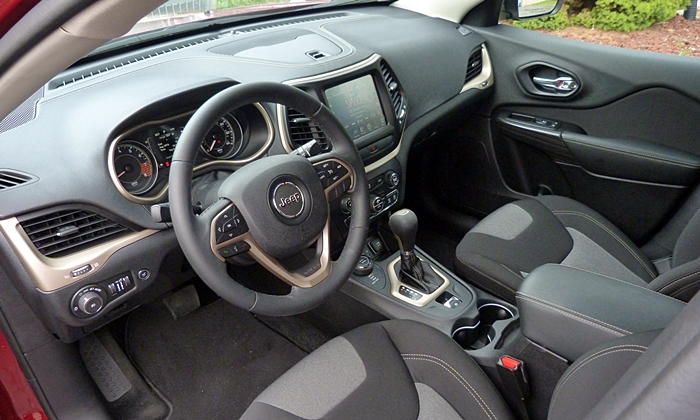 The Ford Escape's configuration is almost as flexible as the Jeep's. The Subaru Forester 2.0XT's isn't close. If you want even some of the above listed features, you need to step up from the $28,820 Premium to the top-of-the-line, $33,820 Touring.

Got deeper pockets? If someone in the segment offers a feature, the Cherokee probably does as well: all-speed adaptive cruise control, a full array of collision warning systems, a self-parking system, auto-dimming xenon headlights, rain-sensing wipers, memory for the drivers seat, ventilated front seats, heated steering wheel, reconfigurable LCD instrumentation, panoramic sunroof, and on and on.

Then there are the features no one else offers. The Trailhawk variant (not tested) has a two-speed transfer case, a lockable rear differential, and crawl control. These features plus the ability to select from multiple traction and stability control modes based on terrain type (included with AWD on all trim levels) and hill descent control (also offered on the Subaru) make for off-roading capability well beyond other car-based crossovers. This capability might well explain the lack of a backlash from Jeep's fan base.

The GMC Terrain might look much more rugged than the Cherokee, but it's not designed for serious off-roading. Even in pricey Denali trim the Terrain lacks many of the features available on the Jeep.

Chrysler's latest control interface is perhaps the best in the industry, with a large, responsive, well-organized touchscreen plus large knobs and buttons for key functions--all of it within easy reach. 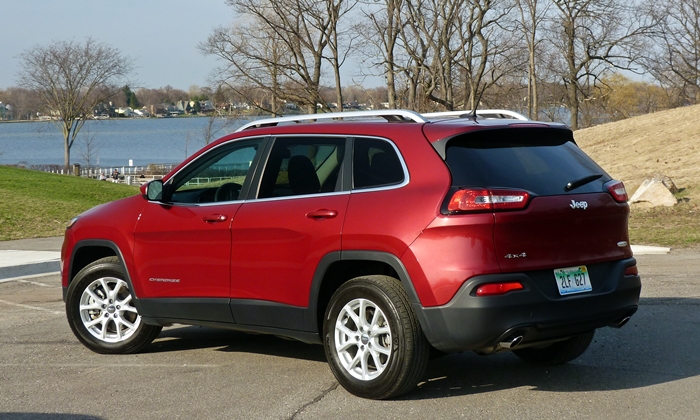 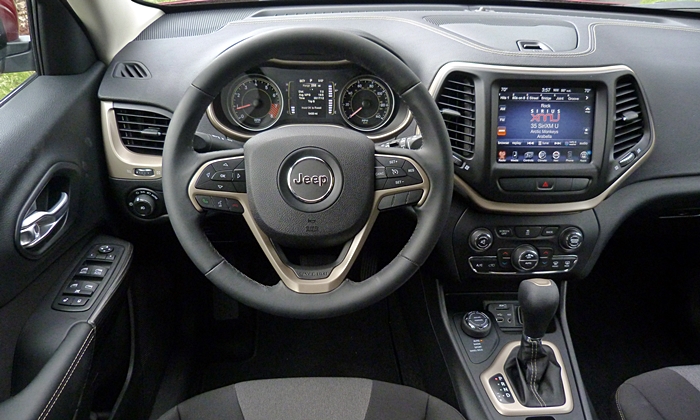 Equip a GMC Terrain SLE as close as possible to the tested Jeep Cherokee Laredo, and it lists for just $660 more, $32,140 vs. $31,480. But, as mentioned above, the Cherokee includes many features not even offered on the Terrain. Adjust for these feature differences and the Jeep's pricing advantage grows (and grows, and grows some more) to nearly $3,500. (On a feature-adjusted basis, the Cherokee Limited compares even better than the Laredo.)

When equipped much like the tested Cherokee, the Ford Escape SE lists for $400 less. Pretty close. But the Jeep has about $2,000 in additional content. Much of this additional content is also available on the Escape, but only if you also spring for leather or step up to the Titanium trim level.

If you don't require much in the way of features, the Subaru Forester 2.0XT Premium lists for over $2,000 less than the tested Cherokee. But feature differences account for nearly the entire amount. If you want even one of the features lacking on the 2.0XT Premium, you must find another $5,000 for the 2.0XT Touring. A Cherokee Limited equipped like the 2.0XT Touring lists for $855 more ($34,675), but includes about $2,700 in additional features.

Many people dislike the new Jeep Cherokee's face, which oddly positions the headlights below the marker lights (which most people will mistake for headlights) and above the foglights.

Personally, I have a larger aesthetic issue with the Cherokee's lengthy front overhang and weak "chin" (more on the Trailhawk than on the Laredo in the photos, to enable a steep approach angle despite the crossover's distended nose).

If you find the new Cherokee's exterior styling attractive--some people complimented it--then ignore this "why not to buy."

Due to a bobbed tail and high floor, the Jeep Cherokee's cargo volume stat, 55 cubic feet, ranks near the bottom of the segment. You can pack nine more cubes into the Terrain, 13 more into the Escape (maybe, Ford tends to get creative when measuring its vehicles), and 20 more into the Forester.

In the Cherokee's favor, it's the only vehicle in this bunch with a folding front passenger seat. If you need to carry especially long objects inside, it's the champ. 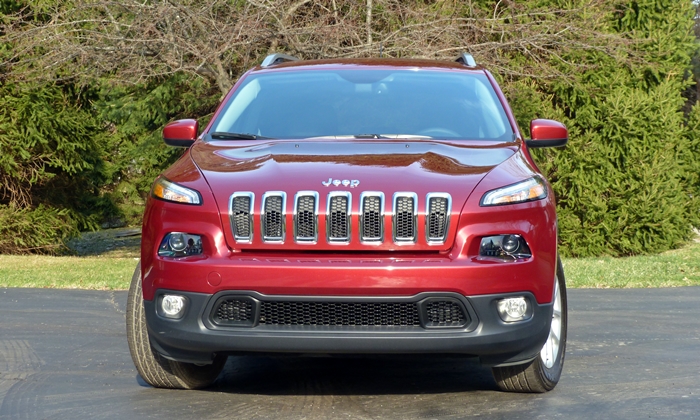 The new face of Jeep? The headlights are the bulbs just above the bumper. 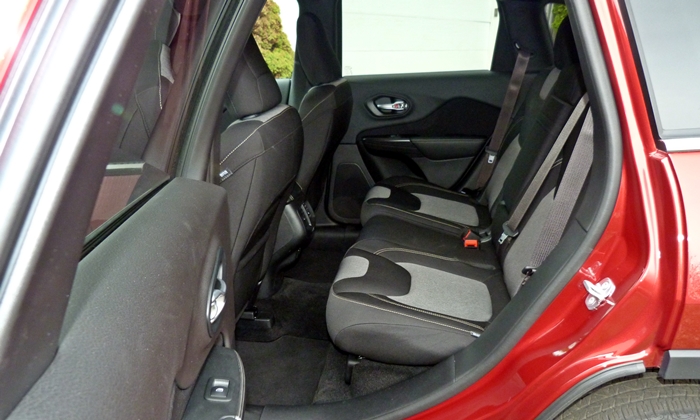 Compared to the relatively sporty Escape and Forester, the Cherokee feels much larger and heavier, partly because it is significantly heavier (4,044 lbs. vs. 3,732 and 3,624). In quick turns the Jeep can feel clumsy as it plows toward the outside curb despite the intervention (with AWD) of a torque vectoring system.

The Terrain is even longer and heavier (4,188 lbs.), and its steering is more numb, so even with the additional stability provided by its especially long wheelbase it also lags the others when the road turns twisty.

Many of the new Cherokee's interior surfaces look and feel of high quality. If the knobs and buttons felt less cheap I'd place materials among the reasons to buy one.

The Jeep's cloth seats feel mushy. The leather seats (not on the tested Cherokee) are more supportive.

I first drove the new Jeep Cherokee with its base engine, a 184-horsepower 2.4-liter four-cylinder engine, and...waited until I could also drive the V6 before posting this review. While I liked the 2.4 in the related Dodge Dart, the Cherokee is too heavy for it, rendering acceleration sluggish and noisy.

The 271-horsepower 3.2-liter V6 is far quicker, sounds much better when revved, and is nearly as fuel efficient (more on this below). Spend the extra $1,495.

This said, the Escape with its turbo four is just as quick, and both the Terrain (with a 301-horsepower V6) and Forester 2.0XT (with a 250-horsepower turbocharged four) are even quicker. So no "why to buy" even with the V6. To possibly earn one, Jeep needs to fit the Cherokee with the 295-horsepower 3.6-liter V6 offered in the related Chrysler 200.

They also need to retune the nine-speed automatic transmission. As is, the ZF box too often bumps its way through shifts. The same hardware in the 2015 200 sedan shifts more smoothly.

When I was especially easy on the new Cherokee's gas and brake pedals, its trip computer reported averages as high as 31.8 in suburban driving. I observed suburban averages around 27 more often--still quite good for a powerful all-wheel-drive crossover. The clunky nine-speed automatic deserves a lot of the credit, as it keeps engine speed below 1,500 rpm when cruising at up to 55 mph.

The Jeep Cherokee V6 AWD's EPA ratings are much better than those of the GMC Acadia V6 AWD, 19 mpg city, 27 mpg highway vs. 16/23. But they're not quite as good as the Escape's (21/28) much less the Forester's (23/28). Note that the Jeep is most competitive in highway driving, where the transmission's three additional ratios enable a much taller top gear. In city driving the much smaller turbocharged engines have an edge, especially when hitched to a CVT (as in the Subaru).

The Jeep Cherokee rides smoothly and quietly, but the GMC Terrain, with another half-foot of wheelbase and even more sound deadening, retains an edge in this area. The Escape's suspension tuning gives a higher priority to handling, so some people will find it overly firm. The Forester's suspension strikes a good balance, but by this token doesn't feel as sporty as the Escape or as luxurious as the Jeep or GMC.

On any comprehensive scorecard that doesn't heavily weight off-road capability, the new Jeep Cherokee can't match the Subaru Forester. The nine-speed automatic wrings decent fuel economy out of the V6 and the interior is well-designed from both aesthetic and functional standpoints. But the Jeep weighs much more--harming performance, city fuel economy, and handling--yet can't carry nearly as much.

On the other side of the ledger, Jeep's menu includes far more features than the GMC Terrain. Plus, unlike with the Subaru, you don't have to choose between a basic model and a loaded one. Pricing is aggressively competitive.

Ultimately, the best reason to buy the new Cherokee is the thing that made Jeeps Jeeps: off-road prowess. No other compact crossover offers a two-speed transfer case or a lockable rear differential. What this means: if you really want a Jeep, and like the size and price of the Cherokee, you don't want the tested Laredo. You want the Trailhawk.

You'll never leave the pavement, but badly want a Cherokee anyway? Attracted by the brand, the impressive features-per-dollar, or possibly even Jeep's new face? For reasons I don't entirely grasp, it is selling well.* Just be sure to get the V6 engine. And perhaps the leather seats as well.


* If you do understand, please fill me in in the comments. 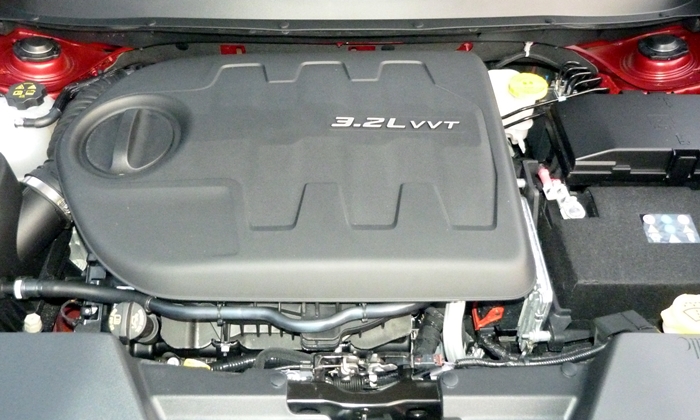 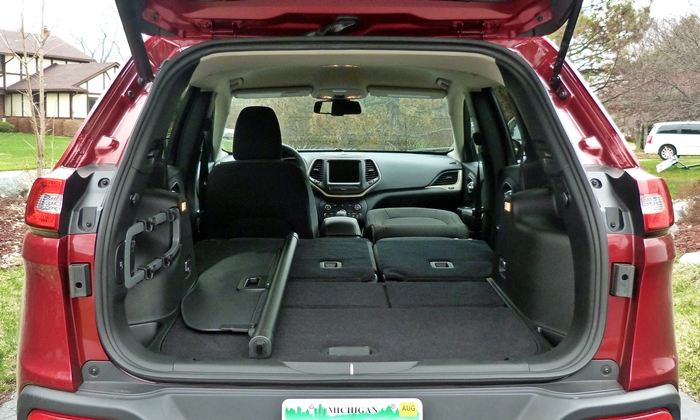 The Cherokee compensates for its most significant shortcoming with a folding front passenger seat.

Jeep and GMC each provided an insured vehicle for a week with a tank of gas.

One capability often not mentioned is towing. How easy is it to get a towing package, and for more than 2,000 pounds or so. Jeep ads usually point this out. On several forums I've seen new owners mention being able to tow a boat or a camper.

Midsize crossovers are usually rated to tow 5,000 lbs. I'm not sure about compact crossovers.

MICHAEL, EXCELLENT COMPARISION CHOICE SINCE I AM CURRENTLY INDECISIVE BETWEEN THE TWO. REGARDING THECHEROKEE LOOKS (STYLING), I LEAN MORE TOWARD THE MANLY LOOKS OF THE TERRAIN. THE JEEP LOOKS KINDA FEMININE TO ME. X feminine

Towing is a major factor many reviewers overlook. The Forester is a measly 1500 lbs barely capable of towing a utility trailer and much less than class normal 3,500. The Jeep is 4,500 lbs. Tested all the competition and settled on the Cherokee because it was capable of towing more than its class competitiors and do it with power, comfort and quiet.

Excellent point, thanks for posting it.

To reach the 4500 lb tow rating, you must add the tow package to the V6; otherwise, it is only 2000 lbs. A little ridiculous, but for $450 or so, you get enhanced transmission cooling, a HD alternator, and the wiring. I believe the hitch is included, too.

Thanks for this detail. It's pretty common to require a tow package to get a maximum tow rating.

I took delivery of my 2016 Cherokee 3 days ago (0rdered vehicle), it is a North edition (Latitude in the USA). It has the 2.4 Litre Tigershark engine, for my wife and I this engine is sufficent and very responsive, we do not tow. Since Michael tested his Cherokee FCA engineers and programers now seem to have a firm grip on the workings of the transmission and I must say right out of the box the transmission is silky smooth now in all shifts and very responsive. The 8.4 radio is excellent to use and FCA premium sound system is very nice (Alpine) design. The 4 wheel Active Drive1 has a few settings like Auto-Sport-Snow-Sand/Mud.So far I am very happy with my purchase and the quality build. White-4X4-Beige interior-2.4 Litre engine-8.4 radio with backup camera-Premium speakers-Power drivers seat-Winter package.

More About the Cherokee 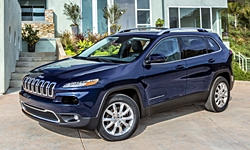 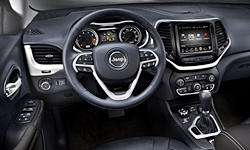