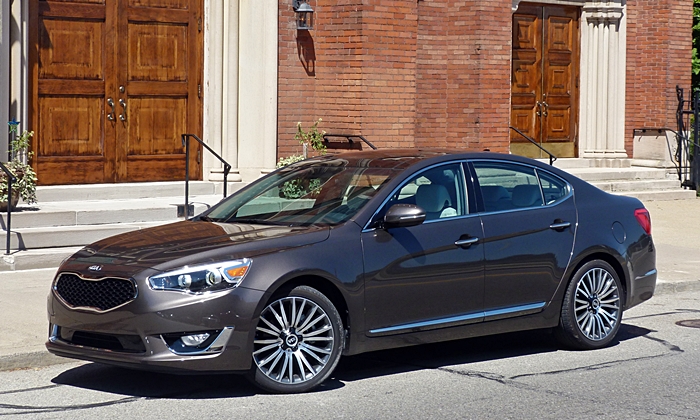 Tick all the boxes for the new Kia Cadenza--all three of them, it's no Porsche option list--and the bottom line comes to $41,900. It wasn't long ago that when people heard Kia they thought "cheap"--if they thought anything at all. Actually, for many people this remains the case despite the dramatic gains the company's cars have made in styling, performance, fuel economy, reliability...just about everything. A $41,900 Kia sedan? They must be crazy!

Before reserving a padded room for Peter Schreyer and associates, though, let's give them the benefit of the doubt and actually compare the Cadenza to other full-size sedans, including the closely related Hyundai Azera, the Toyota Avalon (reviewed previously),and the recently redesigned (and much improved) Chevrolet Impala. 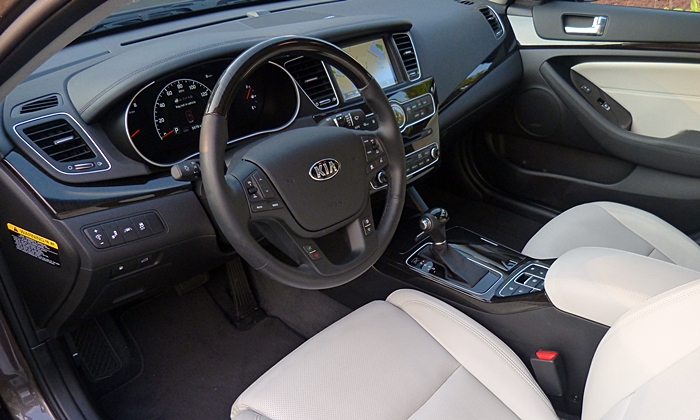 Conservative, perhaps to a fault, in here as well.

These days, you can't buy a full-size sedan that isn't quiet. Yet the Cadenza could be the quietest of the bunch. Even compared to the Chevrolet Impala, a very quiet car, the Kia seems more hushed. It's not just the quantity of noise. Some tire clomp on tar strips notwithstanding, the quality of the noise that manages to intrude is the sort that separates premium cars from the rest.

Partly as a result, the Kia's ride also seems more polished and luxurious. The Impala actually maintains its composure better when hustled through imperfectly paved curves, and more expertly manages a wider range of road imperfections. Yet in its sound and feel the Chevrolet seems more ordinary.

Either car rides much better than the more firmly sprung Azera and Avalon. Still, their suspensions are much tauter than the pillowy full-size sedans of yore. Float and wallow aren't happening in any of these cars.

Both Hyundai and Kia have sought to out-Japanese the Japanese by offering a surprising number of features at a given price point. Is this still possible at $41,900?

Compared to the Avalon and Azera, absolutely. Load up all the cars, and the Cadenza includes about $1,700 more content than the Avalon and about $2,800 more than the Azera. The large difference compared to the Azera might be due to the presence of the Genesis at the top of the Hyundai line-up. Kia doesn't offer a related, rear-wheel-drive luxury sedan in North America (at least not yet). But even if you compare the Cadenza to the Genesis it has about $1,000 in additional features.

Don't feel the need for the fancy electronic systems? Then you can save $3,000. But you'll also have to give up the suede-like material on the pillars and headliner. A pseudo-suede headliner is a $1,000+ option on European luxury sedans. On the Cadenza it's included in the "White Interior Package." Which is free, except that it requires the $3,000 Luxury Package (higher quality leather on the seats, leather on the door panels, panoramic sunroof, HID headlights, heated steering wheel, cooled driver seat with memory, heated rear seat, power rear sunshade) and the $3,000 Technology Package (adaptive cruise plus safety nannies). The latter package seems overpriced--until you factor in the luxe headliner. And this headliner plus the softer leather do take the Cadenza's interior beyond those in the other cars despite a few too many buttons that should be confined to lesser Kias. You'll note more surfaces that aren't quite up to snuff in the others, especially the Chevrolet and Toyota.

You might have noticed that I haven't compared the Impala yet. Well, the Cadenza's feature list isn't quite complete, and the front seat passenger suffers the brunt of the shortfall. The front passenger gets only heat plus power fore-aft and recline. No power height, no power tilt, no lumbar, and no bun cooler. The front passenger in an Impala LTZ gets all of these things. The Chevrolet has a few more things the Kia doesn't, while the Kia has a few things the Chevrolet doesn't. Total the differences up and the Kia does end up $750 ahead, but only due to our $1,000 valuation of that fancy headliner. 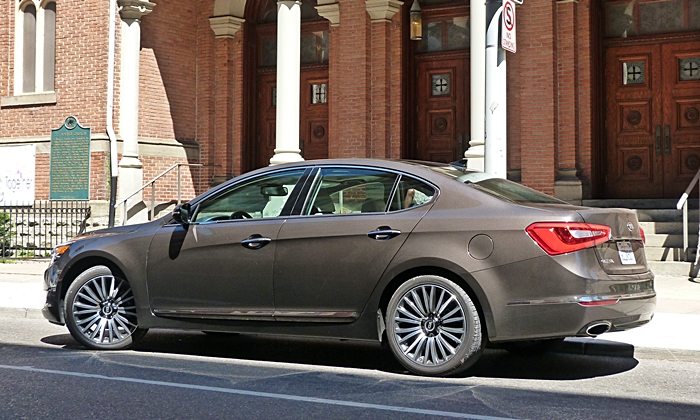 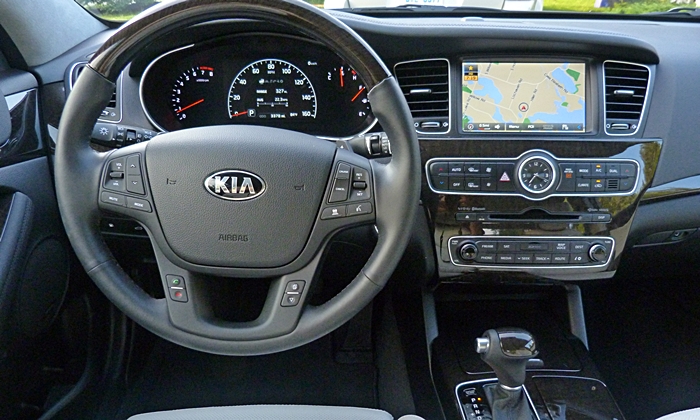 Too many similar buttons in overly large groups.

The Cadenza and Azera might be related, but you'd never guess this from sitting inside them. The Hyundai's windshield is much more steeply raked. Its instrument panel is deeper and seems much taller. Compared to those in any of the other cars, but especially compared to the Azera's, the Cadenza's windshield appears larger and more upright, for a more open and comfortable view over the hood of the car. As a result, the Kia feels more maneuverable. Rearward visibility is also better in the Cadenza, if not to the same degree. (You see a lot more of the package shelf in the Impala's rearview mirror.)

And the driver seat itself? It's cushier than those in the other cars, especially the butt-numbing bucket in the Avalon, yet it's also shaped to provide the best support. Some Acuras have similar seats that wrap around you without feeling constraining. In the Impala my upper body had to shift an inch or so in turns before coming into contact with the bolster.

The Cadenza more than makes up for this trivial difference in quantity with a rear seat cushion that is more comfortably shaped and positioned than that in the Impala, and cushier than the overly firm park bench in the Avalon. The Azera's rear seat is similar, though.

If you are carrying tall passengers in back, headroom will be a factor long before legroom will. None of these cars have an abundance of it. When both the Cadenza and the Impala are fitted with panoramic sunroofs the Impala has about a half-inch more. Not a large amount, but for some people it will be the difference between contacting the headliner and not contacting it.

Load up both the Cadenza and the Impala, and the latter is $695 less. As mentioned before, the Kia's fancy headliner gives it a $750 content advantage. Factor this in, and the two cars are nearly dead even.

And the Toyota? Loaded up it's $520 more than the Kia before adjusting for the latter's additional $1,700 of content. So while the Kia, Chevrolet, and Toyota all have similar numbers on their window stickers, the last gives you considerably less stuff for this number.

One caveat: it's not clear if any of the wood inside the Kia is real. The Kia site suggests that some of it is, and that some of it isn't, but I couldn't tell a difference. I've requested clarification. Until I learn otherwise, I'm assuming that the bit on the steering wheel is the real deal, while the rest is plastic. If more turns out to be sources from trees, the Cadenza will be credited with another $300 in content.


At 16 cubic feet, the Cadenza's trunk is usefully large, and about even with those in the Azera and Avalon, but three cubes short of that in the Impala. This alone wouldn't land cargo capacity in the "why not to buy" list. Rather, unlike in the other three sedans you cannot fold the Kia's rear seat to expand the trunk. A small pass through is provided, though. So skis or 2x4s will fit. 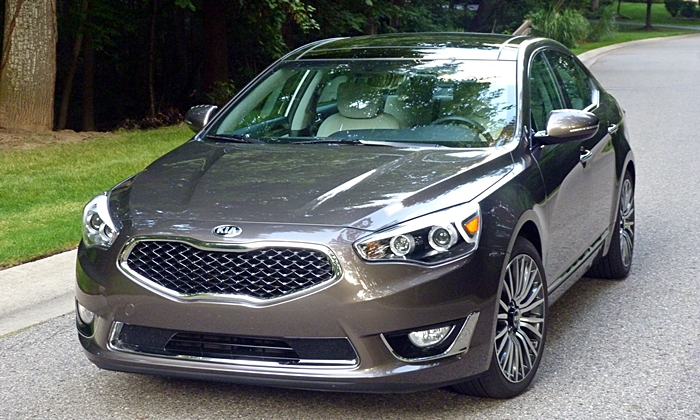 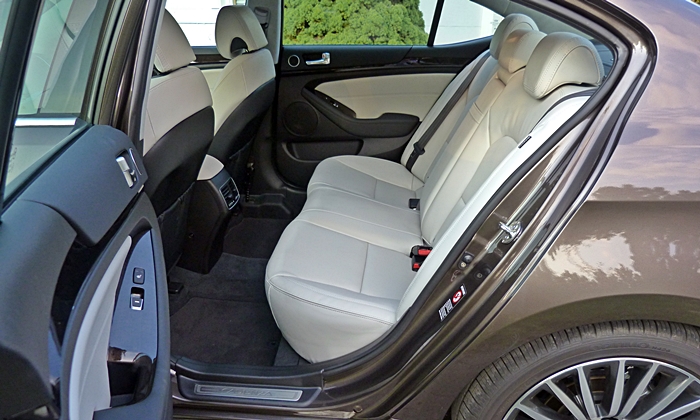 For me, the most comfortable in the group. Cushion still a bit too low.

The flipside of the Cadenza's superior driving position and outward visibility is an exterior that's less swoopy than the Avalon's and Azera's and less sporty than the Chevrolet's. The big Kia is a handsome sedan, but unlike these competitors and the less expensive (but also much less refined) Optima it won't inspire any double-takes. If one or more of the other's appear to be trying too hard to look exciting, and conservative styling appeals to you, then by all means count this as a reason to buy the Cadenza.

See above. The Kia's interior is as conservatively styled as its exterior, with the sort of square forms you'll find in a Mercedes. If you want to feel like you're piloting a starship, buy the Hyundai or Toyota. Wait, that's not at all what you want? Then the Kia gets another win in your tally. Inside as well as outside, the Impala falls between the two extremes.

One aspect of the Cadenza's highly conventional interior styling: too many buttons that are the same size and shape, in overly large groups. I never could adjust the fan speed at a glance. The Impala's controls include a larger number of more prominent knobs, and the buttons are more logically grouped.

In both cars, many functions are managed via a touch screen. To change from, say, nav to audio in the Kia, though, you had to reach down to the hard buttons at the base of the center stack, then reach back up to the touch screen. You can't move from one major function to another entirely through the screen, which lacks a homepage. The Impala's system is not without its own faults, most notably slowish response times, but it's more comprehensive, easier to use, and more attractive.

A final nit in the Kia's instruments: they've fitted a reconfigurable LCD in the main instrument cluster, but as executed it's just a little more flexible than a conventional display. Most of the LCD's surface never changes (unless you count the light show when the car is first started). They could do more with it.

The 3,668-pound Kia Cadenza shares a 293-horsepower, 3.3-liter V6 engine and six-speed manually shiftable automatic transmission with the Hyundai Azera. The 3,800-pound Impala has a 305-horsepower 3.6-liter, while the 3,461-pound Avalon has a 268-horsepower 3.5-liter. Put the pedal to the floor, and all are about equally quick--and quicker than such cars have any real reason to be. But especially in casual driving the smaller Hyundai/Kia V6 has to work a little harder to achieve similar results.

Perhaps to compensate for its engine's lesser displacement and consequently weaker low-end, the Cadenza's throttle is surprisingly aggressive. The first few days in the car I often received a much stronger reaction than I expected to what seemed like small throttle inputs. One or both of us learned from these initial encounters, though, because afterwards the throttle seemed more gradual.

The EPA estimates that the Cadenza will manage 19 mpg in city driving and 28 mpg on the highway. The Impala rates a bit lower (18/28), while the Azera rates a bit higher (20/29). The Avalon does better than the others, though: 21/31. The Cadenza's trip computer reported averages close to its EPA ratings. In my real-world driving, the Avalon did perhaps 1-2 mpg better than the Cadenza in suburban driving, but fell short of its EPA rating on the highway.

If you really want better fuel economy in this class, the Impala has a standard four-cylinder engine, while the Avalon is offered in hybrid form.

The Cadenza's steering feels lighter but less artificial than the systems in the Azera and Avalon, and feels more precise than the relatively vague system in the Impala. The more softly suspended Kia loses its composure a little when hustled, but in typical, more casual driving I enjoyed driving it the most within this group. For a large, luxurious sedan it just feels right.

For a $41,900 price, a loaded Kia Cadenza not only includes a lot of features, but the most luxurious look and feel in this group. It doesn't look or drive as sporty as the Azera and Avalon, even the Impala. But for many buyers it will be the Hyundai and Toyota that have lost the plot. Anyone seeking a full-size sedan that is first-and-foremost a luxury car should try to overcome any brand prejudices and give the Cadenza a look. 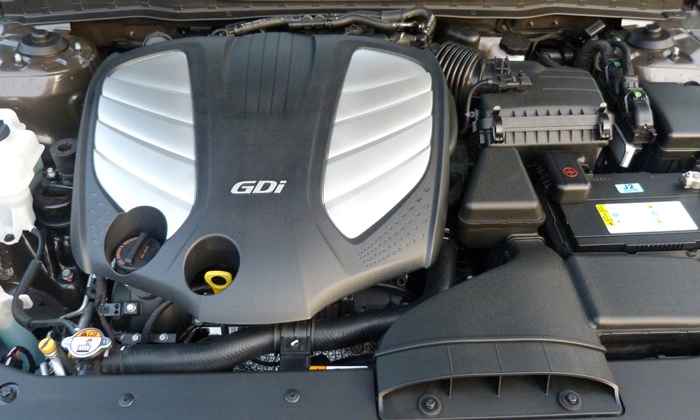 Like the same engine in the related Hyundai, cover makes it appear longitudinal (but off center). 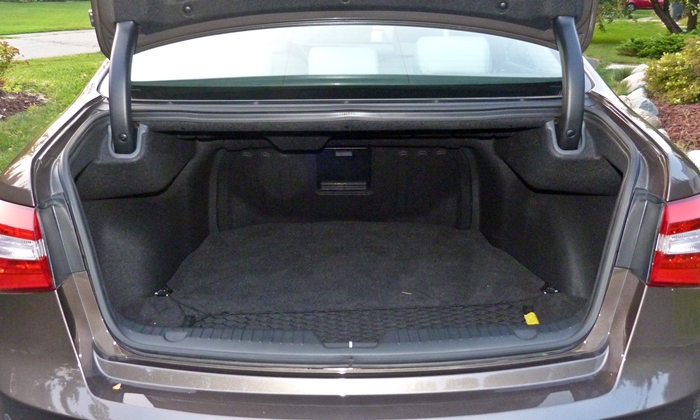 Kia provided an insured Cadenza for six days with a tank of gas. Paul Gardulski of Marty Feldman Chevrolet in Novi, MI (248-912-9110) provided an Impala for a comparative test drive.

More About the Cadenza 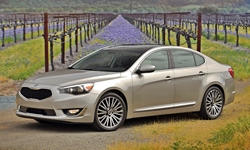 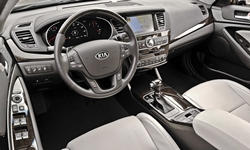