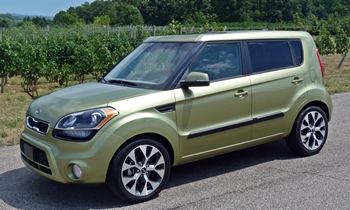 For its first quarter-century in North America, the Korean auto industry focused on producing Toyohonda-style appliances, for less. But Hyundai and Kia are no longer content with selling cars based on a low price and a long warranty. They want to make cars that appeal to the heart as much as the head. In case the car's styling didn't get this point across, Kia labeled one such effort the Soul ! (with the ! denoting the top trim). How deep is its appeal? 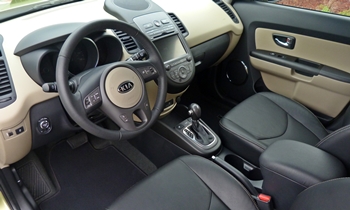 A Sport model with red/black interior is no longer offered. But in the ! sand warms up the black.

Most people didn't care for the "so ugly its cool" original Scion xB, but those who "got it" loved it. Then the larger, more overtly styled second-generation xB was just plain ugly. Its archrival, the Nissan cube, flopped in the U.S. for a different reason. Too few Americans possess sufficient whimsy when buying cars. In contrast, Kia has hit the sweet spot the others missed (by miles) with the Soul. Kia's designers took the original xB's radically boxy box and, by angling the roof downward a few degrees, raking the belt line upward a few degrees, and artfully flaring the wheel openings, actually made that box stylish. Seeking a small car that doesn't look like the typical small car, but that doesn't try so hard to be different that it's not pretty? It's here.

The fun continues inside the Soul, with playful (but well short of whimsical) shapes, a healthy amount of color on the dash and doors (in the ! trim), and lights encircling the front door speakers that flash with the beat. Materials are decent for the Soul's price, with soft-touch paint coating much of the interior's hard plastic. 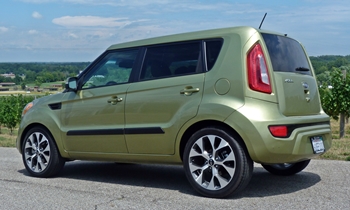 Also a stylish box from this angle. 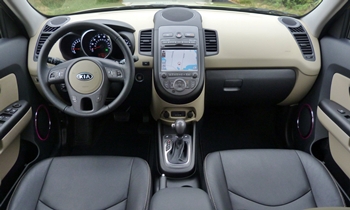 Controls easy to reach and operate.

With a starting price under $15,000, the sparest 1.6-liter Soul is among the least expensive new cars. An automatic (which brings cruise, Bluetooth, and deep-tinted glass with it) adds $1,800. The top trim 2.0-liter Soul! starts at $20,350. The Premium Package, with heated leather seats and nav, adds $2,500. Even a mid-level Soul+ ($17,050 plus $1,000 for the automatic) has about $900 in additional features compared to an identically-priced Scion xB (plus a longer warranty). You can't even get many of the Soul!'s additional features on the Scion. Those you can get are pricey dealer-installed accessories. The Soul's price also undercuts that of conventional compacts like the Hyundai Elantra.

Crossovers have become very popular because their taller stance makes for better forward visibility in traffic. Also, their seats are at just the right height when getting into and out of the car, no need to drop down or step up. The Soul puts this crossover driving position into a smaller package. A further benefit of high seating: more space inside a given footprint. The Soul is only 162 inches long--ten less than a Ford Focus hatchback--but adults easily fit into both rows.

At speeds under 40, the Soul rides fairly well, even on the !'s low-profile 235/45R18 tires (the other trim levels have 16-inch wheels). Above that speed, though, the Soul can ride roughly. Even modest bumps upset its composure. Regularly-spaced tar strips on the highway induce rhythmic bouncing and a d-d-d-d-d-d-d-d patter from the tires. Even a four-hour road trip to Chicago proved taxing. The automatic transmission doesn't help, as it also gets busy at highway speeds. Eco mode calms it.

Given the Soul's compact size and firm suspension, you might expect agile handling. The Soul is in its element in the cut and thrust of urban traffic. But this is the full extent of its dynamic strengths. The chassis does no better with bumps in the road than it does with curves in the road. Body control is poor, with considerable bobble and float. Take a curve at speed, and the Soul plows clumsily. On the highway, the steering feels darty and requires frequent corrections. 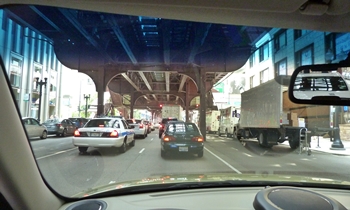 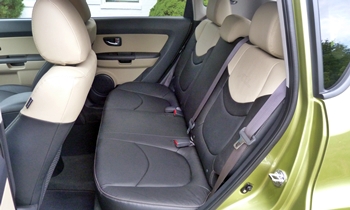 The seat has a deep cushion and is very high off the floor. Much roomier than this photo suggests.

The seats are similarly sufficient for casual around-town driving but subpar for even moderate distances. Less than half way through our four-hour drive the hard, flat cushions grew uncomfortable.

We saw a few Souls being employed as taxi cabs. Between its urban maneuverability and roomy interior, the compact crossover should make for a very good cab--as long as the fare doesn't have luggage. The high seating position does a lot for passenger space, but very little for cargo space. There's only room for a couple of medium-sized duffels without folding the rear seat. The interior would be more versatile if the front passenger seat also folded, as it has in some compact cars, but it doesn't.

The EPA tests suggest that you give up only about one mile-per-gallon with the 164-horsepower 2.0-liter four-cylinder engine compared to the 138-horsepower 1.6-liter, and nothing going from the manual to the automatic. The 2.0/automatic is rated 26 city / 34 highway, not as good as a conventional compact but higher than other similarly tall vehicles. The Soul's height harms fuel economy more the faster you go. You might match the EPA highway number if you can keep your speed under 60. Drive over 70 and 30 MPG becomes just doable, with high 20s common. Some sedans with over twice as much power will do as well, but this is still good for a crossover.

After this review was written, Kia had to revise many EPA ratings downward and compensate owners. The Soul 2.0 AT is now rated 23 city, 28 highway, more in line with what I observed, and considerably less impressive. Even compared to the Soul with the 1.6 (25/30) the cube does a little better (27/31).

The Soul offers a lot of style, space, and features for an affordable price. Performance and fuel economy are also pretty good. But ride, handling, and seat comfort aren't. For casual, in-town driving the Soul does well enough. But if you'll be doing much distance driving, or prioritize handling, you'll be happier with something else. 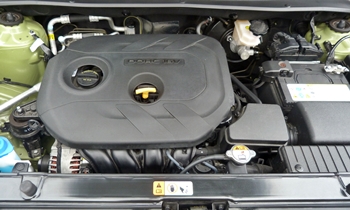 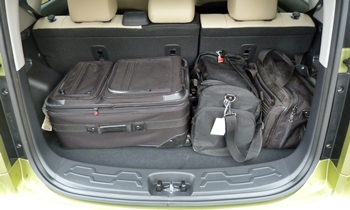 Luggage for two people for a weekend.

One-week loan. Kia provided an insured car with a tank of gas. 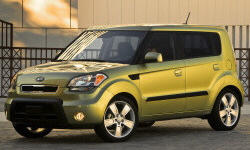 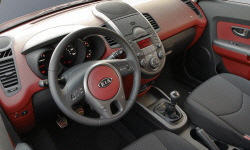