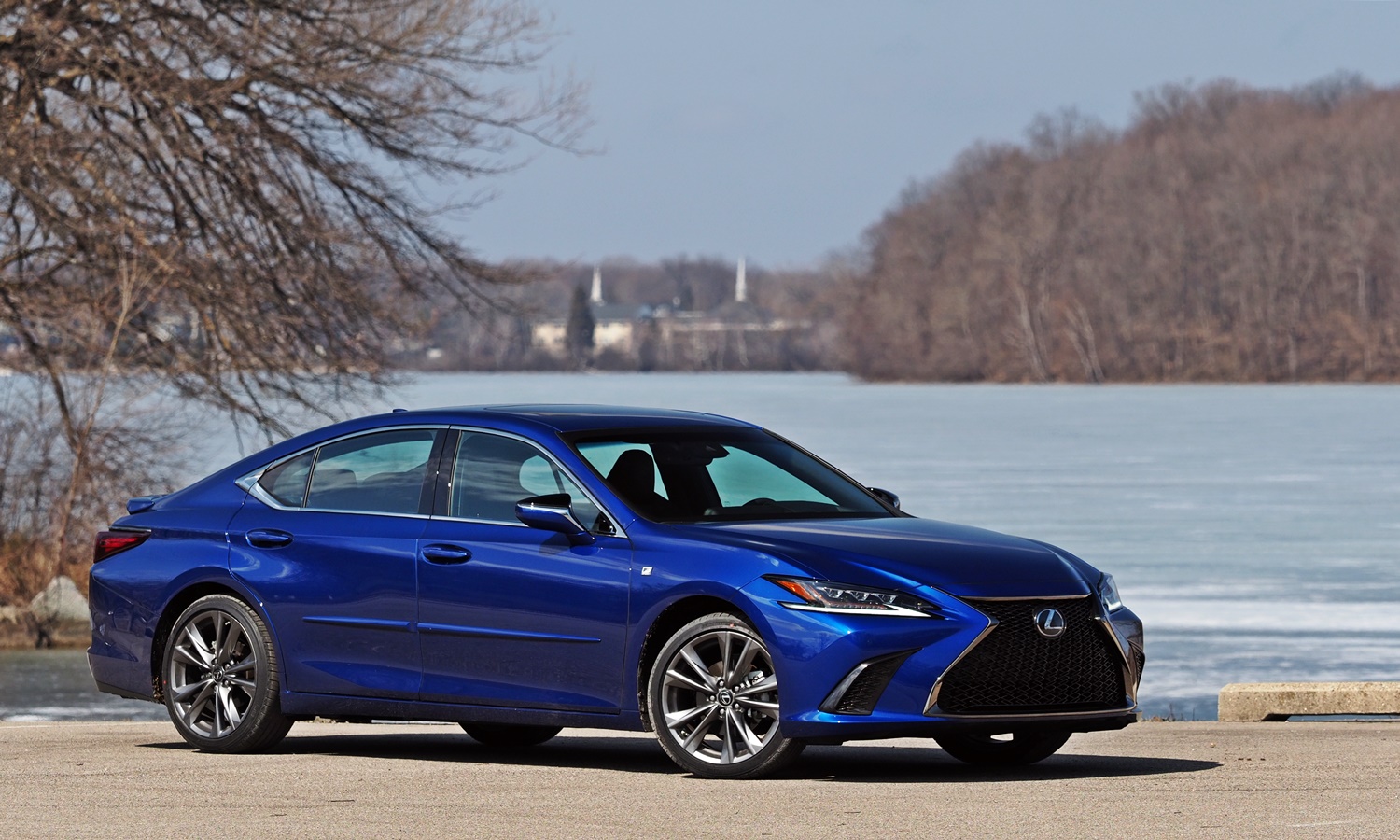 When I posted photos of the updated Mazda6 in Signature trim, some people remarked that had the appearance and interior materials of a $50,000 car, especially inside. 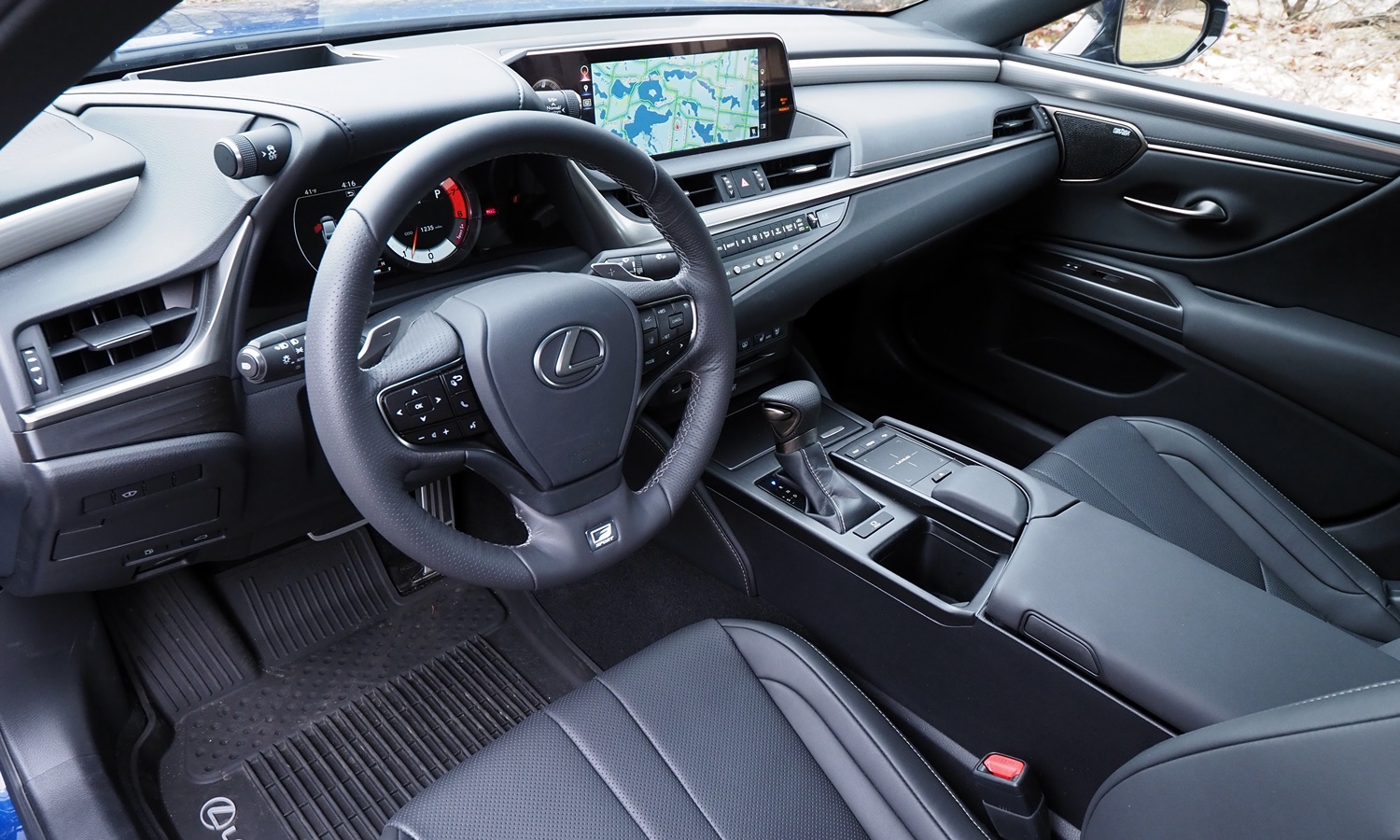 Mazda has tweaked the Mazda6 to reduce interior sound levels nearly every year since the car was introduced as a 2014. The 2018 is a quiet car.

The latest Lexus ES remains significantly quieter. Or at least it sounds quieter. From the beginning Lexus has finessed the interior sound quality of its cars to make them seem especially refined and upscale. It's not just a matter of the quantity of noise, but the quality of the noise that manages to enter the cabin.

Similarly, even in F Sport form the Lexus ES rides more luxuriously. You feel more insulated from tire impacts. Perhaps this should be expected, as Mazda has long prioritized nuanced feedback. While both cars deliver an outstanding ride-handling balance--a first for the Lexus ES--the balance leans towards insulation in the Lexus and towards communication in the Mazda. 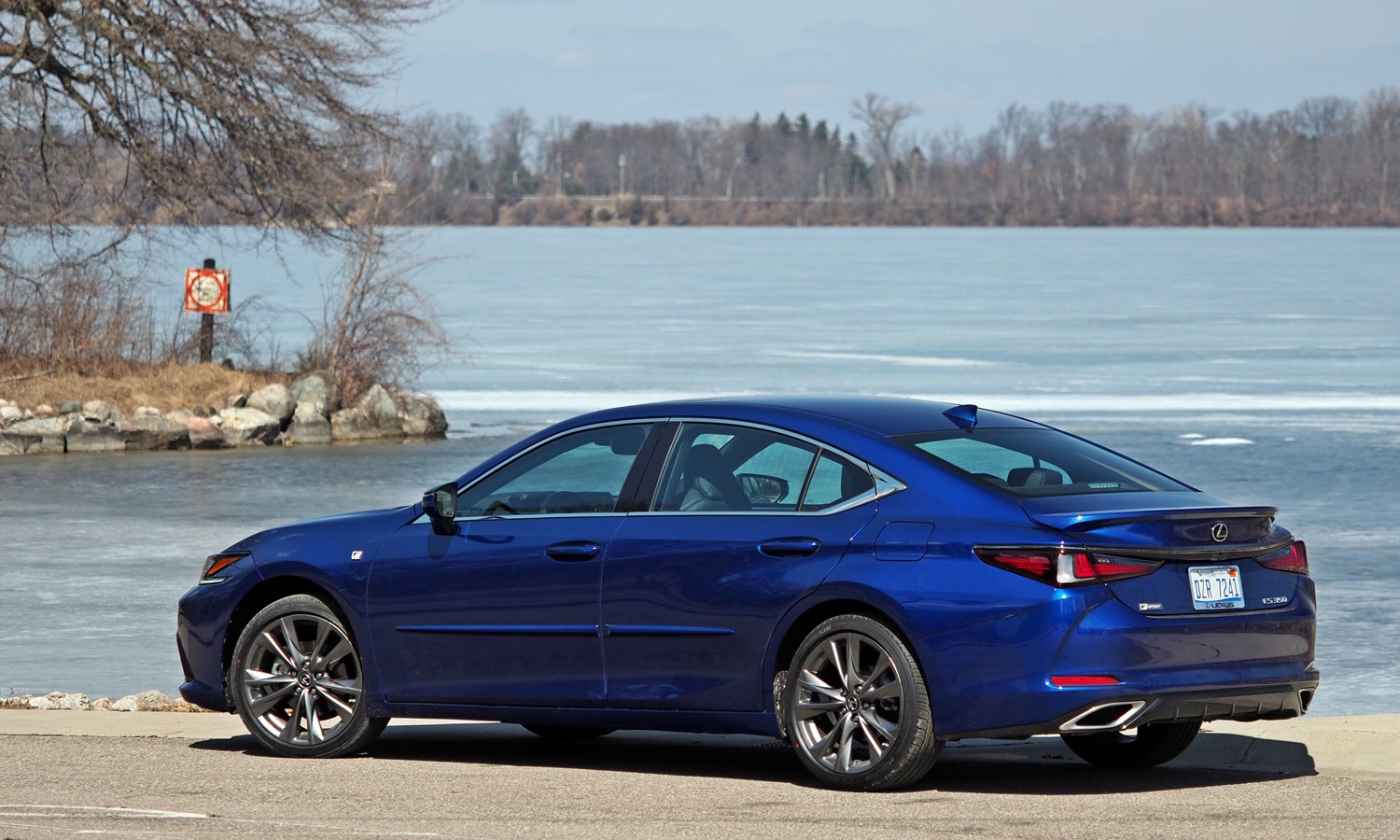 Chrome triangle to complete the side window outline. 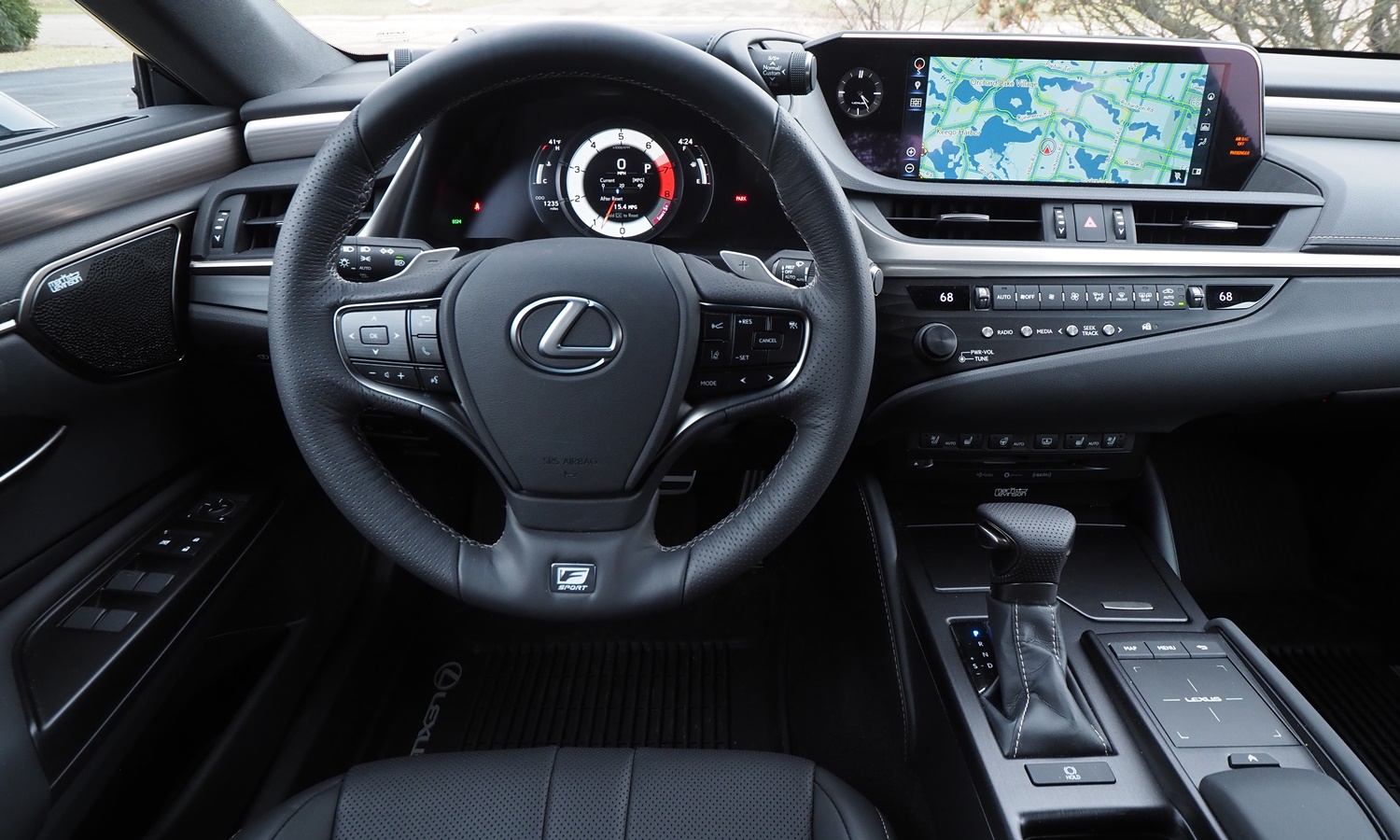 Huge display. Confusing controls. And some hard plastic on the IP.

Although Mazda places a high priority on handling, for some reason it fits the front seats of its four-door vehicles with smallish side bolsters. The front seats in the Lexus ES F sport provide far better lateral support, yet are also very comfortable. They feel more substantial and thus more like the seats of a premium car.

From 2014 on Mazdas have had their front wheels located farther from the passenger compartment than the typical front-wheel-drive car. This opens up space for larger exhaust manifolds behind the engine, for improved performance and efficiency. It also gives the cars more attractive, rear-wheel-drive-like proportions.

But it has a price: reduced rear legroom.

The Lexus ES provides rear seat passengers with much more room to stretch their legs. Sitting in the rear seat, I can barely reach the front seatback with an outstretched arm. While the first few generations of the Lexus ES were related to the Toyota Camry, the 2013 and 2019 are related to the larger Toyota Avalon.

This said, I should also note that the rear seat cushion is the Lexus is mounted somehwat low to the floor, so rear seat passengers also have more need to stretch out if they desire under-thigh support. The new Lexus ES is the sleekest and sportiest to date, and sporty rear roof line's also have a price.

From 2014 onwards the Mazda6 has scored very well in our Car Reliability Survey. But I suspect that once the cars are over a decade old the Lexus ES will tend to require fewer repairs. For those who keep luxury cars a very long time, it's hard to beat a Lexus.

Plus the ES is one of the few cars in its class you can still buy new without a turbocharged engine. While not optimal for low-end torque or fuel efficiency, a naturally aspirated V6 engine bodes well for ultra-long-term durability.

The touchpad-based infotainment interface in Lexuses remains an ergonomic disaster. Many functions are difficult to navigate to. Even for basic operations the system requires an unsafe amount of attention to operate.

A Acura TLX V6 Advance, similar in size and interior room to the Mazda and (with 290 horsepower) similar in performance to the Lexus, splits the difference between the two. If you want AWD, the Acura offers it while the Lexus and Mazda do not.

The Lincoln MKZ with a turbocharged 350-horsepower V6 and front-wheel-drive is priced above the Acura but a few thousand below the Lexus. It can be optioned with a 400-horsepower engine and AWD. 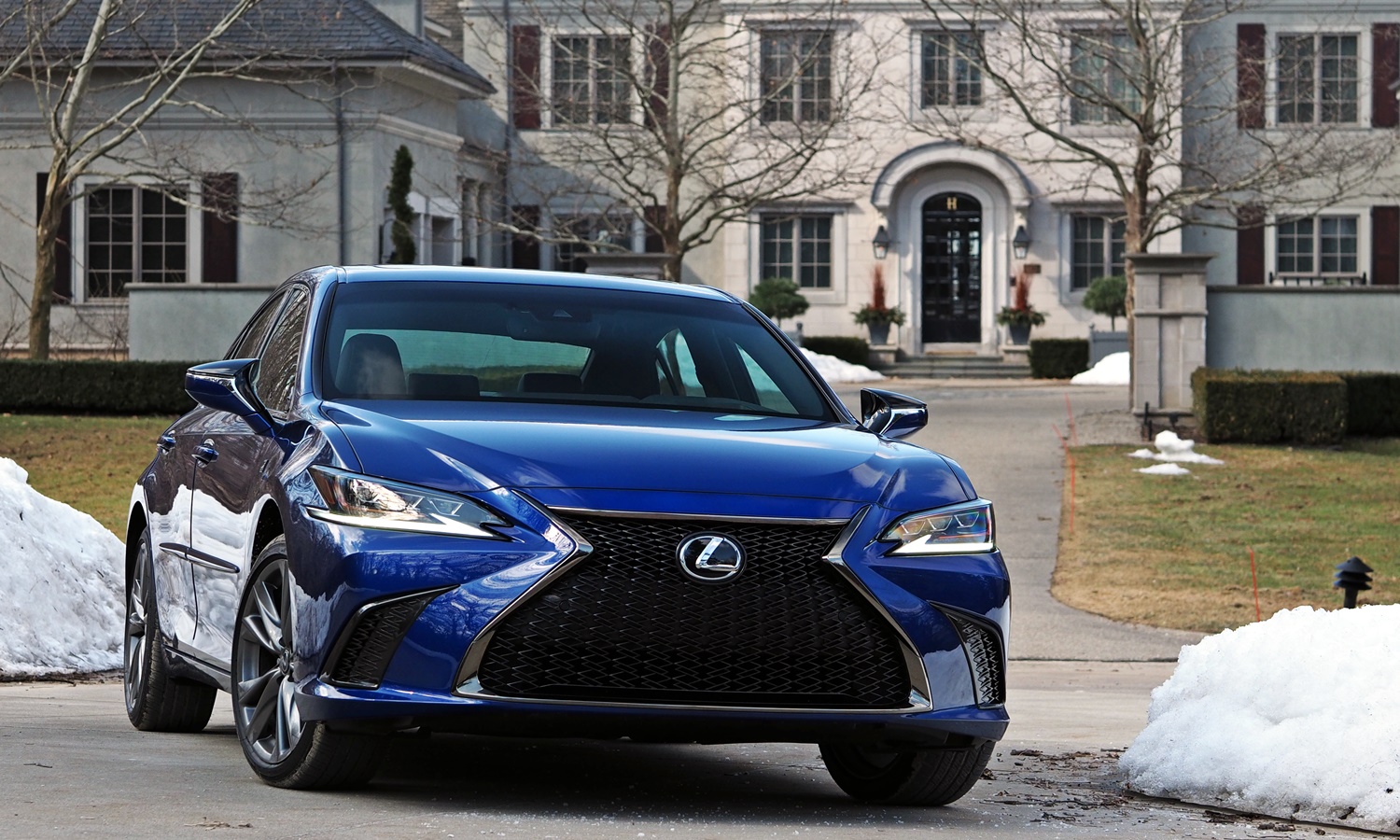 Has Lexus figured out how to make its "spindle" grille look good? 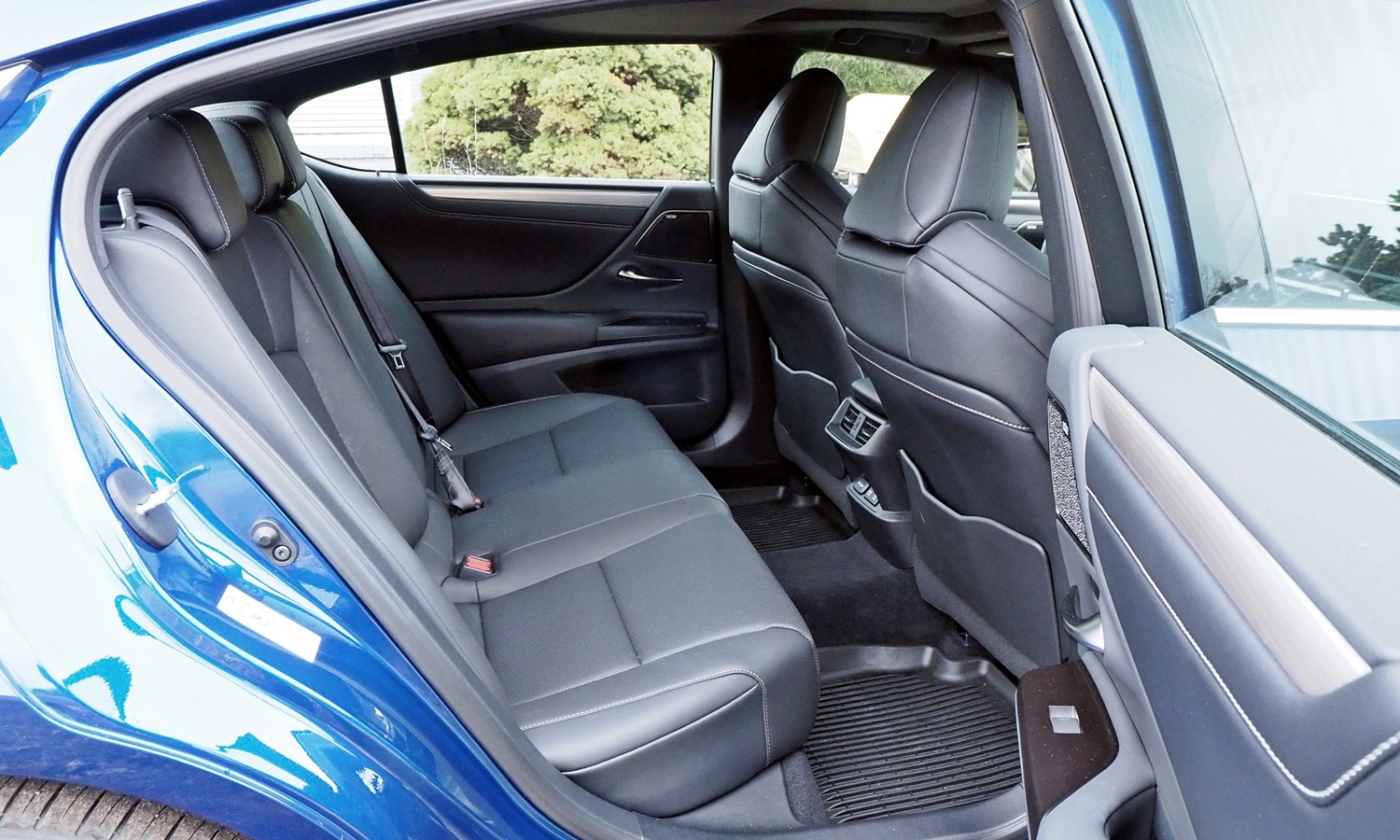 Related to the Toyota Avalon since 2013, the ES has a vast rear seat.

There's only so much that can be done with the sound and feel of a four-cylinder engine. These never produce upscale noises, and that in the Mazda is no exception.

In contrast, the V6 in the Lexus sounds and feels far more sophisticated. It also feels stronger, perhaps because it is, with 302 vs. 250 horsepower. Because it isn't turbocharged, the V6 must rev to really get the ES moving, but it does so happily, aided by a responsive and smooth eight-speed automatic transmission.

The Lexus ES has never been a favorite of driving enthusiasts. The first few generations were soggily tuned to deliver the soft ride desired by the traditional luxury car buyer. The 2013 was the first ES to deliver something resembling decent handling.

With the 2019, though, Lexus finally developed an ES worthy of an F Sport variant. The new F Sport handles well for a largish front-wheel-drive sedan, especially when fitted with the optional ($750) adaptive dampers. Precision, control, and balance are all commendable. I care much more about handling than ride quality, and I could be satisfied owning this car.

Still, the latest Lexus ES feels much larger and heavier than the Mazda6, even though it is only three inches longer and only about 70 pounds heavier. Feedback through the steering and suspension isn't nearly as nuanced as in the Mazda. This says more about the Mazda than about the Lexus, as the latter compares well to just about any other similarly large front-wheel-drive sedan.

In the interior materials category, Mazda scores an upset. The Mazda6 Signature's seats are surfaced in nappa leather rather than a synthetic material. Its interior panels are trimmed with synthetic suede and real wood. Aside from the latter, these panels are extensively soft to the touch. You'll come into contact with much more hard plastic inside the Lexus and in the F Sport the seats are surfaced with a high-quality synthetic leather (i.e. vinyl). If you want real leather and wood trim inside the ES, you must opt for the luxury model rather than the sport model. Not that the ES F Sport seems cheap inside. it certainly doesn't. But the Mazda6 is exceedingly well-trimmed for a car with a price in the mid-30s.

Though Mazda has made great strides in improving the interior materials and refinement of the Mazda6, the Lexus ES remains a different class of car. As smooth and quiet as the Mazda6 has become, even in sport trim the ES feels smoother and sounds quieter, and simply seems more upscale. It's a more luxurious car.

At the same time, in its newly available F Sport form the latest Lexus ES also handles and performs very well. It's no longer a car suited only for people who don't really like to drive. The ES has become an excellent all-around car.

But is the Lexus 50 percent more car than the Mazda6? Probably not. But such things are hardly ever linear. You rarely if ever get a 50-percent-better product by paying 50 percent more. Declining marginal returns are a thing. If you want the most refined largish front-wheel-drive sedan, you want the Lexus ES. But if a car at least 85 percent as good for two-thirds the price sounds like a better value, then check out the Mazda. 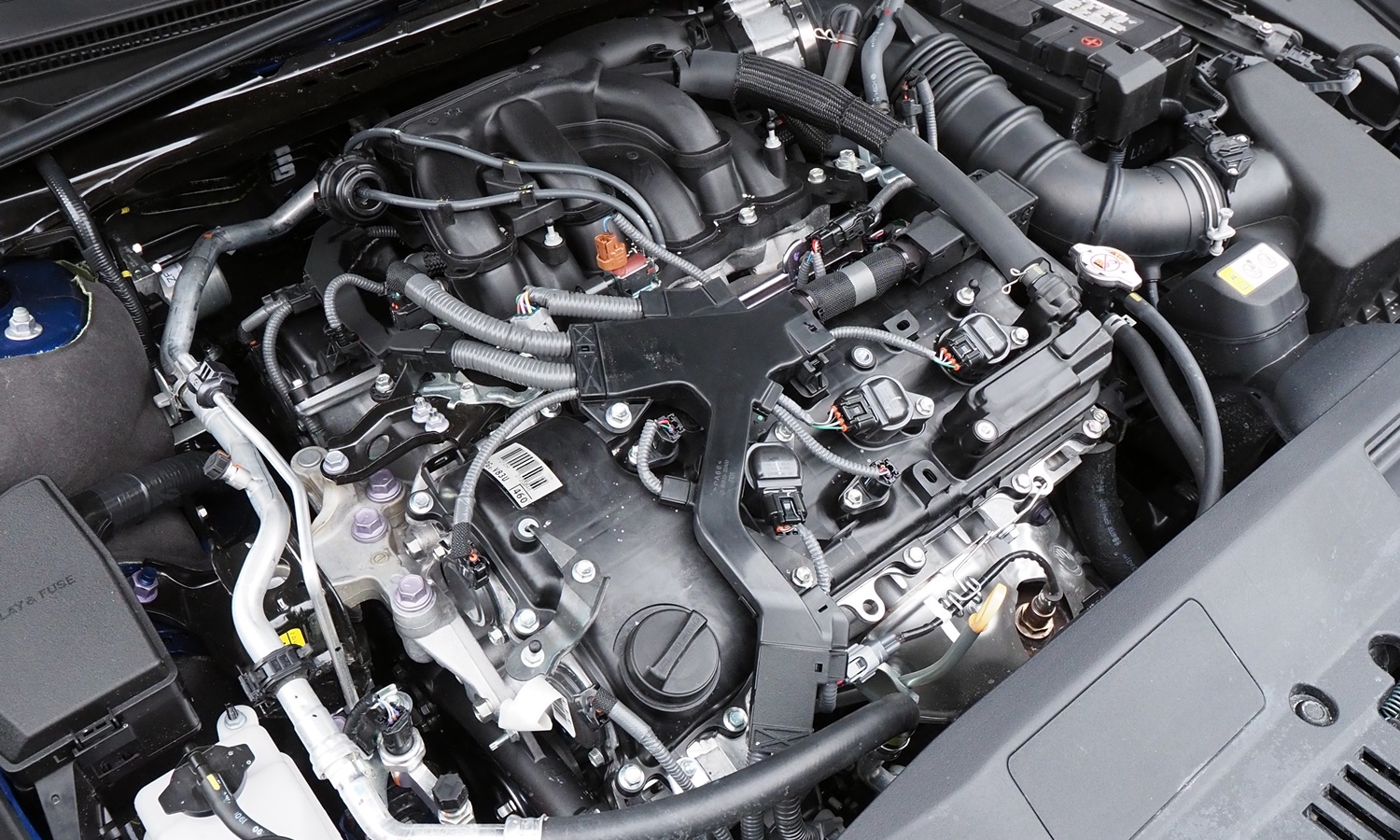 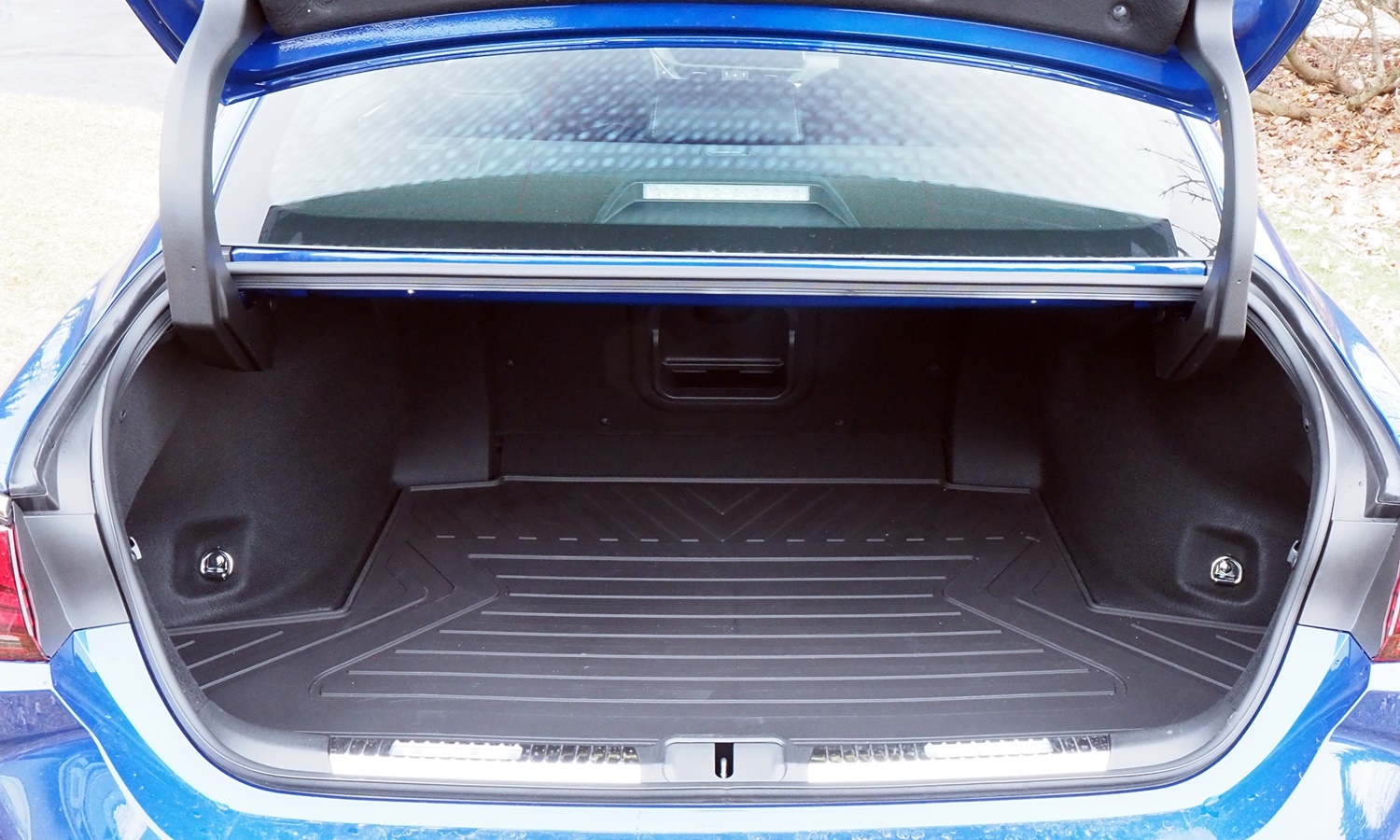 Generous trunk space. Pull down handle in lid unlike Mazda.

Lexus and Mazda each provided an insured car for a week with a tank of fuel.

More About the ES 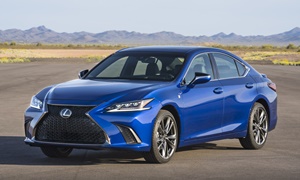 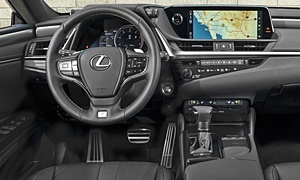