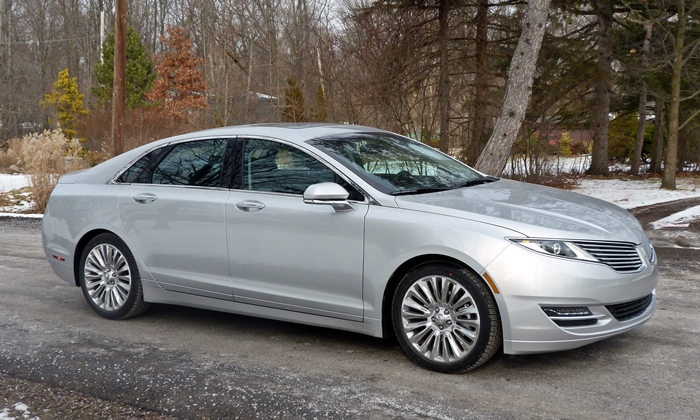 The new Ford Fusion looks and feels like a premium car. So it should serve as an excellent basis for a truly premium midsize sedan. Ford struggling luxury division, Lincoln, could certainly use a winner in this segment. But does the new 2013 Lincoln MKZ sufficiently deliver on the Fusion's potential?

At once sleek and massive, the new MKZ looks like no other car. But is it pretty? more MKZ photos 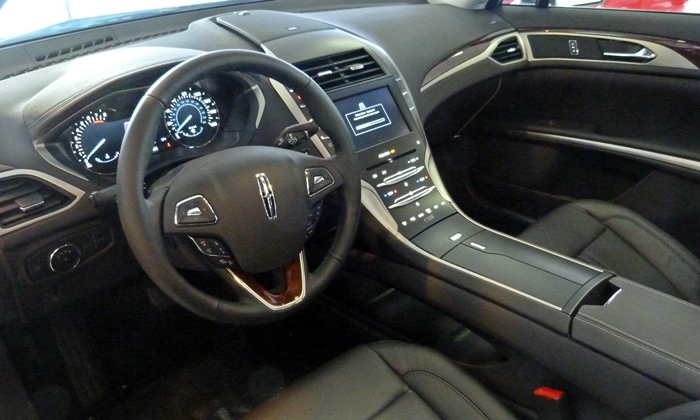 The new 2013 Lincoln MKZ certainly does not lack for features. If something's available on a competitor, it's likely available here, and then some.

Lincoln seems especially proud of a huge single-pane panoramic sunroof that retracts over the rear window. Personally, I don't feel this option provides enough of a benefit over the dual-pane panoramic sunroofs offered in competitors to justify its $2,995 price. The huge piece of glass does span nearly the width of the car, but the opening itself is considerably narrower, likely due to the need to package side curtain airbags. A conventional single-panel sunroof is also offered, for $1,200.

With a mantra ray-inspired instrument panel that sweeps down into a floating center console, vibrant displays, and touch-sensitive controls, the MKZ's interior is not only dramatically different from the Fusion's interior, but simply dramatic. Unfortunately, design intent is one thing, design execution another (see the cons below). 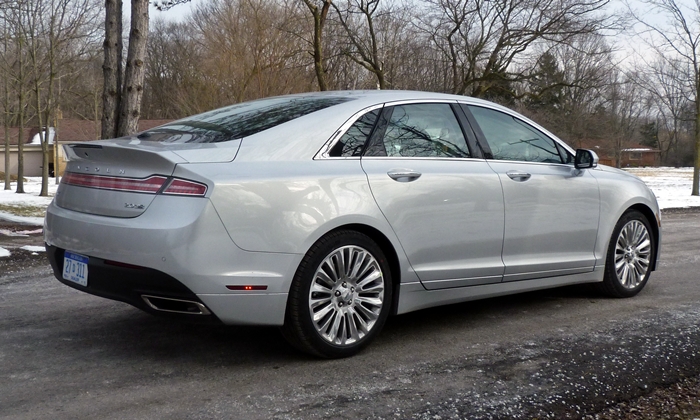 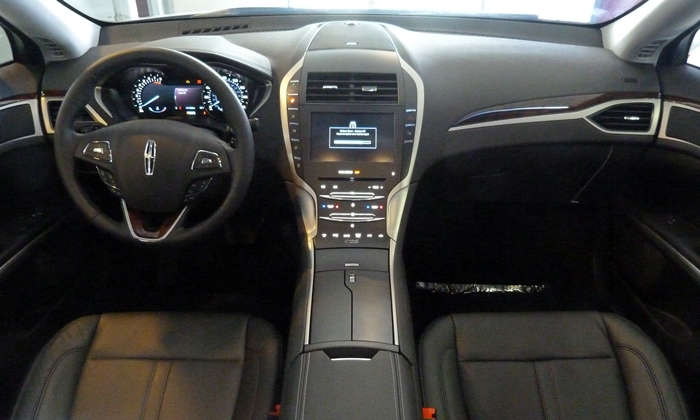 Sleek design, but too plasticky. Full-sized tach, unlike in Fusion.

The Ford Fusion tackles curves with more composure than any other mainstream midsize sedan. The same can be said of the MKZ in its class--as long as we exclude RWD-based sedans from the class. The Lincoln’s multi-mode adaptive shocks have little evident impact on handling, but do reduce the firm suspension's impact on low-speed ride quality. Lighter steering and a lower instrument panel than in the Ford aid perceived agility.

But there is a reason for the above exclusion. Even with the 240-horsepower 2.0-liter turbocharged engine and standard torque vectoring, the MKZ plows in hard turns. With the 258-pound-heavier 300-horsepower 3.7-liter V6, this tendency to understeer should be even more pronounced.

Optional all-wheel-drive helps, but not as much as it could. Without AWD, the front end gets light and shifty under hard acceleration. AWD eliminates this torque steer. But, unlike in the Buick LaCrosse and Cadillac XTS, the AWD system doesn't actively counteract understeer.

I don't personally find the 2013 Lincoln MKZ attractive. The downward sloping yet heavy rear haunches and the large black applique at the base of the rear window don't work for me. But I must grant that the MKZ's exterior design is bold, distinctive, and as futuristic as the interior. Some people are bound to buy an MKZ because they like how it looks.

Seat evaluations are highly subjective. For me, the MKZ's standard front seats are very good, but short of outstanding. Compared to the seats in the Fusion, they're more firmly contoured but have smaller side bolsters. The optional multi-contour seats might address the bolster deficit. But few people are going to drive this car in a manner that requires much lateral support.

The MKZ starts at $36,800 and can top $50,000. Comparably-equipped, it's a few thousand less than a Lexus ES or Acura TL. But it's nearly $10,000 more than a comparably-equipped Ford Fusion before adjusting for feature differences, and about $5,500 more afterwards. Yet despite much additional bling (or because of it), the MKZ seems cheaper inside than the Fusion. Most of the blame goes to the center stack / center console, which looks and feels overly much like what it is: a large swath of hard plastic. The much-hyped buttons for the transmission feel cheap when pressed, as do the often-used switches on the steering wheel (the chintziest bits in the Fusion as well).

Most of the fits are precise, but for some reason Ford designed the instrument panel trim to not quite align with that on the doors. Consequentially, this particular fit appears shoddy.

To top the Lexus and be worthy of its premium over the Ford, the Lincoln's interior requires a few further upgrades.

Rear seat headroom and knee room are borderline tight in the Fusion. In the MKZ they're tighter still. Six-foot passengers might still fit, but not comfortably. Even without sufficient space for toes beneath its front seat, the Lexus ES's rear seat is far roomier. 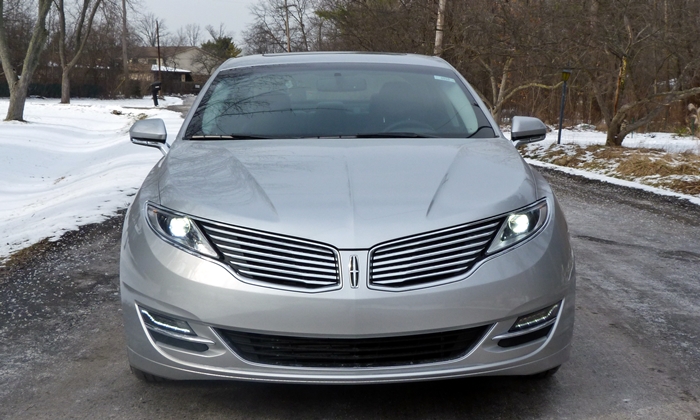 Split-wing grille, derived from classic Lincolns, will be controversial. 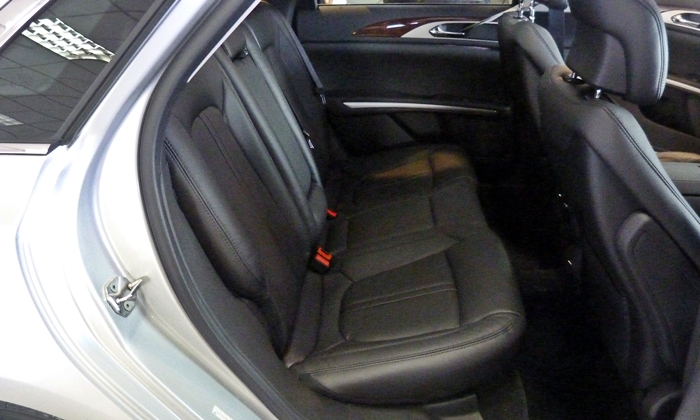 As in the Ford Fusion, the base of the windshield is high and distant, harming forward visibility and driver confidence. The view forward seems more open in the Lincoln because the instrument panel drops down from the base of the windshield, but it's still far from ideal. In the other direction, visibility is limited by thick rear pillars and, when open, the optional large sunroof.

I don't have a sixth "why not" to work with, so I'll slip a mention of the MyLincoln Touch control system in here. As in other Fords and Lincolns, the system has improved, but some virtual buttons and touch-sensitive controls remain too small and too closely space to tap without taking your attention off the road for a few potentially critical moments.

The Fusion is among the quietest mainstream midsize sedans. The Lincoln MKZ adds active noise control and acoustic laminated glass in the windshield and front doors to further suppress noise. Nevertheless, the MKZ isn't significantly quieter than the Fusion inside. As in the Ford, if to a slightly lesser degree, you hear tire impacts more than in some more softly suspended competitors.

But the real noise problem is the four-cylinder base engine. This engine has a buzzy soundtrack that's only marginally acceptable in the Fusion. In the Lincoln, it strikes the ears as entirely out of place. Though Lincoln's V6 doesn't sound nearly as sweet as that in the Lexus, it's a must-have $1,230 option for acoustic reasons alone even though both handling and (perhaps) fuel economy suffer.

Either non-hybrid engine is hobbled by the same unresponsive, occasionally clunky six-speed automatic transmission. Due to this transmission, lazy throttle tuning, or both, the powertrain often hesitates when called upon to scoot. Between this hesitation, the tendency to plow in hard turns, and limited forward visibility, the subjective driving experience falls well short of the objective competence of the chassis. With a few tweaks, the MKZ could be much more fun to drive.

The MKZ with the 2.0T engine is EPA-rated 22/33 mpg with FWD, 22/31 with AWD. This barely tops the V6-powered ES, and in the real world likely trails the Lexus. A front-wheel-drive Fusion 2.0T, with EPA ratings of 22/34, averaged 19.5 mpg in suburban driving during the week we drove it. With AWD in the heavier Lincoln, real-world fuel economy could get ugly. Step up to the V6, and the EPA figures fall to 19/28 with FWD and 18/26 with AWD (though mpg might not suffer at all outside the lab).

Then again, the MKZ is available with a hybrid powertrain rated by the EPA at 45 mpg for both city and highway driving--at no additional cost over the base engine. Even though this powertrain can't seem to approach these impressive numbers in the real world, it's far more efficient than the other two engines. It's the clear choice for buyers who place a high priority on fuel economy.

Between its styling and its features, Lincoln clearly tried to create something special with the new 2013 MKZ. And some bits do impress. But others fall short, and the whole comes across as inconsistent and even inauthentic. As it stands, the MKZ is a very good car. People considering an Acura TL or Lexus ES should check it out. (After all, those cars aren't perfect, either.) But I cannot shake the feeling that, with some tweaks to the interior and powertrain, the MKZ would be more thoroughly satisfying as both a luxury sedan and a driver's car. 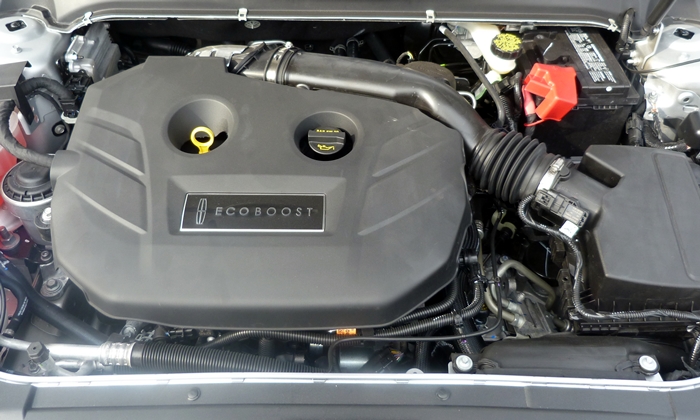 The cover must be purely decorative. 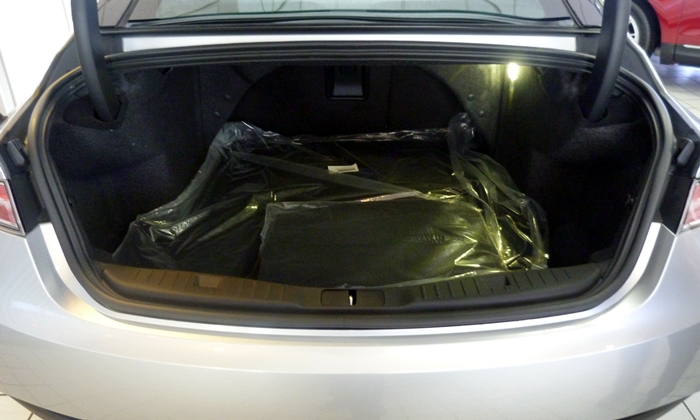 Also smaller than in the Fusion, but more competitive than the rear seat.

More About the MKZ 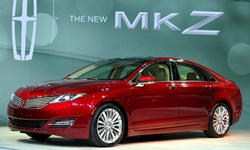 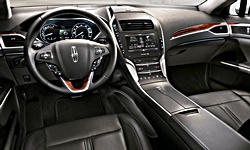