2003 Mazda Protege Pros and Cons at TrueDelta: Sufficient Different- and Better- Then the Sedan by steveboudreaux

The P5 has enough upgraded equipment and features- and is built on the assembly line Mazda intended for it's still-born luxury line (intended to compete with Lexus, Infinity and Acura,) which makes it a different car from the Protege sedan. In often over-looked gem. The Mazda 3 and 6 are both good cars, but I consider myself lucky this one came along for me before either of those did.

(I am trying to edit my review- not sure if that is what I am doing, so if this is a duplicate review, I am sorry.) In 2007, my trusty Ford Ranger finally but the dust (although I would replace the motor) after over 300,000 miles. I narrowed my choice down to the Mazda 6, Mazda 3 and Progete5, and decided to buy the first good deal on any one of them that came along. I turned out to be the P5, and I am happy it happened that way. If a 3 or 6 had "presented it's self" I would have gone that way. I believe the P5, being somewhat rare (only imported to NOrth America in 02 and 03) is relatively unknown. Pity, both that it was not available earlier, and that it is often overlooked- in many ways it is a better car and a better value than it's sedan brother, the Protege.

Although the "zoom-zoom" campaign ended, Mazda still enjoys a performance- and excitement-orientated reputation- deservedly so. The RX-7, RX-8 and Miata, and the historical use of rotary engines established that, from the beginning. Professional reviewers often called the Protege5 a "5-door Miata," and it is accurate- this is a zippy, fun-to-drive little car, as much fun as a Miata is (with the top up, at least,) and for a smaller car, cargo room is great. This was my first Mazda-branded vehicle (Ford Rangers and Mazda B-Series trucks were build on the same assembly line, the only differences being cosmetic) and it will probably NOT be my last.

It was actually "overall performance" that clicked for me, but there is only a "powertrain" category. This is not a fast car, but it is a quick, zippy one. Top speed that I have observed was 120 MPH (indicated,) but the car is powered and geared for good take-offs and lower-gear acceleration- the kind that gets noticed the first time one drives the car, even if not being drive aggressively. 1st gear does wind out early, though- but no matter, there are four more! Braking and handling are very good, too- the P5 was only available with 4-wheel discs, somewhat taunter suspension, 16" wheels and even a shock-tower brace, standard, whereas the Protege sedan came standard with rear drum brakes, for instance. The P5 is also 5 inches shorter, overall, which makes for a sportier appearance, if not feel. MSN autos calls the P5 a "sports wagon." So true.

The car does get excellent fuel economy- IF you can keep your foot out of it. I rarely succeed in that endeavor- the car is just too much fun to drive, the embodiment of "driving a slow car, fast."

With almost 20 square feet of cargo room, I have been amazed how much stuff I can get back there- the seats fold up quickly and easily, and the backrest are easily removed (seat cushions, not so much, but still doable, if you really need to cart some stuff. The car tows a smallish utility trailer well, too, even if the manufacturer's recommendations might be low- I was probably over the limit (towing, not legal drinking,) at least once or twice, with no problems.

Hey, it's a small car. Which results in a, well, small car- inside. Like most makers, Mazda puts higher priority on front seat room than rear. Logical- most small-car owners have small families, either in number or physical size. What are you gonna do?

This is not a horrible story, but there are some issues. The right front bearing carrier seems to wear out fairly quickly, causing the bearing to get "cocked" inside the carrier and thus wear out, too. A word of advise- if you need to replace the RF bearing, make darn sure the carrier is good, or you will be replacing the bearing again in about 20,000 miles, maybe less. Fortunately, the bearing carrier is the same as on the Protege sedan, so used one are cheap and easy to find. Oddly, too, the low-beam head lights tend to burn out too soon, too- Mr. Karesh, the admin of this site, confirmed he has had to replace the low beams more than twice, too. I can think of no reason for this, but there it is. Otherwise, the car is very reliable.

Be aware of front wheel bearing and low-beam issues, and you will do fine with this car. 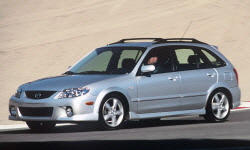 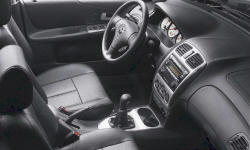