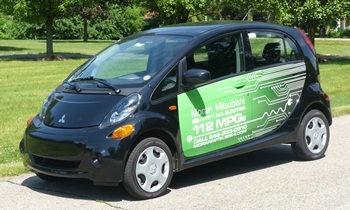 We all "know" that electric vehicles (EVs) are the future. But how soon will we want one? One impediment: the requisite high-capacity battery packs are expensive, making for scary window stickers. But the Mitsubishi i-MiEV isn't only the cheapest EV. After a $7,500 federal income tax credit, it's only $22,475. Add another grand for a home charger, and it's still less than the typical family sedan. But what other sacrifices are entailed? 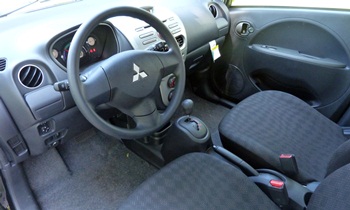 The #1 reason to buy an i-MiEV is obvious: it burns no gasoline, and not much electricity, either. In EPA tests the 16kWh battery pack lasted 62 miles. With a delicate foot on the pedals, it'll go farther. At typical rates for electricity, a full charge costs about two dollars. Even the most efficient hybrid costs about twice as much to fuel. Over 12,000 miles with gas at $4.00 a gallon, you'll save about $500.

The #2 reason might seem obvious, given that this is the cheapest EV. But if you can afford to spend another $6,075 you can get a Nissan LEAF instead. Not an insignificant sum, but the LEAF is nearly as efficient and is otherwise better, even much better, in just about every way. Oh, and the LEAF includes about $4,000 worth of additional standard features. The i-MiEV is about as bare bones a car as you can get in the U.S. Compared to the cheapest hybrid, the Toyota Prius C, the i-MiEV costs over $5,000 more once feature differences and the cost of a home charger are factored in. It will likely take over a decade to save that much in fuel costs. 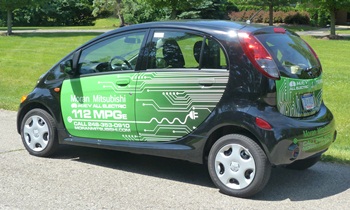 Not a line out of place from this angle, either. 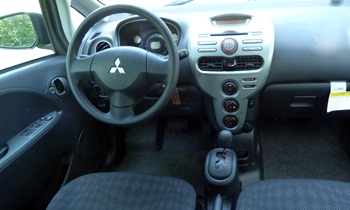 Could hardly be more basic.

For a car that is only 144.7 inches long and 62.4 inches wide but 63.6 inches tall, the i-MiEV is quite stylish. It could have looked far worse. But will Americans consider such a diminutive egg-on-wheels to be a real car?

For such a small, light car (this strength must also be qualified) the i-MiEV rides smoothly. It helps that the wheelbase is over 100 inches, about even with cars that are a foot or two longer.

Adults won't have any room to spare in the i-MiEV's back seat, but they will fit. This counts as a strength for the same reason ride smoothness and exterior styling do.

The basic specs--light weight, rear-wheel drive, slightly rear-heavy weight distribution--suggest that the i-MiEV might be a blast along a curvy road. This could hardly be farther from the truth. Perhaps because the car is taller than it is wide, Mitsubishi's engineers designed the suspension and undersized the front tires so that the i-MiEV would heavily understeer (start sliding at the nose) at very low speeds. The car is also far out of its element at highway speeds, where it feels tippy and twitchy. There's a reason cars this size aren't typically offered in North America.

To package four adults in a very short car, Mitsubishi's engineers mounted the seats very high. Not a problem, maybe even a plus, in itself, but add in the egg-shaped exterior and the windshield header intrudes into sightlines. You must stop well short of the mark to view traffic signals without leaning forward. 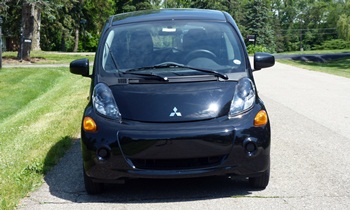 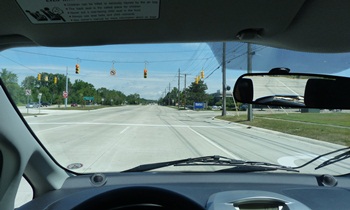 Even by cheap car standards, the i-MiEV is stripped to the bone. The steering wheel neither tilts nor telescopes. There's no system to track fuel efficiency or driving style over time. A base Prius c has about $1,600 in additional equipment.

The front seats are very close together. And, even after adding an inch for the North American car, your shoulder is quite close to the B-pillar. Anything else with four doors is much roomier inside.

Flat out, the i-MiEV is quite slow, taking over 13 seconds to get to sixty. But this doesn't bother me terribly much as the car feels plenty energetic in typical suburban driving. EVs, like hybrids, also simply feel right when driven casually. Their powertrains are just so liquidy smooth.

The Mitsubishi i-MiEV is cheap for an EV, and cute, but you get what you pay for. Actually, less than you pay for. There's a reason cars this small and bare bones generally aren't sold in North America.

More About the i-MiEV 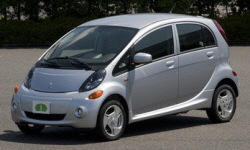 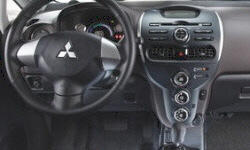