2017 Nissan LEAF Pros and Cons at TrueDelta: The first generation electric car for the masses got a lot of things right. by truedelta

A member in Maryland, United States

The final year of the gen 1 Leaf was never going to be exciting. It's a quiet, competent car that works for a lot of (sub)urban driving. How well the 30 kWh battery pack (introduced in 2016) holds up has yet to be determined, though Nissan at least provides a substantial warranty. A 100-ish mile range will look pretty meager as more 200+ mile EVs are introduced, though it's still useful enough for my household to be the only car for a family of four.

I think the roofline is attractive, and the 17" wheels look nice.

This is THE THING about electric cars. The quietness and lack of vibration make for a different driving experience. The Leaf is very quiet for a car of its class and is its most luxurious trait.

Cargo capacity is surprisingly good for a family of four with young kids. I've never folded the seats because of car seats, but hatch area seems more usable than the Prius we had. (I'm a big hatchback and wagon proponent.)

We got a tremendous deal on this late gen 1 car. The net price was less than the lowest MSRP for any 2017 car. The state of Maryland contributed $3000, plus 40% of the charging station and electrical circuit.

The speedometer, clock and exterior temp being visible above the steering wheel is great.

The climate controls are aggravating. First, the up/down buttons for temp and fan look too similar and are too close to the radio volume and select buttons. I appreciate that there are physical buttons for some functions (instead of needing to poke at the touchscreen), but the mode button for airflow must be pressed repeatedly. The auto mode is cancelled whenever any parameter is changed, unlike my previous Prius, which would allow cancelling A/C or toggling recirc while maintaining the auto mode. Turning on A/C seems to always enable recirc mode. I get that it saves energy, but I want fresh air unless it's really, really hot or I'm behind a stinky vehicle. Or maybe I'll choose to use it until the cabin cools. Anyway, I find the recirc scheme to be way too aggressive. I read in Leafs forums that you can press and hold the recirc button for a couple seconds to enable auto recirc, a mode that mixes in more fresh air than full recirc. I find the operation of that mode to be clumsy, plus there's no visual indicator that it's still active after you've made other changes. So I nearly always cancel recirc after selecting A/C.

The materials feel like a step down from the 2006 Prius I had previously. Especially the headliner and seats. It certainly feels quite a bit cheaper than the 2013 VW Jetta TDI wagon I had before that. As the first mainstream electric car, I get that the cost is in the battery pack and other electric drivetrain components, and that it's effectively an economy car otherwise.

It's a comfortable car overall, though the ride feels a little lively (and not in a good way) over bad pavement. To me, it feels like too much compression damping and not enough rebound. (This seems to be typical of Japanese cars, at least by comparison to German ones, realizing this is a broad generalization.) The spring rates feel appropriate for a car of this type.

The steering is the worst aspect of the driving experience. It's highly assisted and slow. There's very little road feel, though at least it's accurate. If not for the steering, it probably could be a fun car to drive. The saving grace of this car is that the weight is low (batteries under floor), so it doesn't roll much in corners unless badly provoked. And then, of course, it understeers badly enough to not reward enthusiastic driving.

Minimal storage, which may not matter since this isn't a long-haul car. A coin tray or a larger center console bin would have been nice. The little tray ahead of the shifter is nice for phones.

The regular headlights (non-LED) are a bit feeble. And the horn is wimpy. Rounding out the list of minor gripes is the loudness of the startup chime. Why can't I at least make it quieter? Imagine that your kids are about to drift off to sleep in their car seats, then DING! as you power up the car after a stop.

The nav system seems to be about on par with other automakers' systems. That is to say, still well behind Google Maps in terms of usability and performance. This is one of the downsides of the Gen 1 Leaf: no Android Auto or Apple CarPlay. 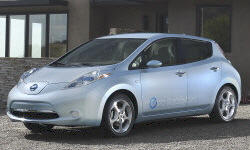 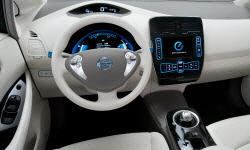