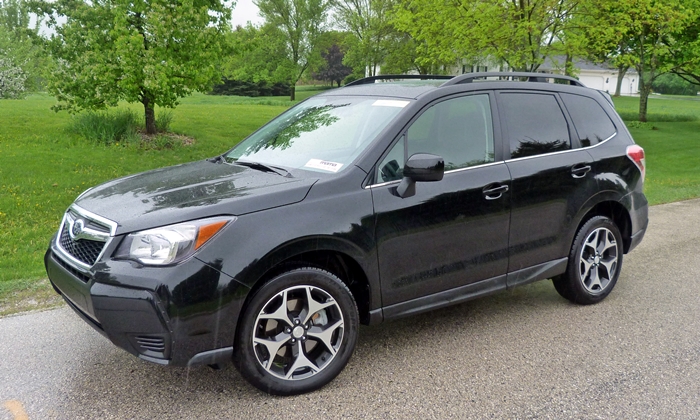 These days, just about everyone offers a compact crossover. After all, this is perhaps the hottest segment in the market due to its combination of practicality, maneuverability, fuel economy, and affordable pricing. Where does this leave Subaru, which used to rely on all-wheel-drive in compact vehicles as a unique selling point?

Pretty well off, apparently. No one else, not even production-constrained Hyundai, has a harder time keeping cars on dealer lots. You'll be hard-pressed to find a Subaru dealer with many (even any) redesigned 2014 Foresters in stock. Why are they selling so well?

The regular, 170-horsepower Forester competes with compact crossovers from a slew of other manufacturers. The turbocharged, 250-horsepower XT (tested) has far fewer direct competitors. Mazda and Toyota no longer offer a performance engine option. Honda and Nissan never have. Among those that do, the Ford Escape 2.0T comes closest in size and power. 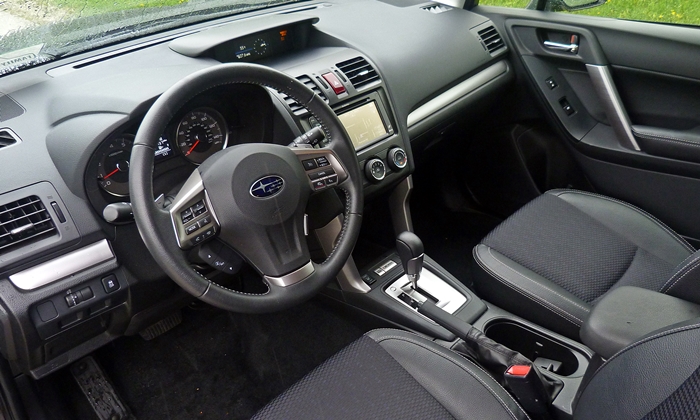 Materials are good, but the ambiance nevertheless lags due to functional, dated design.

Many manufacturers, in making their compact crossovers sleeker and swoopier, seem to have forgotten why many buyers buy crossovers in the first place. Not Subaru. The new Forester's windshield isn't laid way back. Its roof is high, but its beltline (base of the windows) isn't, and doesn't sweep dramatically upward until its last few inches. The pillars separating the new Forester's unfashionably large windows, even those at the back, are thin by current standards. Add it all up, and visibility is outstanding in all directions. This said, as in any crossover the base of the rear window is high enough that low objects (such as small children and bicycles) aren't visible through it. A rearview camera is standard on all but the least expensive Forester model.

In the more stylish Ford Escape, the view forward is dominated by a deep instrument panel and the view rearward is constrained by a raked beltline and thick triangular D-pillars.

Beyond visibility, people buy crossovers to get more space for people and cargo. As in previous Foresters, the 2014's ceiling is very high. I could have worn a top hat inside. If you're very tall, and have been seeking a compact vehicle in which you'll easily fit, you've found one.

Passengers will find just as much room in the comfortably high rear seat. At 81 inches, there's more combined legroom than in any other compact SUV--and nearly four more inches than in the Escape. The Chevrolet Equinox offers another tenth of an inch, but with a 188-inch length (vs. the Forester's 181) and 4,083-pound curb weight (vs. the Forester XT's 3,624) it's not truly compact.

Subaru has worked no such miracles with shoulder room. At 56.5 inches, it's typical of the compact class. Add in a small driveline hump (absent in the Honda) and three adults won't happily share the rear seat for long. But how many car owners put three adult-sized people in the second row for long, anyway? More of a negative for rear seat comfort: unlike the Escape (but like nearly all other compact crossovers), the Forester has no rear air vents.

Thanks to the tall, square rear body, cargo space is also the best in the segment, though not by as large a margin as the rear seat. 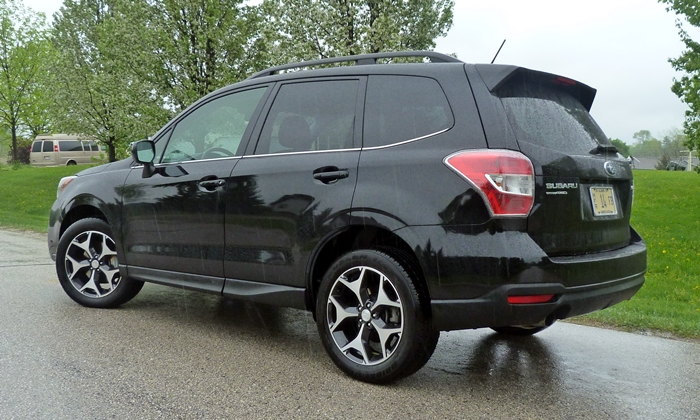 Probably the new Forester's most stylish angle. But this isn't saying much. 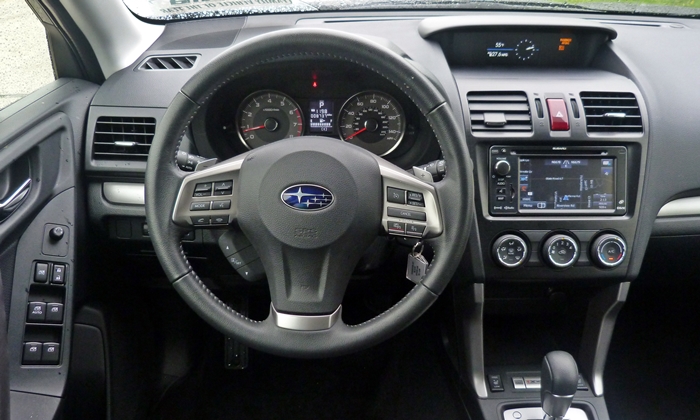 Simple, easy to understand and use controls--except for the nav.

There's more to comfort than space. People also buy crossovers because they ride better than conventional, truck-based SUVs (if still not as smoothly as cars). Within the current bunch, the Honda CR-V is perhaps the most softly suspended. It can feel a touch wallowy, and poorly paved roads can disturb its composure. At the other extreme, the latest RAV4 borders on harsh. Though their manners are more polished than the Toyota's, the Ford Escape and Mazda CX-5 also fall towards the sporty end of the spectrum. In this group, the new Subaru Forester XT strikes the best balance for all but the most sport-minded drivers, with a ride that is both well-controlled and smooth. (The non-turbo Forester, which I have not driven, has a softer suspension.)

Last year's Forester XT paired a 224-horsepower 2.5-liter turbocharged flat-four-cylinder engine with an antiquated four-speed automatic. The 2014 has a smaller engine--a 2.0-liter--but it's good for 250 horsepower. Even better for performance and fuel economy, it's paired with a continuously variable transmission (CVT). With a conventional automatic, engine speed (and thus output) drops with each shift. The fewer the gears, the more dramatically it drops. The CVT has a much broader range than the old four-speed transmission and, with no discrete gears to shift among, can hold the engine at its power peak when maximum thrust is called for.

Some drivers don't care for CVTs, as they can thwart a sense of connection with the engine and even make acceleration sound and feel unnatural--the dreaded "rubber band" effect. The Subaru unit, though not quite as direct in feel or as quick to react as Honda's, is among the better examples of the bunch. Paired with the turbo engine, it largely avoids undesirable slipping sensations. Take advantage of the Sport or Sport+ driving mode, and the CVT mimics a six-speed or an eight-speed conventional automatic transmission, respectively. Manual shifts can be summoned via the lever or paddles mounted to the steering wheel. These modes also significantly quicken throttle response; in the default, "Intelligent" mode, the Forester XT feels considerably less alive.Thanks to this new powertrain, the Forester XT is about as quick as an affordably-priced compact SUV gets. Judging from various road tests, it will get to 60 mph in a bit over six seconds, while the heavier, CVT-free Ford Escape will take nearly seven.

So why isn't powertrain performance closer to the top of this list of "why to buys"? Partly because performance doesn't rank among the key reasons people buy this sort of vehicle, and the Forester does so well in the areas that tend to be top priorities. But also because this powertrain accelerates the Forester so smoothly that there's little thrill to be had from the experience. If you want performance for practical reasons, such as passing on a two-lane highway, the Forester will deliver. If you're seeking thrills, not so much. No need, practical or otherwise, for a rocket ship? Then the regular, 170-horsepower Forester should do.

The turbo does have a bit of a fuel economy penalty, especially on the highway. Its EPA fuel economy ratings are 23 mpg city, 28 mpg highway, vs. 24/32 for the non-turbo engine. The Escape checks in at 21/28. These EPA ratings assume a casual driving style. With any turbo a heavy right foot will dramatically reduce fuel economy.

The tested Subaru Forester, an XT Premium with navigation, isn't actually available. For reasons unknown to me Subaru put this combination in the press fleet, but hasn't made it available to dealers. So if you want heated seats or navigation, you'll have to step up from the $28,820 XT Premium to the $33,820 XT Touring. On the non-turbo Forester Premium the nav and all-weather package adds $1,600. The rest of the $5,000 price jump goes toward leather upholstery, power liftgate, dual-zone automatic climate control, and a 440-watt Harman/Kardon audio system. This seems a bit much for the additional features. So unless you really want them, the XT Premium is the better value.

A 2013 Ford Escape 2.0T AWD with 18-inch wheels and panoramic sunroof lists for $31,195, nearly $2,400 more than the Forester XT Premium. This said, with the Forester in such short supply Ford dealer discounts and factory incentives will narrow this gap considerably.

The redesigned Subaru Forester doesn't handle badly. Far from it. It steers easily, and handles safely and predictably. Driving the new Forester could hardly be more pleasant. But, even with the XT's sport suspension it doesn't feel sporty or especially fun. For that the Escape is a better choice. If power isn't a consideration, the Mazda and Toyota also feel more taut and responsive.

Subaru has upgraded the Forester's interior, adding more soft-touch surfaces and contrasting stitching. Even so, the ambiance remains practical and functional--even dated--rather than upscale or sporty. Some parts continue to look or feel plasticky. The Escape, designed with the European market in mind, is more stylish inside. Then again, some people find the Ford overly styled inside. Practicality has its fans. 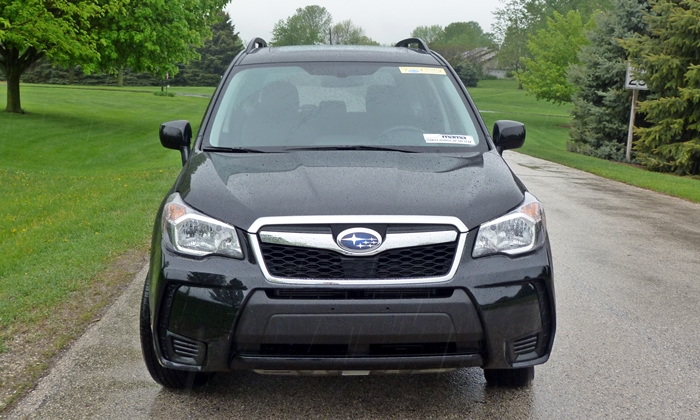 XT adds more aggressive bumper cover, but (unlike in the past) no scoop. 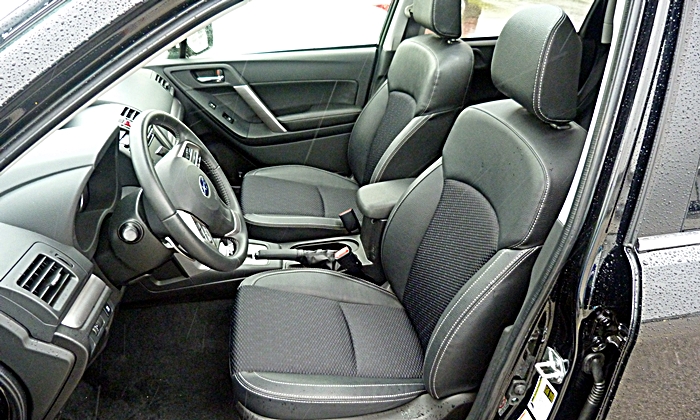 Much the same goes for the new Subaru's exterior. Few past Foresters have sold because of how they looked, and this won't be changing with the new one. The new body is more square and less evenly proportioned than its predecessor, much less au courant competitors such as the Escape. As noted earlier, though, the Forester's boxier shape pays dividends in visibility and interior room. Which are higher priorities for you? If you've bought Subarus in the past, probably the practical stuff.

Worth noting: unlike past turbocharged Foresters, the new one doesn't have a hood scoop.

A final "why not" applies only to Foresters with the navigation system. As noted above, this system was on the tested vehicle, but isn't normally available on the XT Premium. Well, with the nav even basic audio functions are so difficult that you probably don't want the system anyway. Everything but volume must be handled through the touchscreen, and the displays are poorly designed. Even the Ford Escape's much-criticized MyFord Touch system is easier to understand and operate.

If you're seeking Audi style or BMW handling dynamics in an affordable compact crossover, the new 2014 Subaru Forester isn't your best bet. Even with a turbocharged engine and sport suspension it's not much fun to drive. And Subaru clearly remains a company where engineers dictate styling to the designers. But if you don't expect a compact crossover to be strikingly attractive or thrilling, and you do care about roominess, visibility, and ride quality, then the new Forester is the best of the current bunch. Just don't expect much of a discount from the reasonable sticker price, as plenty of other people have figured out that Subarus aren't just for Birkenstock-shod granola-eaters anymore. 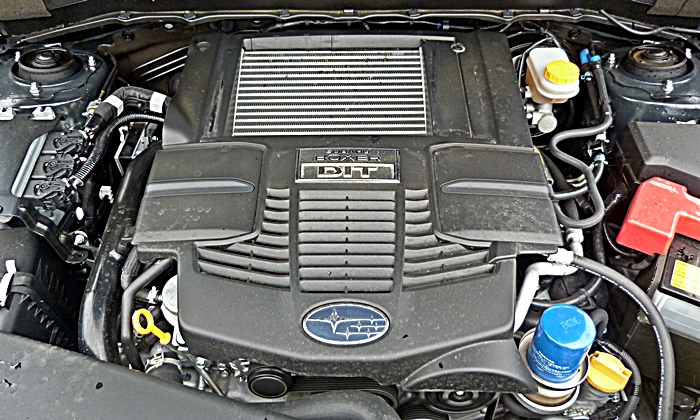 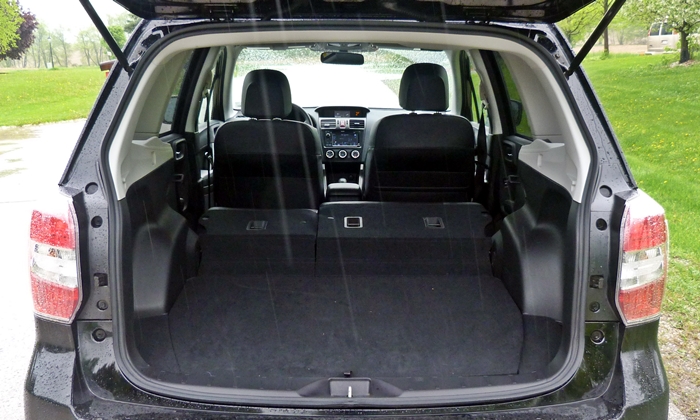 Me and wife are considering sticking with subaru for her next vehicle purchase but, not until they bring the manual transmission with the turbo charged engine in the forester will we do so. Since they now make them in canada how long until someone realizes that this should also be an option in the us?

I'd love to see them offer a manual transmission with the turbo engine. But I don't think they offer such a combination in Canada, either. Or Europe or Australia--we maintain a list of powertrains for all of these regions. 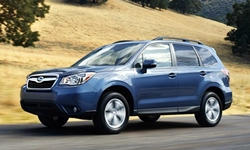 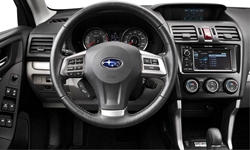