2016 Subaru Outback Pros and Cons at TrueDelta: Our Experience...An Unsatisfactory Car by pjjsmgm2000

The Subaru Outback was an expensive disappointment. We drove it for about 33,600 miles in town and on the highway. However, it did not compare well to the 2013 AWD Honda CR-V that we drove for nearly 30,000 miles prior to trading it for this car. We loved the Subaru premium radio, we loved its "Eye Sight" collision avoidance system, its lane departure warning system and several other safety features that were not available on the 2013 Honda CR-V when we purchased that car. However, now that Honda has caught up on their versions of these systems, we felt that it might be a good idea for us to replace this Subaru with a new 2018 model Honda CR-V AWD. We thought we would wait until it reached closer to around 36,000 miles, but after suffering two separate breakdowns on a long trip from Maryland to Florida, we traded this car in for the new CR-V while in Florida.

Before the breakdowns (dead battery and faulty charging system and other electrical problems) we had already felt let down by the 4 cylinder Outback's underpowered engine, especialy when compared to the CR-V. This is even more disappointing because the gas mileage of the Outback is lower than both the 2013 and 2018 CR-V's.

So, to summarize our feelings about this 2016 Subaru Outback Limited 4 cylinder,...It is a disappointment. We recognize that this represents our personal preference and it may also reflect a "brand loyalty" that we have developed for Honda. We have owned and leased 2006, 2008, 2009, 2011, 2014 and currently own a 2016 Honda Accord, and now a 2918 CR-V AWD. We owned a 2011 and a 2012 Honda Civic and a 2013 Honda CR-V AWD. Surely, this means that we have a clear preference, but we have also given Subaru an opportunity to satisfy our needs, and it seems that we prefer and trust Honda

The fuel economy of the 2016 Subaru Outback is disappointing. Again, I owned and drove a 2013 Honda CR-V and it offered better performance and acceleration, and far better fuel economy than this car. This, despite the fact that the Subaru Outback and Honda CR-V show fuel economy ratings that are fairly close in the government measurements. Well, I drive this car the same way that I drove the Honda CR-V and also the several Honda Accords that I have owned. My gas mileage on this Subaru is consistently lower than it is and that it has been on the Hondas that I have owned and driven. This lower gas mileage coupled with the less imprssive acceleration and performance represents my biggest disappointment with this Subaru.

The audio system on the 2016 Subaru Outback high end model is the best that I have ever owned. I will miss this feature should I decide to trade this car for a Honda CR-V because of other reasons. However, the navigation system is just OK. It is fine (when it isn't malfunctioning). In fairness, I should probably take the car to the dealer to see if they can fix the navigational system quirks. However, I may not keep this car much longer, so I will likely just live with the minor problems until I trade it in for something else. It has simply stopped functioning (frozen up) on about four separate occasions. Whenever this has happened, the only "cure" is for me to pull off to a rest area, or other safe place, turn off the engine, and then restart the car. Each time,this has restored the navigation system to good order.

We finally traded this Subaru for a 2018 Honda CRV. The Subaru gave us two separate problems on a long trip. After obtaining service from an independent repair shop to get us on the road (cleaned fuel injectors) the car once again failed us while parked overnight. It would not start. The problem involved both the battery, the alternator and other electrical system components. Some repair cost would have been covered by warranty, and some would have had to be paid by us.Subaru sent a repaqir person who got the car running again. We drove to a Honda dealer and traded it instead of having to depend on it to get us back home. We were over 1000 miles from home. The car had 33500 miles on odometer. We lost confidence in it.

More About the Outback 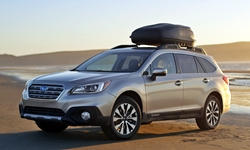 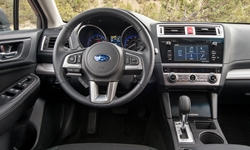