2014 Toyota Highlander Pros and Cons: Why (Not) This Car? 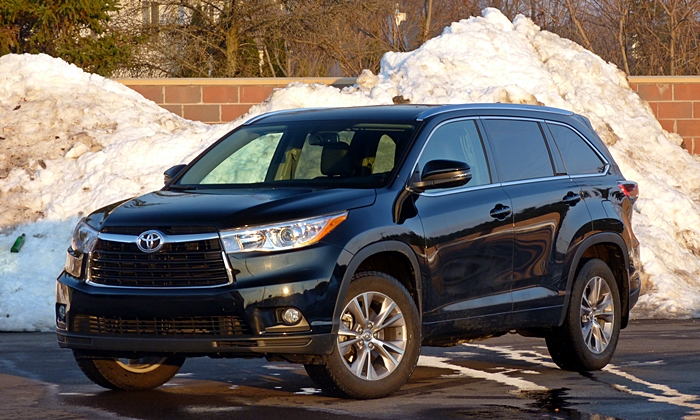 Toyota has been struggling to find itself. Recently revised models feature bizarre styling details and surprisingly firm suspension tuning in a bid (not terribly successful thus far) to no longer be perceived as transportation appliances. With a largish mainstream model like the Toyota Highlander, this mission gets tricky, as few people buy three-row people haulers in search of sporty styling or athletic handling. Yet buyers of crossovers must be seeking something beyond a transportation appliance, or they'd buy minivans. What does the redesigned 2014 Highlander offer these buyers that competitors don't?

Which competitors to focus on in this review? The Highlander's archrival, the Honda Pilot, last fully revised for the 2009 model year, is approaching its own redesign. But two other key competitors, the Nissan Pathfinder and Hyundai Santa Fe, were new last year. 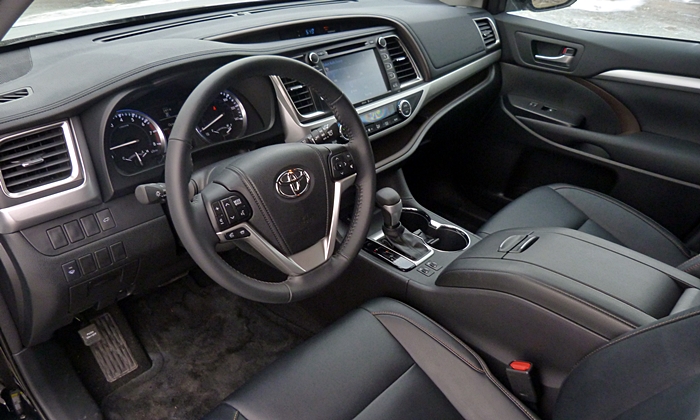 More upscale interior. Don't care for black with brown highlights? Tan and gray are other options.

The Toyota Highlander's top draw remains reliability. While the crossover has been thoroughly revised, its engines and transmission have been around for years. Direct injection as in the Hyundai? A continuously variable transmission (CVT) as in the Pathfinder? You'll find neither raising doubts about long-term durability beneath the hood of the Toyota. Looking at past Highlanders, you'll find a happy face for every year with sufficient responses in our car reliability survey (which covers through the end of 2013 at the time of this review).

Both the Nissan and the Hyundai have experienced teething pains over the past year.

The sexiness continues with the second "why to buy." The 2014 Highlander includes scads of places to stow your various knick-knacks, including a center console capable of holding over a case-and-a-half of 12-ounch cans and a shelf spanning most of the width of the lower instrument panel. At the other end of the vehicle, there's some concealed storage beneath the cargo floor. 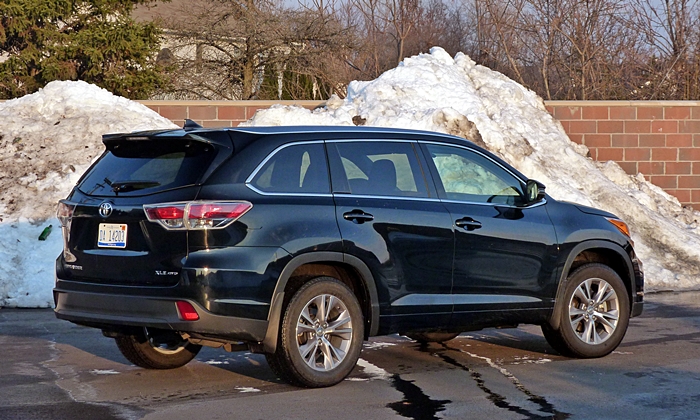 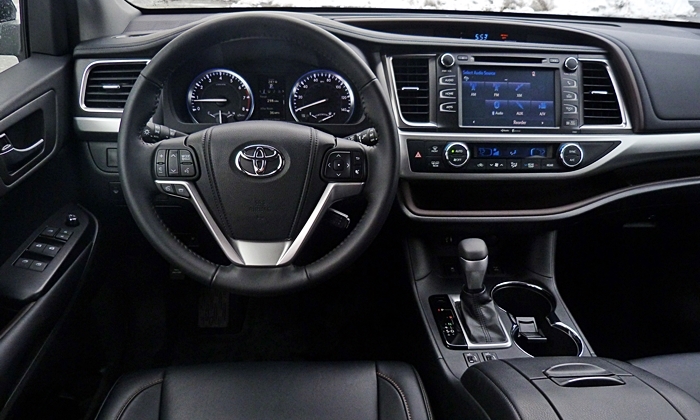 Touchscreen a little too far away, and washes out too easily. A shelf for your stuff.

While the Highlander's 3.5-liter engine does not include the latest tech or produce the most power, it remains the smoothest, sweetest-sounding V6 you'll find in the segment. Hitched to a six-speed automatic (offered only with the four-cylinder engine in past years), it feels stronger than its 270-horsepower rating.

The Pathfinder and Santa Fe can also get to sixty mph in under eight seconds, but the Nissan doesn't sound or feel nearly as good in the process and the Hyundai's peakier engine doesn't provide as reassuringly solid a shove in typical driving.

Fuel economy is about the same for all three crossovers. With all-wheel-drive (AWD), the Highlander earns EPA ratings for 18 mpg city, 24 mpg highway. The Santa Fe is rated the same, the Pathfinder a single mpg high (likely thanks to its CVT).

Toyota offers two other engines in the Highlander. A 185-horsepower four-cylinder available only on the front-wheel-drive LE is much weaker and was just a single mpg more efficient in the EPA's testing. The V6 is easily worth the additional $1,305 Toyota charges for it. A hybrid V6 gets better fuel economy, especially in the EPA city test (27/28), but partly because you can't get it in XLE trim costs nearly $10,000 more. Limited-to-Limited the difference is still $6,200.

Toyota led its direct competitors in sound suppression through the 1990s and into the 2000s, but in recent years some of these competitors have caught up. The 2014 Highlander is quieter than its predecessors, and about even with the Pathfinder in this regard. Especially on a concrete highway the Santa Fe is noisier than the other two, perhaps because minimizing weight was a top priority. Though a little longer than the Toyota (193 vs. 191 inches), the Hyundai weighs over 350 pounds less (4,098 vs. 4,454).

The Toyota 4Runner, one of the last true midsize SUVs, oozes ruggedness. For 2014, a fair amount of the 4Runner's macho, rock-solid character has been injected into its car-based relation. The Highlander's suspension absorbs large bumps especially well. While the Hyundai and Nissan ride more smoothly over some minor road surface imperfections, neither feels as substantial. And when the bumps and chuckholes get larger, the Santa Fe loses a fair amount of its composure. The Highlander's quietness, supportive front seats, rigid body structure, and steady ride combine to deliver reassuring, relaxing comfort both on the highway and around town.

Many of the Highlander's controls are too far away to reach without leaning forward a couple inches. Opt for voice commands, and a tedious system requires specific phrases in an unsuccessful attempt to mimic natural conversation. The most likely phrases are listed on the central LCD, but this display washes out in sunlight.

But those three people best be small, as the Highlander doesn't have nearly as much rear legroom as the Pathfinder or the Santa Fe. To fit children of even middling size in the third row it's necessary to slide the second row well forward.

The second row seat cushion is mounted too low for adult comfort. The Nissan's second row suffers from a similar shortcoming, but the Hyundai's does not. 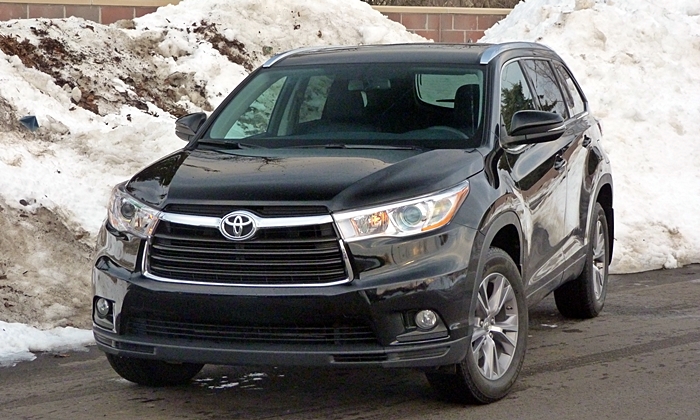 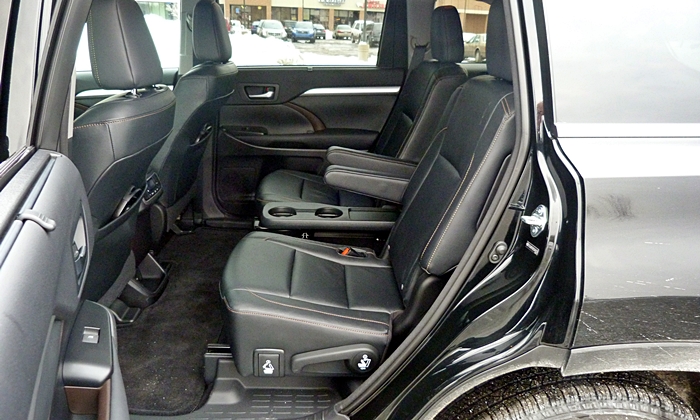 Optional captain's chairs include foldaway tray table. Too low to the floor for adults.

With both rows folded, all three crossovers can theoretically carry about 80 cubic feet of cargo. With either row of seats up, the Pathfinder has a modest edge over the other two. Even with the Nissan families will have to choose between using the third row seat and fitting more than a few pieces of luggage inside the vehicle. The 2014 Highlander might have 30 percent more cargo volume behind the third row than the 2013 did, but 13.8 cubic feet still isn't viable for a travelling family. A Sienna minivan can hold nearly three times as much back there. With minivan-like wells behind their third-row seats, the Honda Pilot and Ford Explorer are the most luggage-friendly three-row crossovers. But, with the segment's only remaining separately opening rear window, the Highlander's cargo area is the easiest to access

Many of the latest safety features, including forward collision, lane departure, blind spot, and rear obstacle warnings, are only available with the Highlander Limited. My favorite safety feature, an around-view camera system, isn't offered at all. You can get this feature on the top-trim Pathfinder, but the Nissan (perhaps in an attempt to give the related Infiniti QX60 some unique features) doesn't offer many of the warning systems.

The Highlander's new exterior appears more aggressive than the old one, with a larger, more truck-like grille. More muscular bulges around newly cladded wheel openings contribute to a more athletic stance. In line with the current Toyota fashion, the lamp assemblies have grown and the rear ones protrude.

Especially from the front quarter I personally find the new styling ruggedly handsome, but opinions are bound to differ. (What's yours?) From the side the 2014's extended overhangs appear too long for its unchanged wheelbase. But aside from these proportions a large number of design elements are integrated well. Chrome side window moldings with a BMW-like kink take the overall look in both upscale and sporty directions. While the fender bulges emphasize the Highlander's height, these moldings pull the eye rearward, creating an intriguing tension. The XLE's 18-inch wheels, though smaller than the 19s on the Limited, don't appear overly small.

The Highlander's interior has received an equally dramatic upgrade. Unlike in the Pathfinder, the upper surface of the instrument panel is soft to the touch. Stitching is an upscale detail, but (as on some other recently designed Toyota and Lexus models) the soft-touch surface is a little too shiny to pass as upholstered. A hard plastic steering wheel hub with molded in "stitching" can be found in a number of other current Toyotas, and should be banished from all of them. It's easily the most unattractive aspect of the interior.

The dramatically styled instrument panel design includes four horizontally flowing levels. Add in the stitching, stitching, both silver and black trim panels, and (in the black interior) brown highlights (including the stitching on the seats), and the overall look might be a bit much for some people. But, aside from the steering wheel hub, I personally find the Highlander's new interior more attractive than those in the Pathfinder and Santa Fe.

In casual to moderately aggressive driving, the Highlander's handling feels stable and secure, with some of the trucky flavor of the 4Runner to distance the driving experience from that of a minivan. Push the Highlander harder, though, and it leans, plows, and threatens to lose its composure. While the Pathfinder feels more ponderous, the Santa Fe feels much more agile and car-like. The Mazda CX-9 remains the driver's choice in the segment.

While the front seats are generally comfortable and supportive, I personally found the headrest too far forward. Your experience will differ depending on your build.

Inexpensive these vehicles are not. A $1,810 rear seat entertainment system (with a double-width display and Blu-Ray compatibility) and $275 "captain's chairs" (second-row buckets) pushed the list price of the tested mid-level XLE (with standard sunroof, leather upholstery, and nav) over $40,000. A Limited Platinum AWD with nearly everything standard (except the roof-mounted entertainment system, which isn't compatible with its panoramic sunroof) lists for $44,450.

Drop those two options and the XLE AWD lists for $38,360. A similarly equipped Pathfinder SL lists for $40,010, $1,650 more than the Toyota. A Santa Fe GLS with sunroof, leather, and nav lists for nearly as much, $39,955, but includes nearly $2,000 in additional content. Adjust for this content, and it's about even with the Highlander.

The Toyota Highlander continues to offer less room for passengers and cargo than most competitors. And its ergonomics need work. But its V6 powertrain remains excellent, its interior has been pleasantly upgraded, and its new styling and chassis tuning are more SUV than minivan. Add in a strong reliability record, and the new Highlander should be a top choice for buyers who don't need the sportiest handling or the roomiest interior. 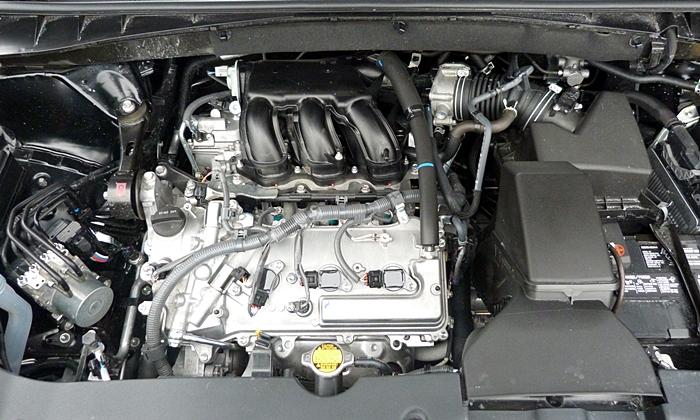 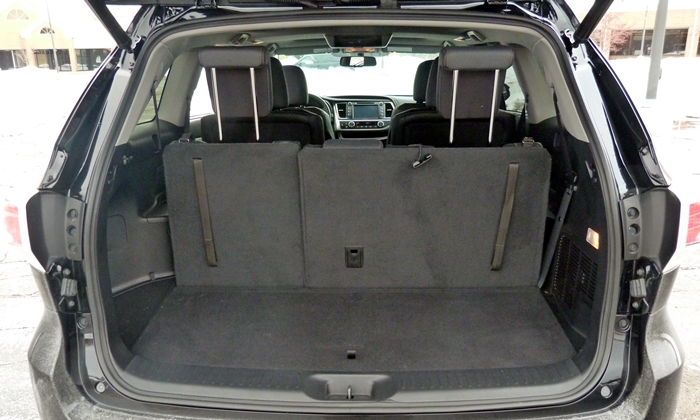 Thirty percent more cargo volume behind the third row. Still not much.

We are thinking of buying a Highlander but after reading all the posts and this revuew...I am not so sure now. I gave always wanted a 4-Runner but I CAN'T STAND the new grill look...UGLY!! So now we have some more thinking to do.

This review was largely positive. What aspect turned you off the Highlander? Interior space?

I just bought a highlander. It lacks the interior cargo space my 2003 4 Runner had. It handles better though.

More About the Highlander 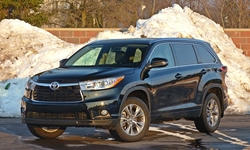 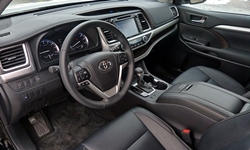