2015 Volkswagen Passat Pros and Cons: Why (Not) This Car? 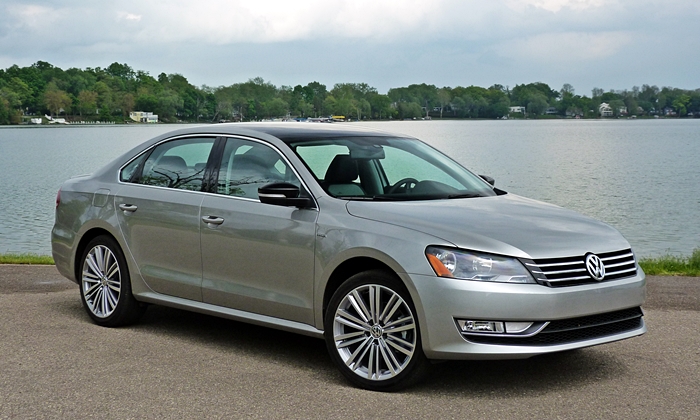 In an effort to revive interest in the Passat, part way through the 2014 model year Volkswagen began offering its aging midsize sedan in Sport trim. The Passat Sport is powered by the company's new 1.8-liter turbocharged engine, and is available with a manual transmission, albeit one with only five ratios. How does it stack up against the driver's choice in the affordably-priced midsize sedan class, the Mazda6?

The Sport's wheels are larger, but their multi-spoke design is more elegant than sporty. more Passat photos 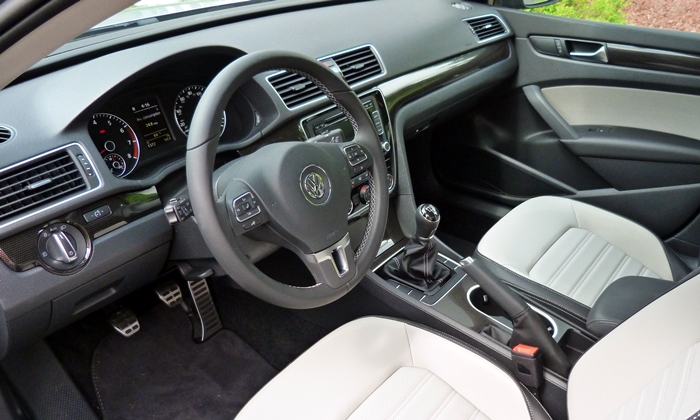 Shift paddles and metal pedals have little impact on the otherwise spartan interior.

The Passat's top strength remains a non-sporting attribute: never mind how the specs compare, the midsize Volkswagen has the roomiest interior in its class. Rear seat legroom seems limo-like compared to the merely adequate space inside the Mazda. Up front, there's also plenty of stretch-out space for heads, shoulders, and knees. The Passat's trunk is also among the largest, though in this area the Mazda comes up only a cubic foot short.

The view forward is excellent in both the Volkswagen Passat and the Mazda6. Both cars have relatively large windshields that are not overly raked. When checking for traffic to the sides and rear the Passat edges ahead, with a lower trunk, thinner pillars, and larger windows.

Then there's the driving position. If someone never pointed out the location of the Passat's steering wheel to you, you might never notice anything odd. But once someone does mention that the sedan's steering column is offset to the right, you can't stop noticing this, especially not when driving with both hands on the wheel. The likely cause: when developing the North American Passat off the platform for the less beamy North American Jetta, Volkswagen moved the driver seat to the left more than they shifted the steering column to the left.

Overall, I've rated this area a draw between the two cars, since the Volkswagen provides better outward visibility while the Mazda has a better, near-perfect driving position. 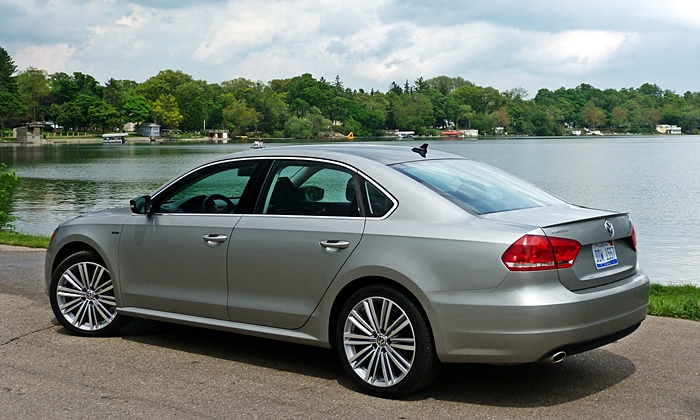 The Passat appears most elegant from the rear quarter. 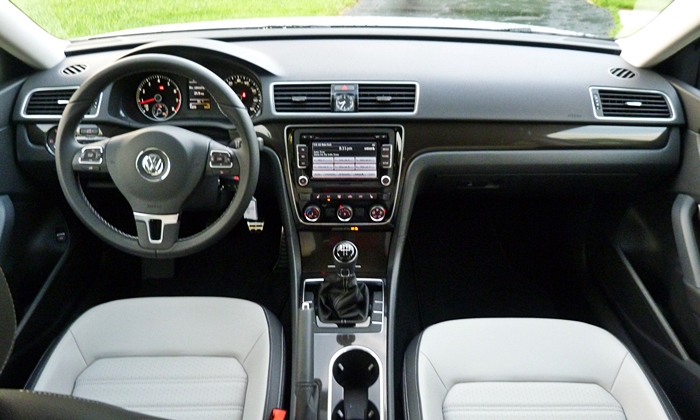 Though as powerful as the 170-horse 2.5-liter five-cylinder engine it replaced, and stronger through the midrange, the Passat's new 1.8-liter turbocharged four-cylinder engine earns significantly better EPA fuel economy ratings: 24 mpg city and 35 mpg highway vs. 22 and 32, respectively. Fitted with the six-speed automatic transmission, the difference widens: 24/36 vs. 22/31.

In my real-world driving, I observed similar numbers in both cars, and the Passat managed the highest observed one-time average on my standard route to my son's school: 39.9 mpg. The Mazda's best on this route was 38. More typically I observed averages in the low 30s when driving both cars casually in the suburbs. Push them, and averages can fall into the mid-20s, even the low-20s. On the highway, the Passat's trip computer reported an average of 35, the Mazda6's an average of 36. Too close to call. What is clear is that both sedans deliver much better fuel economy than could be expected when the current Passat was introduced three years ago.

This said, those seeking to maximize fuel economy, and who drive enough miles to offset a higher initial cost, have an even better option in the Passat's available diesel engine. The TDI engine has been further improved for 2015. It now peaks at 150 horsepower rather than 140. And it now rates 30/44 mpg with a six-speed manual transmission and 30/42 with a six-speed dual-clutch automated manual transmission; plus owners often beat the EPA ratings.

Shift paddles and metal pedals can only do so much. The Volkswagen Passat Sport looks and feels little sportier inside than a Berlin taxi cab. The plain, straight-lined styling that maximizes room both real and perceived also maximizes boredom. Much leatherette these days nearly passes for leather. The dual-toned rubbery stuff that covers the Passat Sport's seats is clearly petroleum-based.

The Mazda6's interior, though neither luxurious nor flashy, looks and feels considerably sportier.

The Passat Sport's exterior only excites compared to the sedan's interior. In a bid to sport it up, Volkwagen has added 19-inch wheels and (on silver and white cars) painted the roof and mirror caps black. Oddly, the large wheels are a multi-spoke design, and so appear more upscale and sophisticated than sporty. Neither these wheels nor the black roof can conceal the fact that the Passat's conservatively if cleanly styled body isn't nearly as sexy as the curvier Mazda's. 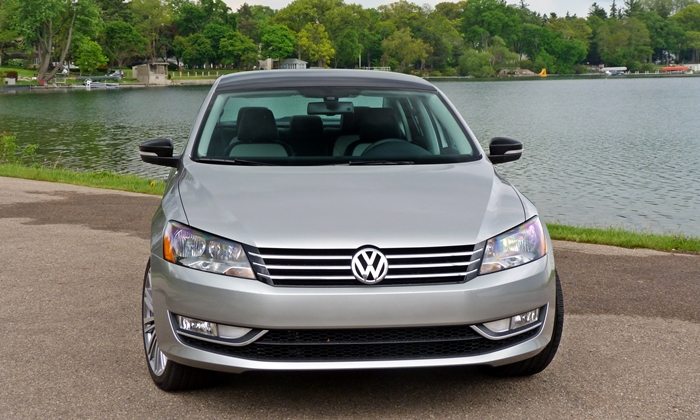 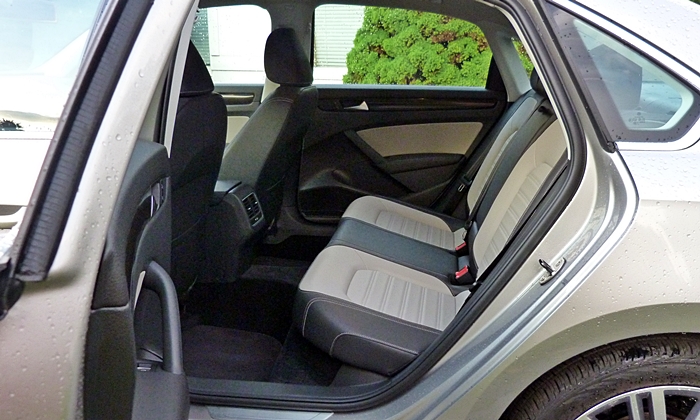 The current Passat, designed specifically for North America, is less expensive the the international model it replaced (and which is still sold in updated form elsewhere). But the Sport bits (19-inch rather than 17-inch wheels, black roof, fog lights, spoiler, door sill trim plates, metal pedals) bump the price by $1,815 compared to the Passat SE. With the manual transmission and floor mats, the sticker reads $27,690, $3,000 more than a Mazda6 i Touring. (Add another $1,200 for the automatic, which unlike in other four-cylinder Passats comes with shift paddles.) About half of this difference can be attributed to the Passat's additional standard features, which include an OnStar-like telematics system, satellite radio, heated seats, and the above list of Sport bits aside from the wheels. (The Mazda6 in Touring and Grand Touring forms is also shod with 19s.)

The Passat Sport's lower profile tires ride more stiffly than the standard-issue Passat's. The Volkswagen's suspension tuning also feels less supple than the Mazda's. It's still far from punishing, though.

Though neither car is loud inside, you'll experience significantly more road noise in both the Volkswagen and the Mazda than in a Chevrolet Malibu or Ford Fusion.

The Passat's new 170-horsepower 1.8-liter engine suffers from little turbo lag, and it pulls well from low rpm. But the Mazda's larger, non-turbocharged, 184-horsepower engine sounds and feels much more thrilling when revved.

The Volkswagen's manual transmission does little to enhance the driving experience. The shifter and clutch are passable, but the Mazda's lever has a more satisfying, more direct and precise feel. Beyond this, the VW box's ratios are tall and widely spaced. Good for fuel economy, not so good for performance.

Technically, the Passat Sport handles well, with modest lean and decent grip in turns. The linear, precise steering feels lifeless in casual driving, but wakes up enough to provide some confidence-inspiring feedback when the car is pushed. In general, though, the Mazda has livelier responses and tends to be more involving.

The Passat would feel at least a little more sporty with a smaller-diamter steering wheel like the one fitted to the new GTI.

Those hoping that Volkswagen has avoided the midsize curse of dull driving dynamics will be largely disappointed. Even with larger wheels and sporty trim bits the car remains essentially a German-engineered Camry. While the Passat is more satisfying to drive than the Toyota, this isn't saying much. The Mazda6 remains the sportiest affordable midsize sedan. Even it can't deliver the agile feel and driver involvement of the modestly lighter and more compact Mazda3. The midsize curse continues.

On the other hand, some people are seeking a Camry with the Bauhaus character, solid construction, and tighter suspension tuning of a traditional German car, and the Volkswagen Passat fulfills this mission even better than before thanks to the new 1.8T engine. With the Passat 1.8T, you can have a very roomy, comfortable interior in conjunction with good performance, solid handling, and very good fuel economy. The Passat might not be thrilling to look at or drive, but it's certainly practical. 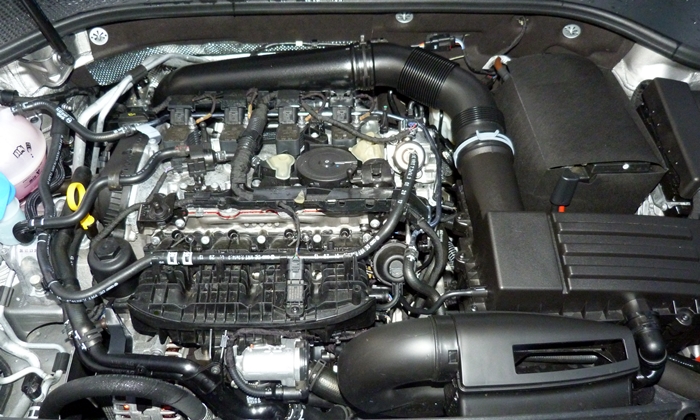 New 1.8T engine is more efficient than the 2.5-liter five-cylinder it replaced. 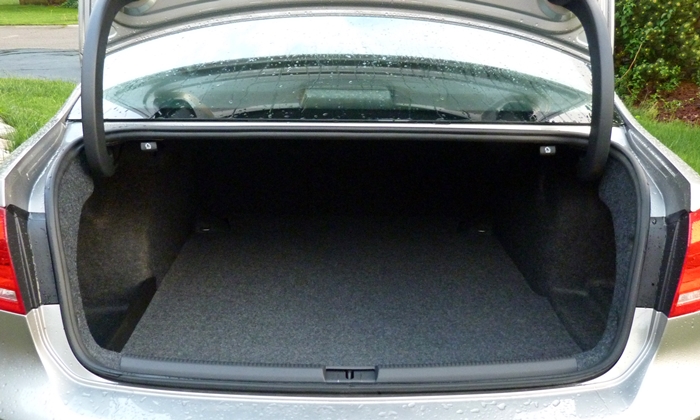 Michael,
I was curious to know your comments about this drivetrain. Sounds like the1.8T 5MT may be better suited to the lighter new Golf, which I'll be looking at when the wagon is released. I was hoping the broad torque band of this engine would compensate for the wide gear ratios, but maybe not so much? The shifter action on my 2004 Passat is crude, so the new 5MT should be an improvement, but it's disappointing that VW couldn't give us a decent 6MT.

The 1.8T is nearly as well-suited to the Passat as the Golf. The Passat is fairly light given its size. While a 2.0T might fit the Sport better, a properly ratioed six-speed would get the 1.8T most if not all of the way there. 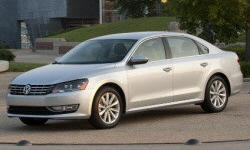 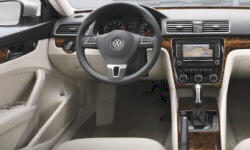