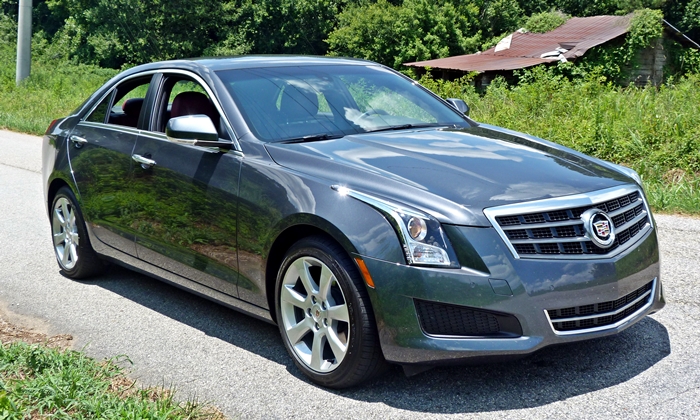 Growing up in the 1980s, I badly wanted to support the struggling domestic auto industry. But its products were rarely if ever the best. Excuses and allowances had to be made. With Cadillac's first attempt to compete with the (then young but already dominant) BMW 3-Series, the infamous Cimmaron, even these couldn't bridge the gap. It has taken three decades, but Cadillac has once again designed a car to compete head-to-head with the 3-Series, the 2013 ATS.

How does it compare with the segment's other rear-wheel-drive, shick-shiftable sedans, the BMW 3-Series and Infiniti G37?

The ATS looks better than it does in this photo--I should have taken a few steps back. more ATS photos 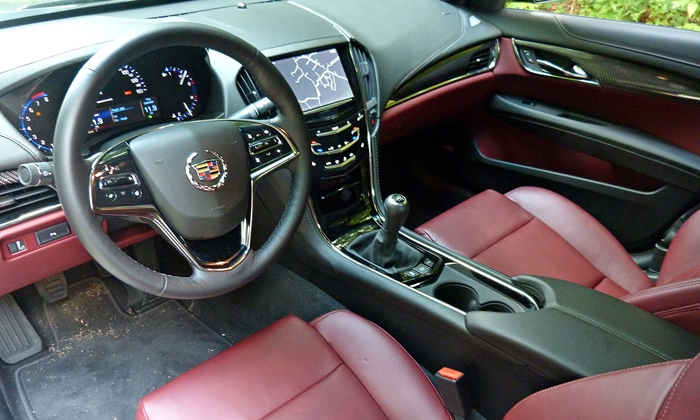 With the red interior, the trim is real carbon fiber. Black, tan, and gray are other choices.

In developing the ATS, Cadillac focused heavily on the BMW's largest strength, handling. To this end, they made the car compact and light, and prioritized handling over other criteria when designing the suspension. It shows. Especially now that BMW has shifted its attention to other priorities, the ATS is the best-handling car in the segment. Hustled through a series of curves, it feels agile, balanced, and composed, with precise steering via either wheel or throttle. Damping is tighter, and body motions are consequently much better controlled, than in the latest 3-Series. The top trim level ("Premium") adds lightning-quick adaptive dampers, but the base suspension is so well tuned that they don't make a substantial difference. I wouldn't get the top package just to get them.

Not that all is perfect with the ATS's handling. A relatively small steering wheel enhances perceived agility, but communication through the wheel could be more nuanced and involving. The Infiniti G37, though its chassis isn't as talented and behaves less progressively near its limits, has a firmer, more hard-edged, more visceral character. It can be the most fun of the three in semi-casual, around town driving.

The design and materials of the ATS's interior vie for best in segment. No direct competitor has fully upholstered the upper instrument panel and upper doors. This upholstery has a tighter, more precise fit than in the CTS. Seven different interior trim and color combinations are offered, and all are attractive. I need more time in the car to evaluate the usability of the CUE infotainment interface, but it's certainly pretty.

Update: time with CUE in some other cars found it to be difficult to navigate and too often unresponsive. 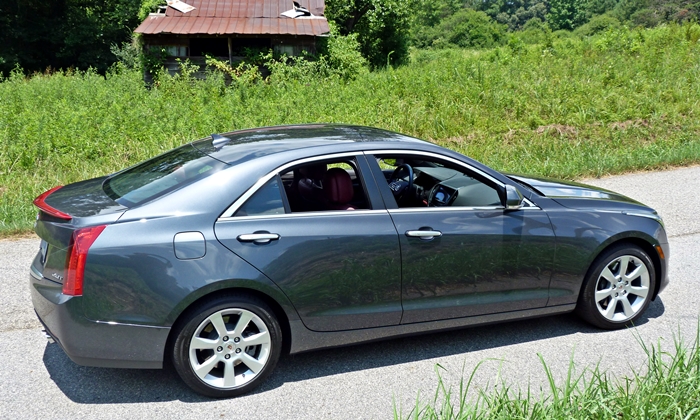 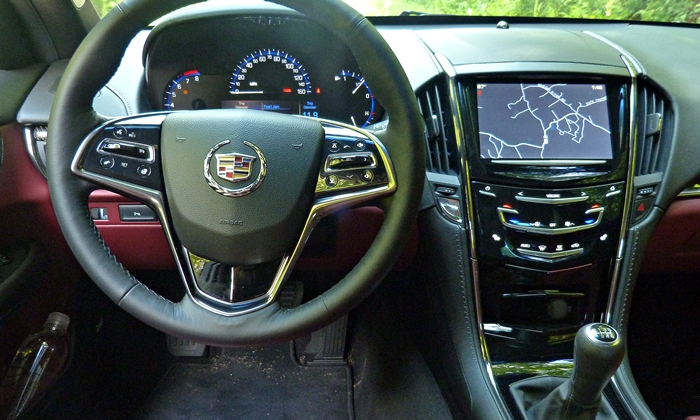 The CUE infotainment display is pretty, the instrument cluster not so much.

Very similar to that in a Mercedes-Benz C-Class, the ATS's driving position could hardly be better. Its instrument panel appears lower and less massive than that in a BMW 3-Series, its A-pillars are dainty by current standards, and, in some refreshingly original thinking, the armrests are at different heights to support the left arm while steering and the right arm while shifting. The view rearward isn't as good, thanks to thick C-pillars and a high trunk. The G37's driving position splits the difference between the Cadillac and the BMW.

The ATS scores well in many areas, but so do its key competitors. This fourth "reason to buy" is highly conditional on personal tastes, and I won't attempt a fifth. For the ATS, Cadillac has toned down the marque's "art and science" design language, so its exterior is more generic and less dramatic than the CTS's, and than I'd personally prefer. But it's still more dramatic than competing cars, while being thoroughly tasteful. With repeated viewings I'm liking its athletic proportions and clean lines more.

Both the BMW and the Infiniti have also been toned down compard to their predecessors. Both remain attractive cars, but are less edgy and less distinctive than those they replaced.

The latest 3-Series has a roomy, comfortable back seat. Cadillac didn't see this coming, and sized the ATS to compete with the previous-generation BMW. Consequently, the Cadillac's rear seat is considerably tighter than the BMW's or the Infiniti G37's, a little tighter than an A4's, about even with that in a C-Class, and roomier than that in a Lexus IS. If you want adults to be comfortable in back, the ATS isn't your car, but neither are most of the cars it competes with.

The latest 3-Series also has a far larger trunk than the ATS's, 17 vs. 10 cubic feet. The G37 exactly splits the difference between them. When optimizing the ATS's rear suspension for handling, space efficiency was allowed to slide. (While the ATS's trunk compares worse than its back seat does, I have put the back seat first on this list of "why nots" because more people will probably care about it.) 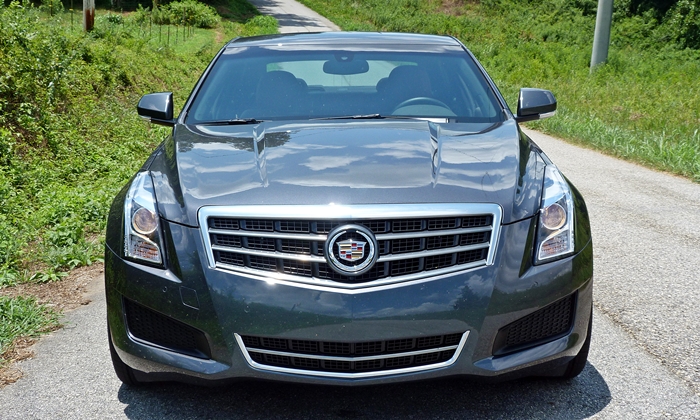 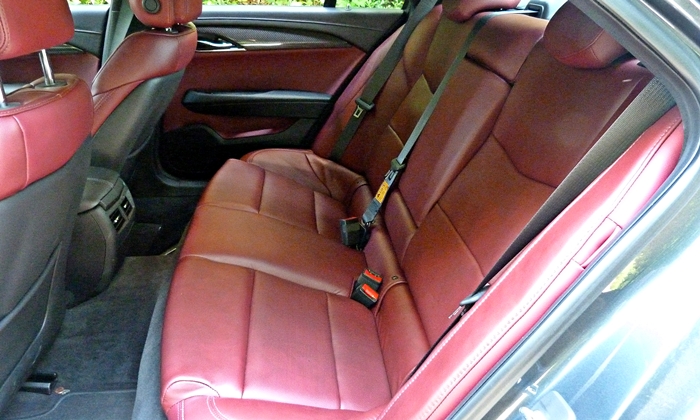 As mentioned in an update earlier, the CUE infotainment system looks great, but its display can be difficult to navigate and both the touchscreen and the touch-sensitive controls below it can be either slow to respond, or not respond at all.

The ATS has comprehensive instruments, but the main cluster's layout, with three analog gauges around a rectangular LCD, appears odd.

The front seats aren't bad, but they aren't notably good in any way, either. They could be both more comfortable and more supportive. To me, the center of the seat back felt convex rather than concave. The top two trim levels include "sport seats" with power-adjustable side bolsters and manually-adjustable thigh support, but even these provide only middling lateral support. The seats in both the BMW and the Infiniti are both more comfortable and more supportive when cornering. (For the driver, at least. In the Infiniti only the driver can get adjustable side bolsters.)

On paper, the ATS's engines meet or exceed competitors. Even the base 2.5-liter four-cylinder engine peaks at over 200 horsepower, while the 2.0-liter turbo kicks out 272 and the 3.6-liter V6 321. I found the base engine more satisfactory than most reviewers have. But the other two don't feel as strong as their power ratings suggest they ought to, and could also sound and feel more sophisticated and thrilling. They're all fairly good engines, but none of them is a great engine.

Fuel economy falls short of the BMW. The 2.0T engine is EPA-rated 19 city, 30 highway with a manual transmission, 21/31 with an automatic. Step up to the V6, and the numbers fall to 18/28. Deduct a couple of highway mpg with AWD.

The BMW's ratings are much higher. The 328i's 2.0T engine is rated 22/34 with a manual transmission, 23/33 with a six-speed automatic. The 335i's six-cylinder engine when paired with an eight-speed automatic transmission somehow manages the same EPA rating as the 328i's four-cylinder. In the real world it doesn't fare as well, though.

The V6 in the Infiniti in conjunction with a seven-speed automatic transmission is about even with that in the Cadillac, 19/27. Pair it with a manual transmission and the numbers fall to 18/25, worst of the bunch.

Pricing for the Cadillac ATS starts at $33,990, but tops $55,000 with all of the boxes ticked. The sweet spot could be fairly low in the range, with the $39,110 2.0T MT6 "Luxury." A BMW 3-Series costs only a little more, a C-Class costs about the same. The Infiniti G37 costs less, especially if you cmpare cars with V6s, though this difference largely disappears if you adjust for the Cadillac's additional features. Even a good new car like the ATS should be priced more aggressively until it has established a reputation.

Depending on your personal priorities, the Cadillac is either the car to get or not viable. If you need a roomy rear seat or trunk, or feel only a German car should have a German car price, then the ATS isn't the car for you. But I personally prioritize handling, so the Cadillac would be my choice among the many excellent cars in this segment. It bests the BMW 3-Series at what the BMW does (or at least used to do) best. 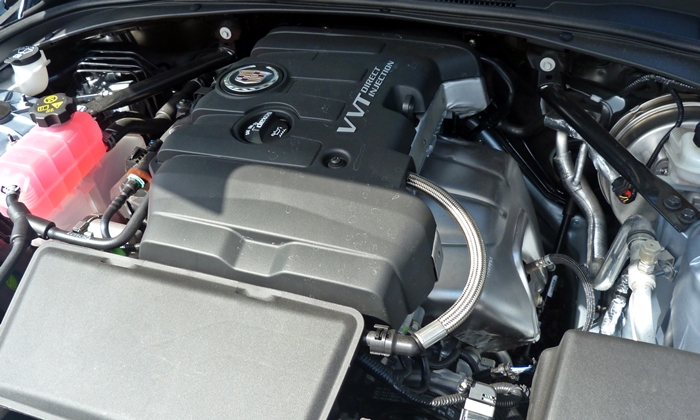 With the rearward placement and typical cover, nothing to see here. 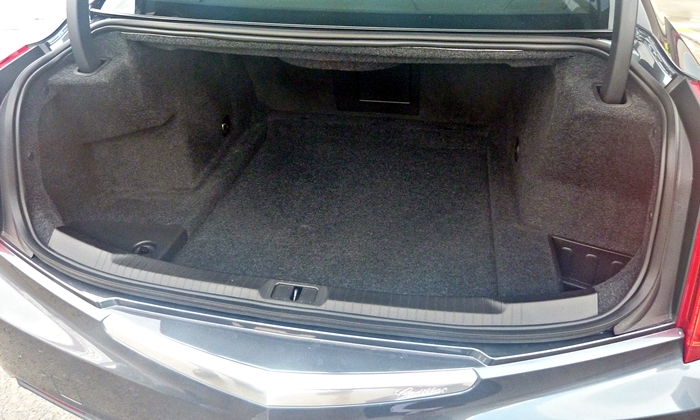 Cadillac provided airfare, lodging, meals, the cars, and track access at an event for media. BMW and Infiniti each provided insured cars with a tank of gas. 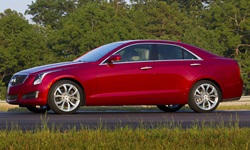 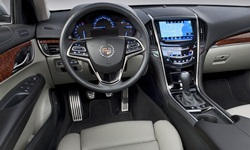