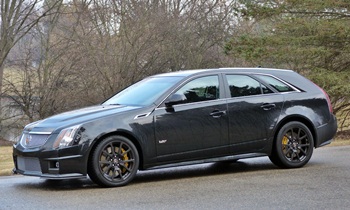 Especially in black or Thunder Gray, this one's bad to the bone. more CTS photos 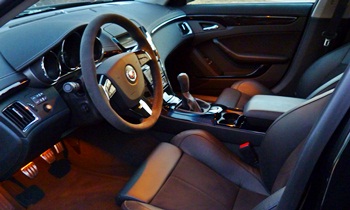 Stylish five years ago, behind the times today.

Engines don't get more American than a small block V8 fitted with a supercharger. Kicking out 556 horsepower at 6,100 RPM and 551 foot-pounds of torque at 3,800 RPM, the 6.2-liter engine is more than a match for the CTS-V wagon’s considerable 4,398 pounds. It's got thrust (though the car's mass and refinement do make it feel more like a mere 450 horsepower than 556). It's got character (but not so much as to be obnoxious). Uncorking this engine elicits a primal joy. The direct connection provided by the firm-yet-precise manual shifter enhances the experience. More than any other I've driven, this black CTS-V wagon made me want to do bad things.

The CTS-V wagon could hardly look more American. Europe and Japan generally don't go for shapes this bold, even brash. They also don't derive inspiration from the original stealth fighter plane. Beyond this, the car looks like it drives. Your senses confirm and reinforce each other. Always good, but not commonly achieved, at least not in a good way. (Plenty of cars are boring both to look at and to drive.) Not everyone is a fan of the wagon, but it works for me. The upcoming smaller ATS does raise concerns. Cadillac might be losing its nerve to produce bold, risky designs in favor of more broadly appealing ones. 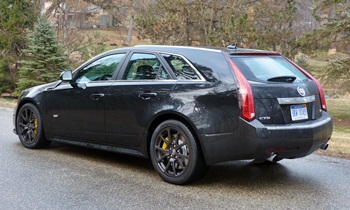 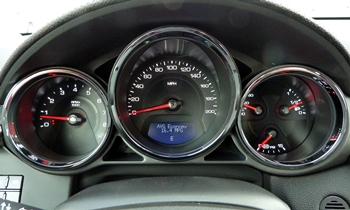 The CTS-V is too tall and heavy to drive like a sports car, so strike that analogy from your mind. (If you want a large sedan that feels somewhat like a sports car, check out the lower-riding Porsche Panamera.) The CTS-V is nevertheless much easier to drive quickly along a curvy road than such a big, powerful car has any right to. The chassis and steering provide nuanced feedback and react intuitively to driver inputs. Even with so much torque to channel, the rear suspension oversteers progressively and predictably as throttle is dialed in. All in all, this is one of those cars that makes you feel like a better driver.

Okay, the CTS-V doesn't quite ride like a...Cadillac. But given the V's extreme performance it rides surprisingly well: firmly, but rarely harshly, and definitely viable as a daily driver (if one can afford a lot of gas). Quick-reacting adaptive shocks deserve some of the credit, perhaps even much of it.

Add the Recaro bucket seats (more on these later), and the CTS-V lists for $68,790 in any of its three bodystyles. How, then, can pricing possibly be a strength? Well, a smaller, less powerful BMW M3 costs about the same, a similarly sized, similarly powerful BMW M5 costs about $100,000, and a Porsche Panamera turbo easily tops $140,000.

Even more than with the typical car, the harder you push the CTS-V the more it drinks. I often observed fuel economy in the single digits. In fairly casual suburban driving the trip computer reported between 12 and 16 miles-per-gallon. Only with a very light foot can the CTS-V be coaxed over 20 MPG. And it's about as easy to drive this car with a very light foot as it is to find out how many licks it takes to get to the center of a Tootsie Pop. The EPA ratings are 14 city, 19 highway with the manual transmission and 12/18 with the automatic.

The CTS's navigation system was barely state of the art (and already a pain to use) when the car was introduced five years ago, and is badly in need of an update today. The CUE system fitted to the new ATS and XTS is far more advanced. 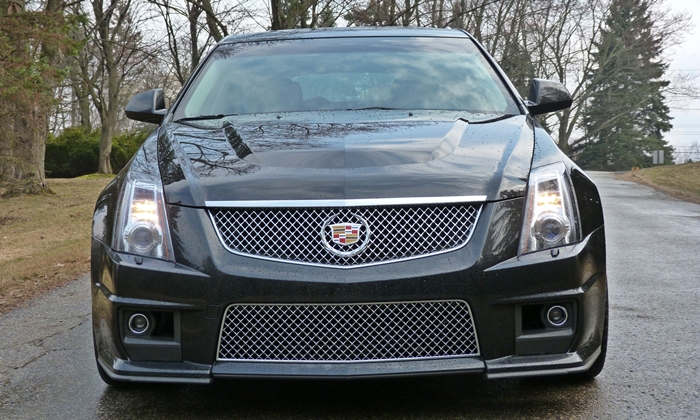 The V can be identified by its large mesh upper and lower grilles. 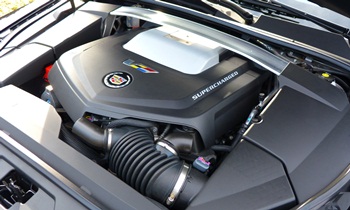 Supercharger on top, but the engine itself is covered up.

Like its nav system, the CTS's interior materials are now a few years behind a rapidly advancing curve. The alignment between the instrument panel and the door panels and between the sections of the split-folding rear seat could also be better.

The optional Recaro seats are a must despite their $3,400 price, as they provide power-adjustable side bolsters that provide far better lateral support than the standard seats. But the Recaro seats aren't very comfortable, with overly firm bulges here and there. Though the lumbar support can be power-adjusted vertically as well as in-and-out, I couldn't find any position where it was comfortable and ended up adjusting it for minimum intrusiveness.

Cadillac offers the CTS-V in only eight shades, and only two of these (a red and a blue) fully deserve to be called "colors." European competitors tend to be offered in a wider array of more intriguing hues. I'm still waiting for Cadillac to offer this car in a metallic gray-blue well-suited to its shape. Until then, my favorite remains the $995 "Thunder Gray." If I had a sixth "con," it would be limited interior storage. My superzoom digital camera wouldn't fit into either the glove compartment or the center console, so it spent the week ricocheting about the passenger footwell.

Its nav system and interior materials might be dated, and few cars can more quickly dispatch a gallon of gas, but the Cadillac CTS-V's performance, handling, and styling (together with a livable ride) make for a thoroughly satisfying driver's car. The hard part: resisting the resulting urge to drive in a highly illegal manner. 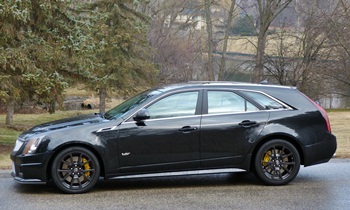 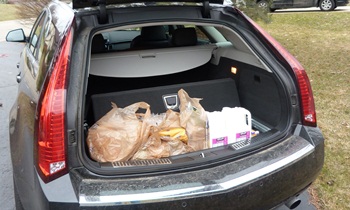 No minivan substitute, but it'll do for even large grocery runs. Note handy partition.

One-week loan. Cadillac provided the car with insurance and a tank of gas (which didn't last long). 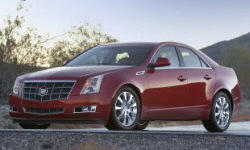 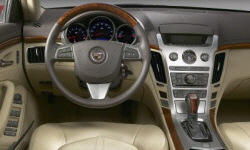