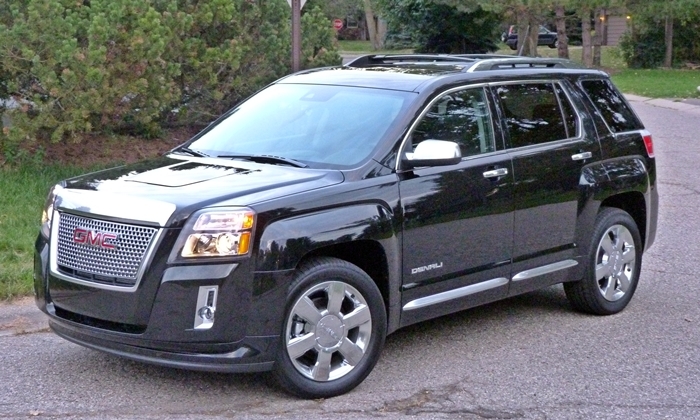 Well after GMC introduced the Terrain dealers still couldn't hold onto them. Longer and more ruggedly styled than other compact crossovers, the Terrain filled a large hole in the market. But all was not perfect. A peaky V6 proved a poor fit for a two-ton vehicle. For the Terrain's fourth model year, GMC has substituted the larger, torquier V6 the Terrain should have had from the start and added a new Denali trim level. Will there be a waiting list, and will you want to get on it? 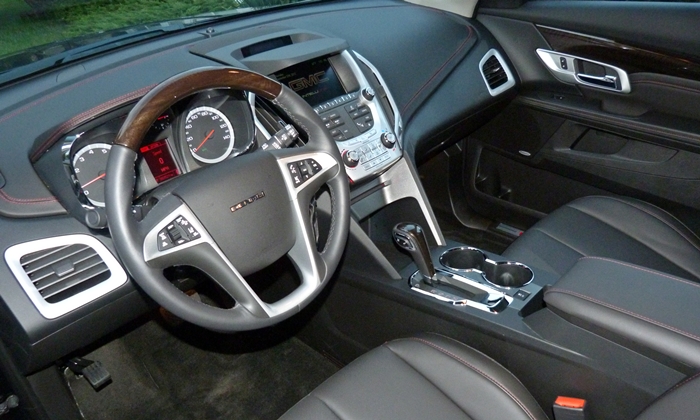 Just about every brand now offers a crossover with the sleek styling of a car, only taller. A brawny, squared-off exterior that recalls the defunct Hummer line distinguishes the GMC Terrain from the pack. It's not pretty, but it's not intended to be pretty. If you want pretty, or simply to blend in, Chevrolet offers the related Equinox. The Denali adds a large, chromed, faux billet grille, body-color lower body trim, and chrome-clad wheels to take the Terrain's already commanding (for its size) road presence up another notch. (I rate the Terrain even with the Ford Escape in this area because they hit very different targets about equally well.)

The GMC Terrain's 112.5" wheelbase (six to nine inches longer than competitors') further distinguishes it within the segment. This long wheelbase lend it the smoother, steadier ride of a larger crossover. The Denali's standard (with the V6) 235/55R19 tires clomp a bit over bumps, but what they take away a granitic body structure and Denali-exclusive dual-flow dampers give back, and then some. 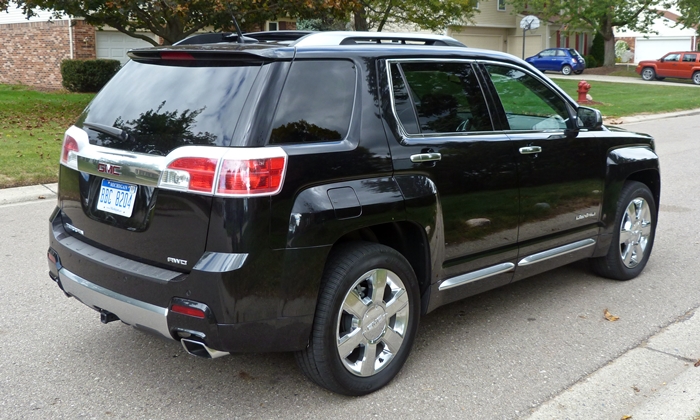 No more likely to be mistaken for an Equinox going than coming. 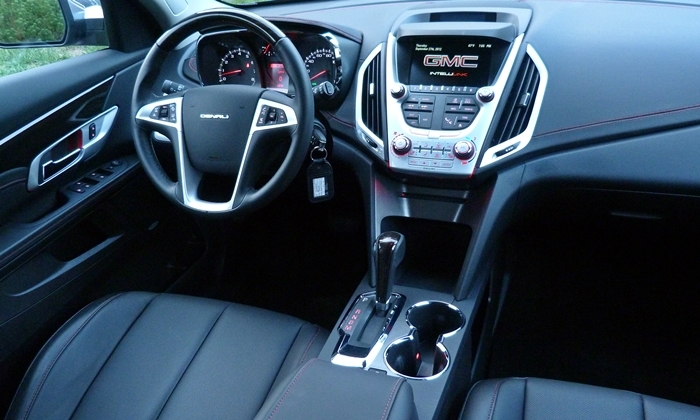 The GMC Terrain Denali also rides very quietly, perhaps even too quietly. It's scary easy to lose track of how fast you're driving. The Ford Escape is quieter than most compact crossovers, but not this quiet.

The GMC Terrain's long wheelbase also pays off with noticeably more rear seat leg room than in competitors. In fact, there's a little more combined legroom in the first two rows than in the far larger Yukon XL, and a few more inches than in the larger Acadia. Sound like enough space to fit a third row? Perhaps, but GM opted not to offer one. The Terrain is thoroughly compact in width. The larger GMCs remain much better options for transporting three adults in the back seat. They're also better for carrying cargo. The Terrain's cargo floor is long, but its also high and narrow, and the second-row seats don't fold flat.

Even in the Denali, the GMC Terrain's base engine remains a 182-horsepower 2.4-liter four-cylinder. Performance with this engine in typical suburban driving feels considerably better than the specs suggest it ought to. But anyone who must contend with steep grades or large loads, or who sometimes just wants to scoot, will want the optional V6. The 3.0-liter V6 in the 2010-2012 Terrain produced a respectable 264 horsepower, but at a lofty 6,950 rpm. In comparison, the 301-horsepower 3.6-liter V6 isn't only quicker, but even in casual driving sounds and feels much less strained. The slightest hill no longer induces the six-speed automatic to drop a cog or three. Due more credit than the bump in peak power: 50 additional pound-feet of midrange torque (272 @ 4,800 vs. 222 @ 5,100).

The GMC Terrain gains some desirable features for 2013, including a well-featured, easy-to-use "Intellilink" infotainment system. Pairing a phone doesn't get quicker or more painless, and Pandora is seamlessly and thoroughly integrated. New safety features (all standard on the Denali) include forward collision alert (useful), blind sport warning (useful), rear cross-traffic detection (useful), and lane departure warning (not; most people, annoyed by frequent unneeded beeps, will likely turn it off). The problem is, the Terrain Denali lacks many features buyers might expect at its price (more on this later).

When introduced, the Terrain's interior was among the nicest in the segment. The Denali adds upgraded black leather with red stitching, a soft-touch stitched pad on top of the instrument panel, wood trim on the steering wheel, and illuminated door sill trim plates. These additions look and feel upscale, but the rest of the interior hasn’t kept up. The knobs, buttons, and switches (too many beyond easy reach) and narrow, hard door armrests aren’t worthy of the Denali’s aspirations, as reflected in its price. 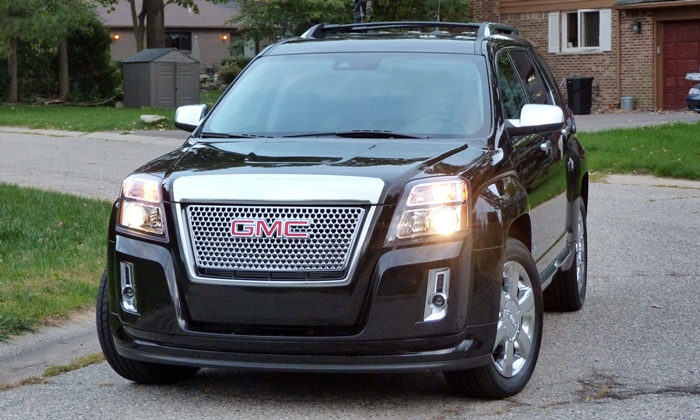 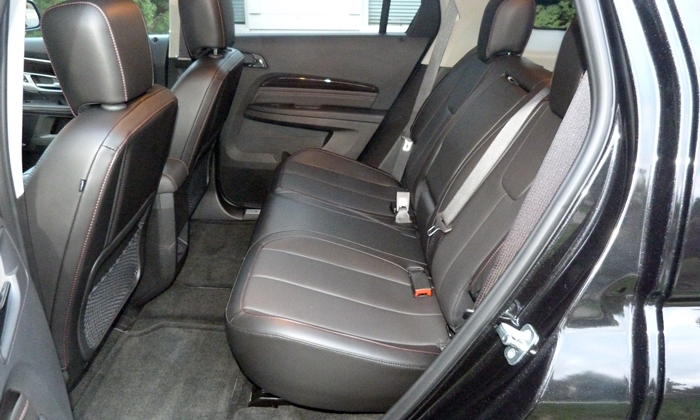 Abundant rear legroom, but no vents or seat warmers.

About that price. The Denali trim level adds less content here than in the Acadia and Yukon, but it also only adds about $1,300. In itself, this seems reasonable. But the Terrain was already the priciest major player in the segment. The tested vehicle, with the V6 ($1,750), nav ($795, but slow and with a limited feature set), cargo package ($235), trailering package ($350), and black metallic paint ($195), listed for $40,425. Granted, the new, larger (but not this large) Acura RDX is $685 more before adjusting for feature differences, and about $1,115 more afterwards. But a similarly-equipped Ford Escape Titanium is about $2,370 less before the adjustment and about $3,800 less afterwards.

On a positive note, the larger V6 earns the same EPA fuel economy ratings as the old one. On a less positive note, it also earns the same fuel economy ratings as the much larger, 4,850-pound Acadia: 16 city, 23 highway. In suburban driving the trip computer reported high teens to low twenties, a few mpg below lighter, more compact competitors. The four-cylinder gets 22/32 with FWD, 20/29 with AWD, but many owners have failed to approach these numbers in the real world.

A relatively large compact crossover with a relatively cushy suspension, the Terrain isn't the best choice for driving enthusiasts. Though body motions are very well controlled and the Terrain's chassis never deals out nasty surprises, its feedback-free steering has some slop on-center. It simply drives like an even larger, heavier vehicle. The seat of my pants noted similarities to an Acadia or even a Yukon. For some people, perhaps even most people, this will be a pro, not a con. But those seeking a hot hatchback with a lift will be much more satisfied driving the Ford Escape.

The GMC Terrain possesses clear strengths, most notably distinctive styling, generous rear legroom, and a smooth, quiet ride. The larger V6 addresses a previous weakness. But the Denali trim level, while further enhancing the Terrain's appearance, lacks too many features expected with a $40,000 sticker. Some interior materials also haven't kept up. These aren't huge negatives. But any big demand will probably be for less-expensive trim levels where these aren't shortcomings. 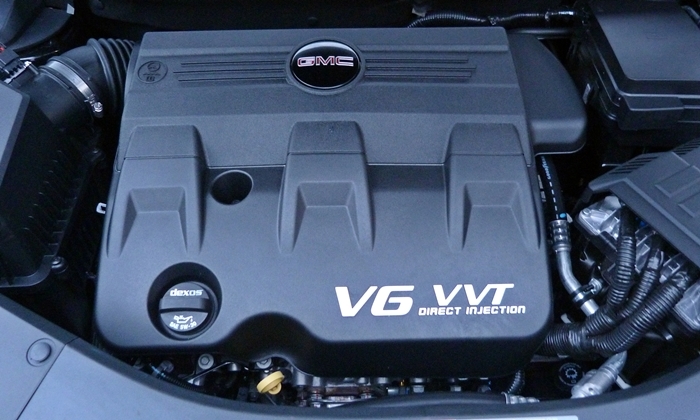 The engine that should have been offered from the start. 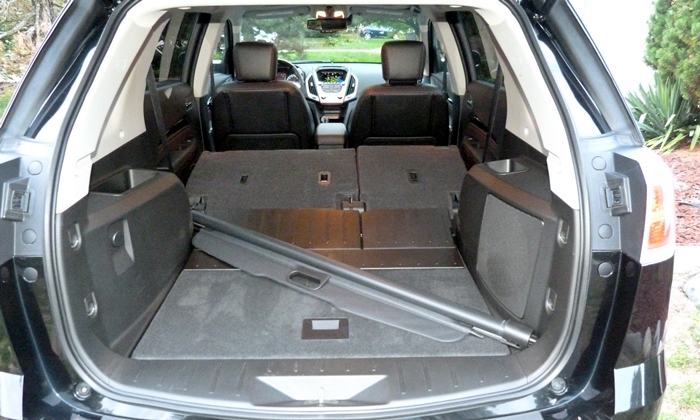 Long, but narrow, high, and not nearly flat.

One-week loan. GMC provided an insured vehicle with a tank of gas.

2013 GMC Terrain pros and cons, according to Michael Karesh: the best reasons for buying (or not buying) the 2013 GMC Terrain. Join TrueDelta to post your own impressions.

Our 2015 Terrain SLT 2.4l is one sweet, spacious, and quiet ride. The 4-cylinder easily sees 30+ mpg at the highway speed limit and is quiet and vibration free. Even my Father didn't know it was a 4-cylinder in normal driving the active noise cancelation works well. The long wheelbase shows its length in the city where parking can be tight, but takes high speed highway turns with poise. The laminated glass helps with wind noise. The back up camera has guidance lines that turn with your steering wheel that is so accurate that I was able to back into a parking place perfectly between the lines, impressive! Never a lack of leg room in the front or rear seats.

Even one step down from the Denali version we found similarly the lack of heated steering wheel, rear seat vents and HID headlights. But I guess that us what Cadillac SRX is for with all its chrome we didn't want. 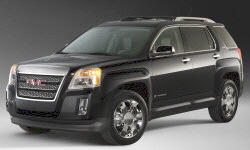 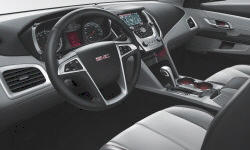