2013 Land-Rover Range Rover Evoque Pros and Cons: Why (Not) This Car? 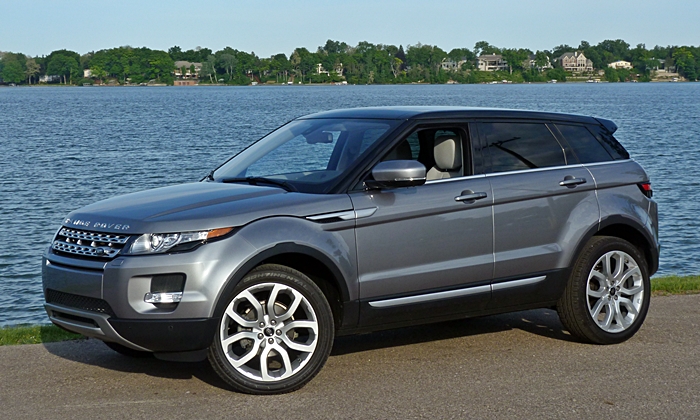 Hear "Range Rover" and what do you picture? Perhaps a large, rugged SUV in the wilds of Africa. Oh, wait, that's the Land Rover. A Range Rover? That's also a large SUV, but much more stylish, luxuriously furnished, and most prevalent in the wilds of Beverly Hills and Greenwich.

But does a Range Rover have to be large? What if you could get the same style and luxury in a much smaller, more efficient, less expensive package? Discerning the demand for such a package, and needing both growth and a higher corporate average fuel economy (CAFE), Land Rover introduced the Range Rover Evoque (henceforth just "Evoque") for the 2012 model year.

Ever since, Land Rover dealers have had trouble keeping them on the lot. Is there that much to like about the Evoque? Or are people just buying a badge? I put the Evoque up against a BMW X1 (reviewed here) to find out. 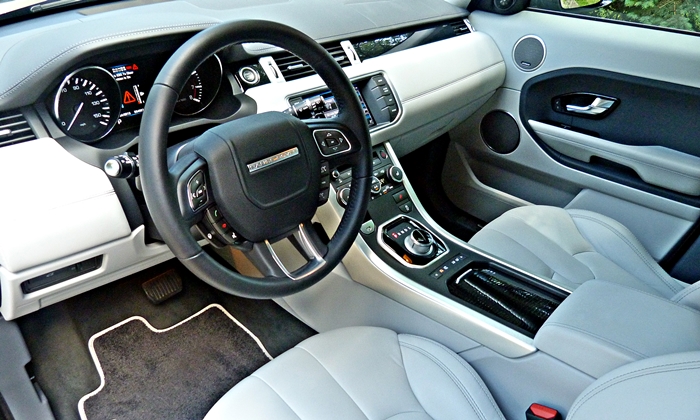 If you don't like how the Evoque looks, then you're far less likely to want one. But you probably like how it looks. The Evoque's exterior takes traditional Range Rover cues and fits them to a much more athletically proportioned package. The wheels are huge, the windows are small. Not good for other reasons (we'll get to them), but damn the Evoque is a sexy little beastie. Especially with the roof in black (a $650 option).

The BMW X1, though attractive in its own way, is hideous compared to the baby Range Rover.

The Evoque's interior is nearly as stylish as its exterior. The look isn't traditional Range Rover, yet it couldn't be anything else, with a warmth you simply won't find within a BMW. 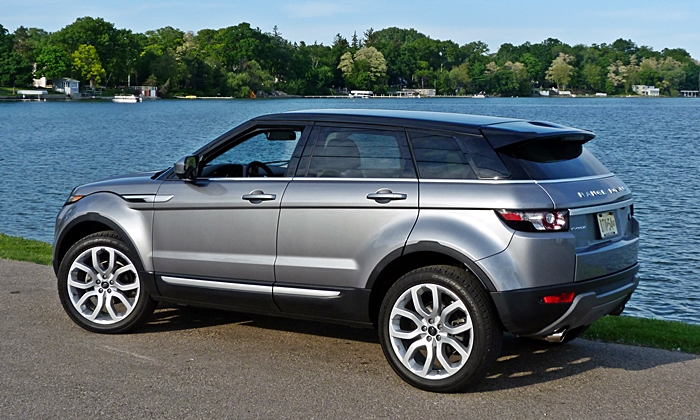 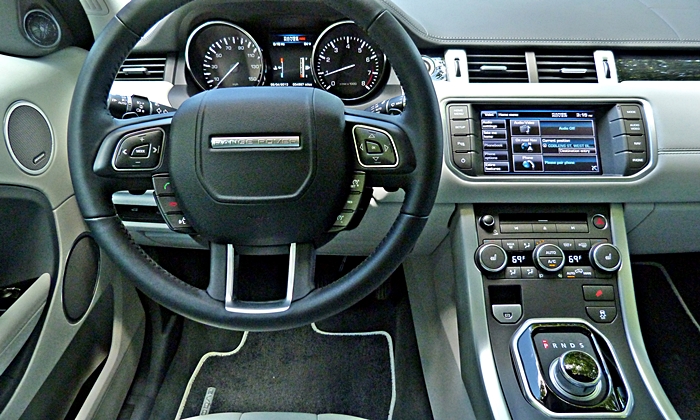 Count the number of beveled corners. The AC controls are easy. The others, not so much.

Not all of the plastics inside the Evoque have a premium feel, but opt for the $10,400 Prestige Premium Package and the instrument panel, door panels, and seats are all upholstered in high-quality hides. This package also adds real wood to the instrument panel, but just a strip stained so darkly that many people won't notice the graining. Though the atmosphere inside the Evoque isn't as lofty as that inside the senior Range Rovers, it looks and feels expensive and is worthy of the brand.

I personally prefer compact vehicles because they tend to be more agile. But not all compact vehicles feel agile. Well, the Evoque does. Credit quicker, lighter steering than you'll find in a BMW X1 and a taut suspension. Though 3.6 inches taller than the X1 (the BMW is as low as a crossover can be without simply being a car), the Evoque doesn't roll much more. Feedback arrives via the seat of the pants and the ears (as the tires squeal prematurely), not via the fingertips. The Range Rover's firm suspension can feel out of sync with the light steering, but handling remains safe and predictable given the progressively heavier understeer typical of a nose-heavy, front-wheel-drive platform. (Drive stupidly, and the BMW's handling will be trickier.) Push both vehicles, and the more balanced and polished BMW feels better and better while the Range Rover starts to lose its composure and plow for the curb. But in typical daily driving the Evoque feels livelier.

This is with regard to on-road handling. A Range Rover wouldn't be a Range Rover unless it could, well, rove the range. While it's hard to imagine taking $2,000 20-inch rims off-roading, the Evoque does have a decent amount of ground clearance and sophisticated chassis electronics with selectable modes for mud, sand, and so forth. I cannot attest to the off-road prowess of either vehicle, but given the foci of the respective manufacturers and the features present the Evoque should be considerably more capable than the X1.

Smaller vehicles tend to offer fewer features, and you can't get quite as much stuff on an Evoque as you can on larger Range Rovers. A few more adjustments and ventilation for the seats would be welcome. But things on the tested Evoque you cannot get on the X1 include a power liftgate, around-view cameras, blind spot detection, a heated windshield, and rear air vents. Oh, and all that leather. Plus an 825-watt, 17-speaker Meridian audio system. The Evoque's standard audio system is roughly equivalent to the X1's optional system. But get the fancy package and a speaker everywhere one can fit is part of it.

The Evoque might be cheaper than other Range Rovers, but it's far from cheap. The 2013 started at $41,995. The loaded example featured in this review lists for $56,795, a lot for a small vehicle powered by a four-cylinder engine. The cartoonishly large 20-inch wheels? If you can live with mere 19s you'll save $2,000. Deleting the black roof would shave another $650, but it makes the car.

For the sake of comparison with the BMW, though, we'll drop both. This done, an Evoque still lists for $7,905 more than a comparably equipped BMW X1. Adjust for the Range Rover's additional features, and the gap is still about $6,400.

Considerably more expensive than a BMW--this is really saying something. Disregard the plentiful leather and prestigious label, and a Ford Escape isn't so different than an Evoque. It even has the same engine. Configure the two as similarly as possible (meaning no Prestige Premium Package), and the Evoque is $14,645 more before adjusting for feature differences, and about $13,000 more afterwards.

Let's assume that, after the feature adjustment, the two vehicles really are equivalent. Is the Range Rover badge worth $13,000 more than the Ford blue oval? Quite a few people have been answering yes.

The standard Range Rover has large windows and a commanding driving position. These have been sacrificed for style with the Evoque. The windshield is more distant than in the X1, and the connection between driver and car is consequently less intimate. With the windows pinched between a downward sloping roofline and upward sloping belt line, rearward visibility is especially poor. If you're fond of open sightlines, the Evoque isn't for you.

The available blind spot monitor and surround camera system help compensate. But the latter presents each camera's views separately, not stitching them together to form a seamless top-down view the way most such systems do. While it's possible to view one image at a time, and even zoom in, this multi-image presentation is far less intuitive. 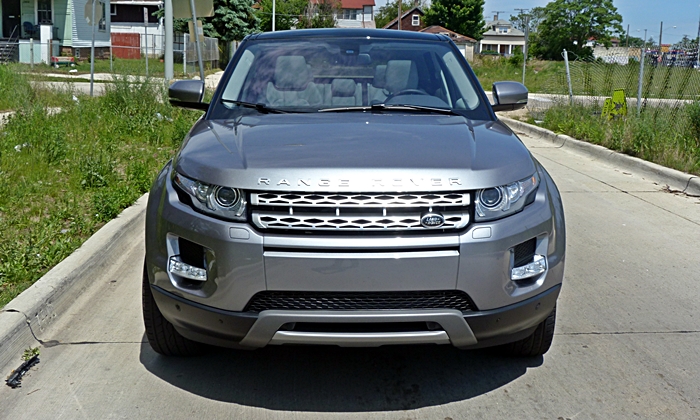 No brush guard, but clearly a Range Rover and tough enough for the mean streets of Detroit. 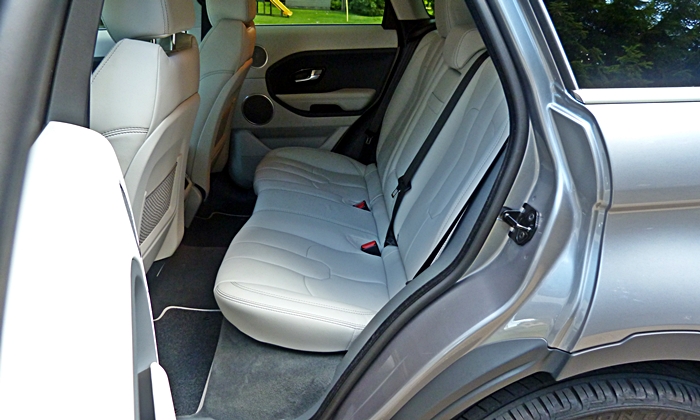 Not a lot of room in the back seat, but more comfortable than you probably expect.

Unless you've already spent a lot of time inside another recent Land Rover or Jaguar, the Evoque's controls will seem odd and confusing. On top of this, the touch screen interface responds more slowly than most. Something as basic as surfing the many channels of the satellite radio proved tedious. When did tuning knobs become so unfashionable?

With huge wheels and taut suspension tuning, it should come as no surprise that the Evoque's ride feels lumpy at low speeds, jittery on the highway, and firm all the time. If you want cushy, get a larger Range Rover. But not the X1. While the BMW feels more solid and substantial while clomping across chunky pavement, it rides about as firmly as the Evoque.

When I first drove an Evoque, I found its front seats cushier and more comfortable than those in the X1. But that was for a short test drive. With more seat time later, the seat felt overly firm beneath my bum and the left seat cushion bolster pressed uncomfortably into my thigh. We're all shaped differently, and we sit differently as well, so your impressions may vary. As with any car, try to get as much seat time as you can before buying--few things are harder than seat comfort to evaluate during a test drive.

If anything, the rear seat is a positive surprise, with more room than expected given the Evoque's compact dimensions and the priority given to styling. At 5-9, I can fit behind myself with few inches to spare both over my head and ahead of my knees. The cushion is somewhat low, but both it and the floor are shaped to make the most of limited space. The X1's rear seat is a tighter and less comfortable.

There's enough cargo space for typical around-town needs, or for two people on a trip. Four plus their luggage would be a tight fit--but not quite as tight as in the X1.

With a Ford-supplied 240-horsepower turbocharged 2.0-liter four-cylinder engine and Aisin six-speed automatic transmission, the Evoque is quick, but not OMG quick. Like the similarly powerful BMW, the Evoque weights about 3,700 pounds. Figure mid-sevens to 60 mph if you don't take extreme measures.

Quick enough for me. What I'd much rather have than more power is more instantaneous responses. As it is, the Evoque often seemed to take a moment or two to react to the throttle. The more you needed to scoot, the more it seemed to take. The BMW's powertrain also hesitated from time to time, but not as much as the Evoque's.

The Evoque's fuel economy is much better than that of other Range Rovers. The EPA rates it for 20 mpg city, 28 mpg highway. In casual suburban driving the trip computer reported averages around 22, topping out at 25 with a very light right foot. On a 70-mph highway it reported 30. The BMW is rated higher, 22/33, but its real-world advantage seemed small (with a very light foot in Eco Pro mode) to non-existent (otherwise).

The Range Rover Evoque's appeal is fairly simple: no other compact SUV approaches it in style or ambiance. Agile handling in typical driving is merely a bonus. Some people need more space inside a vehicle, but there's more of it than the Evoque's styling and size suggest.

As if this weren't enough--and it apparently isn't--dealers simply cannot get more of them. With the Evoque entering its third model year demand continues to outstrip supply, especially for the four-door. 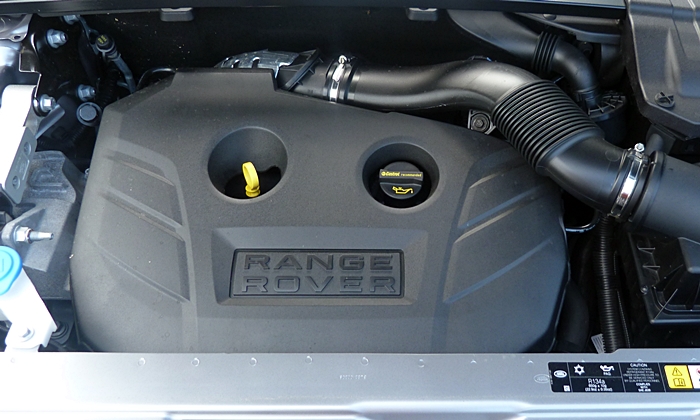 The cover says Range Rover, but the engine is 99 percent Ford. 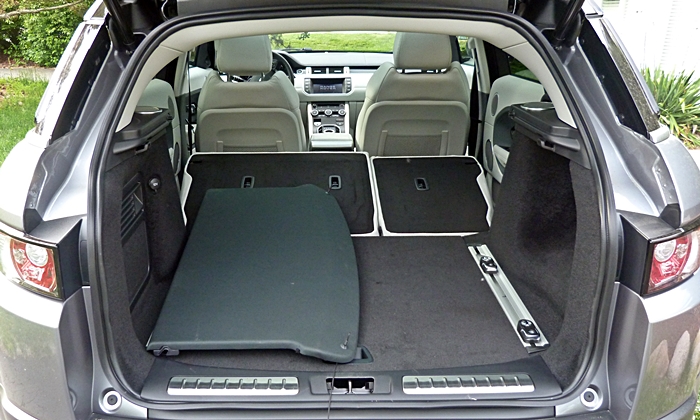 A larger SUV can hold more, but it won't look or feel as sporty.

Land Rover and BMW each provided insured cars for a week with a tank of fuel.

More About the Range Rover Evoque 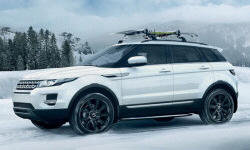 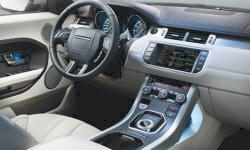