2008 Subaru Outback Pros and Cons at TrueDelta: I swallowed the AWD / reliability / safety marketing pill and paid for it dearly... by kjerram

I bought a 2008 Outback 2.5 PZEV 5-speed wagon with 95,000 miles in December 2013 for $12,500. Despite coming from a dealer and having a fairly complete maintenance history and new timing belt at the time of purchase, the vehicle needed a phenomenal amount of attention in the ~2 years I owned it. New wheel bearings on all corners every 40,000 miles (if lucky), CV shaft boots cracking because of proximity to exhaust, electrical issues with the airbag warning lights, headlight and radio failures related to tailgate wiring issues, routine exhaust leaks, engine whistling noises of undiagnosable origin, three consecutive failures of OEM Subaru clutch release bearings (finally fixed with aftermarket kit), and a seriously rust-prone body construction even with frequent washing and waxing. Not to mention fuel economy several MPG below the stated performance, especially after the several emissions-related ECU reflashes the dealer required!

This car cost me ~$5000 in repairs in 27 months, though I did a tremendous amount of research on the Subaru forums and used independent Subaru-experienced mechanics whenever possible. After the last two recalls (catalytic converter and airbag) that required interaction with the dealer, I decided give up on this thing and was lucky to get $6500 for it. Unfortunately, that means I lost $11,000 in two years. I admit I swallowed the AWD / reliability / safety marketing pill and it cost me a tremendous amount of money, aggravation, and peace of mind. Now looking at Subaru's latest fear-based advertising featuring a mom and her kid getting into an accident, I am even happier to be done with this company. Best wishes to anyone who can stomach a long-term relationship with one of these 2005-2009 generation Outbacks.

Man that sucks, but thanks for putting this out there.

Thanks for the warning, I'll scratch Subie off my shopping list.

In TrueDelta's reliability stats the 2005-2009 Outbacks have been much more troublesome than the 2010 and up.

I have a 2007 Outback that I bought in 2012. It had about 45k when I bought it and so far this is what I have had to have done. Window off the track; repaired for $200.00, shifter cable replaced; another $150.00, rear struts, one rear wheel bearing; $400.00.One front shaft and repair on y pipe in exhaust $260.00. I also just did the 105K timing belt with water pump job; $1150.00. So far the dreaded head gasket job has not been required. It is strangely difficult car to hate though. It gets poor mileage, but is enjoyable to drive. I just gave it to my daughter hoping that it can go a few years without the heads blowing, and if and when it does, I am going to Subaru for some relief. I now have 99k on the car. I gave another daughter my 2008 Malibu with about 120k, which had only needed brakes and tires and minor maintenance issues like a blown headlight. It is underpowered, but a great ride and so far bullet proof. No rust on any of the cars despite living in Cleveland, Ohio. I would buy another Chevy, but not a Subaru and I do love that car but it does nicle and dime you. Like I said, it is strange.

How many MILLIONS of people had the same airbag recall. I'm luck to have a GREAT dealer in Edmonton.... no problems. My 2005 now has over 200,000 km on it and things like CV-joints and timing belt I consider to be "standard" wear & tear and I did the work myself. I say like Kriva... it's not the greatest gas mileage but with my Nokian Hakkapeliitta 8 Studded tires, true AWD, electric heated windsheild and the lovely heated seats and toasty warm heat (too hot on Max) in our -20?C -35?C winters near Edmonton in Northern Canada... this is THE car to safely get around. I love it.

More About the Outback 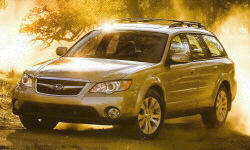 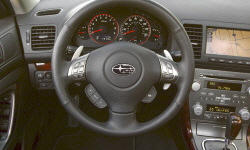