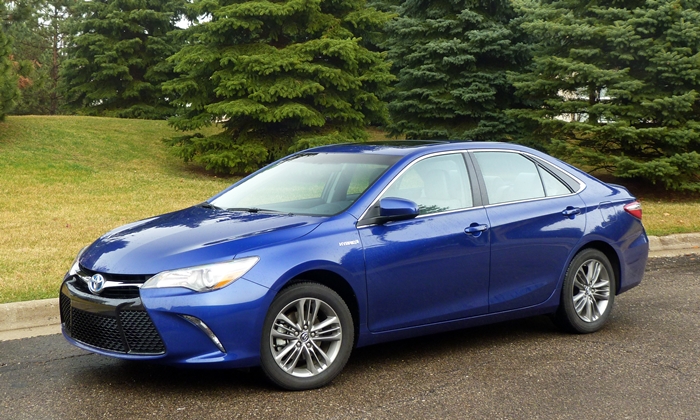 The problem with selling over 400,000 Camrys to North Americans each year? You have to keep doing it. Take risks with the styling, and you might drive some buyers away. Include some new technology that proves unreliable, and you'll scare even more of them away. Plus the price must be very competitive, so costs must be kept low. But soon after Toyota locked in a redesign for the 2012 Camry that was more conservative than Rush Limbaugh (and far more restrained), Ford, Hyundai, Kia, and Mazda all introduced midsize sedans with more style, more advanced technology, and more nicely appointed interiors. Plus archrival Honda (finally) seemed to be rediscovering the plot with its redesigned Accord. Toyota's reaction? The Camry has been restyled and updated for 2015, a couple years ahead of schedule.

Powertrain offerings haven't changed. The same three engines introduced with the 2007 Camry remain your choices with the 2015 Camry. But trim options have expanded a bit. The regular four-cylinder and V6 are now available in a luxurious yet extra-sporty XSE model.

But a new trim option initially offered for 2014.5 then continued with the 2015 intrigued me the most: the Camry Hybrid SE. Driving enthusiasts have perceived Toyota's hybrids--with their non-linear power delivery, odd-feeling bimodal brakes, simulated drive-by-wire steering, and nautical suspension tuning--as the antithesis of what they desire in a car. Might the 2015 Camry Hybrid SE, with sleeker styling and sportier tuning, have what it takes to not only compete with the Ford Fusion Hybrid, but alter these perceptions? With this stopgap fix, was Toyota willing and able to do enough? 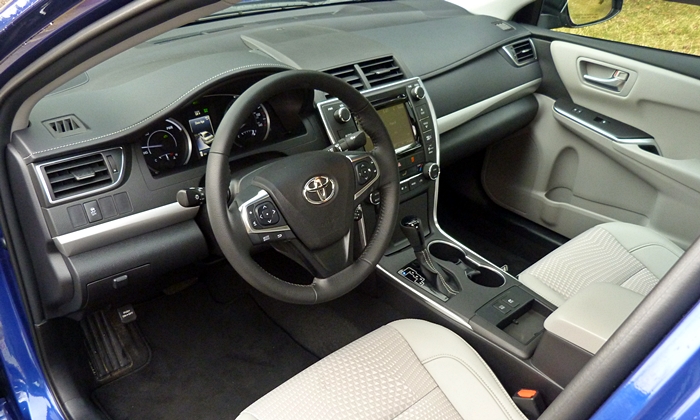 Updated interior has cleaner styling. Just as roomy as before.

In some ways, it''s just as important what Toyota has not changed as what they have. They body and interior might have been heavily revised, but these aren''t parts prone to failure. Most of the mechanical and electronic bits weren''t touched. The engines and transmission have remained the same since 2007. Direct injection, forced induction, dual-clutch automated transmissions--you still won''t find these beneath the hood of a Camry. So the Camry''s outstanding reliability can be expected to continue with the 2015.

Then there's the real world, where, according to the cars' trip computers, my suburban average was in the low 40s in all three (the Lincoln MKZ standing in for the Fusion) and topped 50 on trips with no unexpected stops (i.e. any braking could be gradual enough to rely almost entirely on energy regeneration rather than the friction brakes).

The Camry Hybrid acheived the best reported mpg on my standard school-to-home run--an astounding 70.6--but it started this particular trip with a eight bars in the battery pack (fully charged) and ended it with just two. You can only drive two, maybe three miles on electricity, but when the route totals 7.5 miles even a couple with the gas engine off can generously pad the average.

On a 70-mph highway the Camry's trip computer reported averages in the low 40s. I wasn't able to test the Honda on the highway. The Lincoln MKZ hybrid's reported somewhat better numbers than the Camry's, but there's not a large percentage difference between 43.7 and 47.4. Any number of factors besides the cars themselves (trip computer accuracy, driving speed, wind conditions) could account for this difference.

Frankly, I'm mightly impressed by any midsize sedan that can consistently average over 40 mpg, as these all can with light-footed acceleration and (especially) braking. 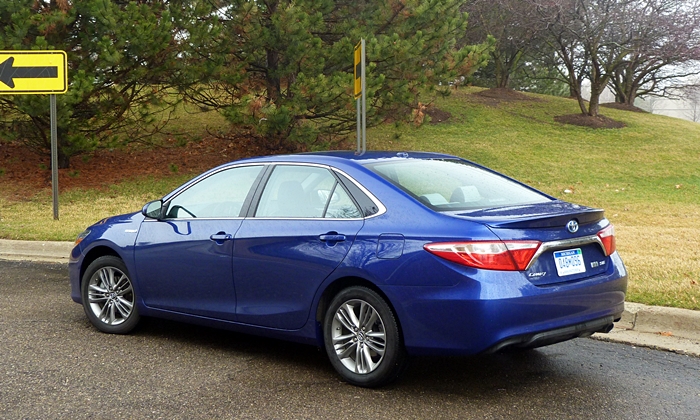 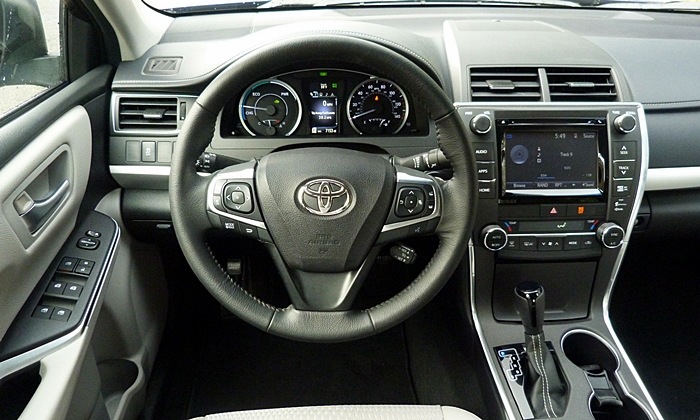 If you want the quickest Toyota Camry, you still want the 268-horsepower 3.5-liter V6 engine. But the hybrid, with a 156-horsepower 2.5-liter gas engine and a 141-horsepower electric motor combining to produce up to 200 horsepower, is easily quick enough to eradicate perceptions that Toyota's hybrids are slow. You can get from a dead stop to 60 mph in less than eight seconds. The Honda Accord hybrid is equally quick, while the Ford Fusion Hybrid, with more weight and less power, takes another second.

These are front-wheel-drive cars, and mashing the throttle makes the steering get a bit jiggy in both the Toyota and the Honda. Their engines can also sound buzzy when exercised. Plus the Toyota's CVT delivers that slipping sensation that renders these transmissions persona non grata with many driving enthusiasts. The Honda, though lacking a CVT in any real sense of the term (its transmission has a single, fixed ratio), still manages a similar sensation in aggressive driving. The Ford powertrain, inclined to grumbling more than buzzing, sounds and feels less frenetic when exercised. But then again it's also less quick.

Of course, few hybrid buyers are inclined to full-throttle antics. Where the Camry's performance truly shines is in typical daily driving. Driven casually to semi-casually, the hybrid powertrain's operation is ultra-smooth and nearly silent. With the addition of a torquey electric motor, the hybrid powertrain feels much stronger at low rpm than the regular four-cylinder engine.

As with the Ford, I actually enjoyed "eco mode" the most. With the throttle relaxed, acceleration feels incredibly smooth. Driving for maximum efficiency in this mode comes naturally. It simply feels right--until you check the faces in your rearview mirror.

The Camry's rear seat isn't quite as roomy as the Accord's but it's close, and both are much roomier than the Ford's. The rear seat cushions in all three sedans are high enough to provide decent thigh support for adults. Missed in the Camry Hybrid SE, though: a rear air vent. If you want one, you'll need a higher trim level--or one of the competitors.

With big knobs and big buttons, the Toyota Camry's controls buck recent trends. They're especially easy to use. Even Toyota's touchscreen-based Entune infotainment system tends to be frustration-free.

The Camry Hybrid's instruments aren't nearly as configurable or as fancy as the Ford's, and they lack the latter's "driving coach," but the power gauge (which takes the place of a tach) provides a clear guide to the efficiency of your pedal applications.

I see what Toyota did here. They took a fairly boxy body and added curves to both ends. The end result should appear more up-to-date to casual observers. But to anyone with an eye for design the new exterior appears forced. Faking a fuller side window outline via a black panel on the rear pillar works no better here than it does elsewhere. The pseudo-window doesn't even line up with the divider between the two real ones.

The Fusion's exterior remains much more organically artful, while the Honda's at least doesn't try to be something it's not (unless that something is a BMW).

Beyond the quick-fix nature of the latest design--they couldn't radically alter the underlying body structure--Toyota has long struggled to produce beautiful cars. Why? Beyond the urge to appeal to a broad market, I suspect that designers have far less power than engineers within the Toyota organization.

The 2015 Camry's interior styling is a major improvement over the 2012's. Extraneous details have been trimmed away, and the center stack now flows cleanly into the center console. The faux metal trim that remains makes some interesting twists and turns.

Materials have been upgraded somewhat, but the door panels in particular retain an economy look and feel. The Ford's interior still seems much more upscale--so much so that Lincoln has struggled to make a case for the higher price of its related MKZ. Honda's interior splits the difference. 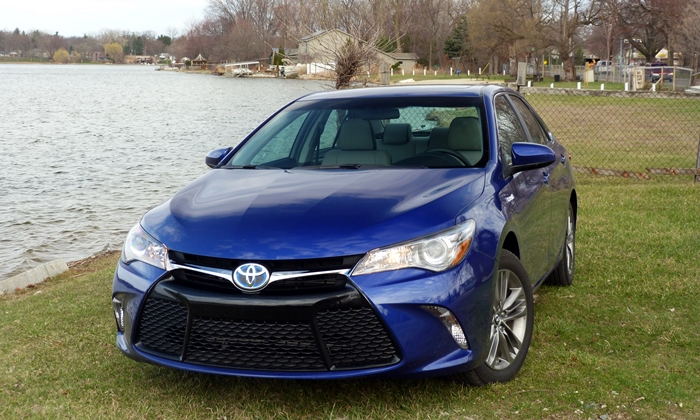 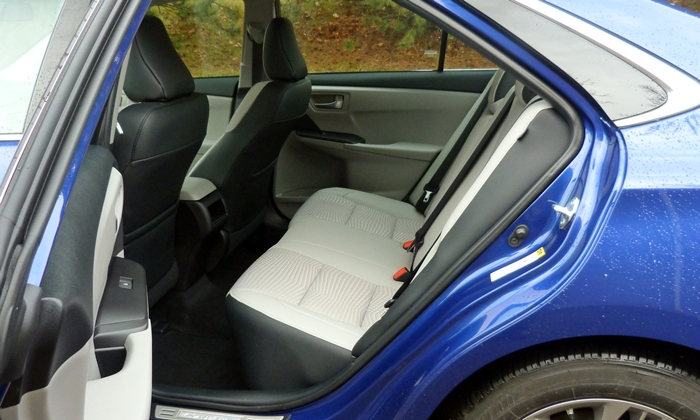 Roomy back seat, but no rear vents.

The 2012 Camry Hybrid's suspension better controlled body motions than the 2007-2011's. But the car still floated and bobbled through unevenly paved curves. The 2015's suspension, at least on the SE, eliminates this float and bobble. But it now, like the somewhat similarly tuned suspension of the Accord Hybrid, reacts too sharply to minor road surface imperfections. The Fusion Hybrid's suspension even more tightly and precisely controls body motions, yet it also better manages the small stuff. The Ford also has the liquidy smooth, insulated refinement at low speeds that typified a few generations of Camry but was largely lost with the 2012 redesign. While the Toyota is quieter inside than the Honda, the Ford is quieter inside than the Toyota.

Though to far less an extent than in the past, handling remains among the reasons not to buy a Toyota Camry Hybrid. At least with the SE, the 2015's steering feels much tighter on center and much firmer off-center. But this newfound firmness feels artificially stiff. The Fusion's steering, though not much more communicative, feels more natural.

While the Camry Hybrid SE's suspension better controls lean and other body motions, you're not going to meld with it any more than you will with the steering. You command, it obeys, but you're not gleeful dance partners.

The Ford and Honda differ greatly in character. Where the Fusion Hybrid feels taut and composed, the Accord Hybrid feels light and frisky, even delicate in its responses. But both are more intuitive, enticingly interactive extensions of the driver than the Camry. Put simply, they remain more fun to drive.

Even large drivers will find plenty of room in the Toyota Camry's front seat. The instrument panel and console are less intrusive than the Ford's, and the footwells are wider. The Accord's front row is roomier in some dimensions, less roomy in others.

All three hybrid sedans have about 12 cubic feet of cargo space, just a couple fewer than their non-hybrid relations. But their trunks differ in expandability. The Accord Hybrid's rear seat doesn't fold at all. The Camry Hybrid's folds only on the right side, and the opening is little more than a slot. The Fusion Hybrid's folds on both sides and yields a much larger opening.

The Toyota Camry Hybrid tends to cost a little less than the Honda Accord Hybrid, but a little more than the Ford Fusion Hybrid. All run in the low 30s, though, when equipped like the tested Camry Hybrid SE. These are sticker prices. Discounts and incentives could widen the gaps, or eliminate them.

These price differences also depend on which features you want. If you want nav on the Honda, you have to step up to the top trim level. You can get it without leather and such in the other two cars. If you want adaptive cruise control or lane departure warning (I don't tend to recommend the latter), only Ford offers these features on a mid-level trim.

The Toyota Camry's rushed updates for 2015 do improve its appearance, inside at least as much as outside, and its dynamics. But even in the new Hybrid SE trim the midsize sedan still is not as attractive or as enjoyable to drive as the Ford Fusion Hybrid. Any shift in consumer perceptions has fallen well short of seismic. On the other hand, the Camry continues to be highly reliable, efficient, roomy, and (when necessary) quick. Ads for the car notwitshanding, purchasing a Camry remains a safe move, not a bold one. This safety continues to come at the cost of disadvantages in other areas, but this cost has been reduced considerably. 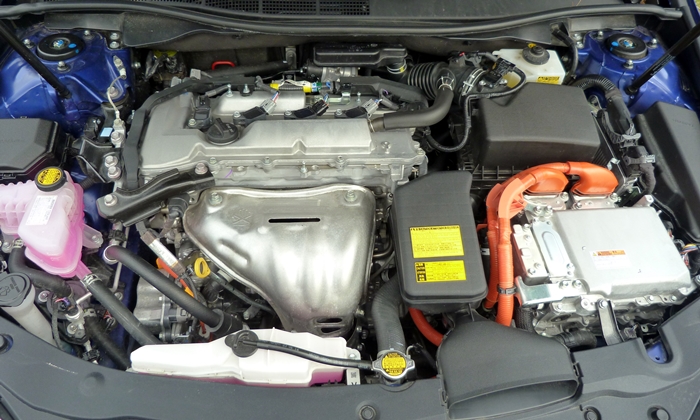 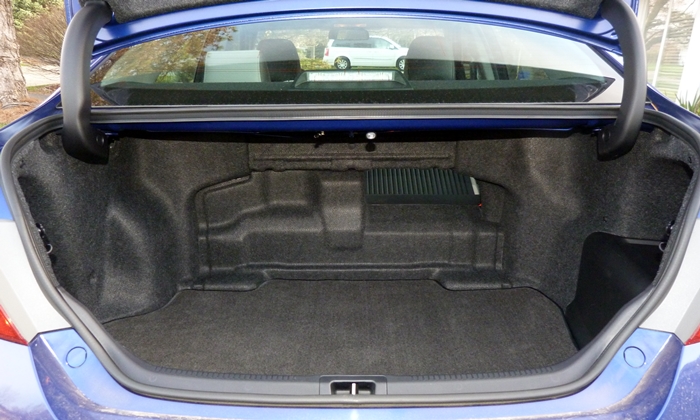 Usefully large trunk, but small pass-through only on right side.

Toyota provided an insured car for a week with a tank of gas. Ford provided meals and insured, fueled cars at an event for invited media.

More About the Camry 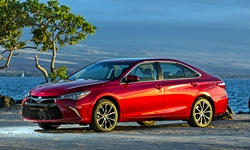 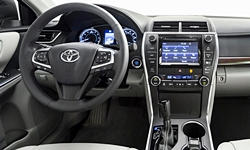