2013 Volkswagen Beetle Pros and Cons: Why (Not) This Car? 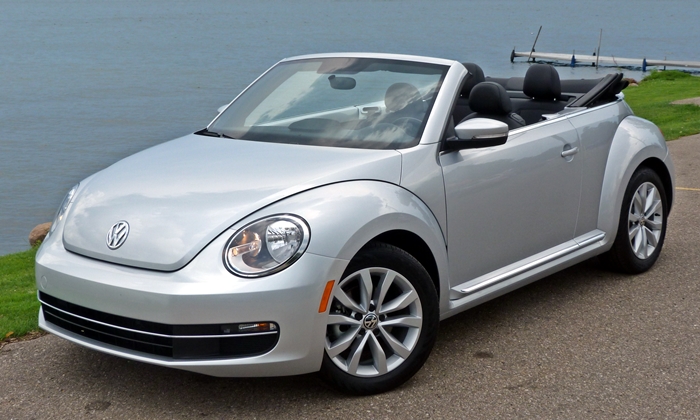 If you want the fuel economy of a diesel-powered car, you have a few choices.* If you want the style and fun of a convertible, you also have a few choices. If you want both in the same car, you have exactly one choice, the Volkswagen Beetle. Your eyes can judge the stylishness of the topless TDI, which was redesigned for 2013. But how much fun, and how frugal? The Beetle TDI convertible has no direct competitors. But those open to a considerably smaller package might also consider the Fiat 500c and Mini Cooper Convertible.

*Unless you live in Europe. Then you have many choices.

Windshield now farther back and more upright, so more like the classic Beetle. more Beetle photos 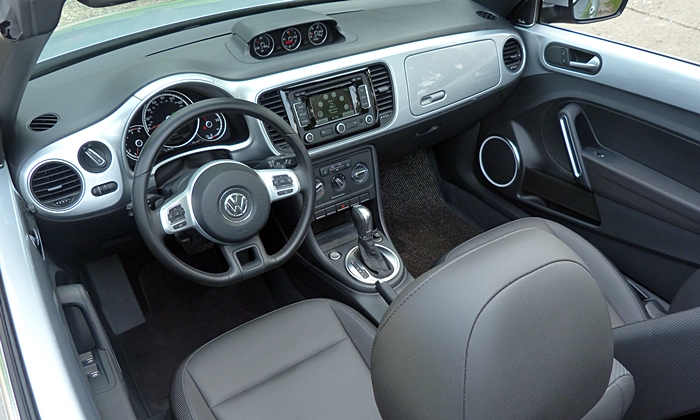 Body-color trim on the instrument panel face and upper doors a welcome relief.

The primary reason people buy Beetles is also the primary reason people don't buy Beetles: styling. Based on looks alone you probably already have a strong opinion of whether you'd like to own one (or not). This said, the current Beetle should have a broader appeal than the 1998-2011 New Beetle. It's less a far-out styling exercise (fore-aft symmetry, circular roof and fenders) and more a 21st-century update of the original. The Mini and the Fiat each has its own distinctive appeal. But the Italian car offers the least top-down style (and the fewest open-air jollies) of the three as it's not really a convertible. Actually a coupe with a large fabric sunroof, the entire body side remains in place when the roof is retracted. The rear side windows can't even roll down. From the front quarter the 500c looks just like the 500 hatchback. Some advantages of the 500c's system: as with a sunroof you can open and close the roof to various degrees and at any speed.

How much difference can a diesel make? The EPA rates the Beetle Convertible's 170-horsepower 2.5-liter gas engine for 21 mpg city, 27 mpg highway. The 140-horsepower (but torqier) 2.0-liter TDI? A much more fuel efficient 28/37. In both cases the lighter hatchback scores a little better. TDI fans claim that the EPA underestimates diesel fuel economy, and they might have a point. While the 2.5's trip computer reported averages in the mid-to-high 20s in suburban driving, the TDI's reported averages in the 40s, even just over 50 with a feather-light right foot and few complete stops. On a 70-mph highway the trip computer reported a two-way average of 38. At lower speeds the TDI should exceed the EPA rating. The Mini and Fiat are considerably smaller, lighter, and less powerful, but with somewhat overwhelmed gas engines they can't match the Beetle's fuel economy (27/35 and 27/34, respectively). Note that diesel fuel tends to cost a little more than regular unleaded, and far fewer stations carry it. 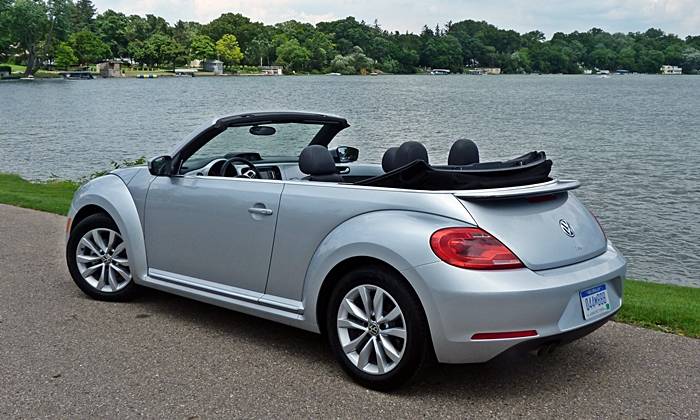 The top stacks more compactly than before, but still cuts into rearward visibility. 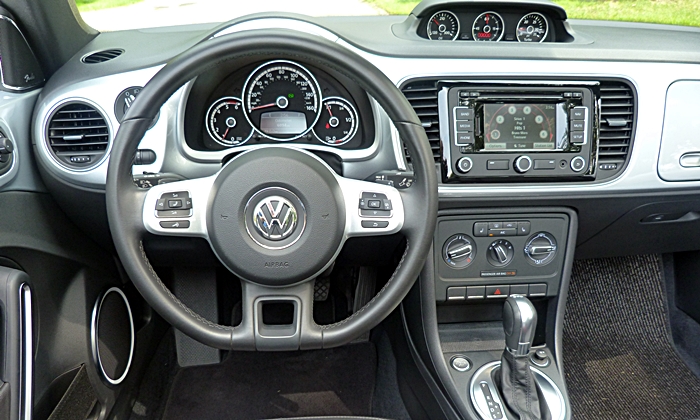 Most controls are easy to operate. Small tach.

But diesels are slow, right? Back when they were last commonly offered in North America, in the 1980s, absolutely. But not with the latest technology. A diesel engine might produce much less power at 5,000 rpm (which is as fast as the TDI can spin), but how often do you venture near the red line? Down at more typical engine speeds, from 1,500 to 3,000 rpm, the diesel is much stronger than the gas engine, as suggested by their respective peak torque figures (236 vs. 177 lb-ft). In around-town driving the diesel moves the car effortlessly (though from a dead stop the turbo can take a moment to spool up). Technological advancements have also made the latest diesels smoother, quieter, and cleaner. The characteristic diesel grumble is most evident at idle from outside the car, but isn't objectionable even then. Once under way most people's ears wouldn't note anything out of the ordinary. I've never driven a Mini with the 121-horsepower base engine, so I can't report on its performance. The Fiat's 101-horsepower engine is far harder on the ears, and generally feels overwhelmed.

Whether because it weighs a little more, or because VW tuned its suspension for more compliance, the Beetle convertible rides more smoothly than the hatchback, which can feel jittery. Though still far from cushy, the Beetle also feels considerably more solid, smooth, and composed than the Fiat or the Mini (both of which have ride quality among their why nots).

Though far from luxurious, the Beetle feels more solid and substantial than the 500c, from its body structure (despite the total lack of a roof) to its various interior bits. The Mini's body structure is plenty solid, but some of its interior parts are a bit iffier.

With a more upright windshield and a more compact top stack (when open), the Beetle's redesign improved outward visibility. But the convertible remains a difficult car to see out of, especially to the rear. An under-sized rearview mirror doesn't help. Rearward visibility is even worse in the Fiat, especially with the top retracted, but forward visibility is more open.

Back in the 1960s VW entreated Americans to "think small." Lately, though, the German manufacturers cars have been getting bigger and bigger. The latest redesign added over two inches to the car's length (now 168 inches) and over two inches to its width (now a midsize-like 71.2 inches. Compared to the 146-by-66-inch, 2,822-pound Mini and the 140-by-64-inch, 2,434-pound Fiat, the 3,340-pound Beetle TDI convertible is a big, heavy car. As noted earlier, solidity and ride quality benefit from this additional bulk. But rear seat room does not. Sure, the Beetle Convertible's rear seat is more viable than the MINI's, but bars to clear rarely come lower. The Fiat is in the same (adults-in-a-pinch) ballpark. In addition to the space shortage, the VW's rear seat back is uncomfortably upright. 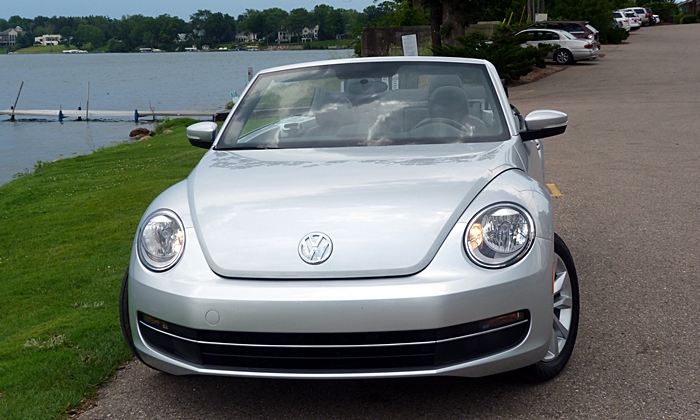 Iconic Beetle face, with a couple more inches between the eyes. 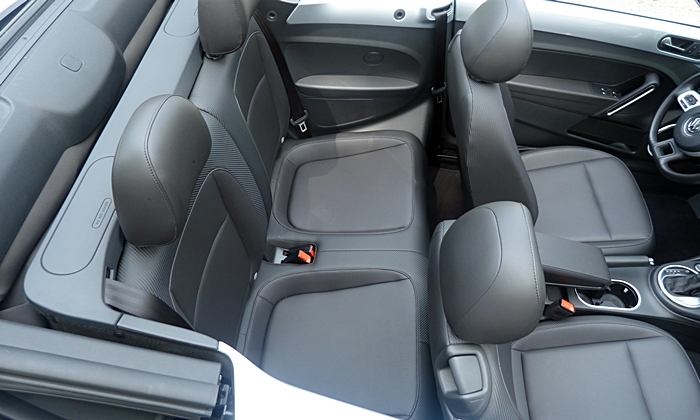 There's more leg room back here than there appears to be in the photo. But not much more.

There's not much space for luggage, either. But, as in the Fiat, the rear seat can fold to expand the trunk, so luggage space is truly in short supply only if you need to put people back there.

Compared to that the 1998-2011 New Beetle, the current car's interior is (like the exterior) less style for its own sake and more a blend of the original's minimalist aesthetic and today's standard VW issue. The herringbone pattern in the some of the leatherette is subtly interesting, and there's more visual excitement here than in a Golf or Jetta (especially when the body-color interior bits are something other than black or silver). But those seeking cheery, bubbly fun are more likely to find it in the Mini or Fiat. The much-loved / much-ridiculed bug vase has been relegated to the dealer accessories list, and any sense of whimsy largely departed the Beetle interior with it. Fans of functionality will appreciate the extra glove box and three-dial HVAC controls, though.

You can get red or blue/black leather in the 200-horsepower Beetle Turbo, but not in the TDI. Here you're limited to leatherette in black or beige.

The Beetle could hardly handle more safely or predictably. But the tires' grip is limited, and agility is in even shorter supply. In my view, a cute convertible should respond quickly and crisply to steering inputs. The Beetle instead has the deliberate, mature moves of a family sedan. Those seeking friskiness will find much more of it in the Fiat and especially in the MINI. The Fiat has its own dynamic flaws, including steering that feels more artificial and tippy handling. Especially at highway speeds the Beetle's more stable handling could become a why rather than a why not. Against the Cooper, the Beetle more clearly comes up short in handling.

Volkswagen doesn't charge much for the Beetle's nav system, rolling it into a $1,300 package that also includes a 400-watt Fender audio system and 18-inch wheels. Good thing, as this very basic system isn't worth much. Especially unhelpful: it displays few street names. Then again, you can't even get a built-in nav system in the Fiat. Instead, a portable unit plugs into a hole on top of the instrument panel. The Fender audio system can become overwhelmed by wind noise with the top down at highway speeds. Otherwise its plenty powerful, with a clear sound and strong bass.

You can get the Beetle TDI two ways: with the $1,300 sound and navigation package, and without it. Four ways if you count the choice between a manual transmission and the dual-clutch automated manual transmission (DSG). With both, the 2013's list price comes to $31,090. (For 2014, the price increases to $31,715.) With the gas engine the Beetle Convertible costs $1,800 less. The EPA estimates that the TDI will cost the average driver $400 less in fuel. Combine this with the diesel Beetle's higher resale value, and the TDI's additional cost is minimal. Even though Fiat charges an extra $4,000 for what is essentially a large sunroof, a similarly equipped 500c is still $5,590 less expensive ($25,500) than the tested car. Adjust for the VW's additional features and the difference shrinks to about $4,600. Much less money, but also less car, less power, lower fuel economy, and too much upper body structure. The VW feels like twice as much car. The MINI Cooper is a much closer match in price. Equipped similarly its $325 more than the tested car, and includes about the same in additional features. So, for essentially the same amount of money, do you prefer the greater size, power, and fuel economy of the Beetle, or the frisky agility and flashy style of the Cooper?

With the diesel engine, the Volkswagen Beetle Convertible tops its closest topless (or at least semi-topless) competitors in both fuel efficiency and performance. Consider frugality achieved. But what about fun? Though any convertible is fun, beyond the top this is more debatable. The Beetle does not feel playful the way the Fiat and especially the MINI do. It's too big, heavy, and German-engineered for that. Perhaps you prefer substantial to playful anyway. If you prefer a car that only looks like a toy, and doesn't also feel like one, the Beetle scores a clear win over the Fiat 500c. And against the Cooper? The MINI is more fun to drive, but the VW, with more rear seat and cargo space, is more practical. This one comes down to tastes and priorities. 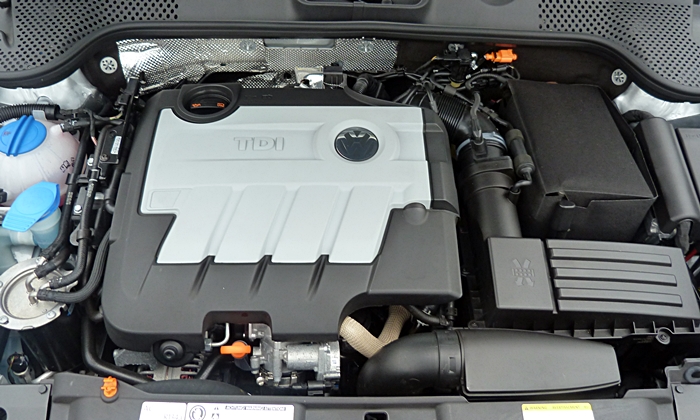 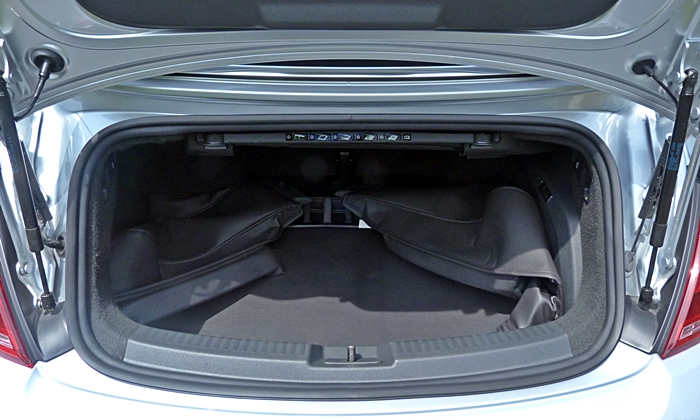 Not much will fit back here even if the boot for the soft top is removed.

Volkswagen provided an insured Beetle for a week with a tank of diesel. Suburban Fiat in Ann Arbor, MI, helpfully provided a 500c for a test drive. They can be reached at(734) 794-5875.

More About the Beetle 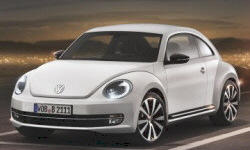 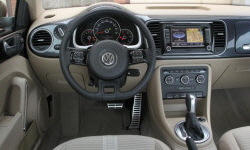