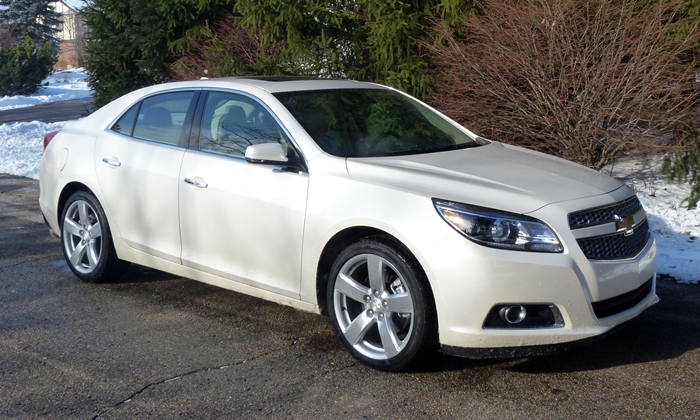 Once upon a time, Chevrolet ruled in the midsize sedan segment. Then the Taurus arrived, followed by the Accord and Camry. In recent years Nissan, Hyundai, Kia, and VW have become major players. GM's latest attempt to regain the throne, the 2013 Malibu, was initially available only in disappointing "Eco" form. Now that two more engines are available, including a 259-horsepower 2.0-liter turbo, does the Malibu deserve another look?

Similar to past Accords and Camrys, but with a more aggressive face. more Malibu photos 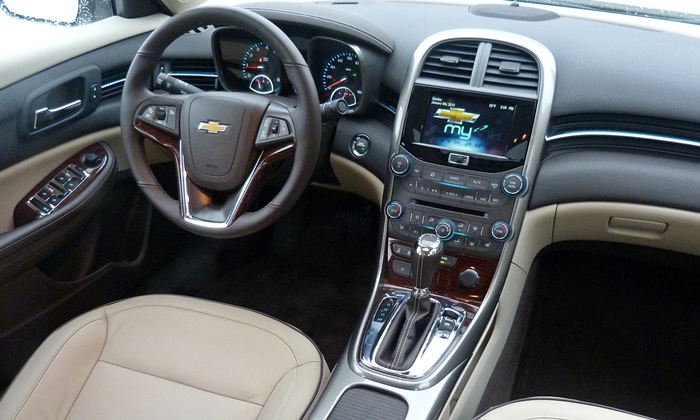 Available in some warm color combinations, not just black. Upscale look and feel.

Even the Malibu Eco had some strengths, and the largest carries over to the other variants. The Malibu's interior might be the best-trimmed in the segment. Up front at least many of the surfaces are soft to the touch and everything appears precisely assembled and feels solid. Extensive blue ambient lighting and colorful trim options make for a warm, luxurious interior ambiance. The new Ford Fusion also has a high quality interior, but in the top trim level it's only offered in black (sporty for some people, but somber for others). In the Malibu's rear seat the door panels are simplified and harder to the touch, but this is a Chevrolet, after all, and not a Buick.

Even with every major player making quietness a top priority, the Malibu leads the field in this area. To my ears, the Malibu seemed even quieter inside than the Cadillac XTS. One caveat: the 245/40WR19 Eagle RS-As included in the Electronics and Entertainment Package (go figure) are noisier than the standard tires. But the Malibu's exterior looks much better with them, and road grip also benefits. 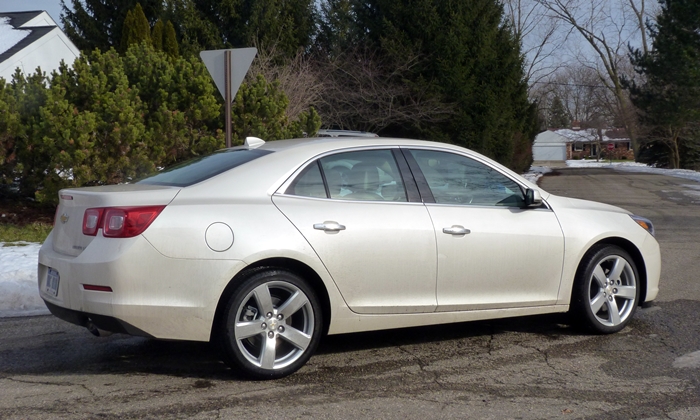 Trunk a little busy, but handsome if not leading edge. 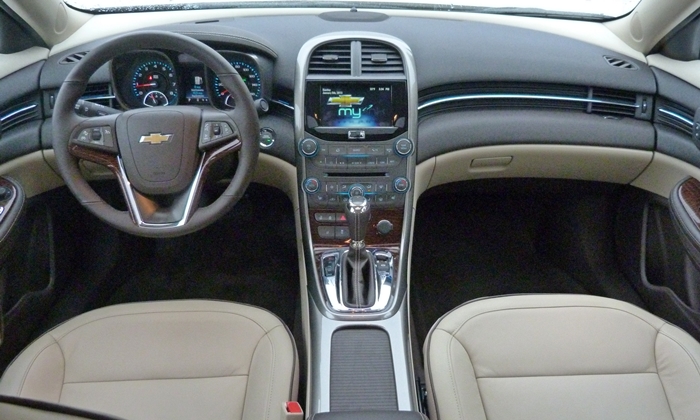 Heavy use of strakes on the passenger side not the most attractive detail.

Handling was overly sacrificed for the sake of a pillowy ride in the Malibu Eco. That car soaks up the small stuff exceedingly well, but floats and wallows over big dips and bumps. When adding the turbo engine, Chevrolet didn't attempt to transform the Malibu into a sport sedan. Instead, they firmed up the suspension and steering just enough to provide an excellent balance between ride and handling. You feel (and hear) small bumps a little more, but the suspension controls body motions much better over seriously subpar roads, and still with never a hint of harshness.

The Malibu turbo's steering and handling didn't make me wish for a mountain road, but in suburban driving they simply "felt right." Their weighting and feedback made hustling the Malibu a more intuitive and thoroughly satisfying exercise than it is with most midsize sedans. Given my disappointment with the Eco's handling, this was a huge surprise. I like the firmer, more handling-oriented tuning of the Fusion even more, but suspect I'm in the minority. Front-wheel-drive is the Malibu's weak link if you really want to scoot. Give the engine much gas in a turn, and the inside front tire readily loses traction. Unlike with the Fusion, all-wheel-drive is not an option.

Chevrolet joins the latest generation of infotainment systems with MyLink. So far, it's my favorite. Pairing your phone is quick and easy. “Home,” “back,” and “fav” buttons never leave the top left corner of the screen. Each feature--including a well done Pandora app, weather, movie times, and gas prices--gets a large square icon on the scrollable home page. Unlike with some more comprehensive touch-based systems, you can’t control the HVAC or heated seats through the screen, but there’s no need to, with large, logically organized conventional knobs and buttons for these and other common tasks.

On paper, the Malibu's rear seat is only a little tighter than those in the 2008-2012 sedan and in competing cars. In person, rear knee room would only be marginally competitive in the compact sedan segment. Sitting behind my 5-9 self, my shins graze the front seatbacks. GM is rushing some revised seats to market. But if past attempts to fix a cramped rear seat are any indication, this won't make a substantial difference. The rear seat in the Ford Fusion is roomier, if also short of the segment's quasi-limos.

Unlike in some recent GM sedans, I had no issues with the view forward from the Malibu's driver seat. The pillars flanking the reasonably raked windshield aren't too thick and the instrument panel isn't overly massive. The view to the rear is much more constricted due to thick pillars and a high trunk. But my major beef is with the center console, shifter, and armrest, which are all positioned a couple inches farther rearward than they should be. As a result, you can't rest your right arm while using it to steer. Nor can you comfortably instruct the transmission. In addition to the shifter's uncomfortable location, the manual shift toggle is on top of the knob--putting it beneath your palm rather than your findertips. Luckily GM's six-speed automatic has been given some much-needed smarts in this application. Relying entirely on my right foot for instruction, the transmission usually found the gear I wanted when I wanted it. 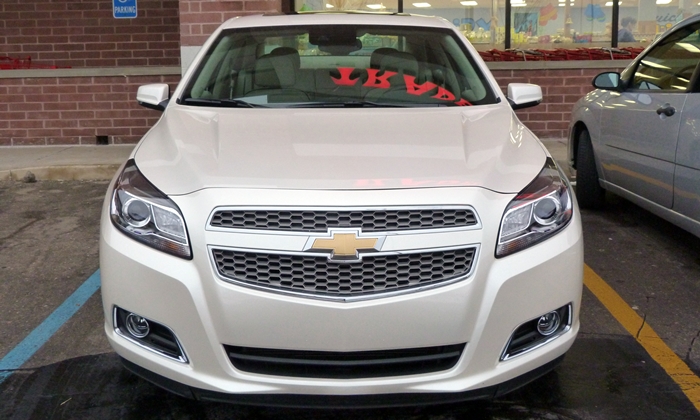 Not everyone's a fan of the big gold bowtie. 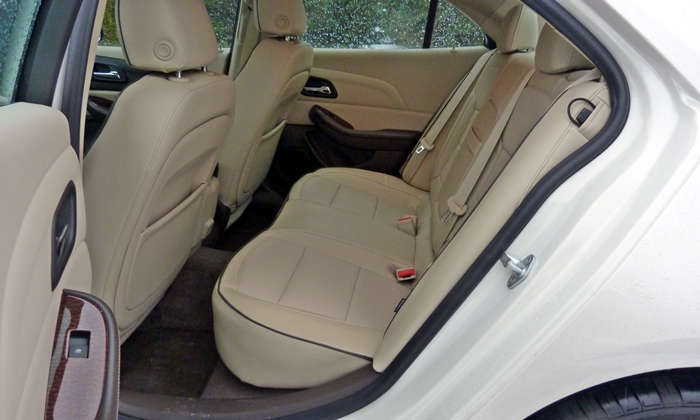 The #1 reason not to buy a Malibu.

The EPA rates the Malibu turbo 21 mpg city, 30 highway, below the Fusion 2.0T's 22/33 and the Sonata 2.0T's 22/34. The V6s in the Accord and Altima also do better?so much for the inherent fuel economy advantage of a turbocharged four over a V6. The trip computer confirmed the EPA ratings, with a little over 30 in straight 75 mph highway driving and anywhere from 19 to 27 in the suburbs depending on the frequency of reds and the heaviness of my right foot. Go with the traffic flow, and you'll split the difference at about 23.

Chevrolet (along with Ford) no longer attempts to undercut the Japanese, much less the Koreans, with its pricing. Without nav (another $795), an otherwise loaded Malibu LTZ turbo lists for $33,950. Do without the tricoat white paint and "cocoa fashion" interior trim, and you can shave $495 and $150, respectively. So shaved, the Malibu undercuts a similarly-equipped Ford Fusion Titanium by $325 (suspiciously similar to an unusual $365 mid-year price cut), but adjust for feature differences using TrueDelta's car price comparison tool and the Ford emerges about $500 less. A Hyundai Sonata Limited 2.0T is nearly $2,000 less before adjusting for feature differences, about $700 less afterwards. A Honda Accord Touring V6 checks in a few hundred over the Chevy, though. These sticker price differences aren't large enough to constitute a "why not to buy" for the Malibu. But even a small price disadvantage means that buyers must actually prefer the Chevrolet, or they'll go elsewhere.

Even with the substantial improvements that attend the turbocharged engine, the Malibu loses the numbers games. It's not the quickest, most efficient, roomiest, or cheapest car in a very competitive segment. But it does look good, especially on the inside, and in 2.0T form drives even better. Midsize sedan buyers who care most about how a car looks and feels should check this one out. Some strengths are shared with the 2.5-liter engine and the Eco, but I'd definitely avoid the latter. 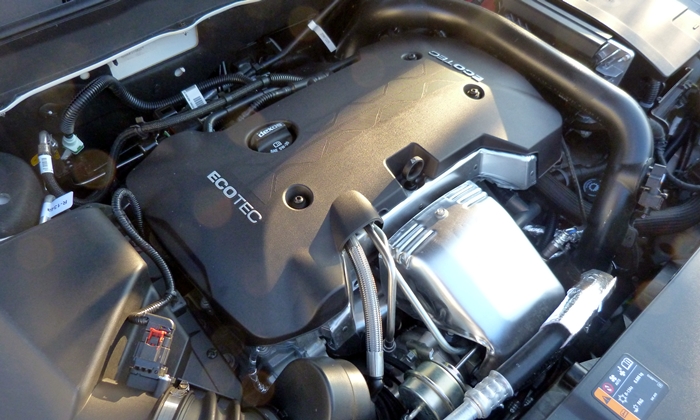 Good power and refinement, but for a soul seek a V6. 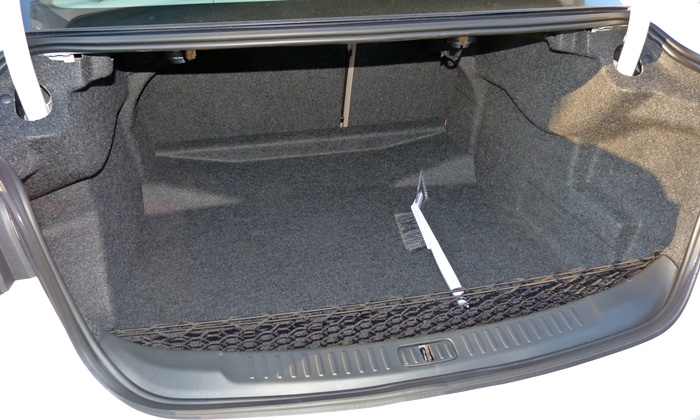 One-week loan. Chevrolet provided an insured car with a tank of gas.

More About the Malibu 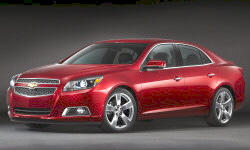 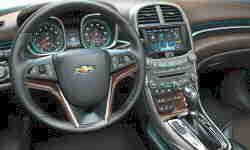