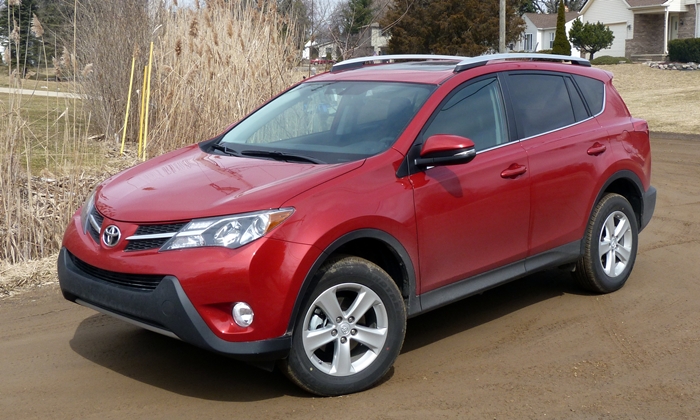 Toyota pioneered the compact car-based crossover with the 1996 RAV4. If they'd gotten the formula right, they'd have owned what has become a very large market segment. Instead, this honor went to Honda and Ford. For the 2013 model year, Toyota has once again redesigned the RAV4. Are they closer to the mark this time around? 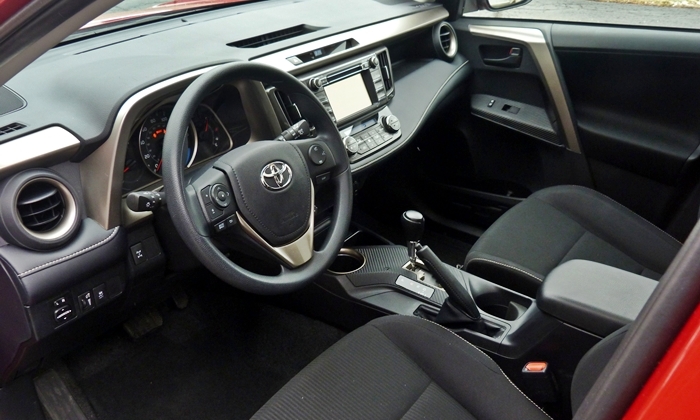 Even with all the faux metal, it's dark in here. Industrial vibe.

The Toyota RAV4 has consistently been among the most reliable cars in TrueDelta's Car Reliability Survey. While the Honda CR-V might be even better in this area, I cannot see picking it over the Toyota on this basis any more than I'd call a 6-foot, 6-inch man short because he has a 6-foot, 8-inch brother. Compact crossover buyers who put a very high priority on reliability tend to choose between these models.

For years, car reviewers have denigrated Toyotas as boring appliances. Well, Toyota has grown tired of this criticism. In a surprisingly successful change, the new RAV4 is quite fun to drive. In turns, the front suspension takes a firm set following a moderate amount of well-controlled lean, and you'll be hard-pressed to elicit any sway from the rear end. The all-wheel-drive system now helps minimize understeer by proactively shifting up to 50 percent of the engine's torque to the rear axle. Keep pushing, and the RAV ultimately understeers, as any properly engineered vehicle does, the outside front tire lapsing into a safe, progressive slide. The fix is the usual one: just ease off the gas.

The tested RAV4 XLE's 225/65HR17 tires are far from performance fare, so its limits aren't high. The Limited's 235/55HR18 tires should be a little grippier, and might further improve the already better-than-average feel of the Euro-firm steering.

When on (the default), the stability control system cuts in early, and far from transparently. When I could remember to, I shut it off. Memory is critical because the system can only be deactivated when the RAV4 isn't moving, by holding down a button for about five seconds. Other such systems can be shut down with the vehicle in motion, and I wish the RAV4 were the same way. Even with the stability control system off the RAV4 handles very safely.

Short of the outside front tire's limits, the RAV4 feels agile and composed even on poorly surfaced roads (and for the most fun find a dirt one). The chassis is so capable that more power could be put to good use. The 176-horsepower 2.5-liter four-cylinder engine provides adequate acceleration, but no thrills at corner exits (or anywhere else). This is typical of compact crossovers with neither six cylinders nor a turbo (last year's V6 is no longer offered). The automatic transmission gained two ratios with the redesign, for a total of six, and can be manually shifter via the lever. Limiting comparisons to other, similarly-propelled compact crossovers, I enjoyed driving the RAV4 more than any other save the Mazda CX-5. And perhaps more than the Mazda as well. (More on this when I review the 2014 Mazda CX-5.)

In comparison, the CR-V, though equally safe, feels soft, insulated, and a touch clumsy. It doesn't help that the view forward from the Honda's driver seat seems more minivan than SUV. The RAV4's instrument panel is significantly higher. While this does reduce forward visibility, it helps the Toyota seem more car-like. 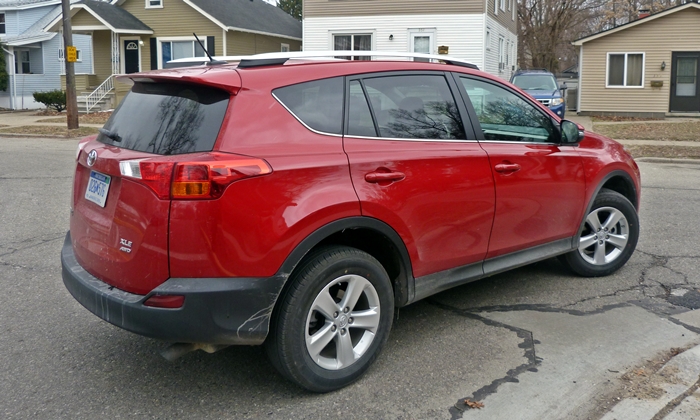 Also smoother from this angle. Note shelf around the base of the rear window. 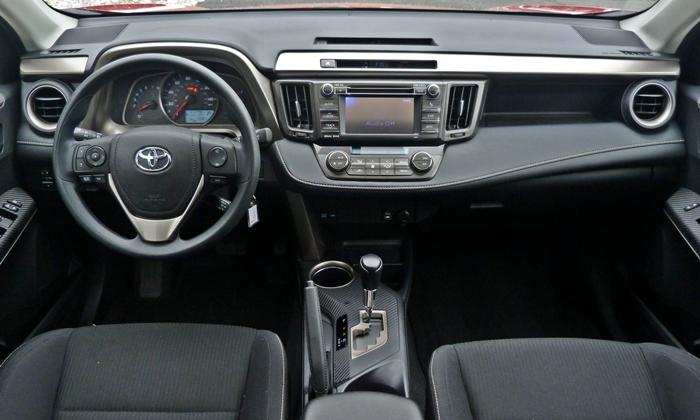 The first two generations of the Toyota RAVs were much smaller than contemporaneous Honda CR-Vs. More than perhaps any other difference this one probably explains Toyota's lack of segment leadership. The third-generation RAV4, introduced for the 2006 model year, was much larger, and finally about the same size as the Honda. The new RAV4's body is an inch lower, but also a few inches longer. Compared to the CR-V, it's 1.6 inches longer, an inch wider, and 0.7 inches taller. This translates to a slightly roomier interior, and probably the roomiest in the segment unless one includes the boundary-defying Santa Fe Sport, Chevrolet Equinox, and GMC Terrain. Sitting behind my 5-9 self, I have nearly five inches of knee room in the Honda. Quite good, but I have seven inches in the new RAV4.

Beyond sheer space, the RAV4's rear seat cushion is a comfortable height off the floor, and its rear seat back reclines over a relatively wide range. The Honda's rear seat back can be set in only two different positions that aren't far apart.

Add a third passenger, though, and the rear seat no longer seems so roomy. My three kids aren't large, but they complained about the amount of room. The reason isn't hard to find: for some reason the new RAV4 only offers 48.8 inches of rear hip room. This is much better than the 43.3 inches in the 2012, but still well short of the 53.3 inches in the CR-V. So, while the RAV4 has the edge in knee room, the Honda easily wins a hip room comparison.

The Toyota RAV4 similarly tops other compact SUVs--even those that aren't truly compact--with 38.4 cubic feet behind the second row and 73.4 cubic feet behind the first. In the most significant change with the redesign, the spare tire has been moved from the tailgate to under the floor, so that the tailgate can now open up (and entirely out of the way) rather than to the side. The side-opening tailgate was probably the #1 "why not" with the previous RAV4.

Toyota's Entune infotainment system, which supports apps (as long as you also download an app onto your phone) and includes a navigation system, adds another $1,030. To get nav on the Honda it's necessarily to step up to the EX-L, which lists for $3,460 more than the RAV4. Adjusting for feature differences (e.g. the EX-L's leather) reduces the gap by $1,100, to a still sizable $2,300.

Among popular compact SUVs with sunroof and nav, the Toyota RAV4 is the least expensive.

The RAV4's athletic handling comes at the expense of ride quality. Though its suspension isn't as firm as the twice-as-expensive yet less talented Lexus RX 350 F Sport, it is much firmer than a Honda CR-V's, and even a little tighter than a Mazda CX-5's. All but the smoothest roads set the RAV4 a-jiggling. Not a lot, and maybe not even enough to mildly annoy, but it's there. The Mazda and especially the Honda do a better job of taking the edge off the small stuff.

To be fair, bumps are heard more than felt in the RAV4. If a tire crosses a bump or divot, you hear it. My decade-old Mazda Protege5 is the same, times ten. I kind of like the sensation when I'm in the mood to drive, as it makes me feel more in touch with the road. But even to my ears this soundtrack seems raw and even cheap. And if I'm trying to relax, then the pitter, patter, and ping of the tires certainly isn't welcome. You'll also hear considerable road noise on concrete highways.

Wind the RAV4's engine out, and it sounds fairly refined for a largish four-cylinder engine. But when you first tip lightly into the throttle, and sometimes when you're cruising as well, the engine drones. Like the tire noise, but with no redeeming aspects, this cheapens the car. 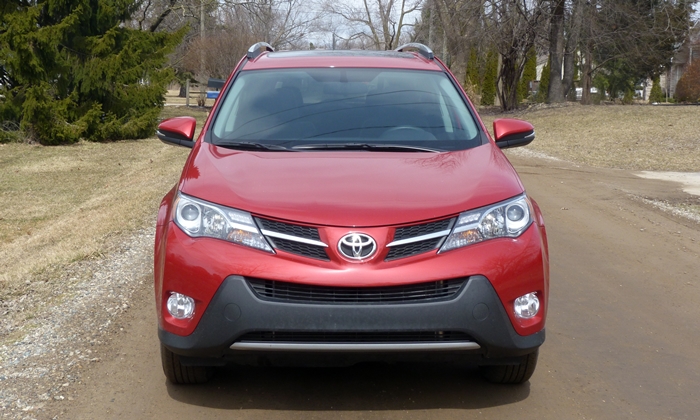 Split grille unusual for a Toyota.

The most legroom among truly compact crossovers.

Our theme continues into a third category. Even in the lesser trim levels the new Toyota RAV4's interior includes an upholstered and stitched lower instrument panel. The problem with this decidedly upscale detail is that the rest of the interior looks and feels cheap in comparison. The steering hard plastic steering wheel hub's fake stitching, which would appear chintzy even in a $10,000 crapbox, looks even worse when compared to the real thing just inches away. More of the fake stuff graces the molded parking brake handle.

Why is the fake stitching present to begin with? In the RAV4 LE and XLE the steering wheel is not leather wrapped. Why would the hub be upholstered if the rim isn't? This lack of consistency pervades the design (or lack thereof) of the RAV4's interior. We've got faux metal trim, some black plastic herringbone surfaces, the aforementioned fake black and real white stitching, and both round and rectangular air vents. Gayla, critiquing the interior, said, "This [upholstered lower instrument panel] is nice. The rest looks like a bunch of spare parts thrown together."

The RAV4's exterior styling is more debatable. I find it an improvement over the more upright, less organic previous RAV4. Not beautiful, but somewhat cute, with better proportions than the butt-heavy CR-V and no objectionable details. (Some people might find the new split grille and protruding tail lights objectionable.) On the other hand, the Ford, Hyundai, Kia, and Mazda all appear more sophisticated and stylish.

The RAV's controls are generally easy to understand and operate. But the center stack is actually a couple of inches right of center, making some of them hard to reach and the smallish, insufficiently shaded touchscreen hard to see, especially in bright sunlight. Just about every other compact SUV has a centered center stack. Why not this one?

While we're on the subject of ergonomics, the useful buttons for the "econ" and "power" modes, and that to turn off the stability control, could all be easier to reach.

How much you like the new Toyota RAV4 will depend on your priorities. If handling sits at the top, then you'll be more willing to forgive the RAV4's subpar sound insulation and refinement. I love driving my Mazda Protege5 despite (and even partly because of) its rougher, noisier ride. I similarly enjoyed driving the Toyota Yaris SE small hatchback more than most reviewers did. For better and for worse, the RAV4 is the Yaris of compact SUVs. Many cars these days have had the fun refined out of them. Not these.

The downside of the noise, lack of refinement, and disheveled interior styling is that the RAV4 lacks the premium look and feel spreading through the segment. A Honda CR-V, despite also not having the nicest interior or quietest ride, is a luxurious little minivan in comparison. The Ford Escape and Mazda CX-5, while also fun to drive, manage to look and feel more expensive.

Beyond how it looks and drives, the RAV4 has a very roomy interior and should be highly reliable (especially after any initial bugs are caught and worked out). Power is adequate, and fuel economy (EPA 22 mpg city, 29 highway) is competitive. The list price is at least a little lower than others. So based entirely on practical considerations the RAV4 is a solid choice. But the CR-V rates similarly in these areas, and isn't much more expensive (unless you want nav but don't care for leather). People more interested in a (relatively) smooth, quiet ride than in sporty handling will continue to gravitate toward the Honda.

What about the RAV4 vs. the CX-5? Wouldn't driving enthusiasts seeking a compact crossover similarly gravitate toward the Mazda? Stay tuned. 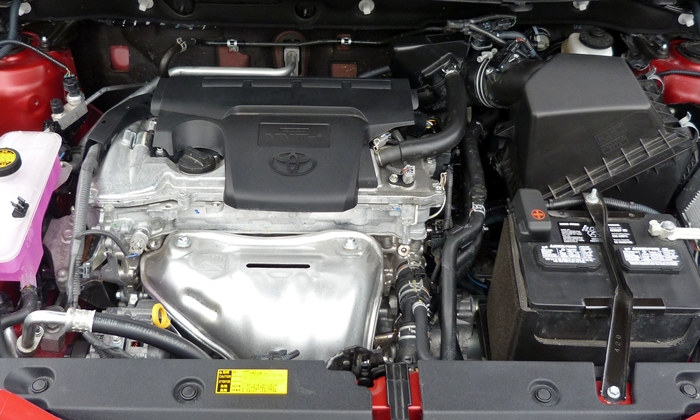 An adequate 176 horsepower from 2.5 liters, but prone to drone. 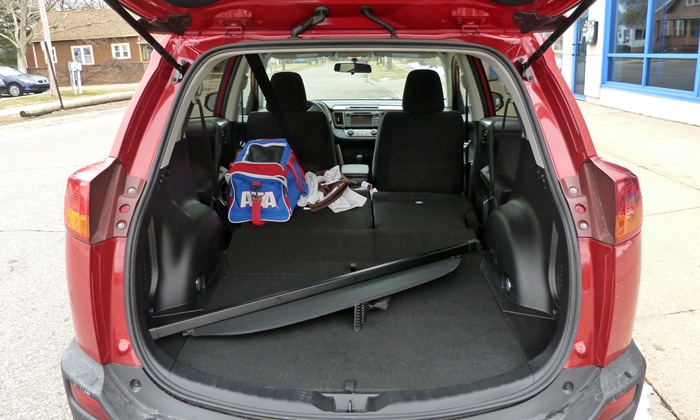 Floor not quite as low as in CR-V, but nearly flat.

Toyota provided an insured car for a week with a tank of gas. Ferndale Honda provided a CR-V for comparison purposes. They can be reached at 248-548-6300. 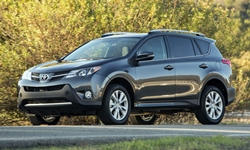 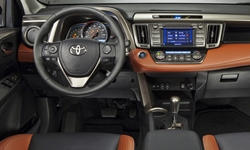