Active motion front seating is a must. I like the Lincoln MKZ hybrid. The Taurus SEL is nice but I wish Taurus would have the hybrid.

Sorry for the delay. I typed up a response a day or two ago, but must not have submitted it. I think I might have gotten sidetracked while verifying one thing: that there are no other cars with a massing driver seat in the same price range as the MKZ and Taurus. I don't think there are.

Between these two, the MKZ is easily the better car. Both Gayla and I really enjoyed the week we had the hybrid, which I think suits the character of the car more than the other two engines. (My review is linked in the menu beneath the photo.) So it seems the best choice for what you're looking for.

The BMW 5-Series and Mercedes-Benz E-Class also offer the feature, but they're far more expensive than the MKZ.

The only cars I've actually driven with massaging seats are Mercedes, so I can't comment on whether one is better than the others. Car & Driver once compared a few. 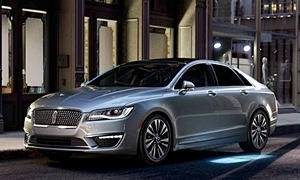