Fuel-efficient and reliable AWD with luxury styling around $10k. Two seats is manageable but back seats would be preferred. Bonus points if slick enough to be a reasonable commercial vehicle.

Vehicle needs to have enough overall appeal with great gas mileage to offset AWD or needs to have AWD with good gas mileage. Luxury interior and styling I find appealing also are pluses. I'm mechanically-inclined and can maintain the vehicle but also would prefer a strong drivetrain with reasonable electronics. I love the S500 4Matic and like the RX330, as well as the 330xi. I'm looking for more options and trying to narrow down the pack, given the multiple years and hit or miss nature of most things vehicular.

I'm not sure there is such a thing as a reliable $10,000 S-Class. Reliability tends to vary directly with the ratio between the current price and the original price. It sounds like you don't need the interior space of an S-Class, so I'd recommend something smaller as it will be newer, more reliable, and more fuel-efficient.

You don't mention any domestic cars. In general, a domestic car has some advantages. You can get a newer car within your price range, parts are less expensive, and they're less complicated, and so easier to work on.

On the other hand, the people for whom older European cars make the most sense are those willing and able to do their own work, as the market tends to base car prices on what it costs to pay someone else to maintain a car, and European cars are the worst in this regard (lots of expensive labor).

On fuel economy: AWD luxury cars with good fuel economy have only happened too recently to have depreciated down to the $10,000 level. Low 20s might be possible, but I wouldn't count on much over that.

Two things I hope you can clarify:

1. Which body style would you prefer?I'm going to just consider sedans for now, to keep the list somewhat manageable.

2. What sort of commercial vehicle? Just something that will look good when you drive up to visit a client, or will it have to carry people and/or cargo?

The most reliable and fuel efficient $10,000 sedan with a premium brand is probably a Lincoln MKZ. But I suspect this won't be appealing to you. Nor will a Chrysler 300. A Cadillac CTS could be the only viable domestic option.

With Japanese and European brands, I'd opt for a compact since you don't seem to need a lot of interior space.

Japanese compact sedans include the Infinti G35/G37 and Lexus IS. The issue with the latter: those in your price range will be IS 250s, which can feel sluggish.

If you do want something larger, though, the midsize sedans from these makes aren't much more expensive used. You might just have to go one model year older.

With any of these, newer is better. It looks like you should be able to find a 2008 in your price range.

From the cars you list, it sounds like handling isn't a priority while a prestigious brand is. From this, we have my final suggestions: G35, C-Class, A4 (which can be hard to work on, but which will be easiest to find).

Your thoughts on these? 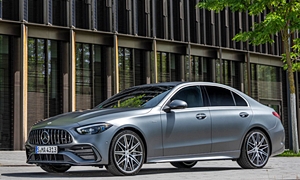