I'm looking for something to replace my Hummer H1. It needs to be able to tow at least 3500 lbs and have room for the occasional long trip. These long trips will usually be just me and some hunting / fishing / camping equipment.

It will also be used for running errands around town. I work from home, so 'daily driver' doesn't really mean the same thing for me as it does for most folks.

I have a 2007 Jeep GC Limited. First one I have owned and it has been a great vehicle. I drive a lot and this is comfortable, great in snow, and feels solid. No signficiant issues, but I have kept it very well maintained...I am 3rd owner. I would recommend this group of vehicles...several friends have them and are well over 150K with no major repairs. Since you are going to be pulling possibly, I would go with the 5.7 Hemi. I have the 4.7, but I don't pull anything of significance. Mileage is about the same. Good luck in your search.

Normally I'd wonder about the suitability of a Wrangler or an Xterra for long trips, but if you've been fine with the ride and noise levels of an H1 a Wrangler shouldn't be too far off.

Jeep only recommends towing 3,500 lbs with the four-door Unlimited, not with the two-door, probably owing to the latter's much shorter wheelbase.

If you're considering the Wrangler and Xterra, you should probably also check out the Toyota FJ Cruiser. If reliability is at all a concern, the Toyota is easily the best of the three in this area.

The Cherokee would be smoother, quieter, more comfortable, and much more fuel-efficient than any of the hardcore off-roaders. If you're not going to be engaging in severe off-roading, but want more off-road capability than the typical crossover offers, it's the most practical choice. Overall reliability has been about average, but some people don't like how the transmission behaves and feels. If you find one used, it could be one traded by an owner who disliked the transmission enough to take a hit.

In the future, once used ones are available, the new Land Rover Discovery Sport could also be a contender. It's new, so we have no reliability data on it. Past compact Land Rovers haven't been as troublesome as the large ones. 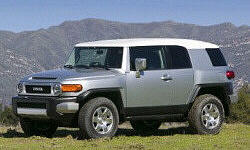