I'm looking for a car that is very safe with excellent MPG that can handle the super aggressive highway driving that is Chicago. Commuting 12 miles on local highways every day and doing 120 mile round trips into Indiana twice a month on highways there that can only be described as 18-wheeler-land. I'll need a car with solid passing power. Love hatches, but not wedded to them.

The current crop of contenders are the Chevy Volt, Prius, Prius Prime. Would be great to know if ther are others I'm missing.

What is the weight, horsepower, and torque of the vehicle you have now? Can you plug in a vehicle at your work place and home with the hybrids?

If narrowed down to hybrids I'd choose the quickest and the one with the best handling, that is the Volt. It easily out handles the Prius and will provide more passing power when you need it. But I think they are speed limited to around 100 mph, which is easily obtained in passing two or more 18-wheelers by the Volt

Skip the V6's for passing power and go right to turbo-4's. They provide over 40 mpg at cruise in the smallest 1.4T and close to 40 mpg in 2.0T guise. I like the Buick Verano 2.0T when traveling hours along I-80 as it is the quietest compact car you can buy along with one of the smother riding ones. I would see 37 mpg, two way average, at 70 mph for hours on end.

If you want AWD the Buick Regal is a little bigger than the Verano but just as quiet and smooth. The Buick Encore will also see almost 40 mpg at the speed l ok mit and offer better visibility sitting up higher than a sedan and AWD option.

If you want to go arounder Japanese V6's this side of a GT-R, just ecu tune a 2.0T to over 350 lb-ft of torque and you'll never look back.

Gassers don't get as many MPGs as hybrids. I drive a 2016 Prius Four, which is the current generation. When under hard acceleration in the Prius, the engine doesn't sound stressed, unlike my 2005 Prius. The Prius is a very reliable car, but the Volt has had some problems with it's engine, not much the electrical system. The Volt gets more range than the Prius Prime, has less controversial styling, and is faster. I find the Prius fast enough for highway use in, but going up a steep mountain is not what it's meant for. In stop and go SoCal traffic, I get around 70 MPG in my regular Prius. In mixed driving 70% highway I get 58 MPG driving pretty aggressively. When going over mountain passes and passing 18-wheelers, it's not fast but it doesn't make me nervous. The Prius is limited to 112 mph, 11 mph more than the Volt. I've gone 103 mph in my Prius when no traffic was around.

An added benefit to the Prius is that you get all the active safety features standard including blind spot moinotring. A cool feature is that the Prius can park itself. You only have to brake when it tells you and the steering wheel does the rest (it works suprisingly well). In the Prime you can get an almost-Tesla sized screen, which has mixed reviews (I like it). The Prime's pricing structure ends where the Volt's price starts at $34k without tax credits. When I drove and sat in the new Volt, I noticed that the interior and rear seat are MUCH smaller and cramped than my Prius. Regular Prius seats 5, Prius Prime and Volt seat 4 (Volt has an unusable 5th seat, Prime has 2 larger seats in the back). I thought the Volt and Prius/Prime drove pretty similar. Both pretty comfy rides and a small amount of road noise. The Volt was a little quicker off the line, but the engine didn't sound refined. Volt and Prius/Prime have the same safety ratings. Volt's price starts where the Prius and Prius Prime end, at $34k.

In the Prime, the trunk floor is raised by a couple inches and it seemed significantly smaller than my Prius in person. A good reason to go with the Prius is that Toyota has been making the Prius for 17 years and they have perfected their tried-and-true hybrid system. The switch from the EV to gas engine is almost undetectable, they have suppressed most of the engine noise, and the reliability is amazing. I have 250,000 original miles on my 2005 Prius and I've only replaced the battery once, the A/C compressor, and an inverter water pump as part of a free-fix recall.

So, if you don't need the huge trunk, go for the Prius Prime, which will give you around 22 miles of EV range. When you run out of range, you can change the driving mode into "regular Prius mode" in which you get 54 MPG and often more. 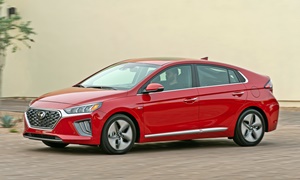 I would add the base VW GTI to your list. It has plenty of passing power, is quite comfortable for two, relatively comfortable for 4 assuming their are not large people - definitely better than volt - and fun to drive.