M235I: Superb driving vehicle, best in class. Do be sure to research all the pitfalls of run-flat tires though - the reason that I no longer own a BMW.

I have to ask what specifically you did not like about the run-flat tires. Yes, they have a terrible reputation (noisey, $$$, premature wear are easy to find vis Google).

And they would not be my first pick. My M5 doesn't have run-flats and it doesn't have a spare either. I have AAA for that.

It's just that I didn't appreciate being stuck in "No Place, Iowa" - waitng three days in a motel, for a replacement run-flat to be shipped in. Similar stories are legion among owners with vehicles equipped with fun flat tires. If you're on the road, sans spare, ala your M 5 and your tire is not repairable - a non run-flat tire is usually, pretty much, readily available. Run flats, not so much! From 1976 unitl 2012, I've owned six BMWs so I'm not adverse to them - other than the run-flats. We take many long road trips every year, and I just like the security of having that spare in the trunk and the easy accessibility to a replacement tire - should I need one.

I had an ATS-V for the last two days. Extremely capable car, but unless you live near some empty twisty roads or a track it will be difficult to exploit much of its potential. Also note that the base price is in the mid-60s, and options easily take it to or over 70k.

For typical daily driving I personally prefer the ATS with the turbo four. It feels considerably lighter, perhaps because it is. Plus it's far less expensive than the ATS-V.

If, on the other hand, you want the most intense driving experience, the second-gen CTS-V easily beats the ATS-V. It encourages bad behavior in a way few other cars I've ever driven have. Significantly more visceral than the ATS-V, especially the steering. Fuel economy is awful, though, if this is a consideration, low teens vs. high teens to low 20s in the ATS-V. Drive it hard, and mpg sinks below 10. It's the thirstiest car I've ever tested. But also among the most fun.

The 2 Series is my favorite among current BMWs. As with the ATS, though, I'd seriously consider whether the larger engine is worth the trade-off in handling (more weight in the nose), mpg, and purchase price. The 228i is quite quick. I do like how it feels more compact than the others (because it is). If you're willing to go CPO, the 1 Series can be even more enjoyable, if less refined (these often go together).

The Infiniti is pretty and quick, and probably also the most reliable, but its chassis is a couple generations behind the others and its ride and handling are not in the same league.

One wild card: if you don't need much of a back seat, the Audi TT RS (my review) vies with the Cadillac CTS-V and Mitsubishi EVO for the most fun car I've ever tested, while getting far better fuel economy than the Cadillac. Compared to a Porsche Cayman, handling is less dynamic, but it's much easier to have fun in typical daily driving owing to the immediacy with which the car responds. A surprisingly enjoyable car. 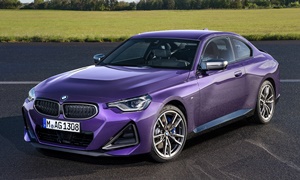 @mkaresh Hmm. I haven't reallly looked much at Audis. The local dealer is small and a TT RS would be a rare sight there. Nonetheless worth looking at since the BMW dealer is not going to cut me much of a deal on the M235i...I'm not going to pay them close to list (just got the quote) unless it's *exactly* what I want.

I like the EVO but they are just cop bait here. I get enough LEO interest with my M5 and my traffic lawyer has said that the majority of my tickets were given for what I was driving as much as how I was driving. I miss my Taurus SHO which was a stone hoot to drive and seemingly invisible to police.

Agree on the CTS-V. One of the sales managers I work with got one. The Recaro seats and the (yes, it's overused but hey) visceral feel of this car is impressive and seductive. Gas mileage honestly isn't much of an issue. I don't drive much in my own car (2000 M5) since my company demands I rent for most trips. The only long personal trips I do right now is a roughly 1,000 mile drive RT to visit my parents every two months or so.

Because of the long trips, car seats are so very important to me. I have chronic back problems and driving any distance is becoming more and more of an issue. The ATS-V is nice but you hit the issue on the head...I have reallly expensive tastes and tend to option out any new car I've looked at so it's likely I'd price myself out of a new ATS-V rather quickly. I'm still looking for a (used) CTS-V with Recaros though.

We've got some roads nearby that are worthy of an ATS-V. I have scoped them out with my M5, which gets a good hard workout about once a month. Eventually I'm planning on driving to LA to visit my son and we're going to take a drive up the PCH and some of the other west coast roads along the coast of CA. If I thought my M5 would survive the trip I'd take it instead. 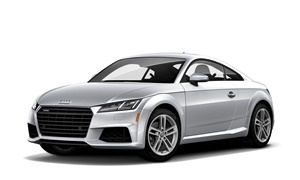 I wasn't suggesting the Evo, just mentioned it in a final edit since I'd listed two of the most fun cars I've reviewed.

An Evo would definitely attract cops. The CTS-V also will attract them just because it's unusually hard to drive the car at a legal speed. The TT RS, I don't know. Maybe they overlook it because most TTs are bought for their looks, not their performance. The RS is extremely quick, though. Its seats aren't highly adjustable, so they'll either work for you or they won't.

One possible advantage of the TT RS is that it is AWD, which is good if you want safe handling in all conditions. Especially good for an unfamiliar road. To lose control of one of these you really have to be doing something stupid.

I may be way off base, but if you're looking for seat comfort and sportiness - maybe an PO Audi S 6 that has the standard sport seats. If you can stand less sport - a PO Audi A 6 with the comfort seat option. The NEW A 6 has the comfort seat AND the individual contour seat option. Probably "missing the boat" by a lot, but the SWB A 8 drives much smaller that it is, and will still get you 0-60 mph in 5.4 seconds - with just the standard V-6 (V-8 and V-12 options are available); should realize about 22 mpg in town/suburbia and about 30 mpg with A/C at 70 mph, with standard V-6 (lose about one mpg with the V-8). Standard seats are superb and there are also the the comfort and comfort/sport options to boot. Need more "sport" - Audi S 8.