Passenger-seat accommodation for lower back problems in CRV - update 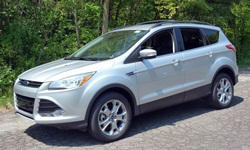 This member has purchased a 2015 Ford Escape.

Possible:
Looked at Ford Titanium - 10-way power adjustable front (both) seats with good height obtainable (15") pleased us. Tip-to-tip mirrors = 82" also good. Am concerned about reportedly bad reliability???; customer dissatification with dashboard electonics???
Comments
Any more ideas?
Thanks to those who have replied re Volvo (too big) and Lincoln.

i highly recommend the Lincoln MKC! Love mine! Most comfortable seats! 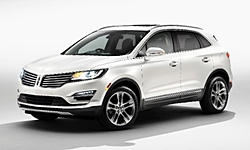 The volvo XC60. Volvo has the most comfortable seats in the business period. The only issue with the MKC is if you have long legs. The seats are a tad on the short side and it's a thigh support issue.

The XC60 is a couple inches wider than compact crossovers, but all but those with no options tend to have power-folding mirrors. Push a button, and the mirrors fold inwards. Might this fix the width issue?

The Acura RDX was only offered with a 4-way power passenger seat in 2015. For 2016 all but the base trim have an 8-way power passenger seat. I haven't driven the 2016, but didn't like how the 2015 drove nearly as well as the Lincoln MKC. More than a few owners of the 2013 and 2014 have reported driveline vibrations, so their reliability stats haven't been great. This issue might be fixed with the 2016.

Reliability for the 2013-2014 Ford Escape has been worse than average in our stats. We exclude software issues, so the problems extend beyond the MyFord Touch system. But they're rarely serious. No repairs have been reported for the 2015 yet, though, so it could be better.

The small amount of data on the Lincoln MKC suggests that it is experiencing some first-year glitches. A shame, as I really liked how it drove. 8-way power seats with power lumbar on both sides are an option.

Lexus recently introduced the NX compact crossover. 8-way power on both sides, but only the driver gets lumbar. I'm driving one this week, and will be reviewing it against the Lincoln MKC. Definitely worth a look.

Audi offers the Q5. 8-way power both sides, and a Luxury Package includes 4-way lumbar on the passenger side. Reliability has been good for the 2014 and 2015 with the gas engine, but not for earlier years.In general European cars probably aren't your best bet if you're likely to keep them for ten years.

That said, the Mercedes GLK has 8-way power seats with manual lumbar on both sides as standard equipment. The small amount of reliability data we have on these suggests that they are reliable for at least the first five years.

All of the luxury brand crossovers except the Lexus offer power-folding mirrors.

In general, it sounds like it's not easy to find a comfortable seat for your wife. So this should probably be a higher priority than reliability. If she finds one vehicle much more comfortable than the others, that's probably the one to get.

Note: something went wrong with the underlining in your post, so I removed it. You can add it back again with the edit function. If it turns out we have a bug that makes the problem happen again, please let me know. 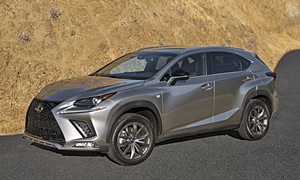 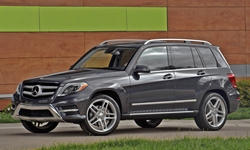 Thanks Michael and all for your guidance. My previous response must be floating somewhere in ether-space. Sorry for any omission on my part.
All of the cars inspected (others were eliminated form on-line specs) are in my original posting. The Ford Titanium 4WD with 301A package provides 10-way power driver and passenger seats, high seat-to-pan dimension, all leather seating to make pelvis positioning easy; as well, the mirrors tip-to-tip measurement (never posted by any manufacturer) comes in at 82" without having to fold in. All posted requirements met without having to go upscale to the Lincoln MKC. The "eco-boost" seems OK. So far the turbo hs never been needed. Ride OK. Trim fit good. Reliability reports appear better than for the SE (which would not have met our requirements). 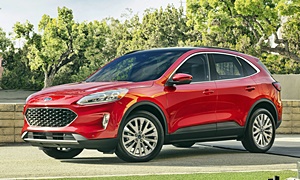 Good to hear you found a vehicle that met all of your requirements.

I think you also emailed me. Could am email be the "missing response" you're remembering?

On the car, the seats in the Escape are quite different from those in the MKC, and I wouldn't be surprised if many people actually preferred those in the Ford. The put good seats into even their least expensive cars.