I am considering buying a BMW x3 in either 2013 or 2014 model years. My main issues with the reviews on this car are: 1.the rear seat comfort given what those rear seat cushions look like in the pictures; 2. Front seat comfort for long trips; 3. Reliability and repair costs compared to uhh, more "tame" cars like the Toyota Highlander or Nissan Murano. This car will be my wife's daily driver for about town trips since we are retired. I will be the primary driver for trips. I would appreciate feedback on your experiences with this car regarding my priorities listed.

We don't have large enough sample sizes to estimate repair costs. But as a general rule, if you're concerned about repair costs you probably don't want to own a German car out of warranty. The current X3 has been reliable for its first two or three years, but the 2012s haven't been faring well for the past year and the 2013s are already heading in the same direction.

Seat comfort is very subjective, so there's no substitute for sitting in the car yourself.

Thanks for the info. I don't get it that the German auto manufacturers can't make a more reliable car. They have such a great reputation for handling, sportiness, and styling. Harrumph. I'm going to highly consider the Lexus 350 as well as the 2015 Murano.

Part of it is that the Germans are more willing to implement new technologies and new features before they've been tested to death. Toyota / Lexus has become almost ridiculously conservative. Until the new 2.0T engine was introduced in the NX, Lexus hadn't had a new volume engine since about 2007.

In the BMW line, the 2013-2015 X1 used relatively old technology, and it has been very reliable so far in our survey. Just three years old, of course, But also a few tight rear seat.

Depending on how much front seat and cargo space you need, the Infiniti QX50 might work for you. It gains three inches of rear legroom for 2016, eliminating one previous shortcoming. But it's also a very old design, largely unchanged since 2008, and is relatively narrow.

I haven't driven the new Lexus RX yet. The old one didn't handle well even in F Sport trim.

The Murano does strike me as better styled with similar performance for much less money. The previous generation has been reliable. The new CVT has had problems in past model years, but they should have these sorted out at this point. Time will tell.

I'll toss one more out there--the Kia Sorento SX-Limited. Low status brand, but a surprisingly good vehicle for what it costs. You'll find my full review in the menu beneath the photo.

I must say, it is tough to find a crossover that both handles well, has an upscale interior, and has a high probability of holding up well for a long time. 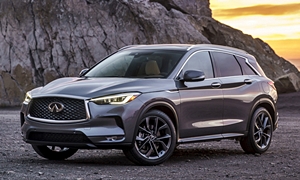 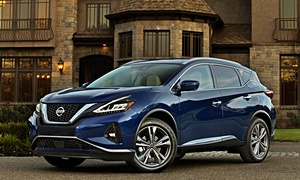