Which Kia Sorento to Buy?

Time to retire the 2003 Honda Odyssey minivan because repairs are getting expensive, our kids are getting older, and the oldest goes to college next year. Not quite ready to give up on the third row since we occassionally carpool and take road trips. I'd like to upgrade to AWD and a smaller, more stylish ride. Looking closely at Kia Sorentos and Nissan Rogues (though the latter is hard to find with 3 rows in my budget). Really hoping to spend only $10,000 but willing to spend up to $15,000. Which of the following two Kia Sorentos (both fully loaded with heated leather seats etc.) is the better bet? Specifically, should I be detered by 100K+ miles on the 2011?


Another possiblility is to use the down payment money to really fix up the minivan, have no car payment, and keep driving it. What other options are worth considering?

The 2011 Sorento's mileage wouldn't be a deal killer for me if it was in good condition and checked out by a mechanic. The mileage is rather high for the age, but that usually means the majority of miles driven were on the highway. Highway miles cause much less wear than city miles.

The 2012 concerns me for a couple of reasons. First of all, you didn't specify that it was a V6. If it has the standard 4-cylilnder, that would be a deal breaker for me. I've driven a few Sorentos with AWD and the 4-cylinder and it's simply not enough power for that size and weight of vehicle (especially with a full load of passengers). Having two owners in 4-5 years isn't always a bad thing, but I would take a closer look at the specifics. How long did each owner keep the vehicle? If the second owner quickly traded/sold the vehicle, I'd be concerned. Most of all, the accident concerns me because it happened so recently and you aren't certain of the severity. If a car is wrecked and traded shortly afterward, that's a bad sign! Personally, the vehicle's history is questionable enough to keep it off my list.

An alternative that you probably haven't considered is the Mazda CX-9. For $15k, you could get a 2010-2011 CX-9 Touring (or Grand Touring, if you're lucky) with reasonable miles and in good condition. The Touring model has standard leather seats and is basically loaded (power liftgate, moonroof and Bose audio system were options). I have a 2012 CX-9 Grand Touring FWD that I bought new in November 2012. It currently has 63k miles on it and I am still in love with it! It looks great, rides smoothly, handles far better than any mid-size/large crossover should and has plenty of power. Reliability appears to be good overall, with the front brakes (warped rotors, which I solved with $250 aftermarket high-performance rotors) are the main problem area. In general, my 2012 looks and feels more like it's one year old rather than almost four?.a great vehicle! At least take a test drive in one.

The question of whether to keep your 2003 Odyssey is one that only you (and possibly your mechanic) can answer. You mentioned that repairs are getting expensive. What repairs have been done and what (if any) current problems need to be fixed? How many miles are on it? Would you feel comfortable taking it on a 500-mile trip? Some people advocate driving them until the wheels fall off (literally and figuratively). That may make the most financial sense for a single person, but when you factor in a family, it's a different story. A 14-year old vehicle simply isn't going to be as safe as one that's 5-6 years old. There's also the risk of more and more repairs (things you never even think about can start breaking as you approach the 15-year mark). If you have a transmission failure, major electrical issues or engine trouble, it could easily cost $3-4k or more. Good luck and please let us know how it works out!

Most years, we take one 1,000 mile round trip during the winter, and I would feel still feel moderately comfortable using the minivan (which has < 70K miles) -- but only after repairing the broken A/C and some pricey maintenance and repairs. However, I'm not sure that I'd continue to feel comfortable with long winter road trips for much longer. So, keeping the minivan is now off the table.

I've looked at the Mazda CX-9 on and off (and even sat in one at a dealership) but the hitch is that I want something smaller and more fuel efficient than the Odyssey. Hence, I've been looking at Kia Sorentos and Nissan Rogues. Most of the carpooling we do is with petite teen girls for short distances, so the cramped third row is okay. As for road trips, perhaps we'd rent something bigger once a year. Or maybe the smallest of our three girls could stretch out in the back row. And after this year, we might only need to seat 4 for the long road trip since oldest DD will be going to college.

Re: the Sorentos, I had been thinking that the 4-cylinder would be better than V6 because of gas mileage so it's good to know that it's underpowered. Since the 2012 is I4 -- and was put up for sale shortly after the accident -- it's off the list.

The inventory of CX-9s seems better than the other two (esp. when restricted to 3 row, AWD, V6) so I'm going to take another look.

Again, thanks, and I'll keep you posted!

Just found an elusive three-row Toyota Rav4 (2011, 77K miles, no reported accidents) for $15K + $450 transfer fee b/c it's halfway across the country. Only apparant downside (besides cramped 3rd row) is 4 cylinders. Although it's not as stylish as the other cars under consideration, it has unparalleled reliability and safety records. Tempting...

The CX-9 is almost the same length, width and heigh as the Odyssey (exactly 1" shorter, 0.6" wider and 1.7" shorter). Because minivans use their boxy shape to maximize passenger space and the CX-9's stylish shape, the CX-9 has 139 cubic feet of interior space compared to 171 for the Odyssey. So it's just as big on the outside, but not as big on the inside. The 3rd row is pretty useful and I can actually climb back there myself (and I'm 6'2" and 245#)....but I wouldn't want to spend much time back there because of the legroom. It's best for passengers around 5'6" or less.

Regarding the Sorento 4cyl vs. V6- the unusual thing is that they get almost identical fuel economy in the real world. A certain consumer magazine (whose name I won't mention) tested the 2011 Sorento AWD 4cyl, 2012 Sorento AWD 4cyl and 2014 Sorento AWD V6. The V6 is much quicker than the 4cyl (0-60 in 7.6sec vs. 10.4sec) but all three had a combined 'real world' average of 20mpg. On paper, the 4cyl is rated 2-3mpg higher than the V6, but that isn't the reality. The 4cyl has to work a lot harder than the V6 (especially with several passengers on board) and that negates any fuel economy gain.

I actually like the previous generationRAV4 (2006-2012) a lot! If it has a flaw, it's the vast difference between the 2.5L 4cyl and 3.5L V6 in terms of power. The 4cyl also has a 4-speed automatic while the V6 has a 5-speed auto. The 5-speed auto paired with the 4cyl would have improved acceleration and fuel economy, but it never happened.

You didn't mention whether the 2011 you're considering is 2WD or AWD. I've driven a 4cyl 2WD and V6 AWD on several occasions (the 4cyl as a rental and the V6 belongs to a friend). The 2WD 4cyl wasn't a speed demon, but it was peppy enough that I never wished for more power or felt like it needed more. In the test stats I've seen, even the AWD 4cyl is more than adequate (and quicker than the Sorento 4cyl). The V6 is actually TOO powerful in FWD form and it's almost a hot rod with AWD. The 4cyl is rated at 179hp, which plenty for this size and class of vehicle, and the V6 adds another 90hp (for a total of 269hp) which was/is a lot of power for a smaller SUV. So I doubt that you would feel the need for more power than the 4cyl. But the real question is whether the 3rd row is realistic for your needs (and is there enough cargo space when the 3rd row is in use)???

I would suggest at least taking a test drive in a CX-9. Mazda did almost nothing to market the vehicle, so it didn't sell in huge numbers like some competitors. Sales peaked in 2011 at 34,421, with 28k sold in 2010 and 24k in 2012. While that was not great news for Mazda's bottom line, it makes them an excellent value as a used car. Mazda's dealer network is also one of the smallest in the U.S. That would concern me if it was still under warranty, but after the warranty expires it's a non-issue. The 273hp 3.7L V6 in the CX-9 is actually a Ford-designed (but Mazda built) engine. Ford used their version in everything from the F150 to the Mustang and Lincoln MKS. So most mechanics are familiar with it. Mazda wisely chose to use a 6-speed Aisin automatic transmission instead of the 6-speed that Ford co-developed with GM. The Aisin unit is much more responsive and reliabile.

Good luck and keep us posted!

Again, super helpful! Since we live in the Chicago area, I'm only considering AWD/4WD, and the aforementioned 2011 Toyota Rav4 is indeed AWD. I've heard that the 4- and 6-cylinder Rav4 real-life MPGs are very close -- as you say is also true of the Sorento. Good to know that the Rav4 AWD V6 is overpowered, esp. for teen drivers. So in summary, I'm looking for one of the following with AWD and a 3rd row:

Re: the Mazda CX-9, the more I think about it, the more set I am on a smaller car for city driving/parking. I initially sought a 5-seater (LOVED the Mazda CX-5 but it was out of budget -- and really only a 4-seater). Having realized that I still want the abiltiy to carpool for short distances, I'm quite set on a small three-row. Not going to worry too much about long road trips for now, though we can always use a roof rack for more cargo space.

Should I strike out on that plan, the Mazda CX-9 will be at the top of my list, though I'll probably also look at Highlanders and Pilots. Just wish Mazda made a cross between the CX-5 and the CX-9!

Now I just need some luck finding what I'm looking for. Inventory on 3-row small SUVs is low, and finding them involves digging through lots of listings that turn out to really have only 2 rows.

Look at the 07 - 13 Mitusbhi Outlander I had an 07 XLS which has a 3rd row - certianly not as compfortable as the sorento 3rd row but useful for the occational use. Look for the V6 with the 6 speed auto - it was a fun car. Unfortuantly the getting the V6 in later models requires getting the GT which holds it's value better than hte others. Look for a 2011 or 2012 to fit your needs. Reliability is very good on these models. 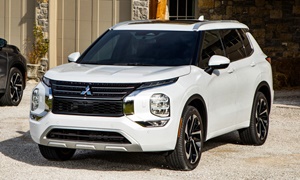