i want a bmw m2 convertible awd but they are not and might not be made .. not a bmw m235 or m240 not the same car... debating an audi tt rs convertible if it exists; convertible is the hard part

Jaguar F-Type convertible. It's a 380hp AWD beauty and likes a 100K car should. 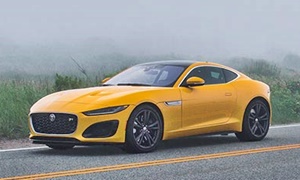 A very lightly used Audi R8 convertible. There is a black 2015 with 20k miles right now on Autotrader for $100k in Beverly Hills.

If you search for Audi/Convertible/AWD/100k max ceiling on AutoTrader, you'll see the others as well. I'd personally go for an older model to afford the 5.2 liter screaming in my ears, but it'd be hard to pass up a 2015 with the V8 since it's still under warranty.

Congrats on turning 60! Live it up man! 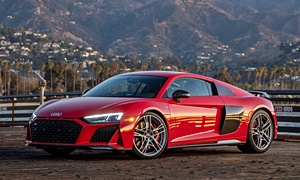 A Porsche would be my first choice. The 718 Boxter is now a really good car, but isn't available in AWD. If AWD isn't a necessity, you should really go for it.

They only make the Audi TT Roadster with the 2.0T now. They make the RS in a coupe form though.

Consider the Audi S5 Cabriolet. 0-60 in 4.8 secs with the 3.0T and is a more special feeling car than the TT. AWD is standard on all Audi's I believe.

The Mercedes E-Class has an AWD Convertible. 0-60 in 5.3 secs. I think it is more focused on luxury than handling.

The Jag is an awesome car, and also a nightmare with things breaking every day. 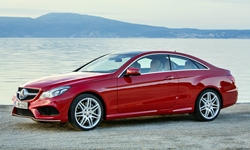 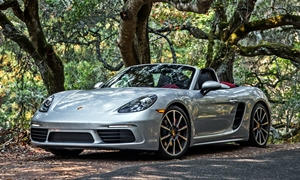 The Jag would be a good choice for a non-Porsche alternative and I would not be too worried about reliability. By all accounts, Jags have become much more reliable in recent years.

However, I would re-think the "new" requirement. Taking an example from Edmunds will show why. Edmunds estimates that a 2018 Jag convertible AWD will cost approx $96,368 and first year depreciation will be a whopping $23,743 which is over 40% of the estimated 5 year depreciation of $54,516!

At the very least, I'd recommend looking at one year old cars with low miles. I'm older like you and I would never buy a new premium car because of the amount of their depreciation in the first years of ownership.

If you would consider a year old car, then a Mercedes Benz AMG GT roadster might fall within your budget. I know I'd rather have that over a Jag F-Type convertible

no used cars; certified or not... my last one was certified 20k miles 2 yrs old..owner knew he was trading it in so bought cheap gas, missed service appts...i am too old for used cars..I current have a bmw 435, awd..nice car, does things okay but booooring..mercedes amg gt was a nice thought but $130,000 is hard to swallow...only audi tt i would buy is RS convertible.. coupe ... no.. so far mercedes was spot on except price..

thanks for the suggestions..

I don't really see how you can get a more exciting car than a 4 series convertible that fits your budget and necessary restrictions. The Audi S5 convertible comes to mind and is in your budget. The Porsche 911 Carrera 4 would be my top choice, but it is $110k and for some reason you don't want one. You could get a great used one or negotiate.

Porsches are way more special than a Mercedes, BMW, or Audi. More fun, too.

a 911 is a cliche for midlife etc etc.. My car is fine, I would like smaller, faster and a bit more sportscar like...I had my heart set on a bmw m2 conv w/ awd but suddenly not sure if it will be available in awd I live in winter hell and my last m3 was unuseable 3-4 months a year..The m2cs also might be convertible, might be awd but will be such limited production that unless i preorder an orange one, I might not be able to get one..

I a set of Dunlop M2 snow tires on my C5 Corvette. As long I was moving I could pop drifts and with my Dad in for extra would his up hill, twisted driveway as well as his Silverado would. Only time I got stuck was at work with a snow drift wrapped around the car and couldn't get enough speed to get through it and got stuck on top of the drift. That was the night I passed thr highway patrol a d got pulled over and ask what my hurry was? :) I got near home and nothing was plowed and couldn't get down my street. So I pulled into a plowed, gas station parking lot and put on a pair of Z-cable chains and plowed my way home.

But a couple of guys with Silverado and 4wd would leave at stoplight in the snow, by about 40 mph it was all over once weight of the transmission would shift rearward I would just leave them in a plume of snow!

I have a Saturn Sky now on Michelin Pilot Alpin but it is too stiff for snow and is a handfull with its shorter wheelbase.

i said winter hell unpaved winter road tons of trees that spells ice make it curvey and hilly i do not mess with chains etc etc my m3 got stuck and i mean serious stuck 3 times in a winter.. my 435 is fine w/ 18" tires..sooo awd it is

I would second Piquigs's suggestion of the Audi R8 Spyder. The last generation R8 (stopped MY 2014-15) would be in your price range (V8 version) with very low miles and it is AWD.That would be a sweet ride. Also, beginning in MY2014, the car was offered with a dual clutch transmission which is reportedly a big improvement over the R-tronic transmission in earlier models. The car came standard with a manual transmisison, but they would be harder to find and probably more expensive.

I bought a 3 yr old TT RS and have had one issue in 3 and a half years of ownership: one of the shocks that hold the rear hatch open failed. That was fixed under warranty. Everything else has been routine maintenance and maintenance costs with an independent mechanic have been reasonable.

I am intrigued by the TT RS but insist on the convertible.. Am glad to finally hear a person who owned and drove it; all I see are models w/ little miles..
A shame the Boxster is not awd...Not the same stigma as a 911
Have owned BMWs dating back to '99 VERY Happy with cars until recently...Bought an extended policy for the first time and both repairs were not covered.. I really question the company's ethics...In my mind they are up there w/ VW

How about this convertible?

IMHO, the TT RS has rarely been given its due by the automotive press. One of the exceptions is Michael Karesh's review which can be found at TheTruthAboutCars.com. Our winters here in the DC area are generally not that bad, but I do drive the car thru the Winter. In more extreme conditions, I would own a second set of wheels with winter tires.

The TT RS is one of the few cars that is actually engaging to drive at any speed. This point was driven home as I have thought about replacing the car and there are hardly any cars that fit my needs as well as this car. My requirements are that the car has to be fun to drive at any speed, there needs to be space to easily store a golf bag without using the passenger seat for such purpose, and probably needs to be a manual transmission.

If I needed AWD, I would personally go with the 911 4, but I would consider the Jag F-Type, Audi S5, and MB E450. The MB AMG GT is way too stiff for my taste for a daily driver. My brother in law has a 2018 Mercedes S550 Cabrio and he loves it even coming out of a 2015 Porsche Cayenne GTS. It doesn't have AWD, but many people say the E Class drives like a baby S Class. The interior of the Mercedes' are beautiful.

Everyone that does instrumented testing says that winter tires are more effective than AWD. You don't leave the winter tires on all the time; only when it snows.

This is getting a little off topic, but I think the 911 got the reputation as an "old man with money" car stems from Porsche embracing the concept that a sports car should ride like a Camcord until it is pushed or a button is pressed. Porsche is hardly alone in this regard.

Now I'm not suggesting that the exhaust needs to be deafening or the suspension needs to rattle my teeth, but I AM of the opinion that a sports car/super car should always let me know what I paid all my money for. In my TT, the exhaust is just loud enough, the controls analogue enough (particularly the manual) so that the car would never be confused with something more mundane. There is no setting which would allow the car to do a Camcord imitation.

Personally, I applaud MB for making a car with old school style and character, even if it limits its daily use ability. If I were to replace my TT, a used GT S would be on my test drive list for just this reason.

just by the fact that I insist on awd not snowtires... awd I never even mentioned corvette which to be honest.. not my type of car...I am going to a large BMW dealer to see what the chances of getting an m2cs awd convertible are.. if not, I might have to suck it up and get a porsche..

The chances of an M2 with AWD in this generation are zero. The new M5 is the first non-SUV M car with AWD. The next M2 / M3 / M4 MIGHT have it, but this isn't even a rumor yet.

I personally find the M3 and M4 boring in anything short of extreme driving, which typically must be done on a track. The M2 is FAR more fun to drive. The S5 is also too large and heavy as far as I'm concerned.

In the same class, but not yet mentioned, is the Mercedes-AMG C43 convertible. Performance and driving experience should be in the same ballpark as the 440i and S5, but possibly worth a look.

Unless that somehow does the trick, it sounds like your options are Jaguar (which isn't exactly light, but is more engaging than a 435 or S5) or 911.

I competely agree with Michael, it comes down to if you want driving engagement or comfort. The Mercedes' are about comfort. The BMW and Audi seem a little too sterile and common for me if I wanted to spend $100k. The 911 has racing pedigree and a great history. The Jaguar is beautiful and pure. My family has owned many Jaguars in the past and all of them had powertrain and electrical problems, but they kept buying them because of the comfort and design. Admittedly, the last time they bought one was 13+ years ago, so hopefully they have changed.