I need an SUV that is 4WD or AWD, heated front seats, decent enough gas mileage and reliable. I'm looking for used vehicles, I've had very bad luck with cars so I'd like a vehicle that I can trust to run for the next 10 years. It looks like the Ford Explorer will get me more of what I want in a newer model year for the money, but the 4Runner is more reliable over all...any insights?????

The 4runner may need less repairs but they will cost more than the higher selling Explorer due the economies of sales. I like the 2.0T or 3.5TT Ecoboost engines for their low rpm throttle tip in torque and very good mileage if you watch your speeds. The Toyota 2.7l 4-cylinder is really old today where the Ford Ecoboost has direct injection fueling and variable valve timing along with turbocharging for the best performance. 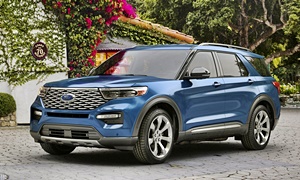 What NormT said is true. The 4Runner is one of the lowest depreciating cars on the road, but what money you lose in the beginning will be made up because these cars are unkillable. It is one of the best performing SUVs off-road. 4Runners easily can drive past 300k miles with normal maintenance. Buying a 4Runner with the tried-and-true 4.0L V6 is a must because the 4 cylinder is just too slow with minimal MPG gain.

The Ford has all the engine tech that will give you better performance, but will not be reliable after 8 or so years. The engine in the Explorer is actually unreliable, with the turbo needing meticulous maintenance and eventually failing. Also, there is a design issue where exhaust fumes leak into the cabin which is not a good thing (it almost killed someone). Honestly, you would be lucky to get 5 years without some type of problem with this car.

Unless you are going to be doing heavy duty off roading or go through very harsh winters, the 2013-2017 Toyota RAV4 AWD will suit you best. It gets the best MPGs of the others, is more comfortable than the 4Runner, and is as reliable than the 4Runner. It will still drive well in snow or a steepish dirt hill. It is easier to park and live with and would be the one I would buy between the three. You could get a higher mileage 2016 RAV4 LE/XLE, but I would not go older than 2013 because that was the big redesign year.

Toyota has not been perfect in introducing oil change interval and oil life monitor programming. Like Subaru they thought they could extend oil life switching to synthetic but owners have suffered scored bearings and burnt oil pumps. The failures are so common they started a poll on it.

Not to say a turbo-4 in a 4,000 lbs Explorer is perfect but mich has been made on critiquing oil life monitoring and change intervals. Turbocharged engines have always been over built compared to normally aspirated engines to handle higher torque loads and heat stress. That is why you see Saab and Volvo turbos lasting over 300,000 miles with little other than maintence. The turbocharger is the most sentiment part as it has to spin close to 200,000 rpms. But the good news is the turbo rebuild kits are are $50.00 or less.

With good maintence most engines will last today for a long time.

That was only a guy asking if anyone had problems with their Tacoma engines on a Tacoma forum. Explorer turbo rebuilds are $550 from Rockauto without labor. You could say most engines are good today, but Ford and especially FCA are notorious for engine and transmission problems. Some German cars, too. Saabs and Volvos very rarely last past 250k miles. I've never even heard of one with that many miles on it.

Here are just a couple of hundred Saab's that over 250,000 miles and allot of them have 300,000 miles. This does not include the Volvo list which is just as long or longer.

The turbocharged engine is over engineered and built to handle the stresses of increased torque that they put out over normally aspirated engines. So if they are maintained and not abused they will basically run forever or until the car chassis rusts away.