Currently driving Elantra touring 2011 - would like to replace with simular spec vehicle.

Would you consider a small CUV? They generally have chairlike, upright seating positions, good rear legroom, good cargo room, and fuel economy is good. Possibly a Honda HR-V or CR-V, or Toyota RAV4. 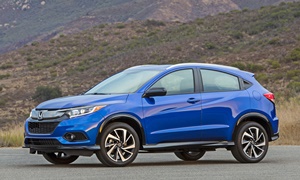 Here is the thing. 99% of SUVs - big little compact whatever - do NOT WORK with dogs. Those things are 34-36" from the ground into the cargo space.

Might as well ask the dog to jump up onto your kitchen counter as to jump up into the SUV.

THe lowest of all the crossover/SUVs are Honda CR-V (28 inches in through the door onto cargo area folded flat and 24" in through the tailgate) Accura RDX (28" in) and Outback (28" in through door and tailgate) ....maybe the Toyota Rav-4 (haven't gotten around to measuring it)

That is it on the crossover/Suvs that might maybe sort of kinda can work with medium and small dogs and elderly large dogs.

Based upon talking to mechanics and the parts departments of the dealers, we have ruled out"


* Any so-called "wagon" that has less than 66 cu ft with the seat down and the size we have now (and barely enough as it is.) That means no Audi, BMW, Cadillac, Mini or Mazda etc.


* Subaru -- mechanics dream if their customer is dumb enough to buy one. Blasted things want a head gasket & timing belt every 75,000 miles (We keep cars until they die.) My current model of cars - total of over 1,000,000 on the various cars we have owned until they quit- NEVER needed a $2500 head gasket! Never needed more than $2000-2400 in extraordinary repairs in as much as 23 years.

* Prius V - horrible layout inside as you can't see what is outside the right rear quarter panel except by mirrors. No way will I have a touch screenthat controls the heat & AC. That is a $3000-3500 computer monitor + 2 days in the dealer to replaced and not bloodly likely to last over 75K - a $4500 -5000 repair several times during the life of the car. Ditto the hybrid batteries which routinely fail around 100K+ and are a $5400 repair. ANd they like suck in snow.

We will probably have to track down a low miles Acura TSX wagon. They were made between 2011-2014.

Back up alternatives would be the Honda CR-V and Acura RDX. Not that much higher from the ground and maybe I could figure out how to (a) help elderly dogs in who outweigh me and whose torso is bigger than mine and (b) add running boards or something so the younger dogs have an extra step to help them get up and in. They also run forever - easily can hit 300,000 miles - have low maintenance and repairs, the body holds up and I can get themwithout that #$%@ touch screen controllingeverything.

If you don't plan on keeping a car after the warranty ends, then maybe you would be okay with a Subaru or VW

I disagree about eabpmn about the Prius V. I own a 2005 Prius with 245k miles and I've never replaced the battery. I even have a 2016 Prius Four and love it.

Look at a 2017 Prius V Four or a top of the line Five if you can get the price down by $1k. It has a bulletproof powertrain, unbeatable fuel economy for a wagon, and has tons of space in the back. Prii don't do well in the snow though. If I recall, the seats are upright and the V has OK visibility (better than the regular Prius).

A Subaru Outback would also be a good choice because of the higher ride height and better off road capability. It's much more expensive though and you can get a nicely equipped Prius V in your budget. 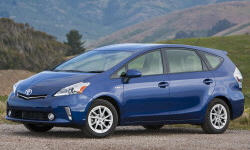 My info on the frequency of repairs (touch screen & batteries) came directly from the head of the service department of the Toyota dealer.

In fact when I ask about the repairs needed by a Prius, the frequency and the cost, he laughed and said "Prius? I'll be your new best friend and see a lot of you after it hits 4 years old."

I menitoned to him that I had read that Prius batteries had lasted to 300,000 miles. He said "If it was used as a taxi and the miles run up in the first 3 or so year or maybe just maybe if you get very very lucky"

Dogs need an air source as they control their body temperature through their breathing. So a vehicle with at least 2-row cooling would be good. A 3 -row with it's own climate control would be the best. I can control the 2nd row from the front Intelilink on our 2016 Buick Envsision. The tri-zone is available on used models just under $30,000.

For shorter trips I'd look at a 2009 and later Buick LaCrosse or a 2013 and later XTS for seating of five and a nice pair a vents blowing into the rear seat should be under $30K.