Fast, luxury 4-door hatchback or sedan for my best and last-ever car in the U.S.

I'm looking for my dream car -- fast (preferably 0-60 in under 5 secs) luxurious, beautiful, loaded with the latest technology, and able to transport 4 or 5 people as well as their luggage in style and comfort. It should also have all-wheel drive for traction and performance, and all the safety and convenience options (except maybe an overpriced sound system). I would prefer not to get another Japanese car, especially not a Lexus or an Infiniti, which I have owned before. I just got my wife an Audi A6 Quattro 3.0 Prestige, which is fantastic, but a little too big and dull-looking. Therefore I am considering 4-door luxury hatchbacks like the BMW 440i Gran Coupe X-drive (about $65k well-equipped), the 2018 Audi S5 Sportback, and also the AMG C43 Sedan. Other less-costly possibilities: 2018 Kia Stinger, 2018 Buick GS Sportback, and the Audi A5. (I tried the Jaguar XE, thinking I might get the XE-S, but rear visibility, passenger and cargo space were poor. The XF is a little dated, big, and slow.) This may be the last and best car I ever buy. I'm only in my mid-fifties but planning to move overseas and retire in a few years to a place I won't want a car.

On Sunday, I test drove the 2018 Kia Stinger at the LA Auto Show. It was so good, I compared it to my dad's Porsche Panamera (I learned that Kia also compares it to the Panamera, which is a bold statement). Very fast and fun, comfortable on crappy LA roads, and had a very high quality premium interior. It had a decent amount of space in the trunk like a Panamera. Don't have seconds thoughts because it is a Kia; they are making some really good cars now. The Kia will have, by far, the lowest maintenance costs comparing to the luxury brands. Journalists have been raving about it, and before you buy a car, you have to drive one. Kia has recently had a great reliability history, better than the German brands.

I haven't driven the MB, BMW, or Audi A5, but I prefer the A5 just because I've heard it is a better value and a better overall car. Plus, it looks sleek, especially for a four-door sportback. The interior is not as good as the Stinger after sitting in both.

I don't blame you for not buying a Jag, as their cars are not that competitive. I've owned one and my parents have owned many. They used to be more competitive.

The 2018 Buick Regal Sportback will obviously be the cheapest car on your list, and it'sperformance reflects that. I'm not saying it is a bad car, but you can't compare it to the other cars on the list. It is more of a luxury car than a sporty coupe like you sound like you want. It has a ride that is tuned more towards comfort than sport. IMO, it looks like a smaller Chevy Malibu in the rear quarters. On the bright side, the price of the base Buick is the same as a base Toyota Prius (a GS is $39k, which is like paying $39k for an upscale Malibu). Therefore, the interior will be more like a $28k Toyota Camry than an Audi or Kia Stinger. It has the same V6 engine as the Chevy Traverse and GMC Acadia family SUVs, engines tuned for efficiency, not responsiveness. It might make more financial sense if you buy a cheaper car or a used car since you won't be using this car for long. These cars depreciate quickly. Good luck!

Now I'm guessing NormT will say the Buick is better than all the other cars... I can read his mind.

LectroFuel, I really appreciate your excellent and quick feedback! Now I obviously need to test-drive the Kia Stinger. It sounds impressive. Your other comments are also very helpful.

I would be a bit sorry to abandon the BMW 440i, which seems so beautiful and promising (but expensive). Although it's slightly outpaced by the Audi S5 and the AMG C43 in 0-60mph (4.4 sec), its 5-60mph passing speed (5.0sec), which may be more useful in ordinary driving, is 0.8 seconds faster than the Audi S5, according to C&D tests.

At well under $40K used and at about 4.5s to 60 mph the CTS Vsport will provide the sporty driving character in a slight smaller car than your A6.

If you can find one, a Certified 2014-15 E63 (or E63S) AMG Mercedes would be a good choice. Mercedes has a wonderful certified used car warrantee with unlimited mileage and an extended OEM warrantee is also available. I own a 2014 E63S wagon and can tell you that it has been trouble free and a ball to drive (who can't love a car that does 0-60 in 3.4 seconds and holds 5 people). The 2014 and later E63's are AWD and very luxurious. The sedan tends to be a bit less expensive than the wagon but both should be available within your parameters. The only issue you may find (if you live in a snow state) is that the car rides quite low and the front air dam could plow snow if it exceeds 6-7 inches.

The CTS-V is outdated compared to the other mentions and is not available with AWD like the OP wants. $86k for a GM branded car that has the same interior as the $45k CTS 2.0T? No thank you! The Kia handles better and has a nicer interior for only $51k fully loaded. The Stinger is only a second slower 0-60 and gets 19/25 mpg while the CTS-V gets 14/21 mpg. The Stinger has almost twice the cargo space, more rear seat hip room, and significantly more front and rear leg room than the Cadillac.

I forgot to ask if you had considered the Tesla Model S. You could get a really fast used one and not pay anything for gas. Reliability hasn't been great, but you won't be keeping the car for long. Most of them are AWD. Tesla is a great company too, unlike any other brand. They have much longer EV ranges than any economy EV. It's in my personal "top 5 cars ever made" list. I agree with richardaz on the Mercedes. The wagon was so underrated as are all wagons today.

I wouldn't worry too much about 0-60 times, as it matters what the passengers feel, like the neck-snapping 0-60 in 2.5 seconds of the Tesla. I'm not a huge fan of BMW, but I know it's a good car. I just prefer the others. The AWD system of the Audi helps with the 0-60 times more than the 5-60 mph times as the tires usually have grip at 5 mph. These cars are more about personal preference as there are MB, BMW, and Audi fans. I'm an Audi fan. 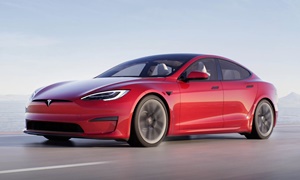 Eletrofuel, sometimes your opinion on cars on the opposite side of the driving spectrum shows that you own multiple Toyota hybrids. Or maybe it is too much wildfire smoke in California and need a breath of fresh air?

How are my opinions the opposite of the driving spectrum and show I have two Prii? I thought the stuff I said was pretty logical and true and I never suggested a Japanese car. I haven't smelled or seen any smoke in Orange County this week. It's in the 3-4 counties around OC and the ocean breeze is pushing the smoke inland, thankfully. 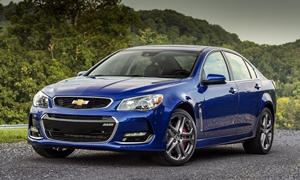