First time poster. Had my 2007 Honda Accord of 10 years (which I bought new) totalled by a impaired driver over the weekend. Ever since I have been obsessing over what will replace my baby, i bought that car when I was 19 and have not had to repair ANYTHING beyond the usual maintenance items like brakes,tires,tranny flush etc. I've debated everything from new to used to purchase to lease. I think ultimately I will go used, unless I can find something extremely attractive in the new arena. Most of my KM's are highway, so I really love some of the new tech like Adaptive cruise.

BUDGET : In the new Arena, I will not go over 32K, in the Used, My max is 15K. - However I am shy of the new since the depreciation is so steep, So I would prefer a car that holds its value.

Non Negotiables:
HIGHLY RELIABLE ( We are a one car couple)
HID or LED lights.
Leather Heated seats.
Folding rear seats.
Backup Camera.
Not smaller than the Accord.

Nice to have's ( in order of priority):

"Ski pocket" ( Center of rear seat opens to allow skis to fit in the trunk")
Adaptive Cruise.
Blind spot detection
Lane Keep assist.
I prefer Asian make vehicles, but I realize lots has changed since I last purchased in 2006. So everything is on the table.


What I've looked at so far ( in order of likelihood to buy):

Hyundai Sonata - very nice car, I LOVE it! but the depreciation scares me if I need to sell in a few years. Also the powertrain on the GDi 2.4 does not seem to be as solid as the Honda Engines seems many of the 2011-13 had Engine seizures.

Honda Accord - Unfortunately, if you visit carcomplaints.com it apprears the 08-current models have super uncomforatable seats and burn oil from the factory floor. So I am gun shy on a new accord. The dealer is letting me do a overnight test.

Mitsubishi RVR - featurelesscar, seemed like you dont get lots for the money, but great warranty.

You should consider a Camry SE and the Mazda 6 in your choices ...

Tnanks for posting such a detailed spec. I wish more were like this.

My guess: you'll likely end up with another Honda Accord. For what you're looking for, it's hard to beat.

I would not read too much into carcomplaints.com beyond "these are problems that at least a small percentage of people are experiencing." Honda sells about 400,000 Accords every year. If even one percent of these cars has a problem, you'll find a large number of reports of it. Carcomplaints does not have a structured survey process like we do, so it's not possible to determine from their data how common a problem actually is. Once there are a few reports of a problem these can appear in search engine results, where other people find it and also post, snowballing.

In general it's rare for even a very common problem to affect more than 20 percent of all cars.

On seat comfort, Hondas do receive more complaints here than other makes. I don't like the seats in many of their cars. But impressions will vary based on the shape and size of one's body, as well as one's personal preferences. There really isn't a way to evaluate a seat without sitting in it for as long as possible yourself.

On the Sonata and Optima: the latest versions (2015 and up for the Sonata, 2016 and up for the Optima) drive much better than the previous generation. They are deeply discounted when new and depreciate quickly, so good budget buys. If you hold a car for over ten years, depreciation isn't as big a factor. These designs are far too recent to know how they'll hold up at an advanced age.

The Camry SE suggested above is a strong contender for anyone who puts a high priority on extreme reliability. Whenever someone tells me they want a car to be highly reliable for ten-plus years, I tend to limit my suggestions to Toyotas and Hondas (and not all of these).

The Mazda6 is a sportier alternative to the others that might prove reliable long-term. The current design is only three years old, so it's hard to say at this point. Not as sure a bet as a Camry or an Accord. Could be deeply discounted, though, as these haven't been selling well. The 2016 was updated to make it quieter and somewhat more luxurious, but mechanically remained much the same as the 2014-2015, so no changes that should harm reliability.

Finally, the Subaru Legacy could be a good fit for what you're looking for. AWD and a thorough safety tech package are bonuses. Reliability is somewhat uncertain beyond seven years of age, but these do have a longer record than that of the Mazda6, going back to the 2010 model year. The 2010 and up Legacy has so far been much more reliable than the 2005-2009 Legacy. Oil consumption could be a higher possibility than with the Accord, as there have been many reports, but I think only for cars through the 2013 model year (which IIRC is the first year the Legacy had the new, high-efficiency engine; the Forester got it in 2011 and the Impreza in 2012).

As much as I wish there was a non-Asian sedan I could confidently recommend for ultra-long-term reliability, there isn't. 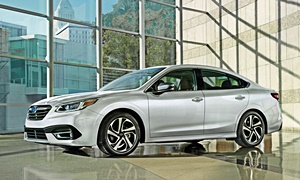 I'd look at the 2009+ Buick LaCrosse for around $15,000. My Mom picked up a CXL 2.4l for $14,000 with low miles. I know this is a Lexus ES350 competitor and in comparisons the Lexus looses, but the LaCrosse offer the smaller 4-cylinder with amenities standard that run up the cost of the smalker, entry sedans. The Buick will have a nicer ride and the seats will be almost Lazy-boy.