Got thru college Gotta Go Work!

What SUV would you recommend and why? The makes/models of a few currently being considered are listed at the bottom of this posting? My daughter will finish College soon and wants a good car to start the next stage of her life. She is a hard worker, an adventurer and would like a dependable vehicle to begin that maiden voyage of life, love, family, work, freedom, fun, travel & independence. She has worked since 15 yrs old, purchased her own 1st, 2nd, 3rd & 4th cars but has not had the best of luck finding the right one that is everything she needs & does not break the bank with excessive random breakdowns/repairs. So far she's owned a VW Bug, Mini-Cooper, Ford Focus, & Convertible Mustang. She is thinking that anSUV would be the perfect car for her. She likes the Subaru Models: Forester, Outback, & Crosstrek. Also the Jeep Compass, Ford Escape, Chevy Trax & Toyota Rav4. Can anyone tell us of any experience, knowlege, pros or cons of any of these? Any certain models or years that are known for longevity and reliability with the proper maintenance & care? She is prepared to spend up to $10,000 for a vehicle that is no more than than 10 years old & will hopefully last another 10 years. Thank you in advance for any advise you can lend! 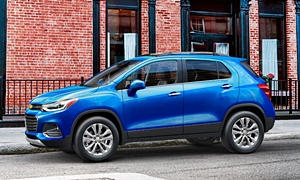 What a joke, Norm! 3 year/36k mile warranty, give me a break. That is tied for the worst warranty in the industry. The Trax is a bad car in terms of driving refinement, enjoyability, fun, comfort, and value. No person under 40 would want a Buick either. Don't trust NormT as he only buys from GM.

The cars that your daughter had were not known for having good reliability, so if you take our advice you'll almost certainly buy a good car. Going off what you are considering, I would only buy a Subaru if you live in the snow. AWD is standard on all their cars and their cars charge a premium for that. More importantly, many Subarus have excessive oil consumption, which can lead to a blown engine (head gaskets, too). For these reasons, I wouldn't buy a Subaru. Completely avoid any Jeep, Dodge, Chrysler, and Fiat. Although NormT will tell you the two Ford Escapes in his family are good, it has had below average reliability for a long time now (transmission, engine problems). The Chevy Trax, as I said, is a cheap car that looks fun at first (like a Bug), but isn't. It just doesn't drive well, but reliability has been OK.

The last one was the only good car on your list: the RAV4. It isn't an exciting car, but it is one of the most reliable SUVs on the market (Toyotas are the most reliable in almost every segment they compete in). Only get the 2009 and newer ones because 2008 and older burned oil. The 2WD and AWD 4 cylinder got 24 MPG. The much-faster V6 got 22.

The CR-V and RAV4 were both good cars at the time, but the RAV4 had the spare tire on the trunk that I hated. It blocks rear visibility and is ugly IMO. The RAV4 is just a little more reliable and got 2 MPG better.

The Mazda CX-5 was another reliable SUV that was fun to drive. It is loud inside and not as comfortable as the CR-V and RAV4 especially, but if you value fun and style test drive a 2013. These will be $10,000 and up. The 2WD got 28 MPG with the auto and 29 with the manual. Very efficient.

The Kia Soul is another one you should definitely check out. It is a lot of car for the price. It doesn't ride as well as the RAV4 and is pretty slow, but it has a lot of cargo space. Every year has been reliable, but consider that you can get a well equipped 2013 (old model) or a less-equipped 2014 (newer model). MPG is 26-27 for either engine.

Get something that has Stability Control (ESC). Some other cars you should avoid are the VW Tiguan and Nissan Rogue.

Electrofuel, your recommendations do not offer a warranty and to purchase warranty for up to 8 year old car and not financially feasible. The vehicles I recommend have a warranry and are newer and also cost less in many instances.

A new car could be leased and could lower the payment even more as it is a new car. If you are carrying full coverage insurance on a new car, why waste on older, outdated, and less safe one?

I will just focus on what you asked - above is fairly accurate for the most part. Here is more details.

Forester, Outback, & Crosstrek. Subaru uses the cylinder on the side and not in the V pattern of most automakers, also called the "H" engine design. That is what Lectrofuel is referring to. Subaru's are reliable these days. However, having said that, the engine burning oil is a true issue. It is also true about Porche because they use the same engine design!

My parents and I have bought Subarus for a long time. Back in 2003 my parents bought their first, a Forrester. It ran great, and was turbocharged. Never had an issue except it did eventually burn oil at 80,000 miles. They sold it at 100,000 with no other problem and added oil as needed.

My dad also bought a Forrester, a 2004. It never burned oil and went 140,000 miles with no problems. In the case of both Forresters, in 2014 and in 2015 (after 11 years on each car) they turned around and bought two more Subarus - both Outbacks this time. One after four years is fine, and the three year old one burns oil.

This matches up to this website and Consumer Reports. Subarus are generally reliable (the head gasket problem appeared on some cars, not all, and oil burning impacts about 10-15% of the cars in Consumer Reports surveys). They drive well and otherwise are fine. The question is, will your daughter monitor the oil and take care of it? If the answer is yes, the Subaru wil be very reliable. If not, steer clear.

Jeep Compass - it is a Chrysler, and their reliablity for the most part is terrible. That model in particular is very troublesome. Steer clear - Consumer Reports is very clear on that model's reliability.

Chevy Trax is made from GM South Korea, which adopted six sigma fairly well in that division back in the early 2000s. All the cars coming out of South Korea for GM are pretty reliable (includes the Encore, Trax, Sonic, and a couple of others). All I can say about that one is test drive it. It does not drive as well as the Subaru, but does not have the oil issues you mention. I am not gung ho about GM as Norm T is but I did work with them to improve their quality back in the early 2000s so I know a little about them and actually own a 12 year old Saab 9-3 that is pretty reliable with 168,000 miles I bought new, so they can and do make some good cars (not all of them). This is one of them, so take it for a test drive.

Ford Escape according to Consumer Reports has above average reliablity. Prior to 2013 they were not that great and in that case I do agree with Lectrofuel, with the 2013 redesign they are better now. No more engine and transmission issues. Those problems were fixed, and were fine from 2014 later (first year reliablity of redesigns should be avoided, I don't care what brand you are considering - even Toyota). The Escape's biggest problems are squeaks while driving and some have trouble with their electronics (hard to operate). Again, test drive this car to see if you are okay with the interface - some complain about it. Many like its performance on the road (fairly fun to drive).

Last is the Toyota Rav4. That one is a little tricky becuase it was just redesigned in 2016. In that first year (as I mentioned, first year reliablity should be avoided) there are a higher report of problems with the power equipment and electronics. If you skip that year and focus on 2014-2015 and 2017 you will be okay. The reliablity here is not Toyota's best model but it is still very good. Not a very exciting car to drive but if she likes it and can find one in her price range, a very good choice.

I know the others gave you decent advise regarding other cars so I will avoid going into that. Just wanted to give you and overview on the cars you thought might fit. Some are good, some have issues, others you should avoid. Best of luck with your decision.

My wife had a 2009 Legacy before thr Forester and cracked that winshield too.

I like turbo-4 and tune ability GM Ecotec was the next step after Saab demise. I have a Saturn Sky 2 4l with Hahn Racecraft turbo with 350 hp and 400 trq....quite a hoot. The GM stuff is impressive with power, features, and price as I buy almost one car annually.