My family is growing from three to four in April and my Honda Civic has grown too small for our needs. I am looking for a used family vehicle that can serve us for the next four or five year. It must have room for two car seats and a booster seat across the back as we will likely have a third child while we own the vehicle. Part of the problem with the Civic is that we cannot put a car seat behind the driver without pushing the driver into the steering wheel. It needs to have room for a small/medium dog cage in the back plus luggage. My wife will use the vehicle for errands and it will serve as our primary travel vehicle to visit out of town family. Cruise control is a must. I want to minimize post-purchase costs. I want a low-maintence vehicle with a low occurrence of expensive drivetrain issues. I want 20 mpg or better in the city. We started researching wagons, but I haven't liked the results. I do not want a European import because parts and repairs tend to be more expensive . The Ford Taurus wagon fits a lot of our needs, but they're ugly and mind-numbingly boring. I liked the Toyota Matrix/Pontiac Vibe but they're just too small. The Subaru Impreza/Outback seems hit or miss from owner to owner and model to model and I'm not sure what to think. I've expanded my search into crossover SUVs and like what I have read of the Ford Escape and Toyota Rav4 so far. What should I know about these vehicles and what other wagons/SUVs have I missed that I should look into?

HHR is quite roomy in the rear seat area for car seat. 220K on ours with cam chain guide being only drivetrain failure.

'01 or newer Highlander would be a good choice. Try to find one with the 2.4L forr better fuel economy (and no timing belt to worry about).

'04-06 Toyota Sienna gets good fuel economy and would be a very safe option.

I'm personally a wagon fan myself (drive an Audi A4) but lean toward the smaller ones (only 1 child in our family plus a large dog) and normally recommend vehicles that wouldn't fit your needs for the 3rd child. I have however tossed out the suggestion of the "non" minivan from time to time, the Mazda5. Unfortunately the older models have limited data in the reliaility and don't do much better than average (or worse).

There's also the Mazda6 wagon which is probably a little harder to find. I looked at one before buying by Audi and found it decent but didn't have the AWD I wanted as an avid skiier.

I can't say I have any direct experience with either, but cars.com lists a few of each on an national search that meet your price and milage ceilings.

With the age, price and mileage you're looking for, the main consideration is the history of the car. Try to find something with good maintenance records that you can tell was taken care of. That will go a long way to achieving the reliability you desire. Some of the suggestions that have been made might work. The HHR is a posibility as is the Mazda6 wagon (but hard to find). You should also consider a minivan. That's basicly what you have described - "room for two car seats and a booster seat" "room for a small/medium dog cage in the back plus luggage" "20 mpg or better in the city". This all screams minivan. I know some people attach a stigma to minivans, but for a family, they can't be beat. I had one from '89 to '95 when my kids were little (1 & 7 to 7 & 14) and we loved it. And this was before they had doors on both sides. We would make 12 hour road trips and I would get out feeling great. There are Honda and Toyota vans on the high end of your mileage limit to be found, as are the Dodge/Chrysler vans. The thing about the minivans is they tend to be cheaper than the SUV/CUVs because of demand. Happy Hunting

Don't get hung up on MPG, if you need a large vehicle for errands and occassional long trips, get a van. Our Caravan has served us well, however I do the brake work and made sure it was a base model (minimal electronics).

This is a tough one. Is the problem with the Civic because at least one seat is rear-facing? Two forward-facing seats plus a booster should be fine. I drove a Mazda Protege5 so outfitted for years.

The issues with the Mazda5 tend to involve the suspension--check the problems pages on the site--and possibly rust. The engine and transmission tend to be reliable. Those 2010 and up are more reliable, but also probably too expensive.

Kia offered the similarly sized Rondo for a few years. The Rondo also had 2-3-2 (with the third row optional, they don't all have one) rather than 2-2-2 seating, but it didn't handle as nimbly as the Mazda. We have just a small amount of reliability data on these. What we have suggests that the 2009 is more reliable than the 2008 which is more reliable than the 2007, which could be pretty bad. The most common engine repair appears to be ignition coils, which aren't expensive. A few owners with the V6 engine also report that the oil pan rusted out.

Among two-row vehicles, the Hyundai Elantra Touring is larger than most. It was marketed as a wagon in Europe. Reliability has been so-so, but few of the reported repairs involve the engine or transmission. Mostly minor stuff. Could be a very good fit if you can find one in your price range. Might be too new.

With larger minivans, you'll have to make a tradeoff between a newer Dodge / Chrysler and an older Honda or Toyota. The Japanese minivans probably only fall within your budget with a lot of years and/or miles. 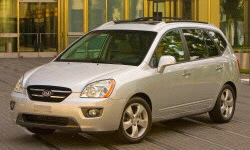