is bmw i3 REX reliable?

In this case I am going by Consumer Reports As True Delta does not have data on this car.

According to Consumer Reports, this is not a very reliable battery powered car. In 2014 the first year of production there were problems with the drive system (power train), Electical system, climate system, squeaks and creaks are the norm, and in car electroincs cause some concerns.

In 2015 things got worse. All of the above still holds true, and the added issue of power equipment was a problem.

In 2016, problems are reduced to only some minior drive system issues and squeaks and creaks (body integrity according to CU).

In 2017, CU did not get enough results to give a survey either.

My two cents - stay away. You are better off with the Toyota Pirus, Chevy Volt or Bolt. The Volt has been hit or miss, with the years 2013, 2015, and 2017 being more reliable. Bolt has been fine. Prius has more cargo space and is a little more reliable, but you cannot get in only electric.

You may be told about the Tesla Model 3 but note it is back ordered over a year and the only model they are making right now is the loaded one - which is over $60,000. The only electric car on the market that is reliable, available, and with over 200 miles range is the Bolt. The Nissan Leaf if also a decent car but it has less range (about 140 miles). 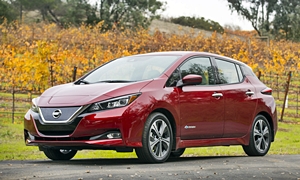 Yikes; my son-in-law just got an I3 -- contrary to my advice! It is a nice, unique car but rather unusual in many ways & quite complex. Not to mention $$$

AcuraT's advice is sound as usual - with the caveat that you won't be able to get the star of current EVs, the Bolt, for $20K.

What sort of range you are looking for and how long do you plan to keep this car?

If a 100 mile range is adequate for you, both the VW E Golf or Kia Soul EV get excellent reviews and are very nice, comfortable, reliable cars. The Leaf is also good and reliable but a notch below the above two in overall refinement. So far battery longevity has not been much of an issue except for a few pre 2014 Leafs. There are many of all the above coming off 2-3 year leases at a fraction of their initial cost. Here in Seattle you can get these for $11,000 (Leaf)- $17,000 with less than 30,000 miles. Notably, these EVs have fewer issues than their gas powered stablemates.

Another very attractive option is to lease a new Kia Soul EV. https://www.carsdirect.com/2018/kia/soul

Many (a sizable majority it seems) EV buyers do lease due to the rapid changes in EVs and their associated horrible resale value.

The BMW probably will not be reliable and is a very weird and impractical car. You are better off going with a Kia Soul EV or VW Golf. You may like the LEAF, but owner satisfaction has been mixed. I usually don't like giving advice based off of people I know liking or disliking their cars, but I have two co-workers that had the 1st gen LEAF and they both got half the advertised EV range. They both sold them.

EVs depreciate so quickly so you can find a slightly used one for 30% off MSRP. However, for around $20k I would consider a new 2018 Nissan LEAF with the rebates. It will get you to around $22k and it is a much better car than the old one. The Golf EV is my next suggestions for the money. It gets has a farther range than most EVs and it handles like a Golf.

The Kia Soul is the most practical one and is available with many features that are found in luxury cars.

You could wait until the end of the year for a Standard Range Model 3 and hope they still have the tax rebates (they probably won't). It'll come in at $25k after them.