Even mix of city and highway driving - more rear passenger seat room will be needed for the pair of vertically-expanding spawn; I want some power and decent handling. Driver two holds rear parking sensor (or rear camera) and passenger safety in high priority. A bit ( not too much) of ride harshness in favor of better handling is ok.

Not too many limiting requirements....just drive a bunch of stuff and buy what you and driver 2 like the most.

I would take a look at the 2014 Acura MDX. Plenty of room, great handling (especially with the SH-AWD) and 0-60 in the low 6-second range. High safety scores and as reliable as an anvil!

I like how the current MDX handles more than any other three-row crossover. The 2014 had some problems initially, but has improved.

The new Kia Sorento isn't as large or as roomy as the Acura, and doesn't handle quite as well, but is still a surprisingly good vehicle for its significantly lower price. Reliability could be a bit of a gamble. While Kia should eventually get it sorted out, and might have already, initial reliability data haven't been good.

A third possibility among three-row crossovers: Mazda is about to introduce an all-new CX-9. I haven't driven one yet, but I like how other Mazdas drive. Reliability is unknown, though other current Mazdas have been very reliable.

You might not want something as big as a three-row crossover, though. The current Volkswagen GTI has a much roomier rear seat than many people expect, and is quite fun to drive. I also like the Mazda3 hatchback, but it's less powerful and has less interior space, but is more likely to be reliable. The 2015 GTI has been good so far in our survey, but it's early, and if you might have the car for more than four years the VW is more of a risk.

Want something in between the GTI and the others in size and handling? Then the Subaru Forester XT is probably your best bet.

Thanks for the input. I opted for the 2016 bmw 328xi Gran Turismo. I've had an affinity for BMWs as is evidenced by owning two previous ones. The handling does not compare to my 2011 E92 bmw coupe, as the steering seems too light, but there was more of a connectedness to the road than I expected for larger, higher off the ground vehicle. I was guided by M. Karesh's review of the 2014 bmw 328xi Gran Turismo on this website. 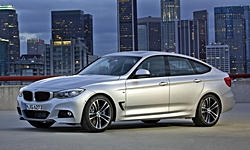 Happy you found this solution on your own. I'm kicking myself for not suggesting the 3 GT earlier. It's a great fit for the priorities you posted. It might not handle as well as your coupe, but it handles far better than any crossover.

The 328 xi GT is definitely one of the more underappreciated BMWs. My best friend recently leased a 2015 428i xDrive Coupe and I was discussing the 328 GT with the salesman. He told me that few people came in intending to get one, but after they drove it and saw the virtues over a 3-series sedan, they usually left in a GT. He said the same was true, to a lesser extent, of the 4-series. A lot of would-be Coupe buyers choose the 4-series Gran Coupe (my favorite) instead.

Congrats and glad you found what you wanted! Enjoy!