I'm in the market for a car for work. Current favorite is the Ford Focus SVT, ideally with EAP package. I have found clean examples with low miles (under 80k) for $6500. However they are rare. I can't think of anything with a comparable value in this price range. Any thoughts on cars I'm over looking? It has to be manual and it has to be fun to drive. Thanks, Jordan.

I have heard the SVT can be finnicky, though we don't have enough owners participating with them for me to back this up (or refute it) with data.

The newer Focus ST should be more reliable, but has a plainer interior and exterior and was only offered as a sedan. Similar suspension tuning as the SVT, larger engine with same peak hp. Probably less likely to have been abused. Could be worth a look.

The most reliable (but also least attractive?) generation of the Focus was the 2008-2011. The SES trim (look for dark alloy wheels) can be fun to drive, and it might be possible to find one with fewer than 100k miles within your budget.

Judging from a quick search, other sport compacts will have over 100k miles if within your budget. If you can find a Mitsubishi Lancer Ralliart (2003-2007) or GTS (2008- ) within your price range and without too many miles, it could also be worth a look. 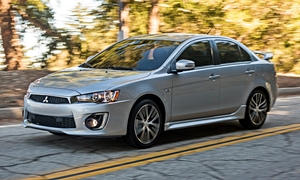