Replacing 2007 Honda Fit- terrific reliablity but no power or size- with an SUV. Want to be able to tow a 3500 pound boat, have all wheel or 4 wheel drive for Montreal winters and light off roading (cottage roads and poorly mantained roads), full luxury features (premium stereo, leather heated seats, padded arm rests, panoramic sunroof). No kids, just wife and dog but looking for a vehicle that is comfortable for long road trips. Requires ablity to accelerate up to hiway speeds and pass confidently at hiway speeds. Not very concerned about mileage, would prefer to avoid premium fuel but not critical. Would like 6-7 passenger seating so it might be realistic to camp out in the vehicle on long road trips or haul my in laws around.

Looked at Mercedes GLK 350 (small but fast and luxury), Audi Q5 V6 and Diesel, Ford Explorer Sport, Dodge Durango, Jeep Grand Cherokee. Love Hondas but feel all their trucks are painfully out of date at this time and CRV engine not powerful enough. New MDX unappealing and RDX can't tow.

IMHO the Grand Cherokee is the best bang for the buck. For towing, I'd get the V8 engine, Overland trim. Lots of luxury, towing and weather capability for under $50K. Reliability is on a par with MB, Audi. If towing and space are the primary drivers, there is also the new Chevrolet Tahoe (GMC Yukon), just re-engineered this year for about $58K. 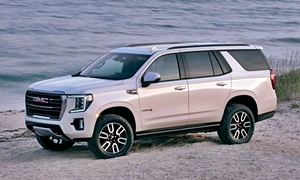 I'll definitely second the vote for the Jeep Grand Cherokee Overland. It's an all around excellent SUV.

The Dodge Durango is another good choice and, as with the Jeep, you have the option of upgrading to the 5.7L HEMI for towing and PLENTY of power for any other situation.

One other idea might be the Hyundai Santa Fe Limited. It can tow up to 5,000lbs and it's priced around $41k for the AWD version with the 'Ultimate Package'. That includes panoramic sunroof, Xenon headlights, ventilated front seats, heated steering wheel and 2nd row seats, 2nd row captains chairs, Nav, 12spkr Infinity Logic Surround Sound and everything else you can think of. It also has the awesome 10yr/100k Powertrain Warranty. An added bonus, IMO, is that you can also get it with GORGEOUS Saddle Brown interior paired with White, Black or Iron Front (Gray) exterior. It looks like a $50k+ vehicle so equipped.

Thanks for the votes on Jeep GC. I actually do like it quite a bit- although I am in Canada and the pricing is about 10K higher per car here- the Overland starts at 61K before adding our generous provincial and federal taxes (6-8K). The limited optioned up with the Hemi was around 55K. When I checked out the reliability stats it looked a bit cautionary for a car near the absolute top of my purchase window.

I also agree on the appeal of the Hyundai's saddle interior but a caution from Car and Driver that the seats started squeaking early into their road test concerns me.

I have the 05 Suburban & only way I can replace it is with another, as per the wife. We have almost 140k miles & only a few small problems I fixed myself. Its very comfortable on the road with tons of room, decent mpg for its size, usually 21+ mpg on highway towing or not. Its not great offroad but not bad. with good set of tires & rear selectable locker it would be fine for some real wheeling. Truck has plenty of power to get out of the way of almost anything with the 5.3.
The Ford Expedition EL would very simular to the Suburban/Yukon XL but I have no experience with one to talk about. The Durango is a lot smaller but ive heard good things until you get around 100k on the clock.
A diesel in any of these would be great but none have that option available as of yet. 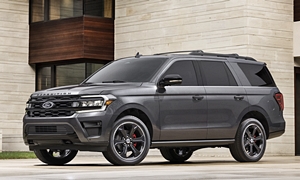 The Tahoe and Expedition are much larger than the others. I'm driving a 2015 Tahoe this week, and it's HUGE. Which some people really like, but my wife refuses to even drive it. The main benefit is that the interior is very wide.

Reliability for the Grand Cherokee and Durango should be fine once they get the bugs in the new infotainment system sorted out. It's the cause of most of the problems reported through our survey. And it's somehow connected to everything: audio, hvac, even stability control. They might have fixed this for the ones being produced recently--I just don't know. The dealer might. They are very good vehicles otherwise--a matter of whether you want the Jeep's additional off-road capabilities or the Dodge's third row and additional length.

If you're concerned about long-term reliability, I'd avoid an air suspension in any SUV you buy. It's common in the top-of-the-range Jeeps. These are often troublesome in Jeeps, BMWs, and Mercedes.

For size the Mercedes ML seems a better fit than the GLK. But out of your price range? The Q5 also seems marginal.

The advantage of the Santa Fe is that it drives the most like a car. It feels lower and less massive than the Jeep and Explorer, and even than a Toyota Highlander. Problems tend to be minor, trim and rattles and such. It's not nearly as torquey as a Jeep V8. So if it's engine is sufficient, then regular V6s might also be adequate in the Jeep, Dodge, and Ford (though they are heavier than the Hyundai).

Another is the Toyota 4Runner. Great reliability and off-road capability, not so good ride and handling, marginal power.

The main thing against the Explorer is that many people don't like how massive it feels from the driver seat. The pillars are huge, and in general it seems sized for giants. The Ford infotainment interface is another source of criticism, but I personally don't mind it much. They keep tweaking it.

If you drive the Explorer and really like it, then it could be a good way to go.

Overall, though, the Jeep or Dodge seems your best bet--once they sort those bugs out. Normally I'd recommend the V6, but since you'll be towing the V8 could be warranted. With the Durango the V8 is also the only way to get a two-speed transfer case.

Realistically I'm looking at towing a smaller bayiner deck boat- if I get one- so 5000 pounds towing should be plenty.

I like the Tourag TDI but for the features I'd like to have it is around 70K in Canada.

My other small consideration is that, in Quebec, you pay an additional vehicvle registration penalty in increments for every engine litre over 3.8- so the Chrysler 5.7 hemi is in the highest category costing an extra $220 or soemthing for vehicle registration, on top of poor mid grade mileage.

I imagine all of these will feel huge given my last eight years have been in a Fit.

Thanks for all the feedback so far, going to test drive

If I like the Tourag well enough, could see about fitting it in mileage and tourque are great.