i want it all

Have you test driven any contenders yet? If so, what did you like and dislike? Even if not, which cars do you find attractive, and which have you enjoyed driving in the past? Knowing this would help narrow the field.

As is, few new cars feel insubstantial, and we seem to receive significantly fewer rattle complaints than we did even a few years ago.

A Buick Regal feels very substantial and is very quiet, and the suspension of the GS is quite firm.A Ford Fusion similarly has a European feel, but for a little less money.

A Cadillac ATS with the features you want likely lists for over $40,000, but dealers could be discounting them significantly.

Among Japanese cars, an Acura TL SH-AWD might deliver what you're looking for (though Acuras seem more prone to rattles than most luxury cars). Or maybe a Lexus IS 350. But $40,000 would likely mean no nav on the former and no options at all on the latter. A leftover Infiniti G37 might be a good value play.

Among European cars, the new 2015 Audi A3 would probably include the most features for a price under $40,000 while delivering the driving experience you seek. 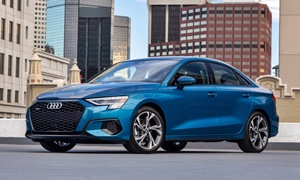 I've driven 12 cars in past 2 weeks and have great offer on
Volvo S 60, which is my new benchmark.
Lexus IS was fabulous, but lease terms too high for me; better offer on Audi A4.

I'm going to wait until new Acura TLX arrives in August and then make final decision.

I'm driving a Volvo V60 with the Sport Package this week, and meant to include the S60 among the suggested cars earlier. The main thing that held me back is that the ride can get noisy on concrete highways. The well-worn 19-inch performance tires on the tested car might be a factor. But be sure to drive any car you're considering on a concrete highway if quietness is a priority.

The A3 is very new, so I wouldn't be surprised if lease payments were better on the larger A4.

My main concerns with the TLX would be a high lease payment, since it'll be brand new, and possibly rattles, as Acura might need a year (or more) to engineer them out if the past is any indication.