currently have an S4 - LOVE it but no room for people in the back when going out with friends.
considering Jag XF (supercharged 3.0 w/ AWD) and BMW 535 M Sport Package

any help and thoughts

Have you driven the cars? They feel quite different. Any personal preferences between them?

The current 5 feels too large and heavy to me personally, but it might have more back seat room than the Jaguar. I was impressed by the power and fuel economy of the diesel.

My main reservation with the Jaguar, which can be more engaging than the BMW, is that a much improved, all-aluminum second-generation XF arrives in the fourth quarter of this year. If you can wait that long, it could be a fantastic car. But it will then also be an all-new Jaguar in its first year.

The Infiniti Q70 might also be worth considering. For 2015 they added a long wheelbase model. The view forward is an acquired taste--the A-pillar is unusually far inboard. Gives the car a bit of a sports car feel, but also impacts perceived roominess. Also the chassis isn't as well-tuned as the others.

I don't know if you're open to a Hyundai, but the second-generation Genesis is a surprisingly good car, has been very reliable so far in our survey, and will cost far less than the others. The main downside: its V6 engine isn't as powerful or as efficient as the boosted engines in the Jaguar and BMW. 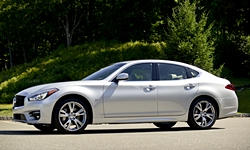