I currently have a 2012 Accord EX manual. I enjoy the 5-speed and the overall ride/handling balance, plus its roominess. But the driver's seat is absolutely awful. I've had custom upholstery work done on it (twice) and have tried a number of different cushions. No dice. At my age (mid-30s) and being in good health, it shouldn't hurt this much to drive.

I'd like a much more comfortable midsize sedan, and I want to stay away from near-luxury or luxury models. I just prefer mainstream products.

I think the 2014 Passat Wolfsburg edition is pretty close but the seat bottom won't tilt for thigh support. I like its simple, anonymous styling, both inside and out. I like that it comes with smaller 16" wheels; most everything with heated leather seats force you to put up with 18" and larger wheels. I will probably drive this again because it's as close as I've been able to come to the right car.

I'd consider a Buick Verano or a Ford Fusion, but both are a little too flashy for my tastes. See--I really want to keep it toned-down!

A new Altima is supposed to have nice seats, and be fairly quiet, but it seems like there are a lot of reliability problems still.

I've owned Subarus before, but didn't end up feeling that the AWD mattered that much, and the poor stereo systems and cheap seating materials got old fast.

I had a 2007 Volvo S80 before this and it really spoiled me for seat comfort. But once that car hit 100k miles, I could tell things were going to get expensive, and I didn't feel like the premium trim of the car suited me.

Love this site, and look forward to any suggestions.

Seat comfort is very subjective. There really is no substitute to spending as much time as possible sitting in the car.

Do you also want a manual transmission in the new car?

The Passat Wolfsburg's seats are probably vinyl, not leather, in case this matters. You can't get a manual in the Wolfsburg, but you can get one in the 1.8T Sport. If you want a manual and heated seats, there might be no other options in this price range.

The Verano is actually a compact. The Regal is more of a midsize sedan. Personally I found the Regal's seats nothing special, but you might like them. You can get a manual with heated seats in either Buick, though unlike elsewhere ONLY with the highest trim levels.

Given your tastes, you might want to check out the Chevrolet Malibu. Very smooth and quiet. We don't have reliability information on the current generation. Most likely it's about average. No manual transmission is offered.

The Hyundai Sonata has been substantially refined for 2015, and now has a feel similar to the Passat's. Its styling has also been toned down. A manual transmission is no longer offered.

I personally also like the seats in the Ford Focus and Ford Fusion. The former makes the most sense if you'd like to get a manual again, as the automatic transmission tends to be a source of complaints, if not outright reliability issues. Members recently report getting extremely good deals on the 2014 Focus, $7,000 and up off MSRP. If you can find a dealer with a Focus SE with manual transmission and heated seats (which can be ordered with cloth), it might be possible to buy this car for as little as $13,000. Add $2,000 for leather, which is included in an Appearance Package that also bundles a number of other features.

It might also be possible to get a very good deal on the Fusion. I know the styling is a bit much for your taste, but these are solid, comfortable cars. There might still be some 2014 SE manuals on dealer lots, and if so the dealer should be very eager to sell. The manual is no longer offered with the 2015s. 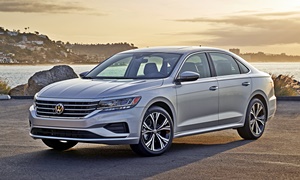