I highly recommend you look at the Kia Sorento. Very comfortable, rides well. Good amount of room in front, a little short on leg room for the backseat. Has third row too, but I've had it down since I drove it off the lot.

I can recommend the Mazda CX-5. We have a 2014 Grand Touring All Wheel Drive that we purchased new for my wife a few years ago. We test drove the Kia Sorento, the Honda CRV EXL and found the Mazda best met our needs. The interior is very nice and the leather is wearing well with well over 40,000 miles on it. It get's 25-28 MPG in mixed use. The storage is ample. While appearance is a subjective matter, I think it's one o the best looking CUVs on the road. The biggest thing that sold my wife (and me) on the CX-5 was the handling. This thing has to be the best handling CUV this side of a Porsche Macan/Cayenne. It just loves to go around turns and makes you feel totaly in control. And amazingly, it doesn't sacrifice ride quality to do it. I know what a good handling car feels like as I'm a former Miata driver and current driver of a Porsche to work every day. The CX-5 not all mushy like a Toyota RAV-4, but it's ride is not at all punishing. It's a very comfortable car. We have made 8+ hour trips in it and feel good afterward. My wife commutes 60 miles round trip to work every day in it and enjoys the car. So far it has been trouble free, requiring only routine maintenance.

Have you considered a RAV4 Hybrid? Should meet the MPG criteria!

The RAV4 hybrid has good mpg, but style and comfort are debatable.

I really like how the new Kia Sorento looks and drives, so I'd also suggest checking it out. You can find my review under the model's photo in the above comment. My concern: initial reliability data aren't good. It might be best to wait for the 2017 on this one, or at least get one produced recently rather than during calendar year 2015.

The Mazda CX-5 handles better than most and has been reliable. It won't feel as upscale as a Lexus or Audi, but then it also costs a lot less. The near-future Mazda CX-9 should feel more upscale than the CX-5, and has earned EPA ratings of 22/28. Since no one has one yet, reliability is unknown.

I haven't yet driven the new Lexus RX. I wasn't a fan of the previous one, it just wasn't especially good at anything other than reliability. Fuel economy only tends to be good with the hybrid.

The Audi Q5 had excellent fuel economy with the TDI. You can't buy a new TDI at the moment, but you might be able to find a used one. For me seat comfort was just okay.

Among largish SUVs, I've most liked the handling of the current Acura MDX. Though these were glitchy initially, they've been reliable recently. Note, though, that the 2016 has a nine-speed transmission many owners have been complaining about in other car models. It might not be a bad idea to avoid this transmission by finding a 2015. Then again, people at ZF, Acura, Chrysler, and others must be working around the clock to sort out its issues, so these will likely be resolved soon if they haven't been already.

Finally, you might want to look at the new Volvo XC90. Very stylish, very comfortable, and good fuel economy. The concern is again reliability, as this is an all-new design in its first year. I compared the Volvo and Acura in my review of the former, linked beneath its photo. 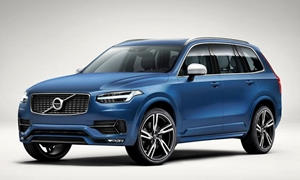 Thanks to all who responded. These are terrific suggestions and observations. We aren't spontaneous purchasers and will generally take more time than the average. We will certainly pull the trigger before end of the year. Once done I'll update all on our decision. Since this is my wife's car, she has already rulled out the smaller SUV/crossovers such as Honda and Toyota which are excellent vehicles but too small according to her. As the year progressses, please feel free to add more experience, observations or suggestions. Thanks again.

It's Sept 2016 and my wife decided to purchase a 2016 Lexus RX350. We drove the Mazda CX5, BMW, X3, MB CLE, Acura RDX, Audi Q5, Hyundai Sata Fe, Buick Envision and Cadillac XT5. Personally, I thought the Mazda CX5 was the bestof the group--but this is my wife's car and my opinion doesn't count!!She liked the Cadillac and Lexus best. During the final test drives, the Cadillac CUE system seemed torequire more reach and focus to operate (than the Lexus info system) andthus less attention to driving. The German info systems, in my opinion, were the easiest to use and most advanced. In addition, during the final test drive, the Cadillac had an electronic glitch in the panoramic roof----not a good sign since it's a 1st year model for GM.

I was going to say that Car & Driver had the Buick Envision Premium ll quieter than the Lexus RX in their testing. The Lexus RX handling is an acquired taste and is the front end styling.