Looking at a preowned sedan that has some performance aspects to it yet realiable enough to make it to 120k miles. I drive 110 miles a day for work in NJ.

Price range is between 15/25k. Plan on keeping for two years and will put on 50k in two years miles wise.

Any input is very much appreciated! Thanks in advance.

Ive considered a Tesla Model S but my concern is part availability if repairs are needed. I've heard horror stories of months without a car after an accident.

The Q50 is probably the best handling car on your list and is a shockingly great buy. I'm shocked that many Premiums are in my area for under $25k. I think it's a good price. Reliability has been so-so mainly with the infotainment system crashing. The engine is tried and true so I've heard.

That and the Lexus GS are the only two performance sedans on your list (besides the Tesla). A 2013 GS is out of the budget unless you get a basic one.

For sure skip the Chrysler 200 S and C. They are discontinued and have too many problems to list reliability and enjoyment wise. The Hyundai Azera is a nice car, but is the opposite of performance. It's about as sporty as my mom's 2017 Toyota Avalon Hybrid.

The Genesis is also a great car, but it doesn't have the handling of the Q50. Personally I would take it over the Q50 since I like a comfier ride. It's a good mix of comfort and relatively good handling, but it is more tuned to comfort.

I've heard the Malibu's handling is OK, but nothing special. It's a good car, but you won't find a lot of driving enjoyment. It isolates you from the road. The Malibu has been unreliable. Owners are having to bring in their cars with less than 10,000 miles because the engine is misfiring, throwing a CEL, and sputtering. So many different problems they are having including loss of engine power and computer replacements. Not how a new car should act.

The Honda Accord and Mazda 6 have the best handling, although the Accord is dated. I would take the Q50, Accord, or Genesis.

The Accord is the best blend of your top three priorities: Reliability, handling, and low depreciation. The 2015 Genesis however has already depreciated a lot. 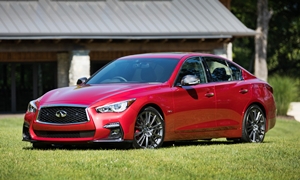 The Q50 is the worst handling car in the segment and Accord V6 doesn't hold it's value better than anyone else does. Motor Trend on the $10,000 less expensive Malibu 2.0T which quicker around their figure eight test than the Q50 or Accord V6: The 2017 Malibu lapped the figure eight in 26.3 seconds at 0.70 g lateral average and pulled 0.88 g around the skidpad. Although the2016 modelwas slightly quicker around the figure eight at 26.1 seconds, it pulled a lower average lateral g of 0.68 g and only 0.87 g around the skidpad. Motor Trend said on Q50 handling: "When driven at its limits, the Q50 is tail-happy and likes to drift. In our figure-eight testing, it put down significantly slower times than its category benchmarks. The Q50 performed a lap in 26.3 seconds at an average of 0.71 g, compared with the ATS 3.6 at 26.0 seconds at 0.71 g and theBMW335i's 25.7 seconds at 0.71 g. While the 0.6 second difference between the Infiniti and theBMWis significant, theAudi S4delivers an even slightly quicker 25.6 seconds at 0.75 g. On the streets, however, where drifting is generally off the menu and numbers don't mean as much, the Q50 still doesn't return the same level of involvement or fun as the other cars.
"Our Q50S came fromInfinitifitted with optional Direct Adaptive Steering, a full steer-by-wire system. Before you write the car off your shopping list, the system is in fact pretty decent, and that's coming from a steering snob. The computer gathers information from the motors on the rack to determine the amount of resistance in the system, and then feeds that back to the steering wheel. Since the rack can be hard-mounted, instead of on rubber bushings, Infiniti claims its system reacts more quickly than a mechanical link. The system offers different virtual steering ratios as well as different resistance maps. It's capable of providing either too fast or too slow a ratio with either too much or too little resistance, or any combination desired. MT figure-eight guru Kim Reynolds and I agree the middle settings on both are optimum. So, you're left with a costly technological solution to mimic the standard steering rack. There is one advantage, but we will get to that a little later."

"Where the Q50 needs adjustability, but doesn't offer it, is in the suspension. As we've seen on several cars in this category, a high-tech suspension package can work wonders on both handling and comfort. The magnetorheological dampers on theCadillac ATSare near magic, and I'd much rather have seen Infiniti take the resources needed for developing the steering and put them toward the suspension. In our Sport model, impacts seem a bit too severe, while the highway rebound rates seemed a little floaty.

The Malibu 2 0T literally runs rings around the Accord V6 all the while costing $10,000 less. It doesn't matter if residuals are 10% better for the Accord, because that $10K head start the Accord will never catch the Malibu in depreciation in 3, 5, or 10 years.