Looking for a vehicle that's got some power (the type that would sound good with dual exhaust) and it pretty to look at. Have had a '06 Mustang GT, various trucks, and sedans; have been looking at 1500 Silverados, Land Rover Discoverys, and Audi S4s, and the last two I have a serious concern about the maintenance component. Would like something that fits that mold, but not that repair budget.

I've got no problem going older in years (back to 2000) if I can find one that looks good and doesn't have a ton of miles.

I was actually pricing out Disco's myself for a while, so here's my 2 cents on that first:
Pre 2004, just don't.
Water pump issues, Headliner issues, the engine is from an old chrysler design in the 60's, guzzles premium, It's junk.
The 2004, same issues, but at least you get a locking diff?

The LR3's are actually pretty decent from my understanding. They have a 300hp Jaguar v8 powerplant, and sound great even with the stock exhaust, pull the intake resonator (air comes direct from the passenger fender, so would probably sound quite proper with no resonator), run your dual exhaust and go climb over some traffic jams. The reliablity issues are still there, you can't throw that many features at a vehicle and not have issues. Air bags, computer controlled braking on all 4 wheels, electronic locking diff's, etc. But it's a far sight better than the Disco II's, even though I prefer the older look more. Issue, gas mileage is still terrible.

Personally, I can't stand a dual exhaust on an automatic transmission though, so in my opinion, being tall, and in need of a dsg or manual..

Old E46 M3 (manual), just watch out for who the previous owner was, many people that can't afford the maintainence buy these and then run them into the ground.

Old CTS-V There were some issues with these (I think the wheel bearings? Can't remember exactly), but though they don't look as good as the new ones, they still sound amazing with a good exhaust, and can pack 2 adults in the back to boot.

Old WRX? No dual exhaust, but pretty reliable if you don't go crazy modding it, and still have a decent amount of power (enough to make an S3 take a breather if you only go Stage 2). 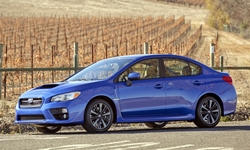 It's not easy to beat a Mustang for what you're looking for.

The weak link in the first-gen CTS-V was the rear differential. If you don't launch the car hard, you won't have this problem. Are they down to $10k?

The Hemi in a Chrysler 300C or Dodge Charger can sound quite good. Reliability is about average, but when they do break they're much cheaper to fix than something European.

I'd suggest an Infiniti G35, but suspect you need a V8 for the sound you're seeking.

You also mention the Silverado, which is a whole other category. If you want a big truck, the Cheverolet and Ford both tend to be about average in reliability.