I am looking for a reliable SUV with low maintenance costs. I would like it to have 4WD and a good pick-up, so maybe a V6.

The Toyota RAV4 Limited V6 4x4 is a perfect choice. Although it was only sold until 2012, it is a great value, has a 0-60 time in the 6 second range, and is available with 4WD. The car will last forever because it is a Toyota.

A new Honda Pilot might be good because its 0-60 time is in the 6 second range. It'll be hard finding a well equiped one for under 30000 though.

I wouldn't recomend the Subaru Forester because of reliability issues with the boxer engine.

Lectro definitely beat me to the punch on this one. The Rav4 V6 is an unbelievable little SUV. In fact, it's not really THAT little, even though it's classified as a compact SUV. The 2GR-FE engine deliver about 270 hp, and about 245 lb-ft of torque. There was little to no difference in fuel economy between the front wheel drive and four wheel drive versions because of the available torque at all RPM's. I've driven one of these, and it has PLENTY of pick up. If they made one with a manual transmission, I'd have been sold a long time ago. Toyota reliability, especially out of the Yamaha built 2GR engine that comes in it. Great 4WD system, as you would expect from Toyota, and about the best fuel economy that you'll find from a 4WD SUV as well. The catch? The Rav4 is a little bit cramped on space. Not a ton of cargo space, though there is enough if you're not going to be cramming all your belongings in the cabin. The rear seat leg room leaves a little to be desired, though the ~2012 is a far sight better than it's 90's predecessor (I know, because my wife had a 99 Rav4 for 15 years). The front is a nice place to be though. There's decent leg room from all 3 dimensions, and the seats are quite comfortable. The controls are well placed, and if you can get one with some extra trimmings, there's a fair amount of luxury available for an SUV in this segment.


That being said, it is definitely my vote as well. It may be hard to fit into your requirements from a mileage perspective, but if you did find one with low enough mileage, it would fall within your budget, even if it were loaded up with all the creature comforts available. (I recommend the sunroof btw, it's very large and open, makes the cabin feel much more roomy). Should you decide that the 2012 is a bit too dated for your liking, I would recommend taking a look at the Mazda CX-9. It uses a 4-cylinder, but it is Mazda's SkyActiv engine, which has proven to be reliable and quite a joy. It produces 250 hp and 310 lb-ft of torque. Most importantly, maximum torque is available at 2,000 rpms. It will get up and go very well, and, with the torque being available so low in the range, it will hold speed very well, making it economical. The new, is over budget, as it starts at $31k for the base, but a CX-9 that is a couple years old will be within range, and you may even be able to find a good AWD Grand Touring and remain within budget. Bear in mind that the 2015 and older has the 3.7 Liter V6, and not the turbocharged 4-cylinder like the new one. The V6 is not a downgrade by any means though. It still has plenty of pep with 273 hp and 270 lb-ft of torque, and the Grand Touring gets 321 hp. You may not see the same fuel economy however, though it certainly isn't terrible at 24 mpg highway. Hope that helps!

I would recommend a Toyota 4Runner. Reliable, low maintenance, V6, roll down rear window, 4wd to take you anywhere you need to go. if you want something smaller and a little more efficient I'd suggest a CX5. Mazda makes decent vehicles and they def have some zoom zoom especially the CX5 with the 2.5.

The 4runner though seems to fit your bill. It is not a speed demon but it doesn't feel under powered and can get out of its own way if need be. The drive train is older but tried and true and the body in frame is rugged. They do hold their value which sucks when buying used. MPG isn't stellar, but it's not another one of those CUVs.

I'd skip the V6 and go 2.0T. A 2016 Buick Envision Premium l can be had for your budget offers 250 horsepower, 30+ mpg on the highway, very good crash standards of today, and a true AWD that will send power in a single wheel with traction while the others are spinning. This AWD tech is knly offered in the MDX, new Acadia, most German suvs costing twice as much. 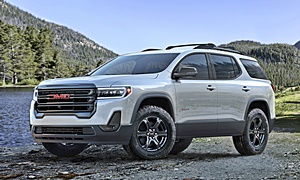