SUV with safety forefront to protect my baby

Has to be safe! Pregnant wife, this will be our family hauler.

Style and features are important, I want a nice ride to replace the dinky Hoondai I've had for ten years. I want an SUV that will be my ride for 15 years or more, so to splurge a bit now is ok if I can get something nice for the long term.

I will only buy used.

If you want something that'll last 15 years while being reliable, I definitely don't recommend something European. I would recommend an Acura MDX, but they are above your price range. Pretty much anything you can buy new these days will be safe, so that's not too limiting.

Does it have to be an SUV? The TSX is a reliable wagon that comes in under your budget.


I had avoided Acura because I hate that hideous grill. However, I took a good look last night. I'm a little upset that Acura keeps all it's best features for the RLX. Like the second screen and the accident avoidance systems.

The same model year interior MDX and RDX looks years older than the RLX. Too bad.

I've owned many SUV's over the years, but my current 2013 Acura MDX is perhaps the only one I'd consider keeping for 10+ years - and I believe it meets your criteria very closely. I'd focus on the final 3 years of the 2nd Generation MDX - 2011-2013 years. Find one without the Advanced package (higher maintenance costs for the active suspension) but with the Tech and Entertainment packages. My local dealer (Sunnyside in Southern NH) always has an inventory of these with low miles in a price range as you've indicated - all being Acura Certified - so I believe that the car fits your cost constraints.

What I like about the 2nd gen MDX is that it has a bulletproof 3.7L V6 without the cylinder de-activation that many of the current Hondas have (so less problematic), it has the simply amazing SH-AWD system that is hands down the best AWD I've ever had in NH winters, and it drives /handles almost as nice as my wife's '12 Acura TL SH-AWD (same drivetrain). It will seat 7 and has decent rear-seat flexibility depending on the configuration you want to use.

Though TrueDelta will have the real specs on long term reliability, I'll second willied's opinion that anything European is not likely to be reliable fifteen years out. I'll also note that SUV doesn't necessarily suggest safe, indeed with a young family today I would be looking at offerings with the newer safety technologies: lane departure warning, front collision detection, etc.

I'd look at a Toyota Highlander, loaded Subaru Outbacks with the 3.6 engine, Acura RDX, and a Buick Enclave or its counterparts.

I see Acura coming up a lot in the responses, and I hate the grill too: but your criteria did not include "nice grill". :) Otherwise, they meet your needs...

Fifteen years is a long time, especially if the vehicle is already three years old at the start. As others have said, anything European usually gets expensive well before that point. If you really are going to hold on to a vehicle until it is 18+ years old, it's hard to argue against an Acura/Honda or Lexus/Toyota.

Toyotas might be ruled out by crash test scores--they haven't been doing great on the new small overlap test. This is mostly a concern if you frequently drive on two-lane roads at fairly high speeds.

I really like the new Acura MDX, but it's well over you price limit since it's new. The old one is a little dated, but still might be the closest fit for what you're looking for.

One quasi-SUV that might work for you is the Honda Crosstour, which is essentially a tall Accord hatchback. The 2013 picked up some additional safety features, including forward collision alert, lane departure warning, and a passenger side rearview camera.

You're probably over Hyundais by now. And I'm not sure how well the latest ones will go 15-18 years. (They're certainly better than ten years ago.) But with a Santa Fe you'd at least have 10/100 coverage on the powertrain, and the 2013 is fairly luxurious. But it doesn't have as many safety features as the Crosstour.

Subarus tend to be reliable up to about 100,000 miles. After that point past generations have tended to get a little expensive to keep up. The new ones could be better--no head gasket issues would be a good start--but it's far too soon to say with any certainty.

Otherwise, a Subaru Forester could be a very good fit. Extensive safety features that tested well, even in the small overlap test. The only negatives with it are styling (which some people are okay with) and little sense of luxury.

Same with the 2010-2014 Outback.The 2015 Outback could be much more luxurious, I haven't been inside one yet. A loaded new one could be over your cap.

A few comments on Tom's suggestions:

The large GM crossovers (including the Enclave) have a poor reliability record.

The RDX is a nice vehicle, but doesn't have many electronic safety aids.

The Highlander should also check off most boxes, but didn't do well in the small overlap test mentioned above. To be fair, some of the other vehicles discussed here haven't yet been tested, and could do no better, or even worse. The Kia Sorento, related to the Santa Fe, received a "poor" rating in this particular test. 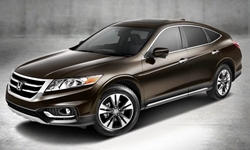 Thanks so much for all the recommendations. Maybe I should rethink about how long it will last, I love the appointments of the 2012-14 ML350, AND the preventative collision is the best; lane keeping, Distronic Cruise Control with full stop, drowsiness alert. Those features are exactly what I want including that fact that 2012 and 2013 are top safety picks. But everyone thinks MBs are crap now, which is really unexpected for what I thought was such a reputable brand. I thought they were 200Kers for sure. I know they used to be.

The latest generation of the M-Class does seem to be more reliable than the previous ones so far, but it's far too early to predict how they'll hold up for 15+ years.

The XC90 is a very old design, dating to 2003 IIRC and finally about to be redesigned. The XC60 is much more up-to-date. My concern there is that the Volvos from the early 2000s have been horrific in our stats. Otherwise the XC60 is a very nice vehicle. My wife LOVED it. 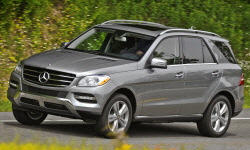 I've decided to get an Acura MDX.

Thanks, you guys convinced me to look into them and from everything I've read they could last forever with propoer maintenance and they are top picks by IIHS, which are my two biggest concerns.

Awesome! Glad to help. I hope it treats you well!